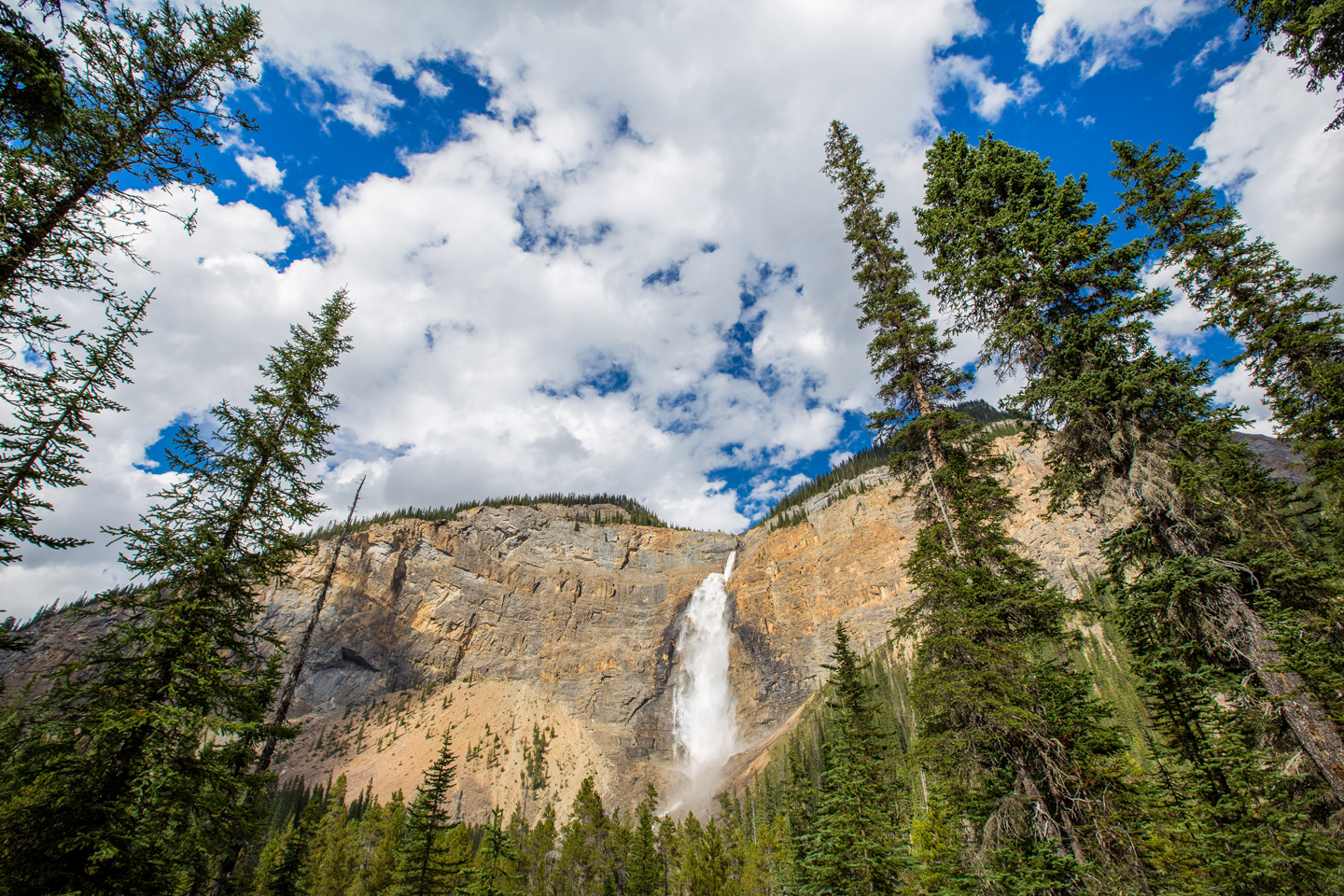 Fresh off an awesome hike to the Plain of Six Glaciers, we still had several hours of sunlight left to explore the area before sunset. Julie had come across Takakkaw Falls while researching the trip, and suggested a quick visit to fill in the rest of our afternoon. While not an original part of our trip plans, we decided to make our way to nearby Yoho National Park to explore. 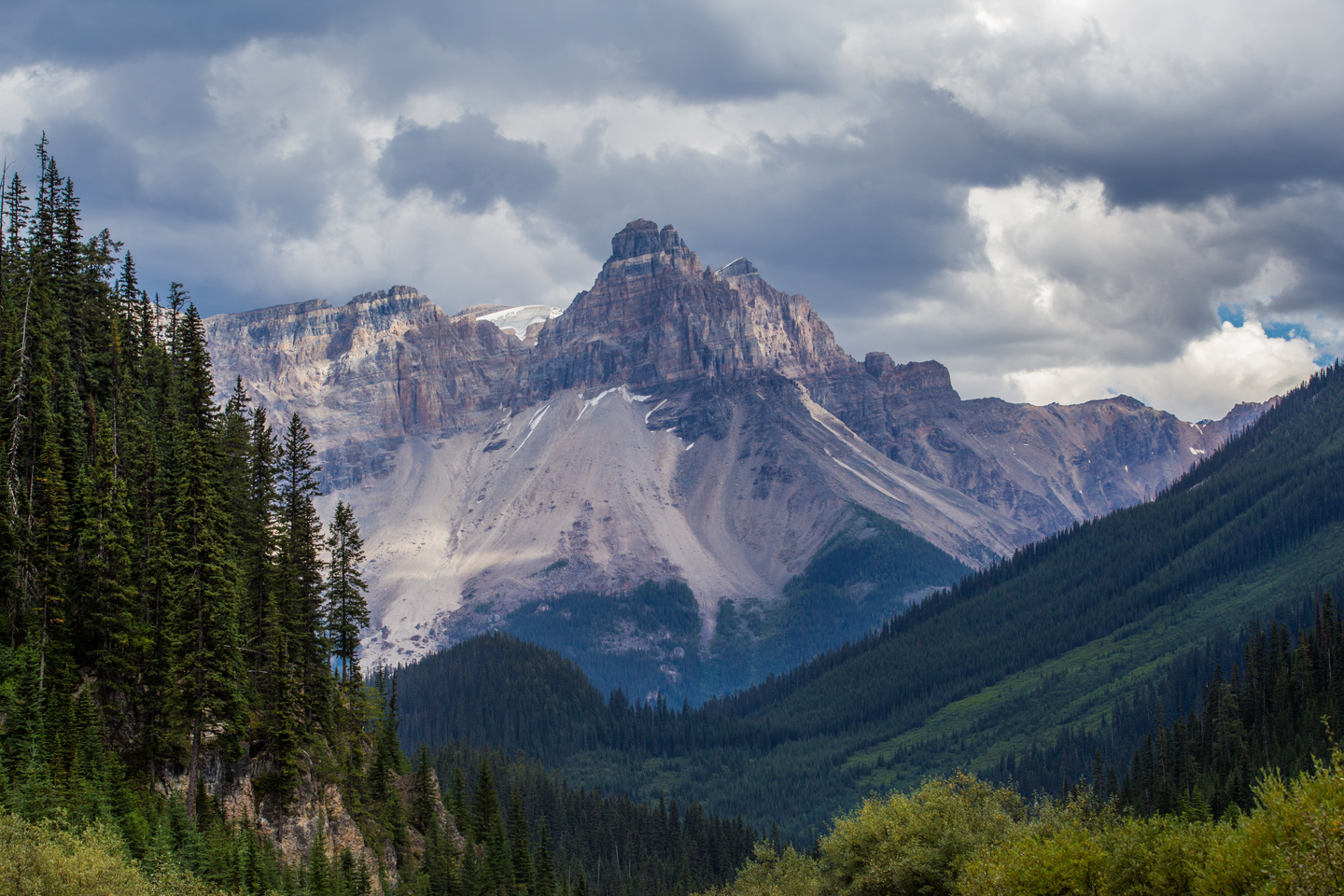 One of the best things about the Rocky Mountain region of Canada is the access to a variety of national parks within a relatively short distance. From Lake Louise in Banff, we made just a thirty minute drive to Yoho National Park in British Columbia. After jumping off the Trans-Canada Highway, we made our way along Yoho Valley Road which curves through stunning pine trees as we headed for the falls. Immediately, we realized this excursion was going to be a great addition to our trip. 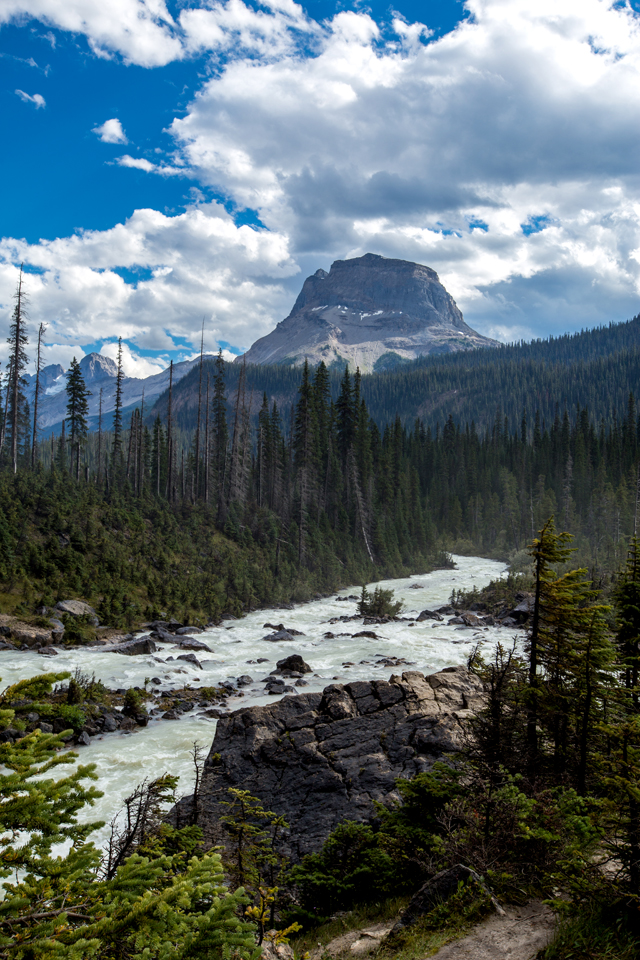 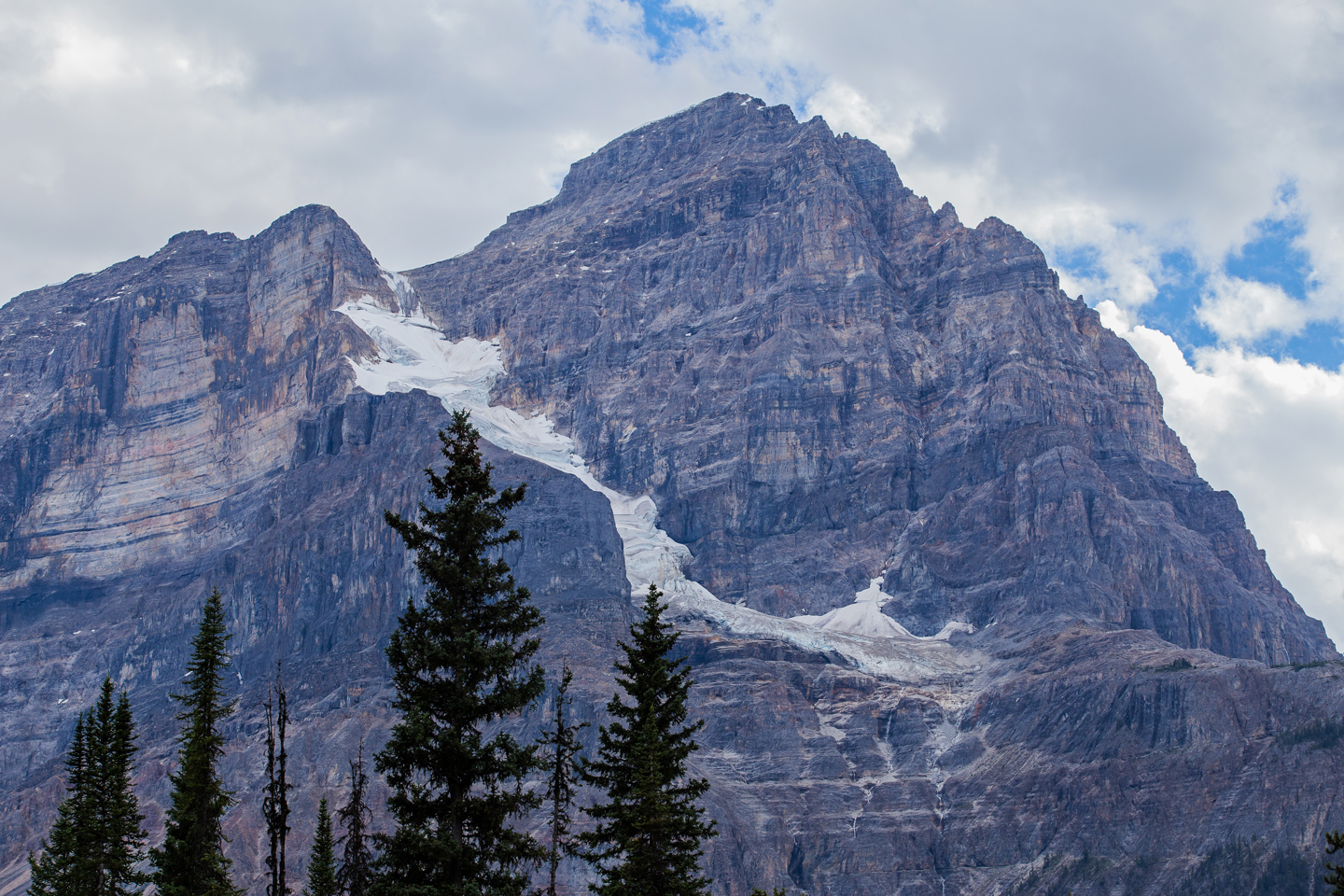 As we continued along the road, Takakkaw Falls begin to come into view and it is definitely a sight to behold. We arrived later in the afternoon to a rather un-crowded parking lot, which was a welcome treat! Having recently completed a long hike, on a warm day, we opted to leave our jackets in the car and made the short walk across a small bridge and back to the falls. 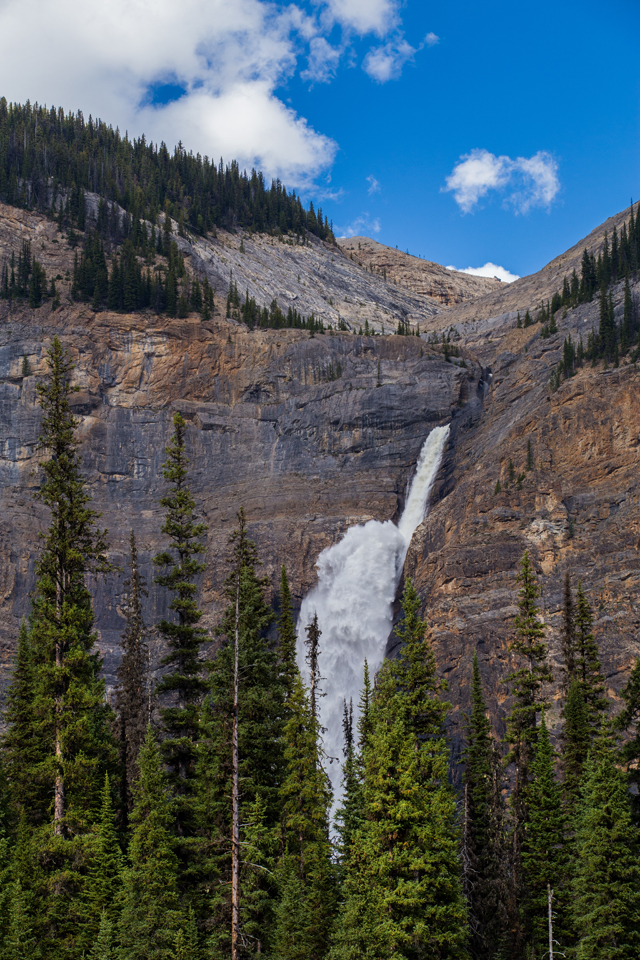 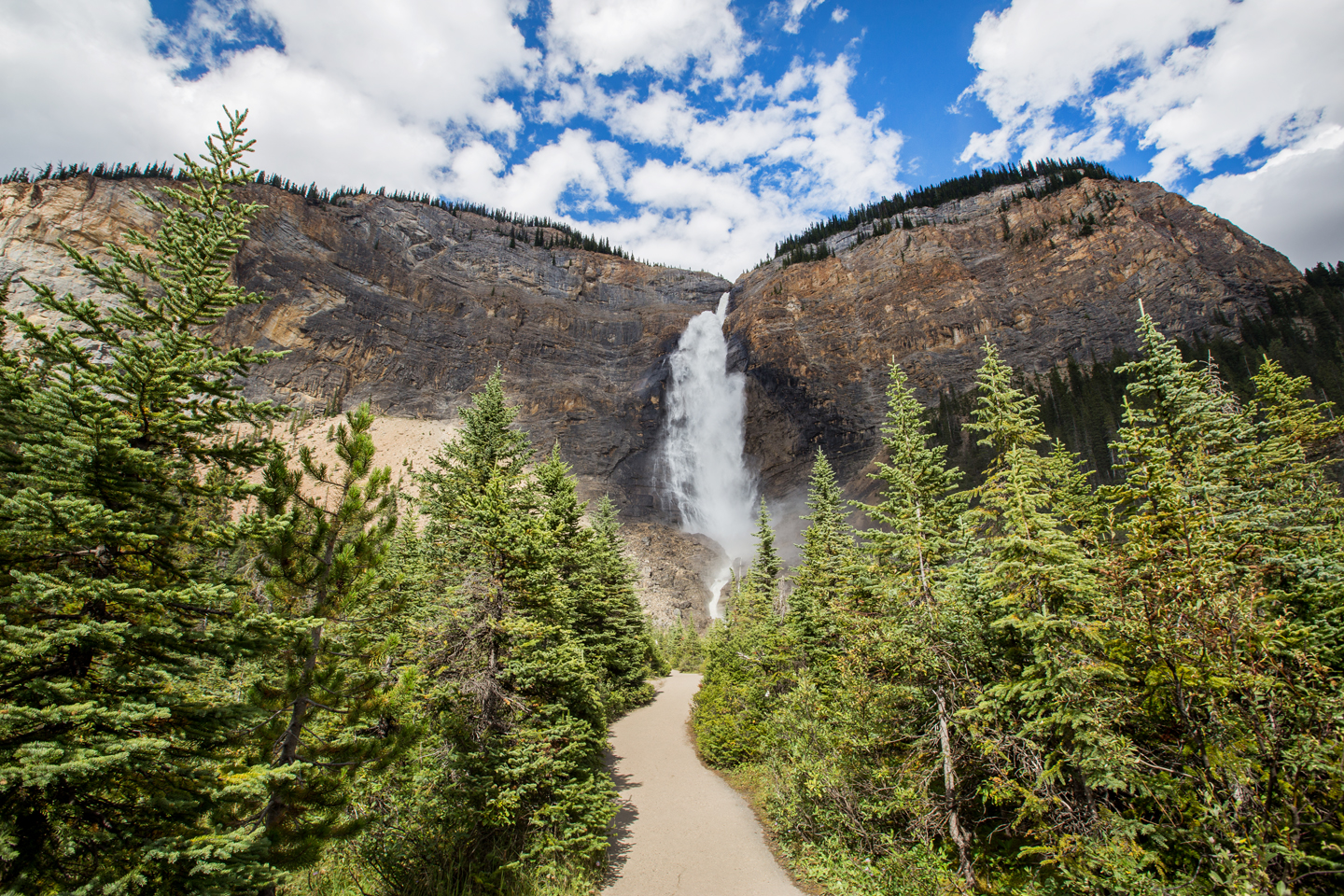 Walking along the path, you can hear the roar of the falls in the distance. Takakkaw means “It is Magnificent” in Cree (one of the first nations based in Canada), and we agree. The falls themselves stand in at 254 meters (roughly 830 feet) and their power is impressive. Daly Glacier, which sits just above the falls, feeds their flow as the ice melts. What’s especially fantastic about the falls, is how close you are able to get to them. A paved path leads right up to the base, where the air is filled with a swirling, cold mist. After a long day in the sun, felt amazing! It was easy to feel as though we had stepped into another climate zone, as we, and others around us, quickly became cold. However, the cold was well worthwhile and the falls treated us to a special treat, as a rainbow formed. 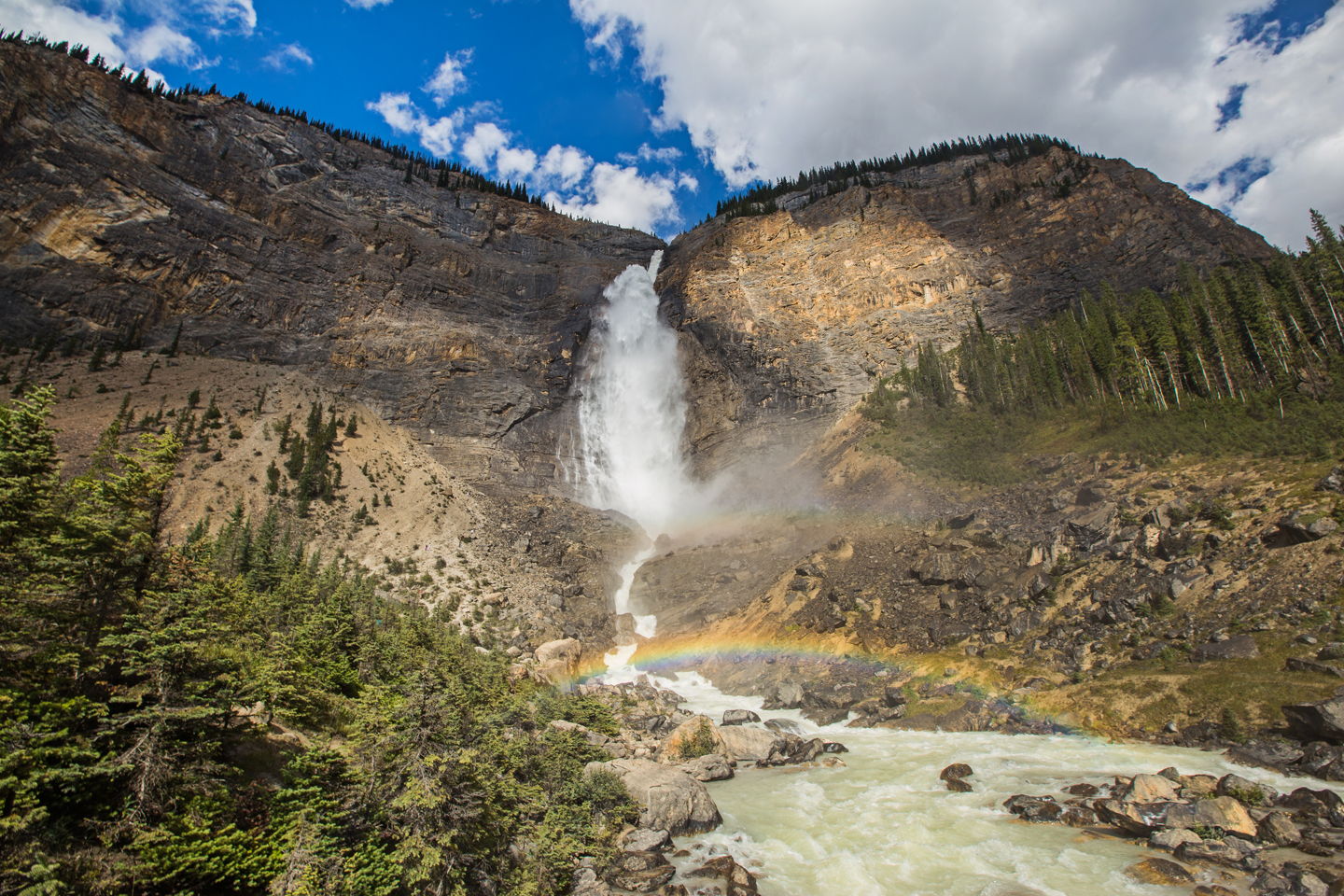 Taking nothing away from visiting the impressive glaciers earlier in the day, Julie and I both agreed that this was our favorite part of the day. Having had our fill of time at the falls, we made our way back to the car and hopped back on the road. As you leave the falls, there is another waterfall off to the right that can be seen coming down through the trees. 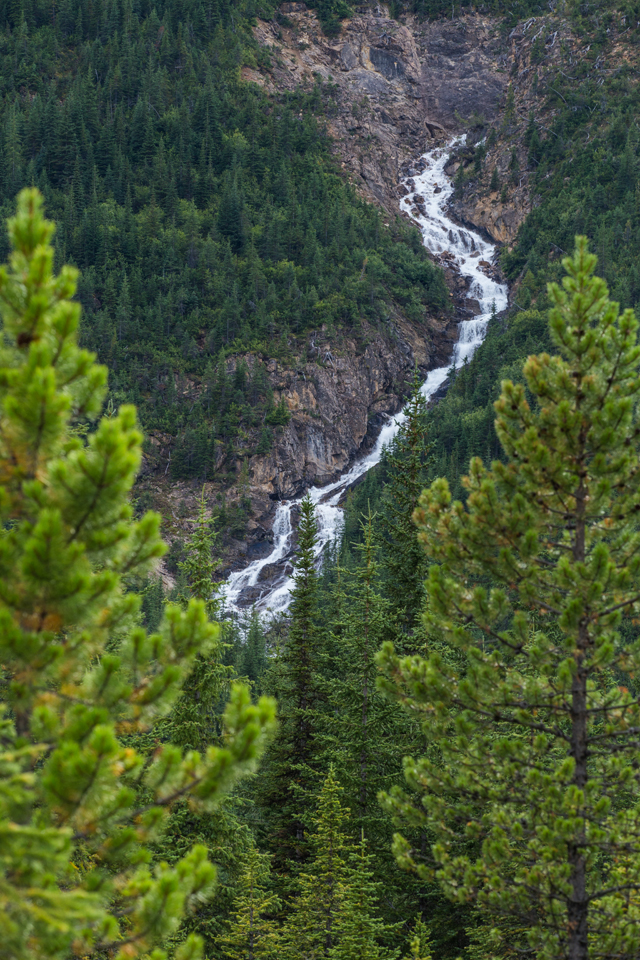 Further along the road, we pulled over at the Meeting of the Waters Confluent, where the Yoho and Kicking Horse rivers converge. The Yoho River gets its milky appearance from glacial silt produced by local glaciers, while the silt in the Kicking Horse River has settled in stream lakes which make its color clear. To get a closer view, we hiked down a short, rugged trail to the riverbank. 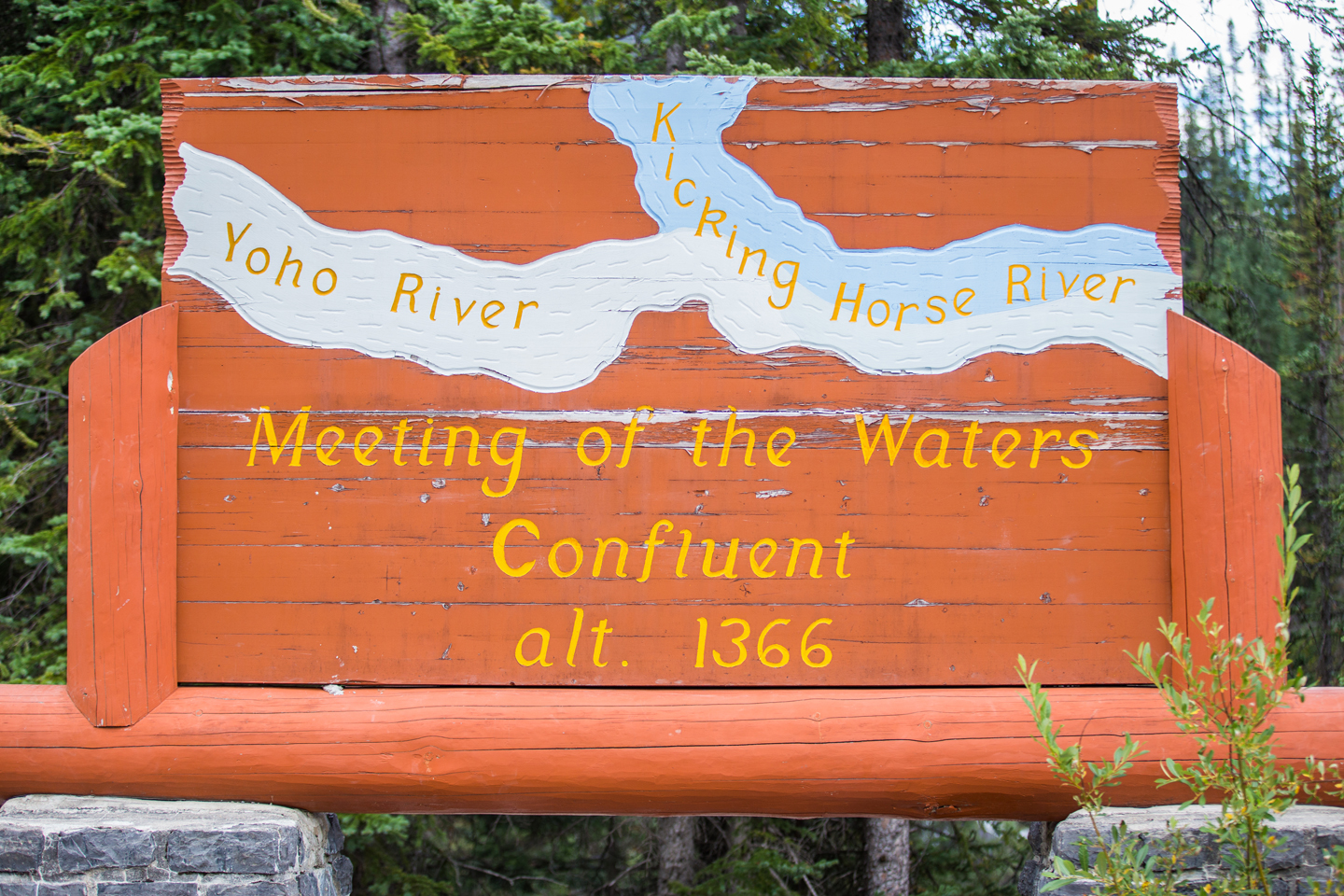 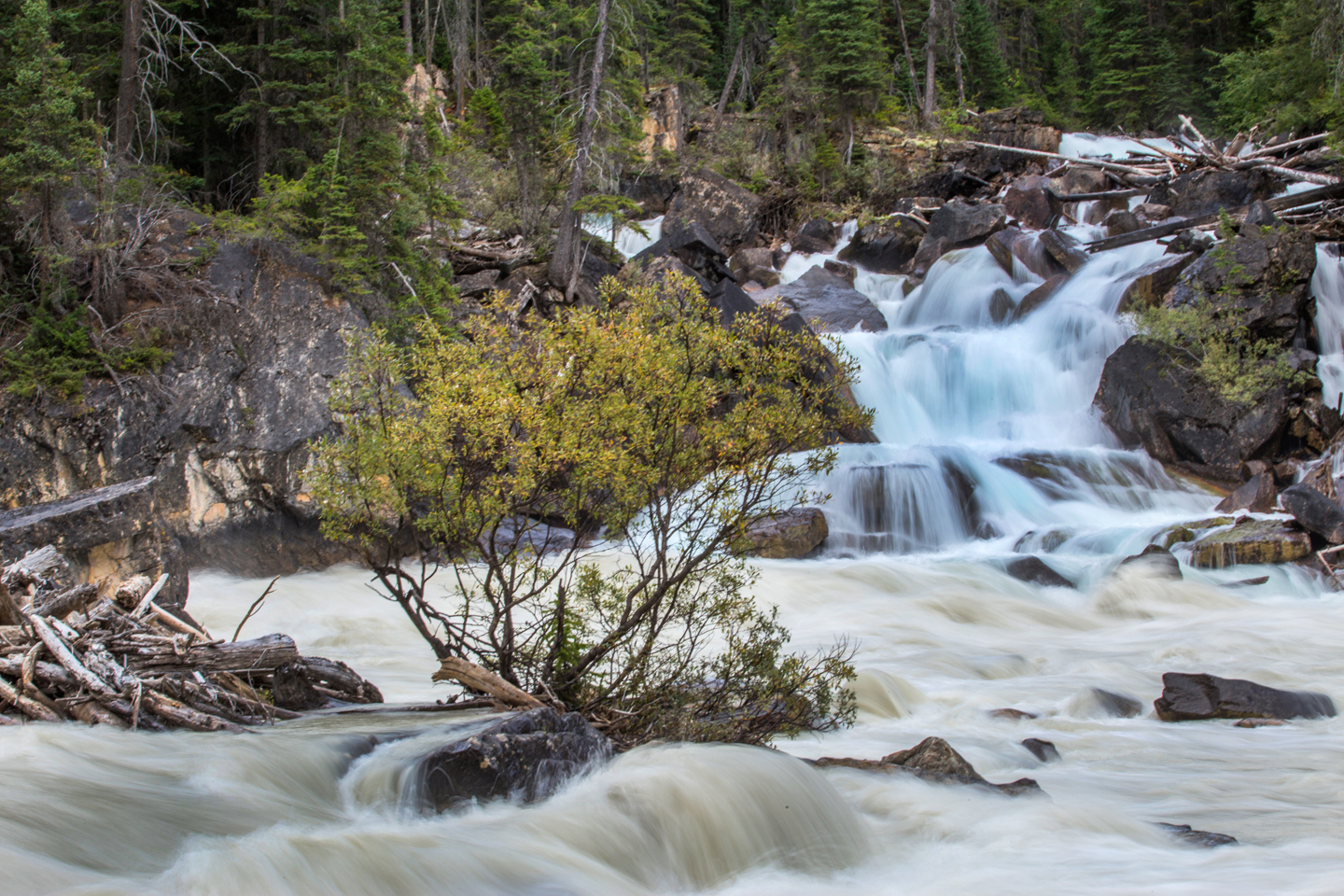 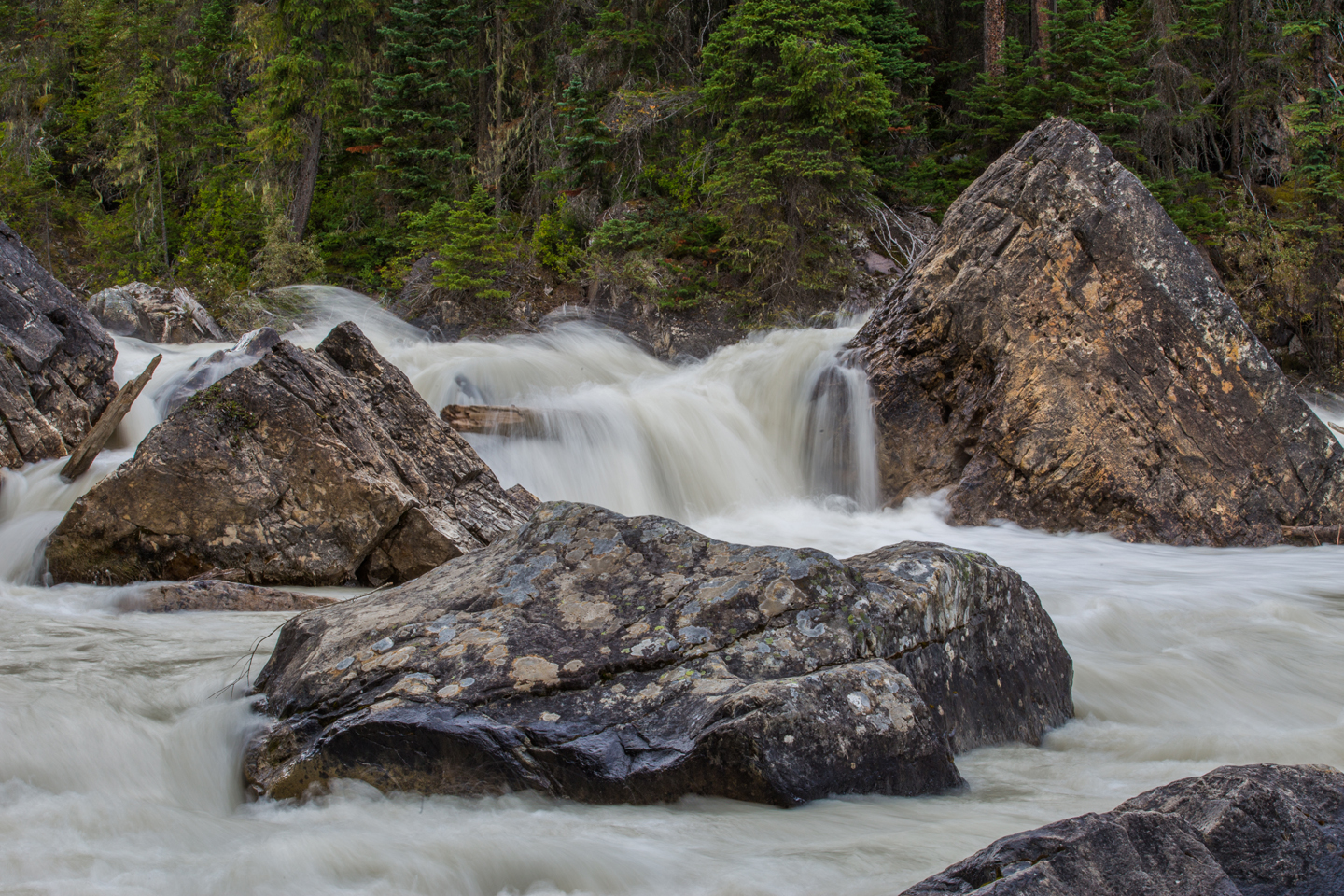 Our Yoho National Park adventure had come to an end, but it is definitely a place we can’t wait to return to and explore further! There are some fantastic hikes that begin near Takakkaw Falls and a gorgeous lake further into the national park. Until next time! 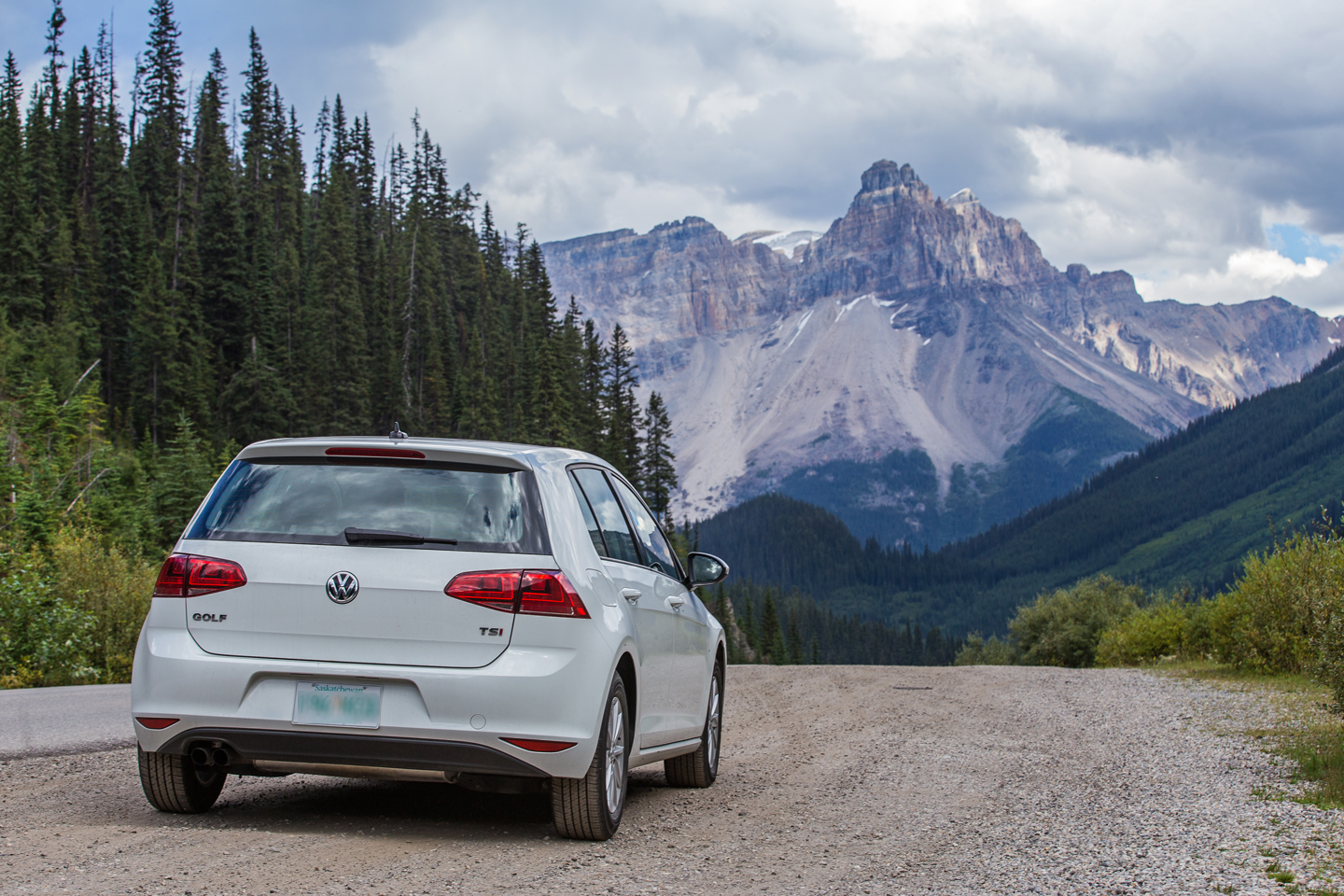 Seven Photos to inspire you to go to Jasper National Park

An Afternoon in Yoho National Park

Driving the Icefields Parkway: Part I

Lake Louise and Hiking the Plain of Six Glaciers

An Afternoon in Kananaskis

SAVE THIS PIN FOR LATER! 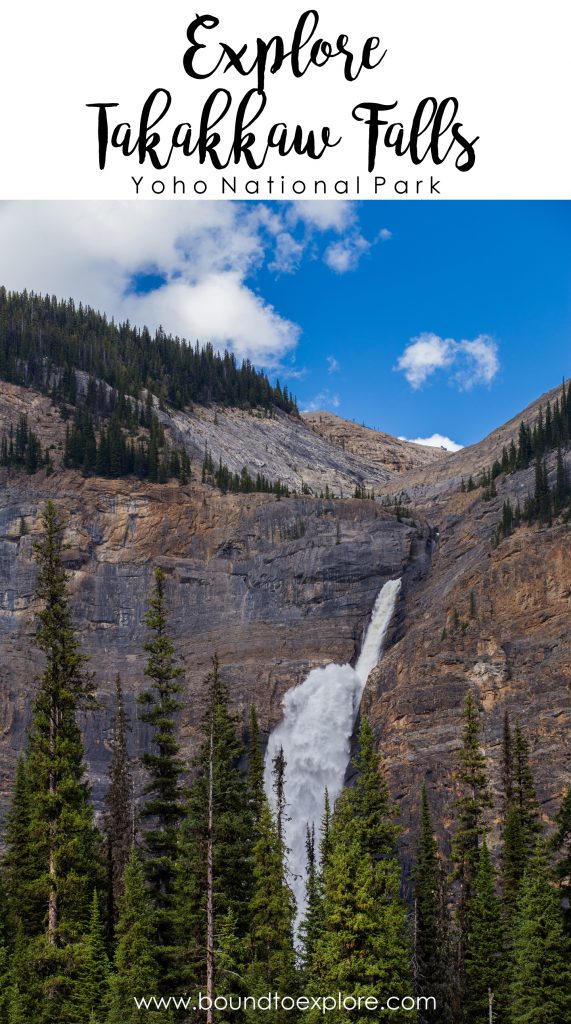