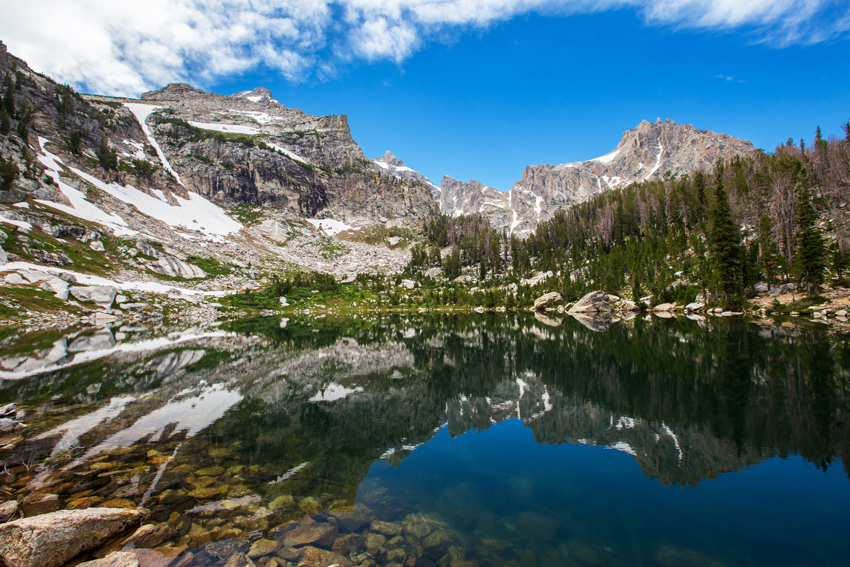 It’s Friday night, and our group is sitting in the living room of the Bentwood Inn, discussing the upcoming events of the weekend. Julie and I are getting married Saturday afternoon in Grand Teton National Park, but that plan is already in place, so the seven of us are working to decide what hike we will be doing on Sunday. While it might seem a bit ambitious to get married one day and then subsequently get up the next and hit the trail, we couldn’t think of a better way to celebrate the big day. In a destination with so many choices for hikes, there were many differing opinions. After much deliberation, we decided on a tough alpine hike with epic views along the way: Amphitheater Lake. 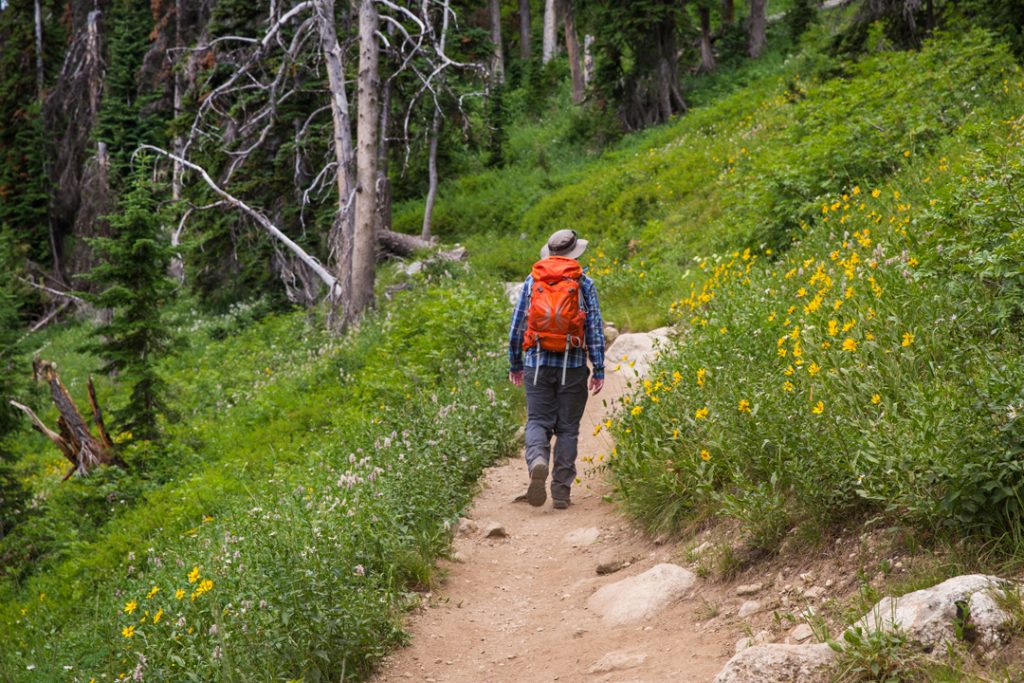 We started Sunday morning off right with breakfast at the inn before piling in to two cars and making our way into the park. The drive from the Jackson area is about thirty minutes to the Lupine Meadows Trailhead. Leaving a bit later in the morning meant parking at the trailhead was already packed with other cars when we arrived. As I pulled in and searched for a parking spot, I noticed a car that was parked crooked with the driver sorting through her things before leaving on a hike. I asked if she would be willing to straighten up so I could also park there, and she kindly obliged. With our gear unloaded from the car, the seven of us hit the trail and began our trek up. 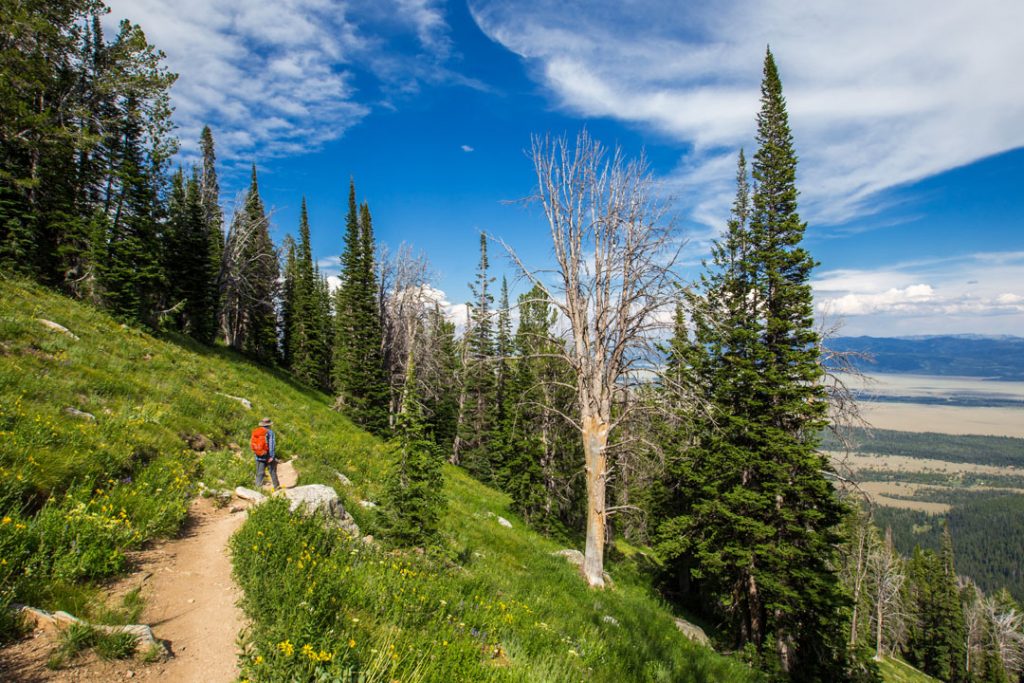 Depending on your sources, the trail to Amphitheater Lake is about 9.5 miles and begins at an elevation of 6,732 feet. It gradually begins to make its way through a pine forest, and you’ll catch some pretty stellar views along the way. Our group of seven consisted of three different sub groups. The mountain goats who led the charge and reached the top first, which included Julie’s sister, Rachelle, my brother, Jeff, and our photographer who is also Julie’s friend, Matt. Julie and I made up the middle of the pack, pacing ourselves and allowing time for Julie to take photos along the way. Julie’s parents, Larry and Randie, made the steady climb also, stopping periodically for photos, particularly of a mother and baby deer that crossed our paths. 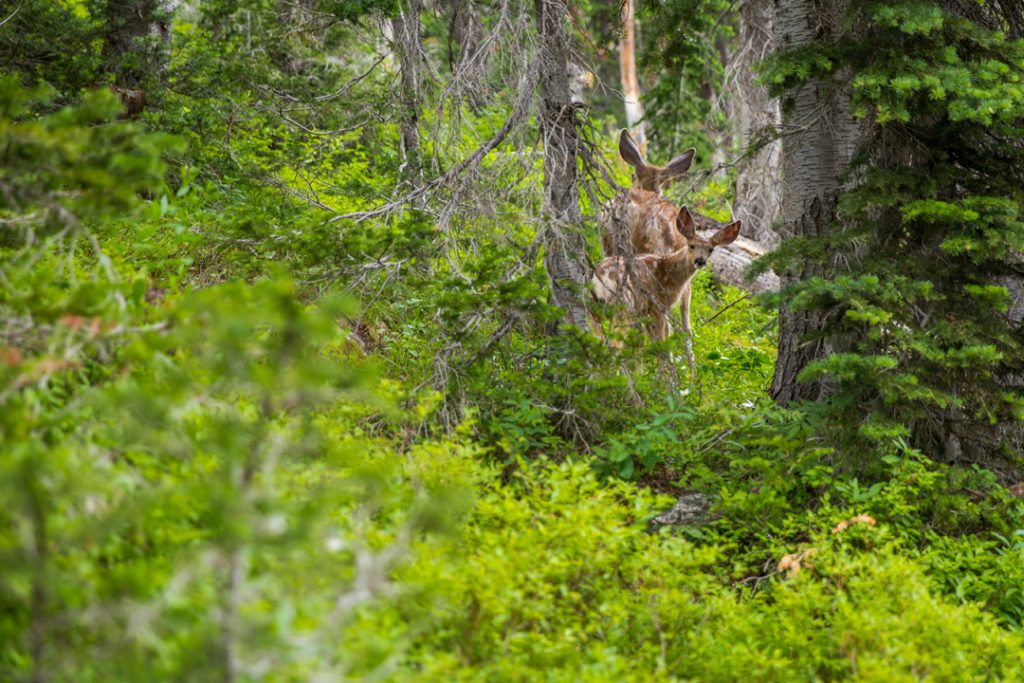 I can’t stress enough how awesome the views on this hike are! As we continued to swtichback our way along the trail, we made a point to stop and take in the sight of the two lakes we had hiked to earlier in the week, Bradley and Taggart Lakes. If you’re feeling rather adventurous, and fancy an even longer day, you can add them on to your itinerary as well. Another hike that can be accessed from the Lupine Meadows Trailhead, and one we contemplated briefly as well, is Delta Lake. We ran into some hikers coming back from the Delta Lake junction and they looked a bit tired, but said the lake was pretty. 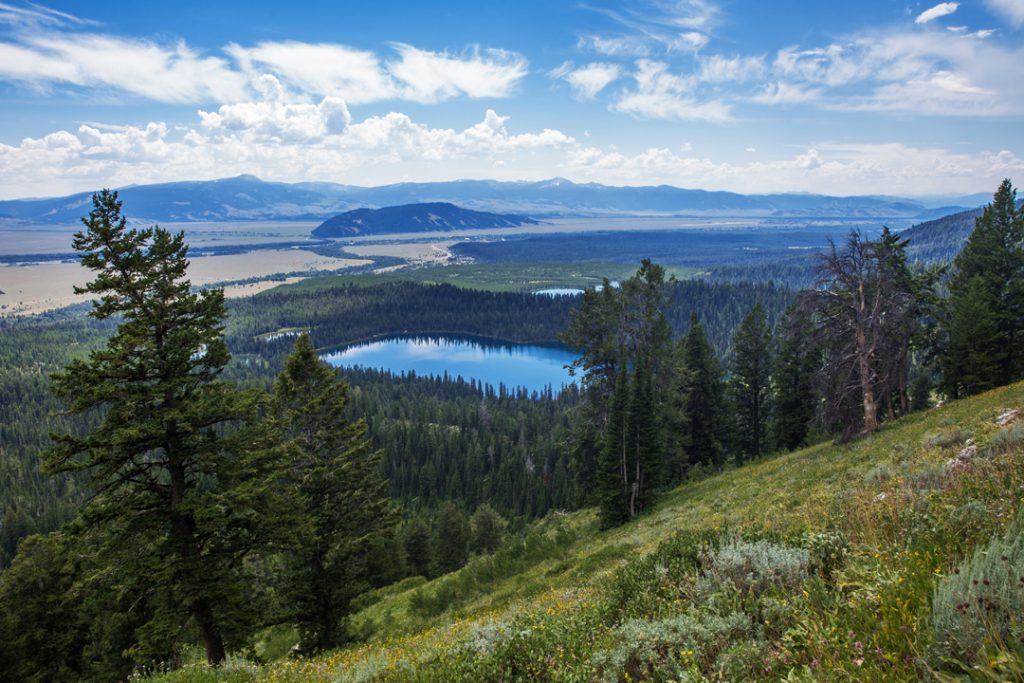 As we continued on, the clouds moved around us and became dark in spots. It’s always important to remember how quickly the weather can change on the mountains, as we found on our hike to Bradley and Taggart Lake, and the downpour we were caught in on our failed attempt to hike to Mount Whitney. Since the latter hike, we always make sure to pack rain jackets and an inexpensive poncho as a secondary backup. Julie and I both bought Osprey packs a short time ago, which we love, particularly because they include a rain cover to protect the pack. Getting close to the top, and with the rain starting to fall, and thunder rumbling in the distance, we decided to throw our jackets and pack covers on just to be safe. Fortunately, the storm did not last long, and within a few minutes moved past us completely. 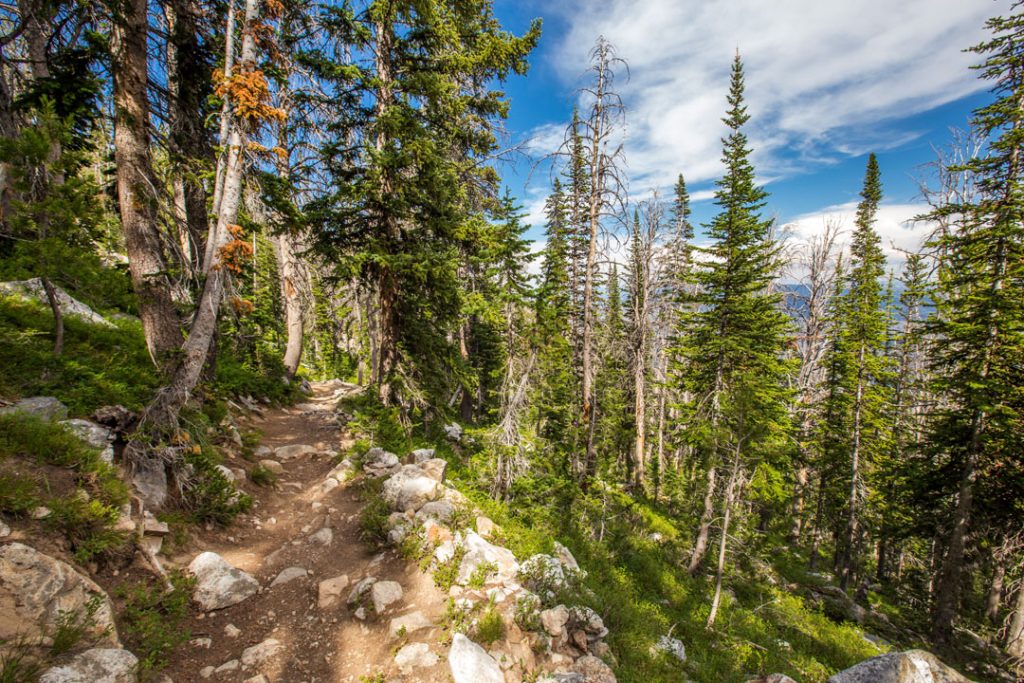 The last section of switchbacks is a bit of a challenge as we reached 9,000 feet. When the trail finally leveled out, we knew we could breathe a sigh of relief. We stopped for a moment at neighboring Surprise Lake, the fifth lake in the area, before continuing on to Amphitheater Lake for a much needed rest and lunch. After the long climb up, it was safe to say it was well worth all the effort as Amphitheater Lake is gorgeous! I found a rock to sit on and devoured my trail sandwich, while Julie enjoyed putting her feet in the cold alpine water. The only thing that would have made the lake even more idyllic would be a lack of mosquitoes, which unfortunately as was the theme of our trip, was not the case. 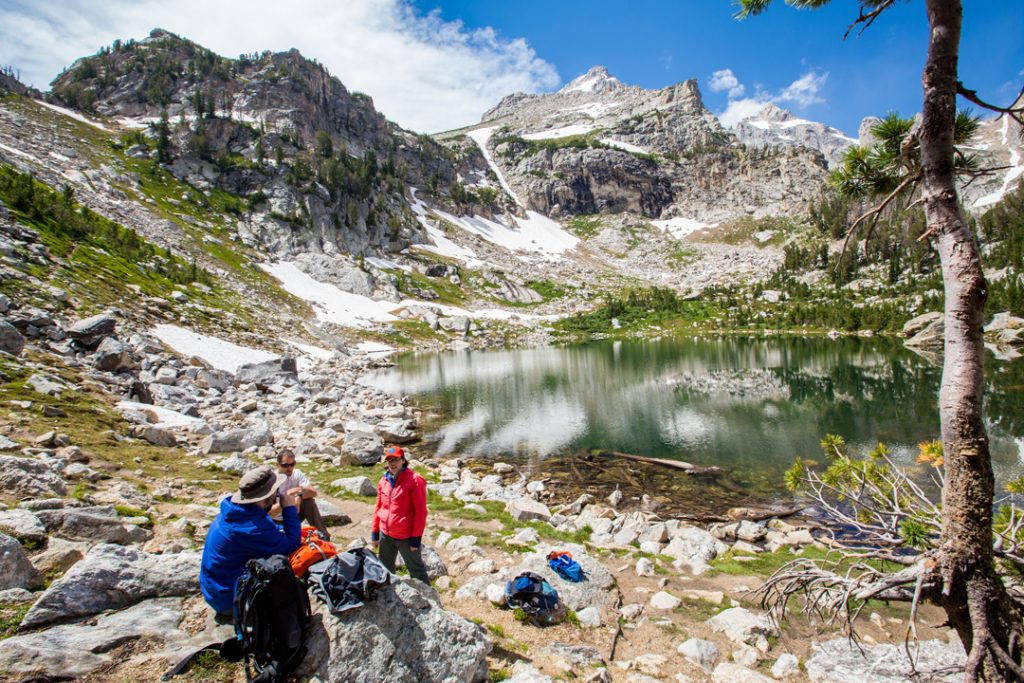 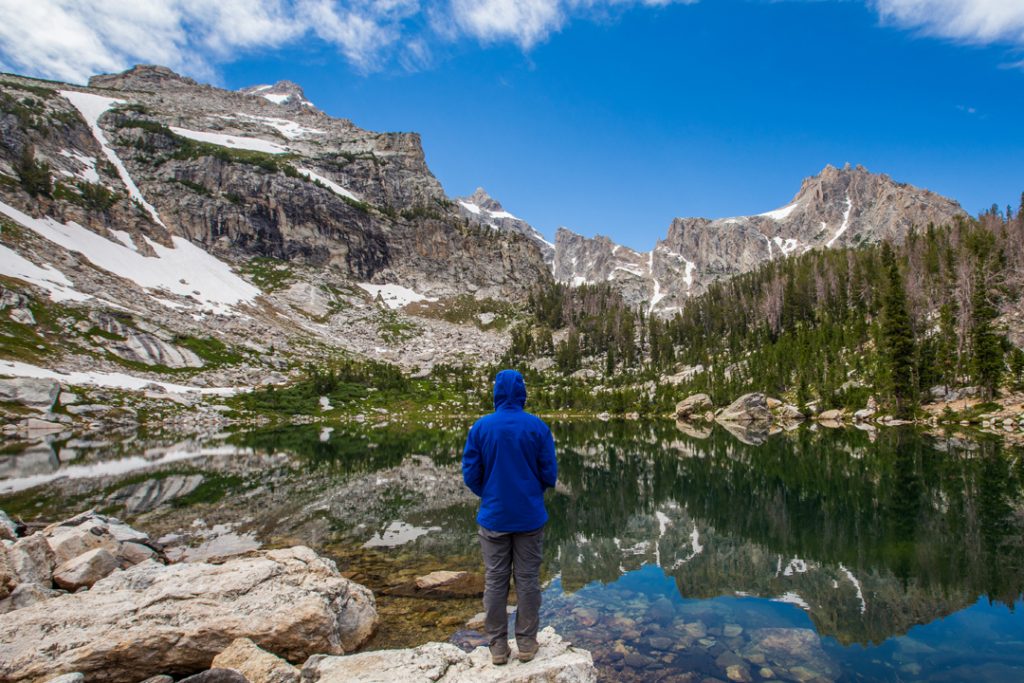 Once we had our fill of Amphitheater Lake, we walked the short distance back to Surprise Lake (As in, Surprise! More mosquitoes!) for some photos before starting our descent. For as much as we love to get to the top of a mountain or lake, the desire to get back down to the car is often equally high, and this was certainly the case on this trip. A welcome sight when we returned to the parking lot, our group congratulated each other on a great day of hiking and headed to The Snake River Brewing Company for some much needed burgers and beers. 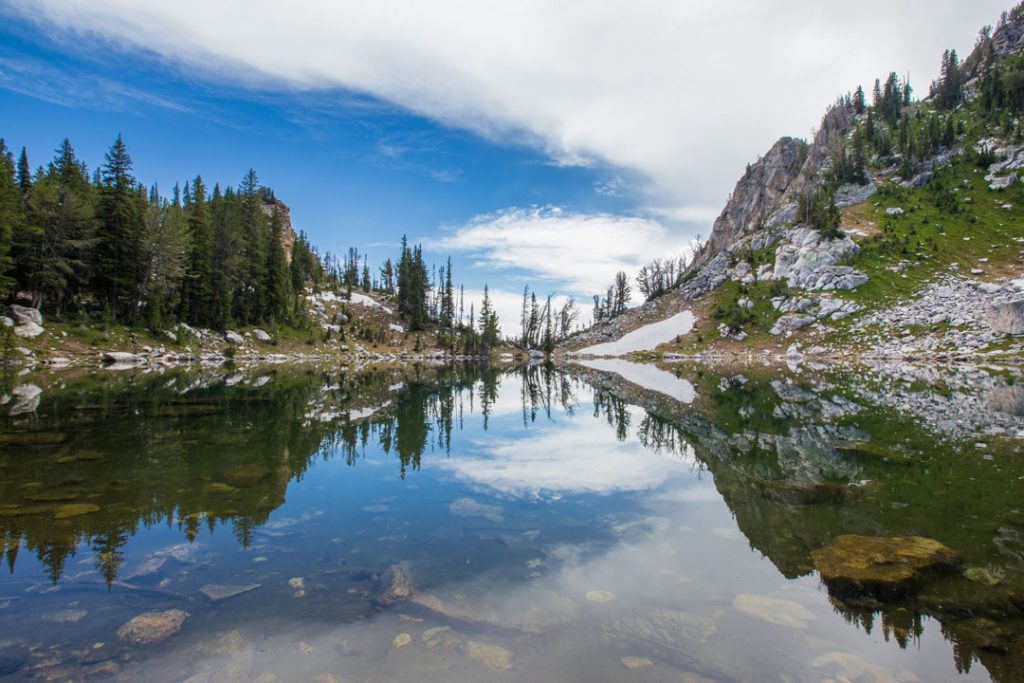 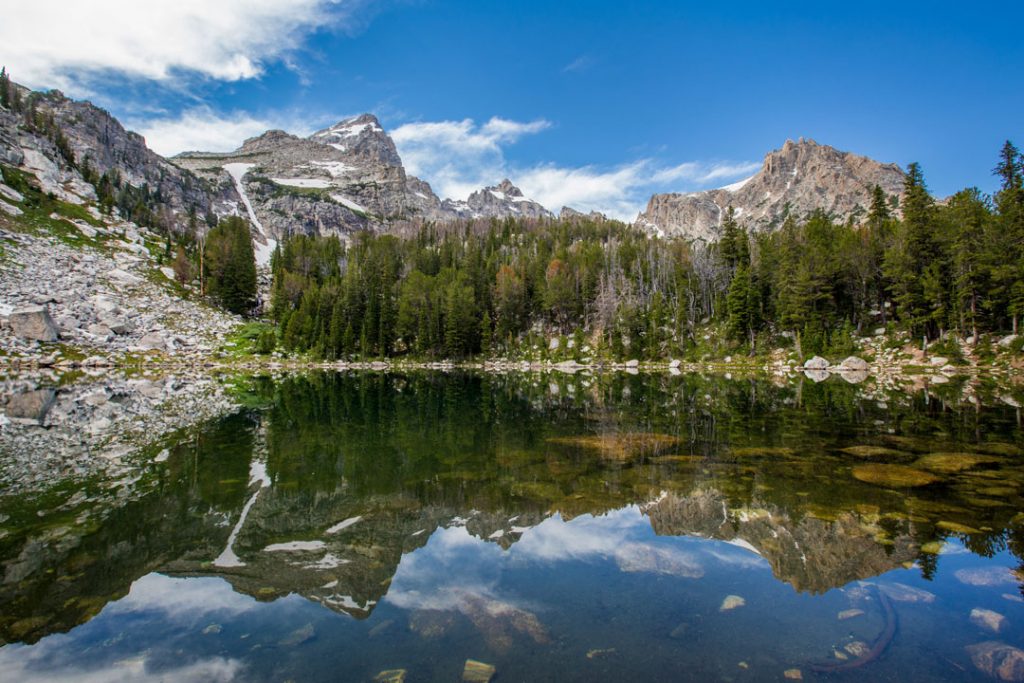 Have you ever been to Amphitheater Lake? Let us know in the comments!

Hiking to Bradley and Taggart Lakes