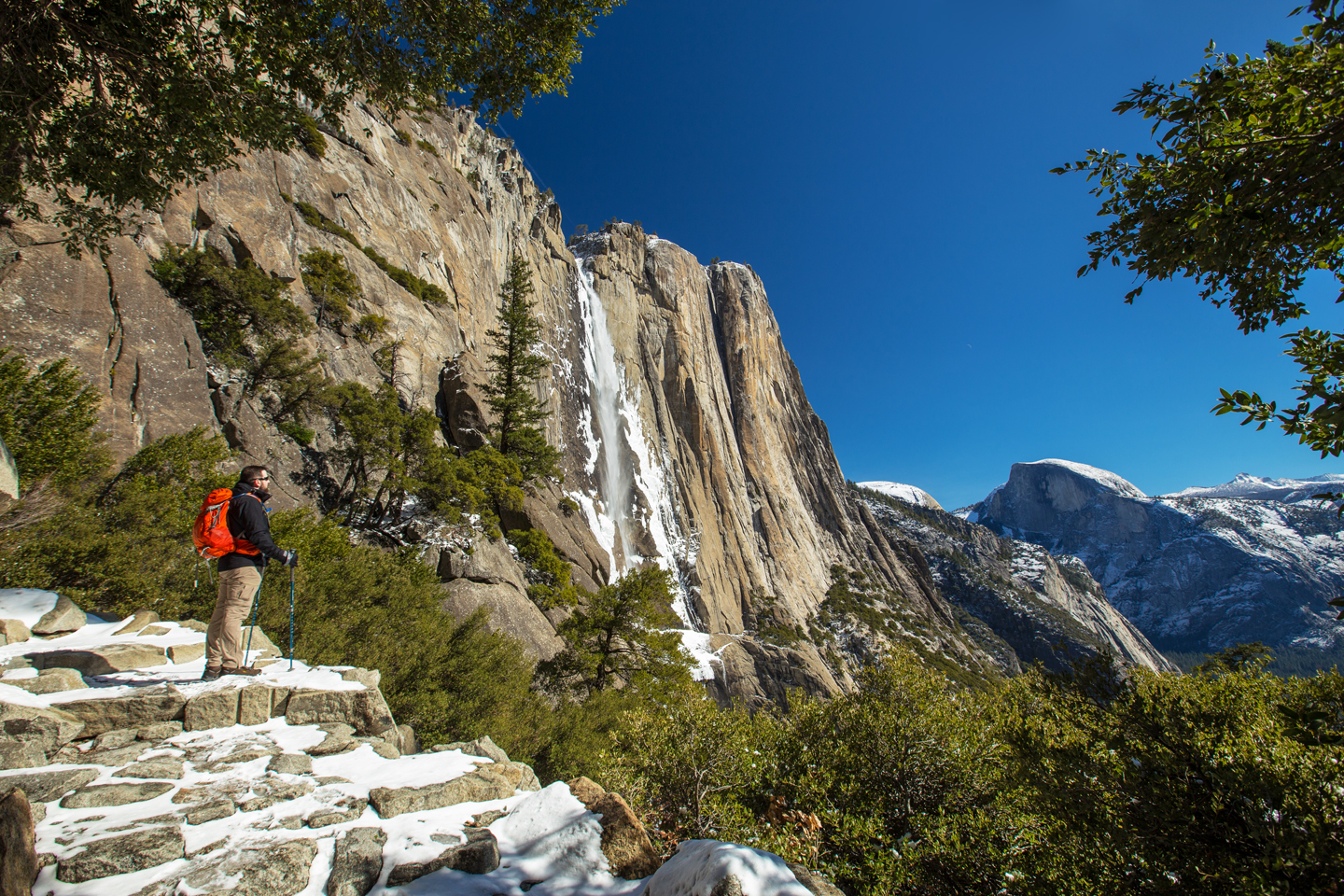 Yosemite is a magical place to visit anytime of year, but there’s something extra special about seeing the famous granite covered in a fresh layer of snow.

Perhaps that lends some explanation to the fact that three of our four visits there have been in winter. It’s also a good opportunity to avoid the summer crowds that overflow throughout the valley during the park’s peak season.

For our last winter trip to Yosemite in 2016, we snowshoed to Dewey Point and got engaged at Swinging Bridge. Easily one of the most memorable experiences of our lives, Yosemite continues to hold a special place in our hearts and beckons us to return.

Two years later, we were excited to be headed back to Yosemite as newlyweds and in search of our next adventure, hiking Upper Yosemite Falls.

The trail to the top of the falls is not always open in winter, so it is important to check with park rangers at the visitor’s center for up-to-date conditions before heading out on your hike. However, even during heavy snow seasons you can usually hike to lower Yosemite Falls and Columbia Rock, which is along the trail to Upper Yosemite Falls. 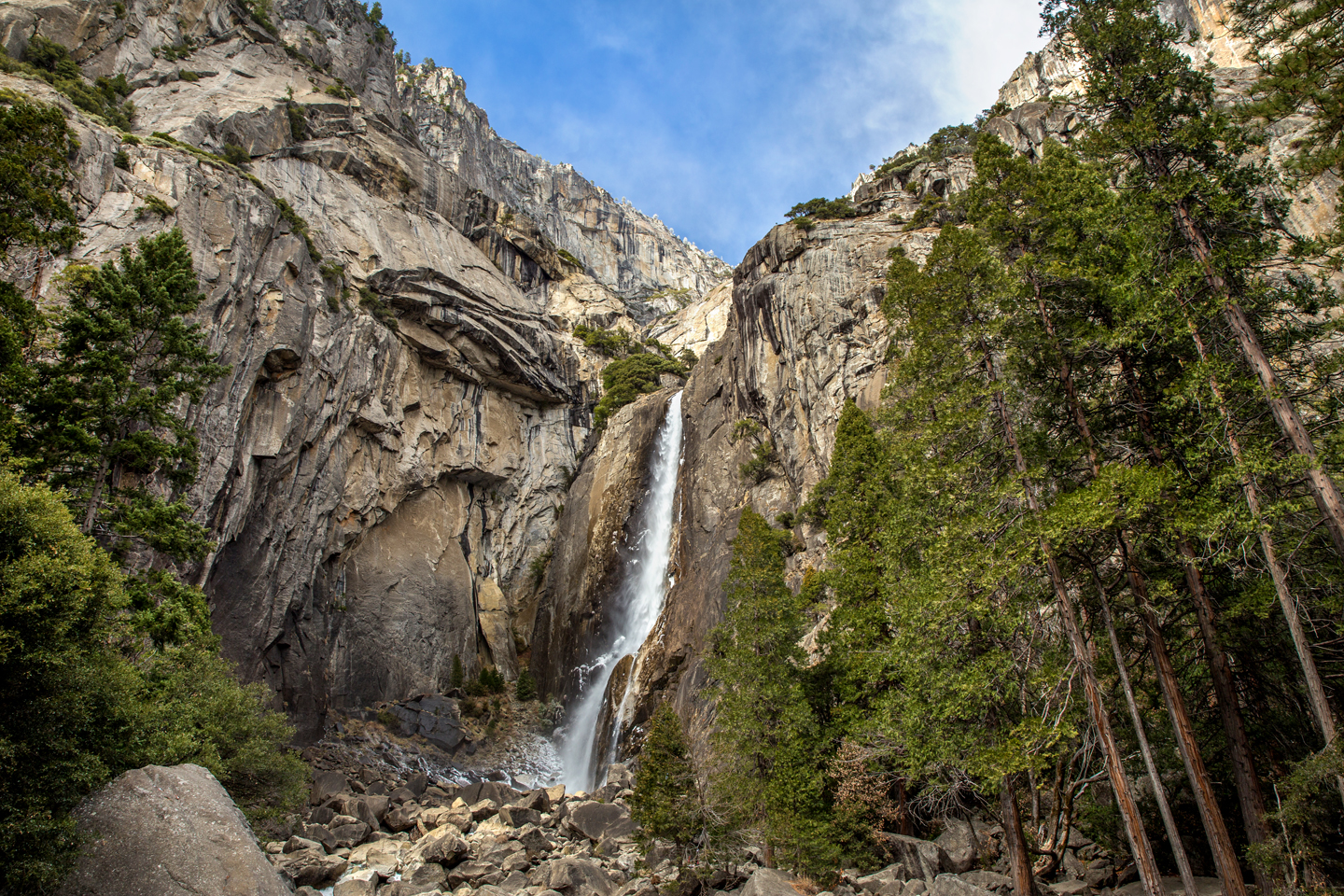 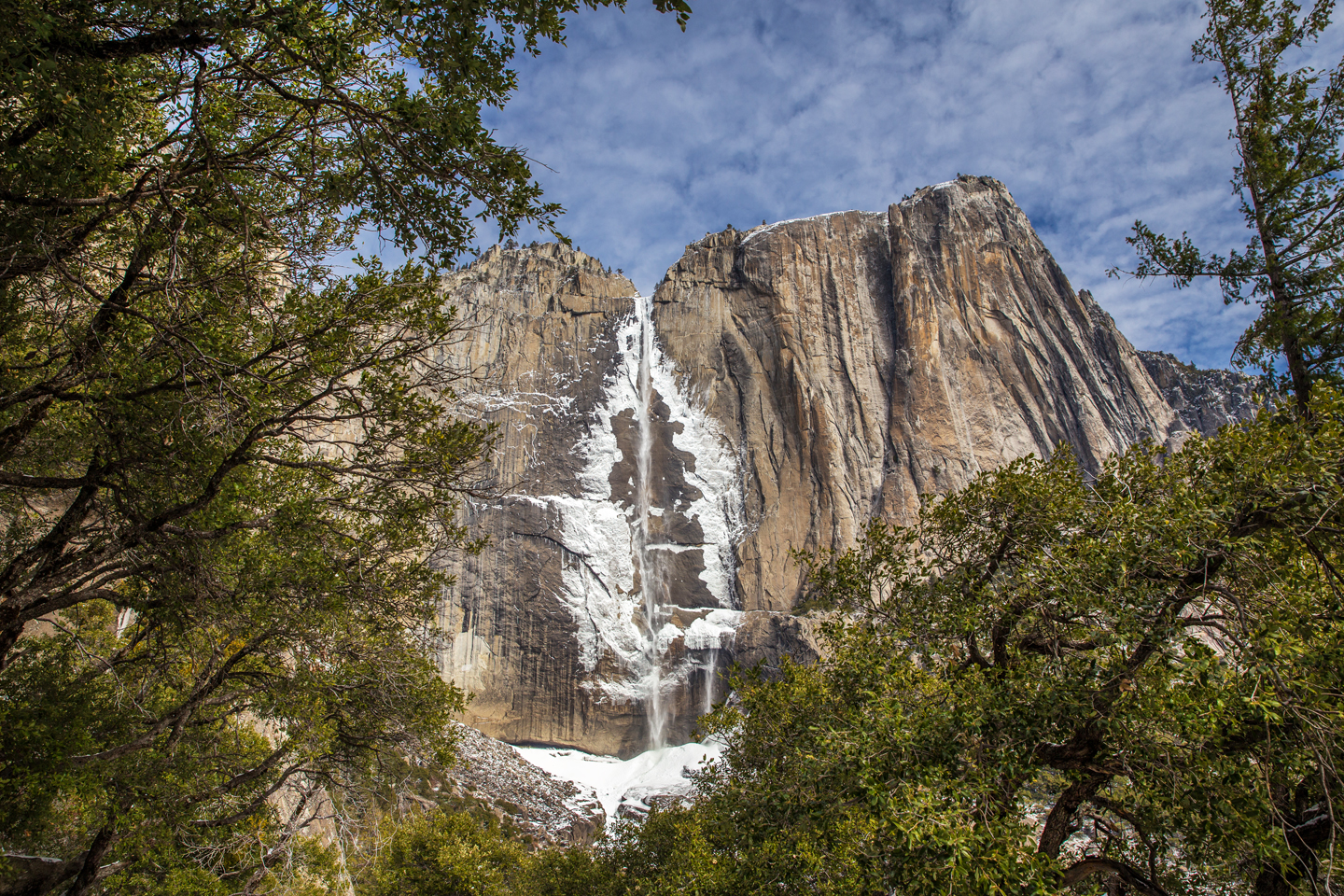 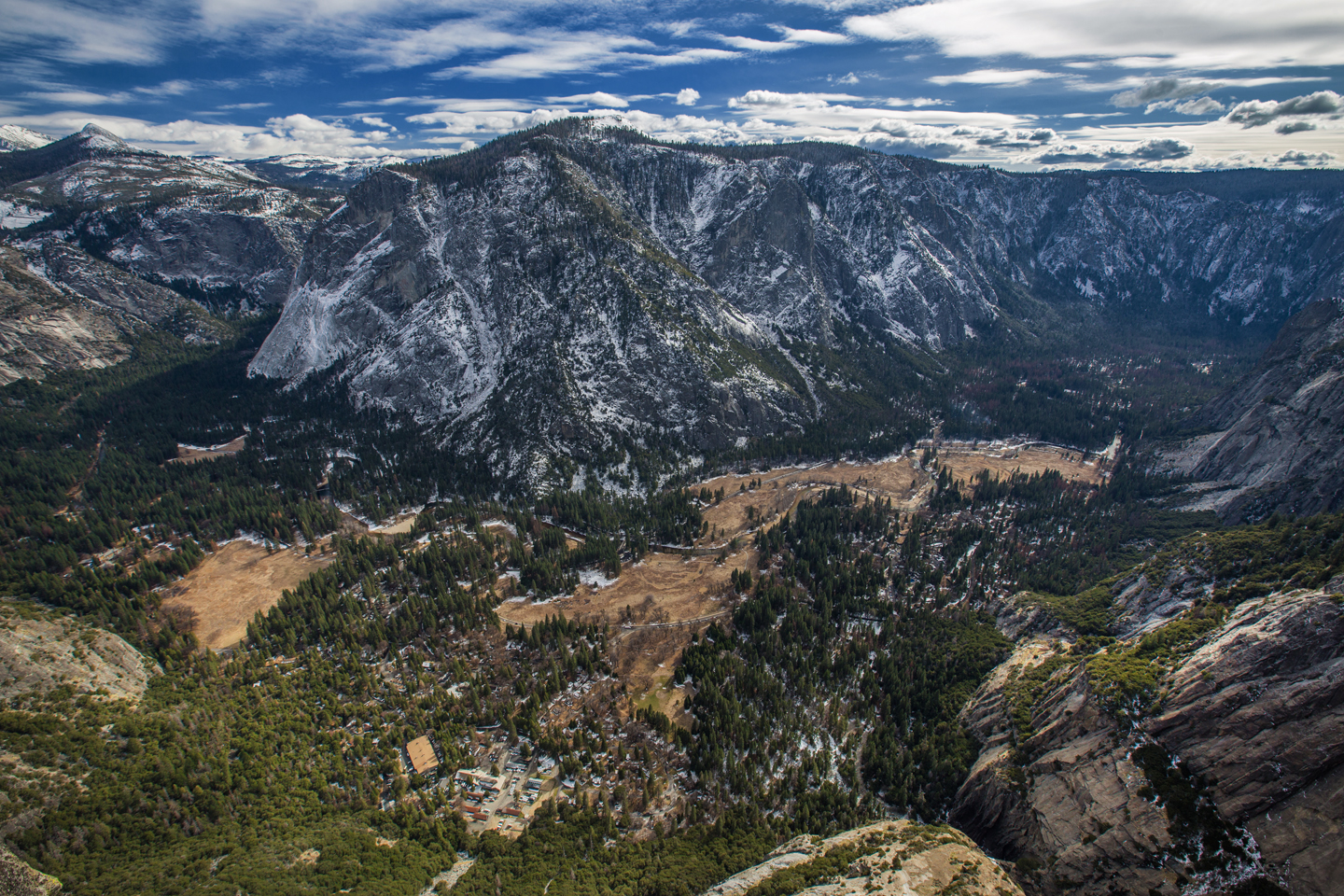 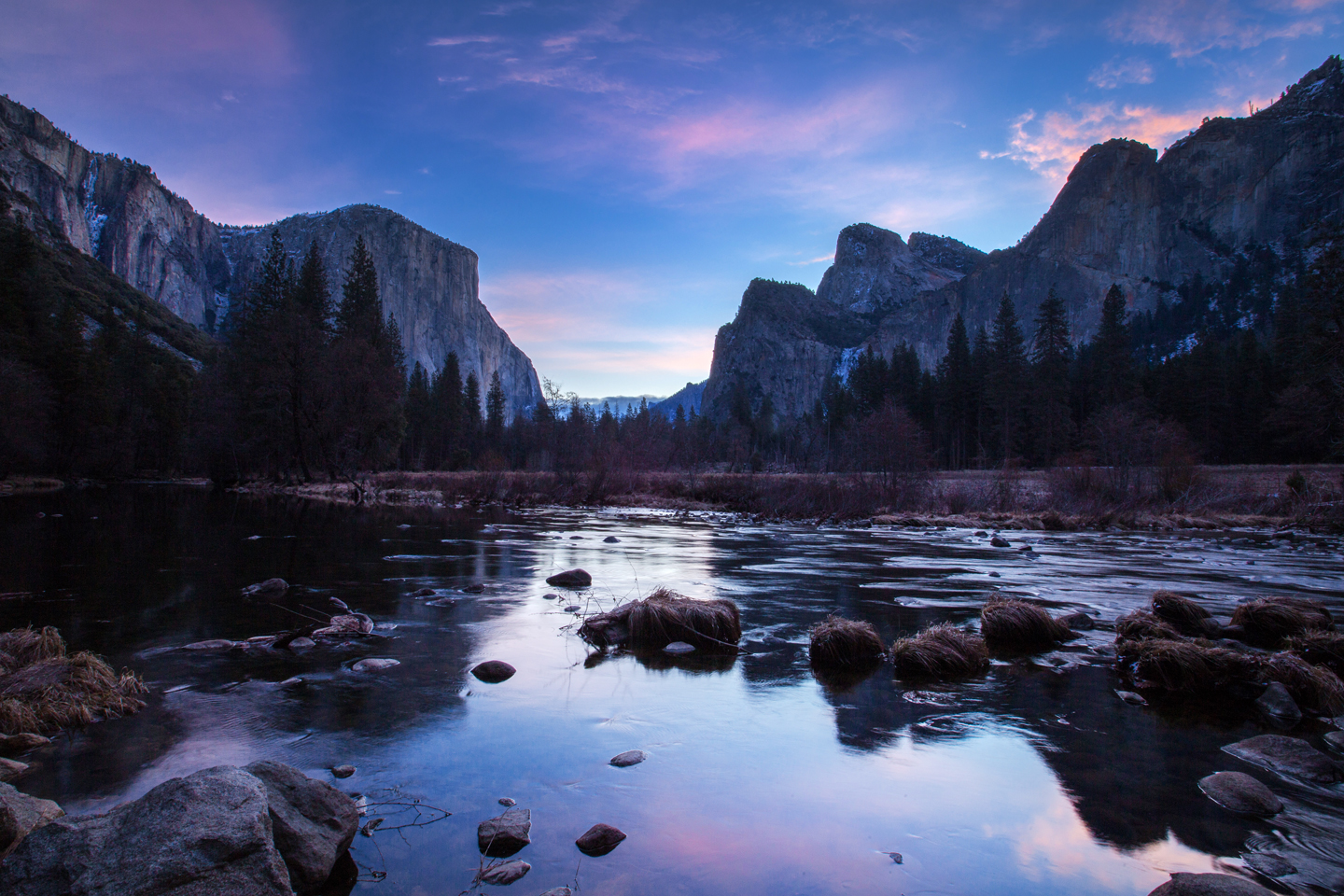 Near the end of 2017, Julie booked us two nights at the Yosemite Valley Lodge, for President’s Day Week. The hotel has been our mainstay on each of our prior winter trips with its central location. Because the high country and many of the roads are closed for the season, setting up a base in the valley is ideal. With our reservation made, we knew we could fill in our activities, depending on how the weather shaped up. 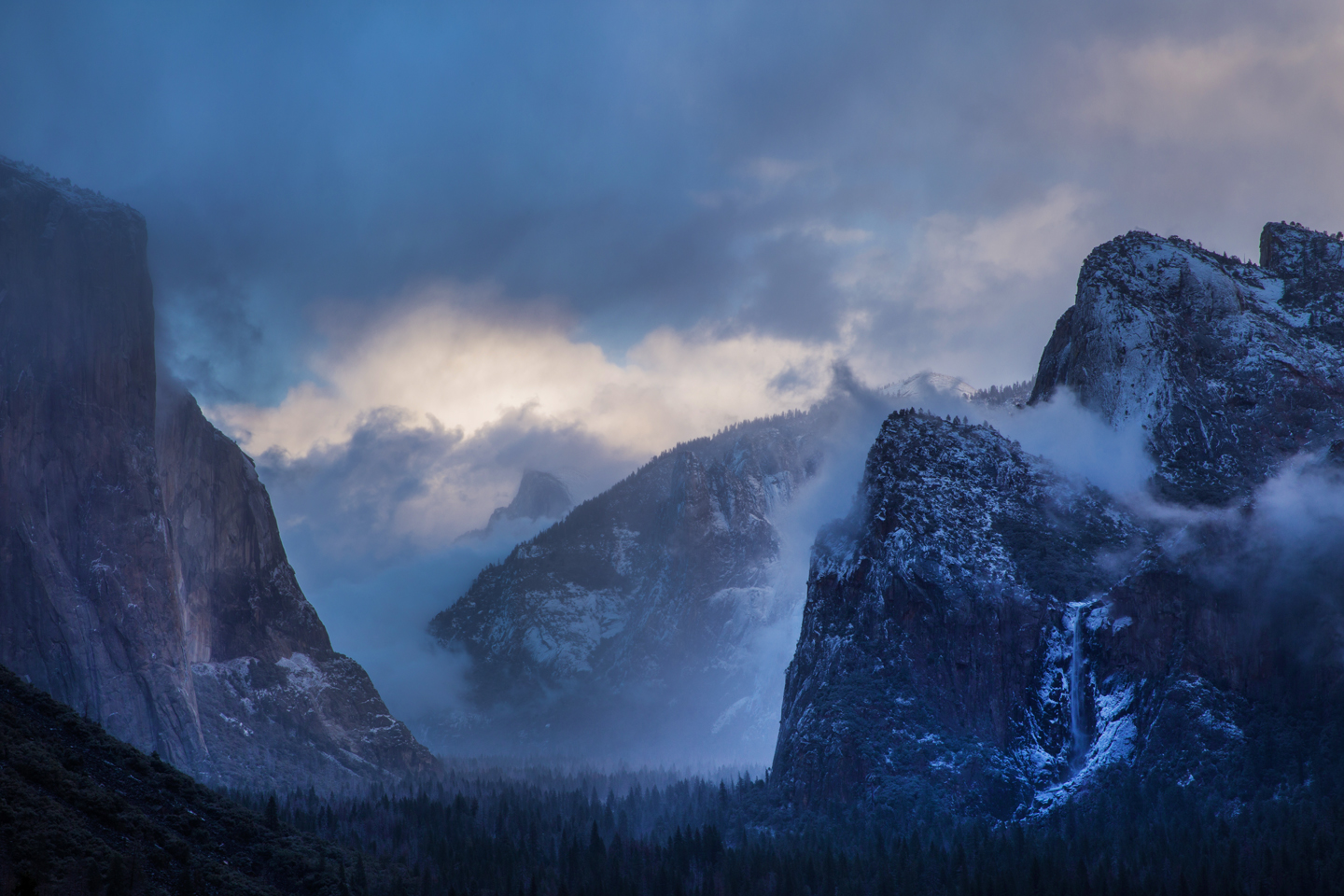 As December and January passed by, Yosemite had received little to no snow in the valley. We eagerly  monitored the park’s webcams online, and photos on social media as the days lead up to our trip. A week out, we got word that a storm would be hitting the park over at least one or more of our days. Now that snow was in the forecast, we were excited plan our hike. Having hiked the Panorama Trail to Glacier Point on our first Yosemite trip, we decided on hiking Upper Yosemite Falls this time around.

Snow had fallen the day we arrived and continued into the night, so we expected to find similar conditions on the trail. The Upper Yosemite Falls Trail starts just across from the Yosemite Valley Lodge, so we had a short walk to the trail-head from our room.

Since the Upper Yosemite Falls hike is 7.2 miles round-trip, with 2,700 feet of elevation gain, we knew we would be in for a long day and an early start would be crucial. Following a quick breakfast, Julie and I threw on our microspikes and set out for our adventure. 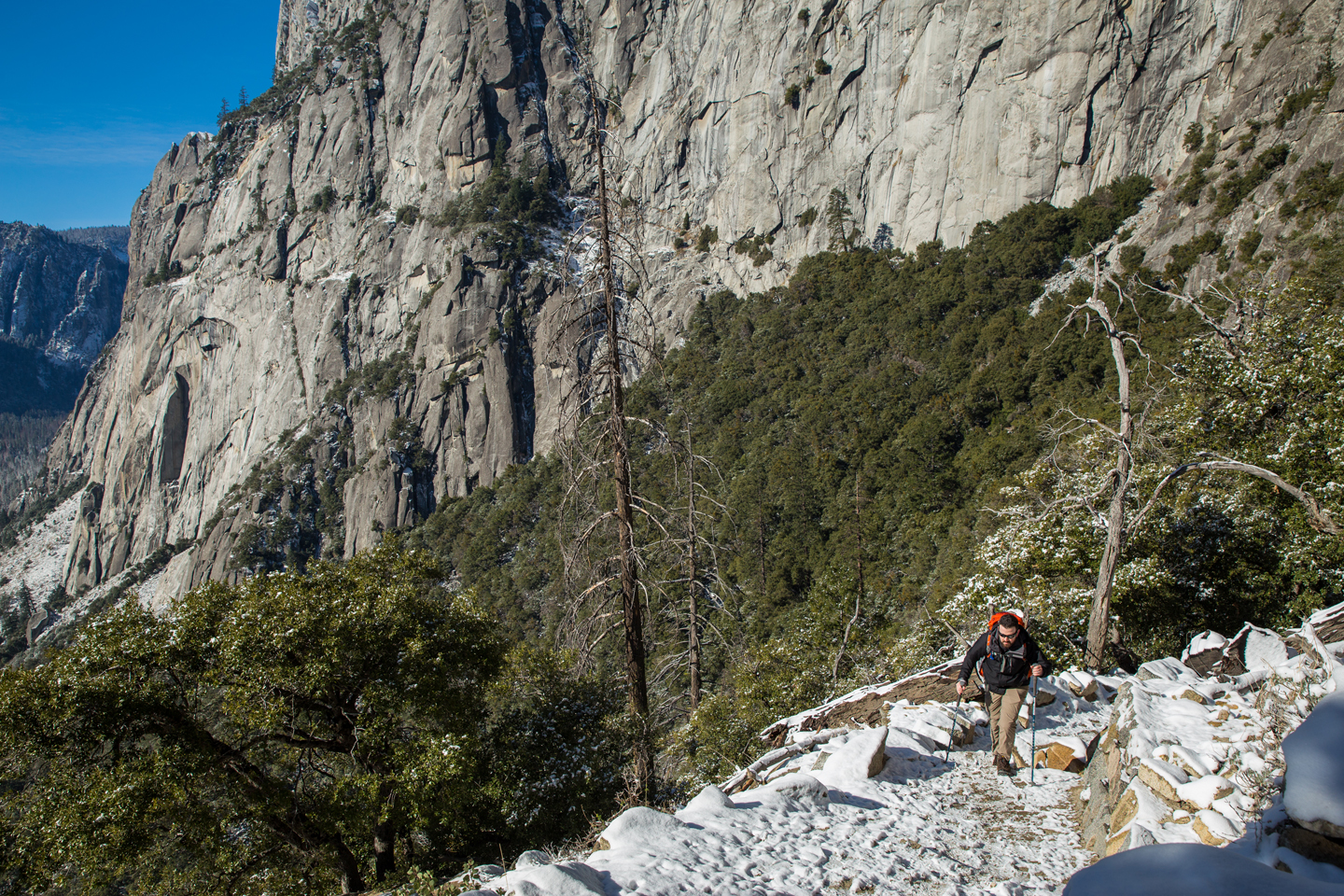 From the outset, the trail begins its gradual ascent, winding through the trees. Chunks of the path were covered in snow, so we were happy to have some traction, and we made mental notes of where we would expect a challenging return.

After a mile and 1,000 feet of gain, the first viewpoint of the falls comes at Columbia Rock. This is a popular turnaround spot for casual explorers who don’t intend to go all the way to the top of Yosemite Falls. It was also around this time that Julie and I realized that while there was some snow on the trail, it wasn’t enough to necessitate the spikes, so we stored them for later.

Now that we had gotten higher, we were treated to views of the Yosemite Valley, and Half Dome standing magnificently in the distance. We stopped regularly to enjoy our surroundings, while taking photos and listening to pieces of ice breaking off the falls. The trail straightens out for a bit, before picking back up with the switchbacks and a steady climb. 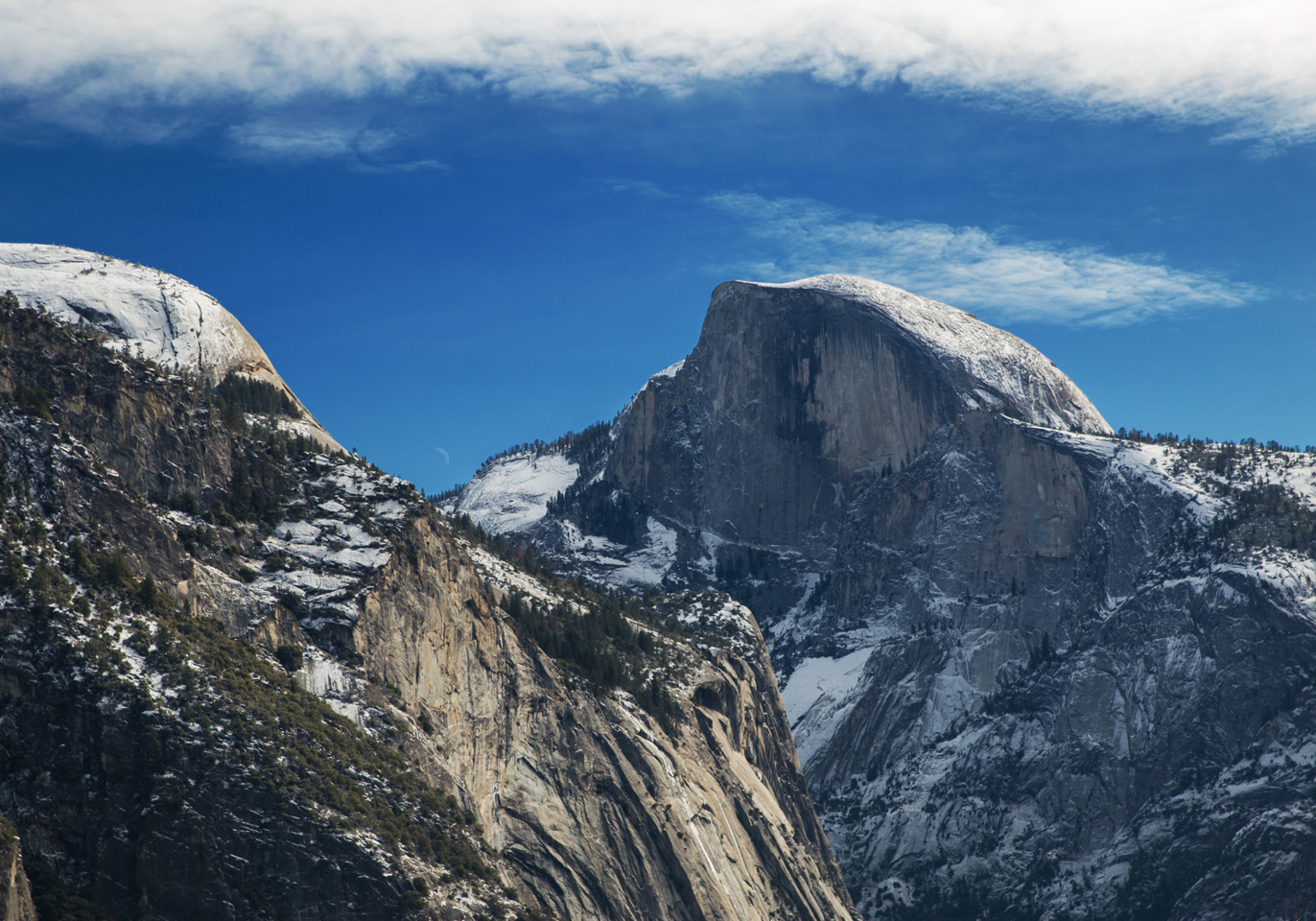 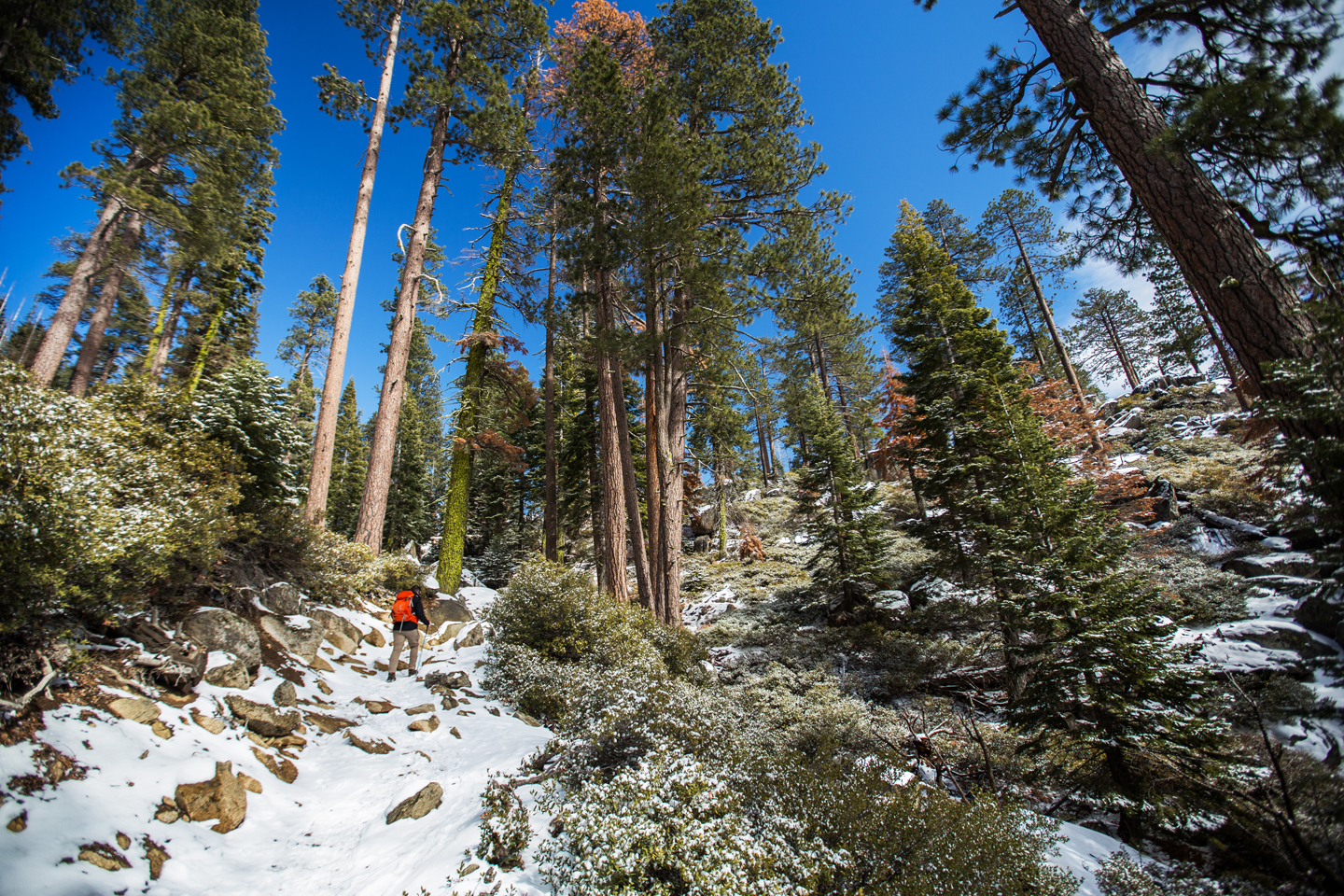 After a grueling push up the switchbacks, we reached a sign indicating we were just 0.2 miles from the falls. Unfortunately, the sign was littered with graffiti, as was the case with several of the other signs in the area. I have said it before but it bears repeating, no one wants to see your name on any signs, trees, rocks, or anything else. Nature and our National Parks are precious, and we must do our part to preserve them for future generations to enjoy. Leave the parks better than you find them.

The Top of Yosemite Falls 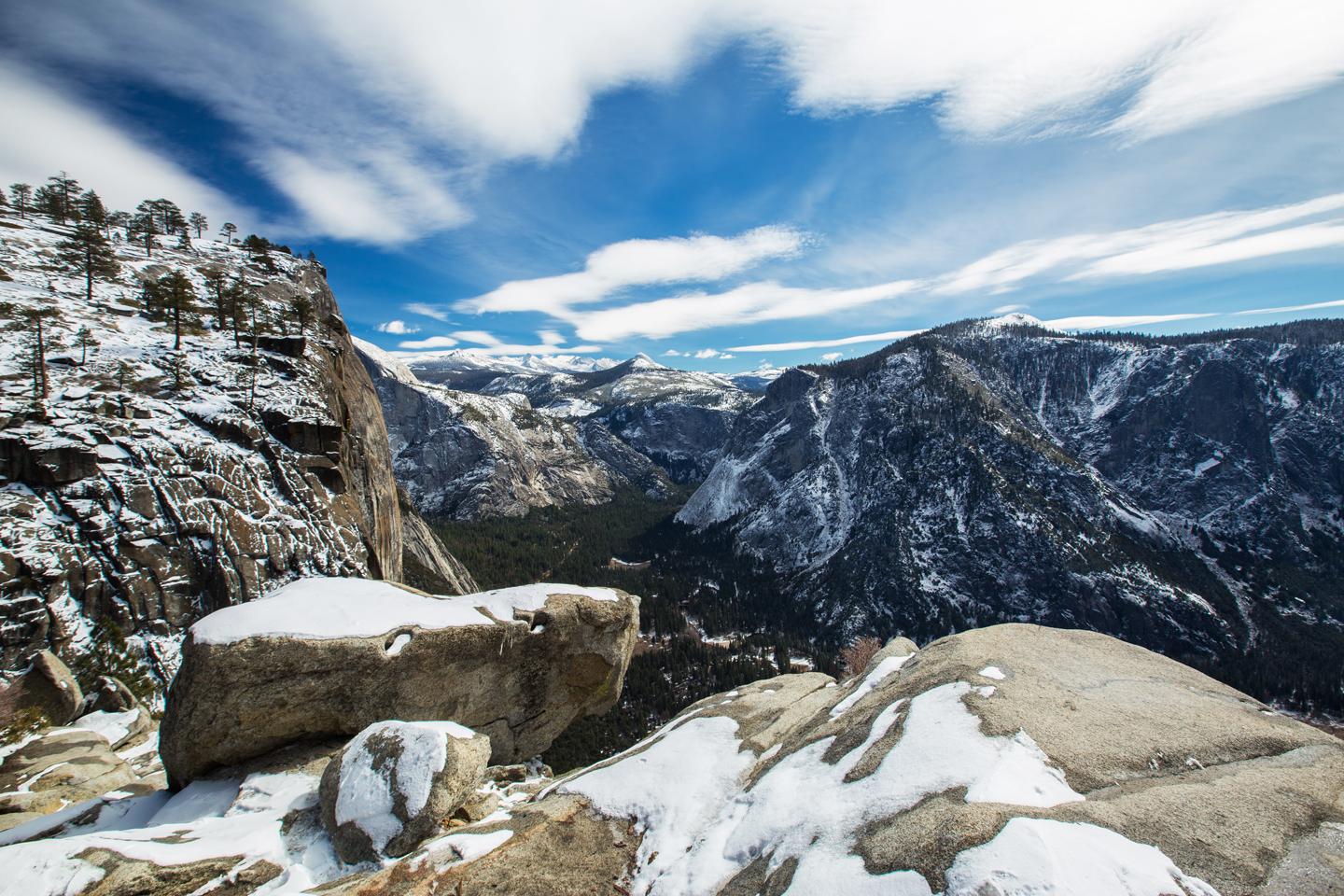 The last 0.2 miles are a welcome sight and relief after the slow switchbacks along the way to Upper Yosemite Falls. There is quite a bit of room to walk around at the top, and we enjoyed lunch with an incredible view. 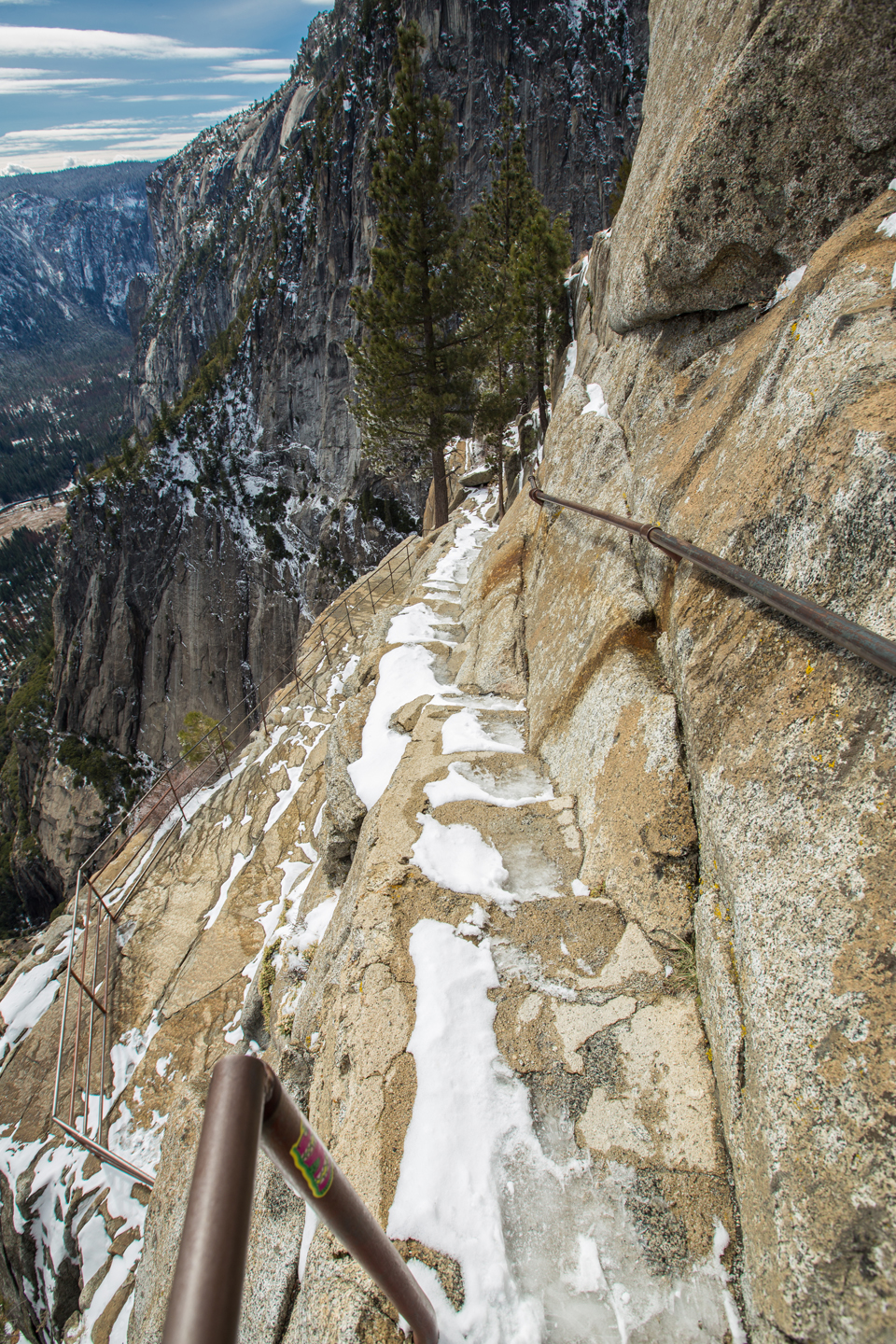 A further walk takes you down closer to the edge of the falls. We explored a bit, but didn’t end up going all the way to the end because the steps down were icy and looked treacherous. 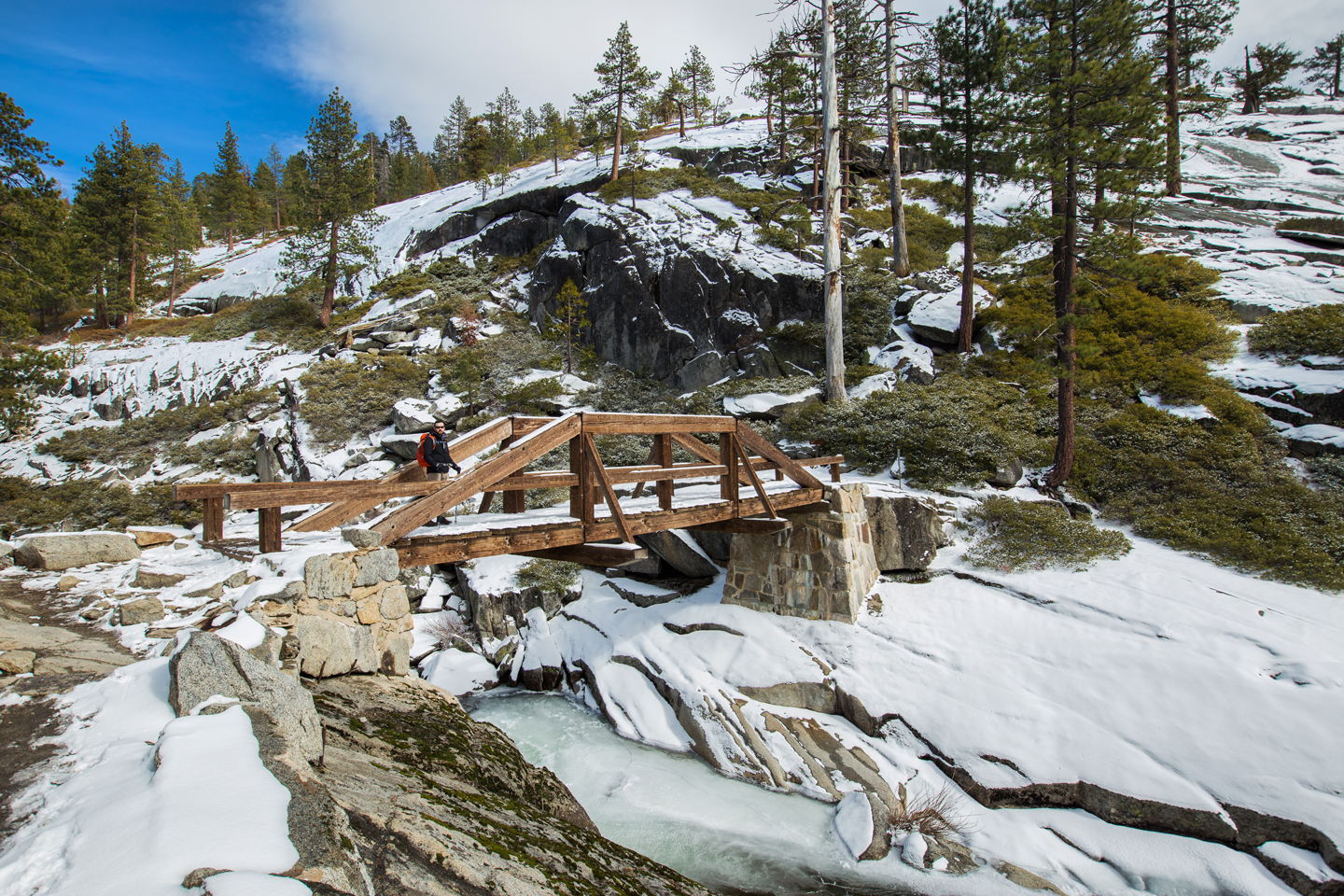 An additional mile from the Upper Yosemite Falls viewing area, Yosemite Point provides incredible vistas of the valley below. Julie and I had decided beforehand that as long as the conditions were favorable, and we weren’t too exhausted, we would make the additional trek. Once we reached Yosemite Point, we were glad we put in the extra effort. 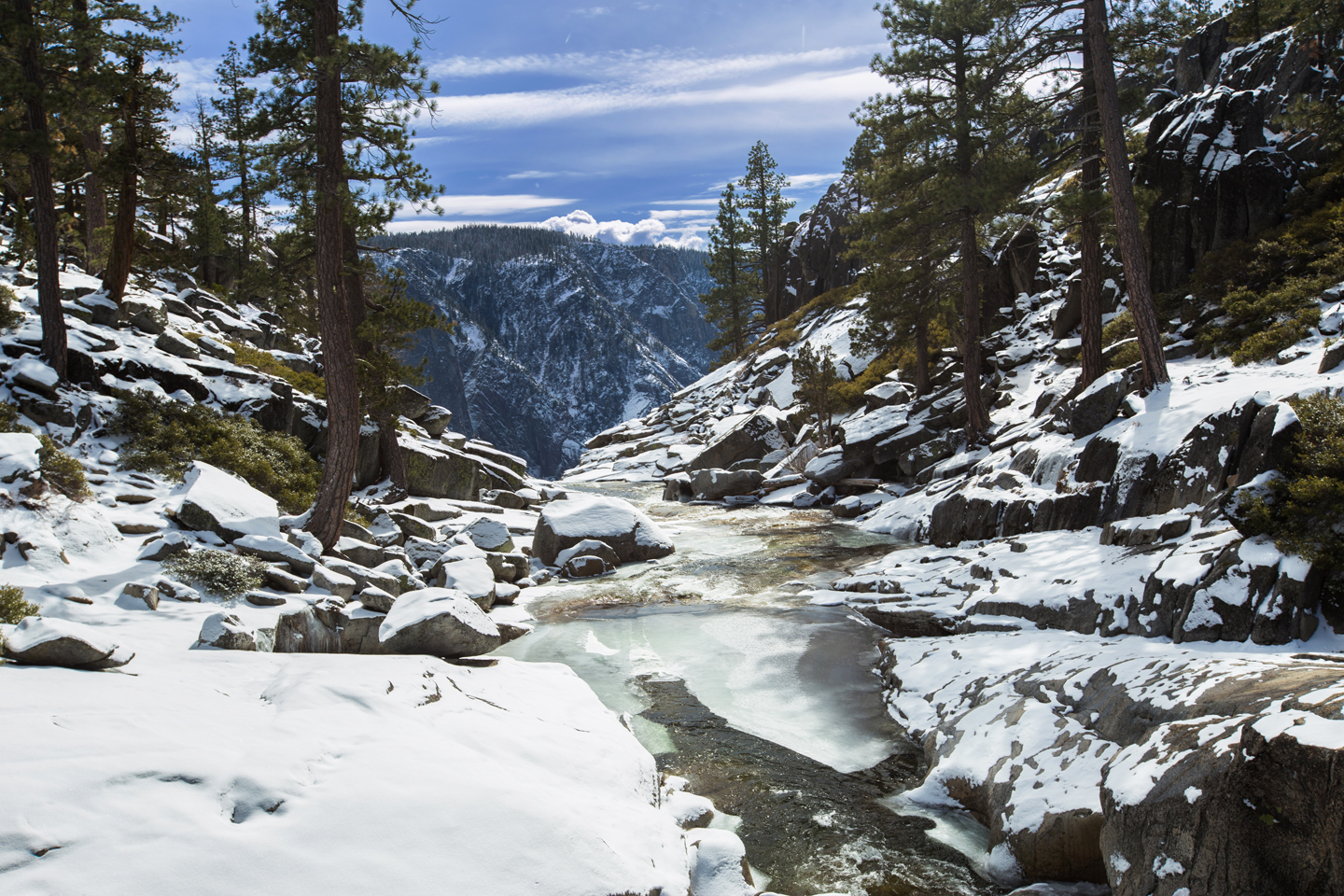 Leaving from the top of Yosemite Falls, the trail descends briefly, crossing a bridge over Yosemite Creek. It’s amazing how this small creek leads to such a powerful waterfall just a few yards downstream. Once we had crossed the bridge, the snowy trail begins climbing up through a few small switchbacks. At times, we were likely off the trail as it was covered in snow in many places. Before long, we reached Yosemite Point, and the views were incredible! 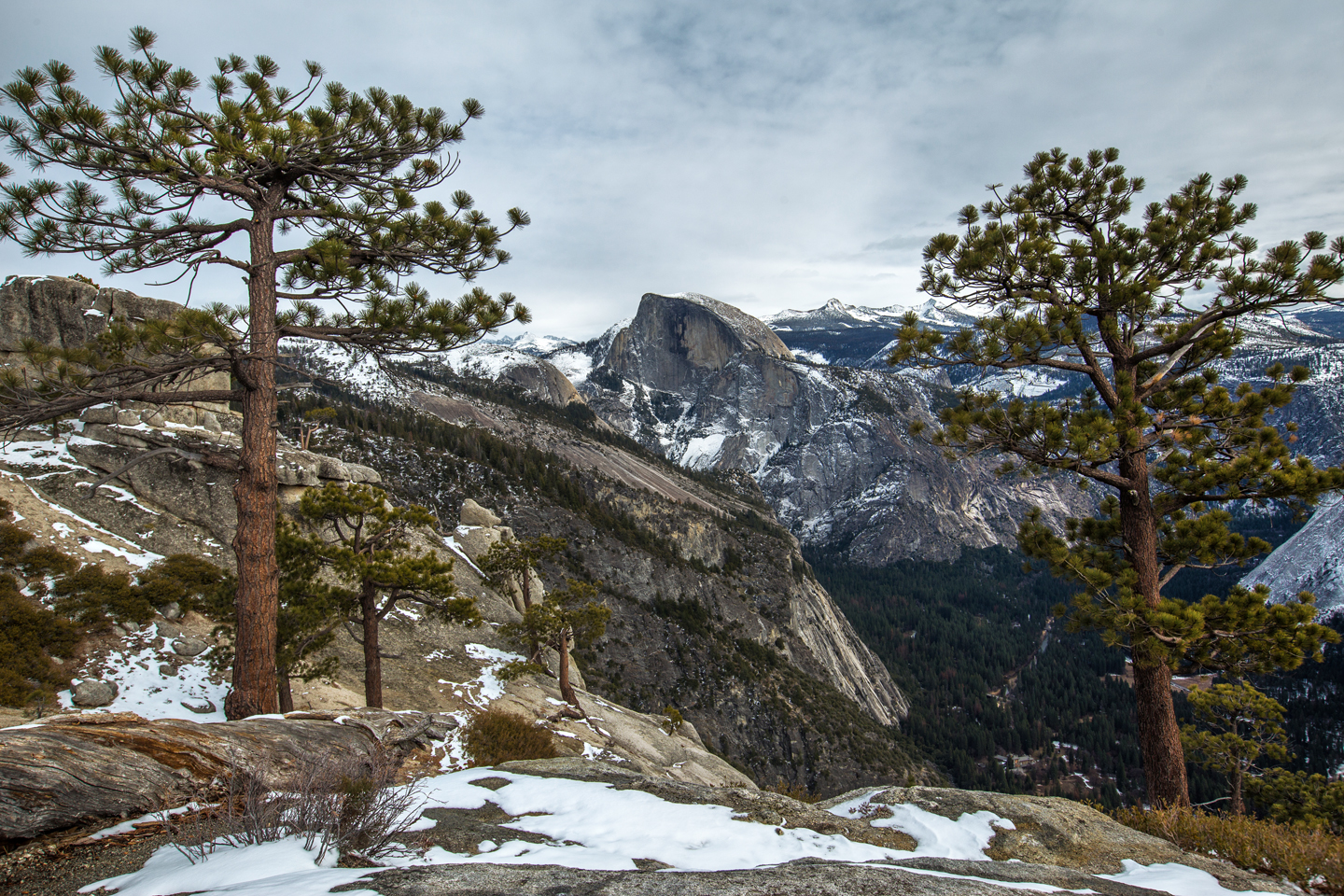 Soaking in our surroundings, we were thrilled that we made it all the way to Yosemite Point. Walking around and exploring the area, we found additional vantage points, and admired Half Dome in the distance. Realizing that it was getting later in the day, and we still had a long trek back down the mountain, we said goodbye to Yosemite Point and began our descent.

Hiking Down from the Top of Yosemite Falls 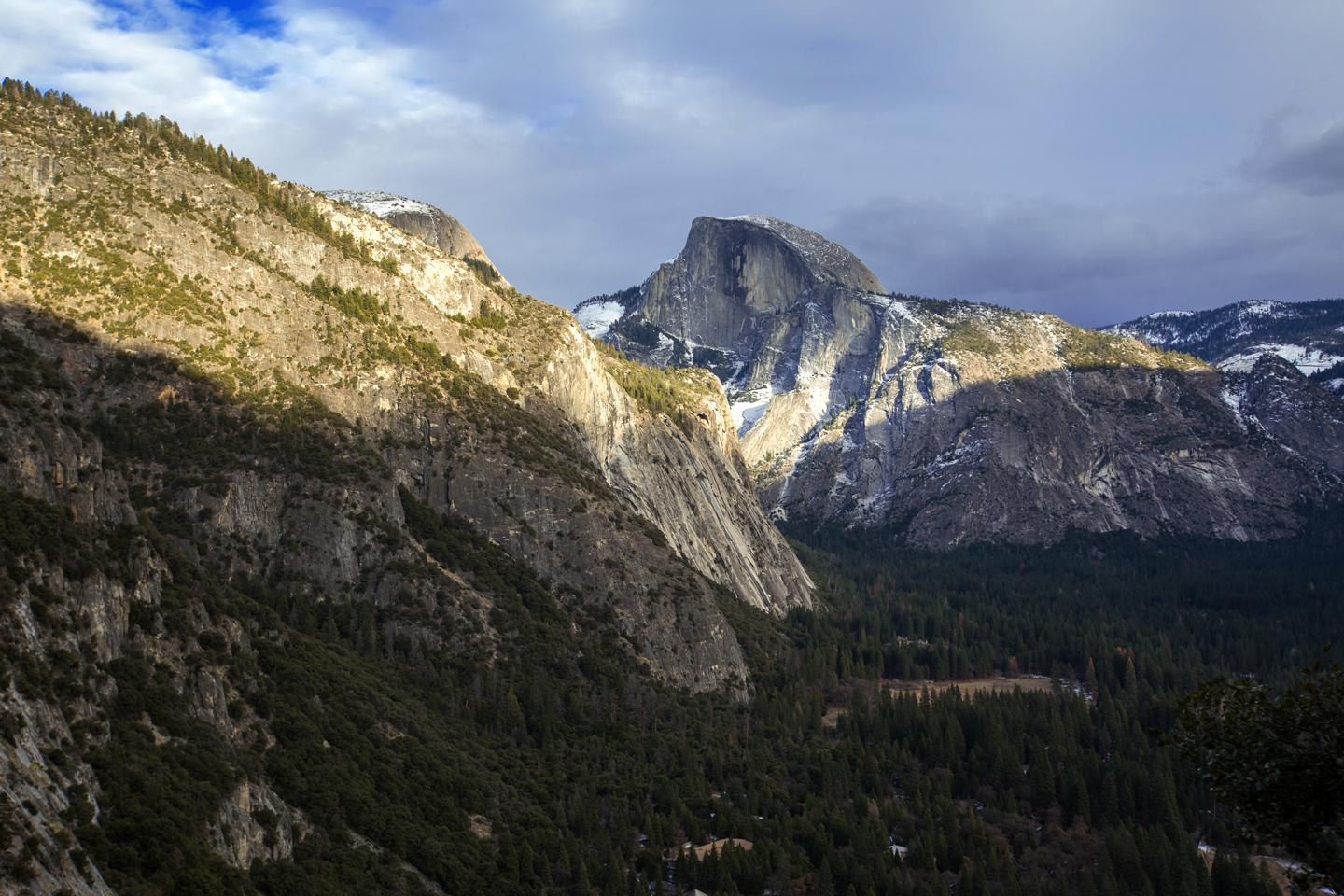 The trail down was a bit tougher than going up as there were a number of rocks making it slow-going and tough on our weary legs. We alternated between wearing our spikes and taking them off, but ultimately went with the later as much of the snow had melted during the day. 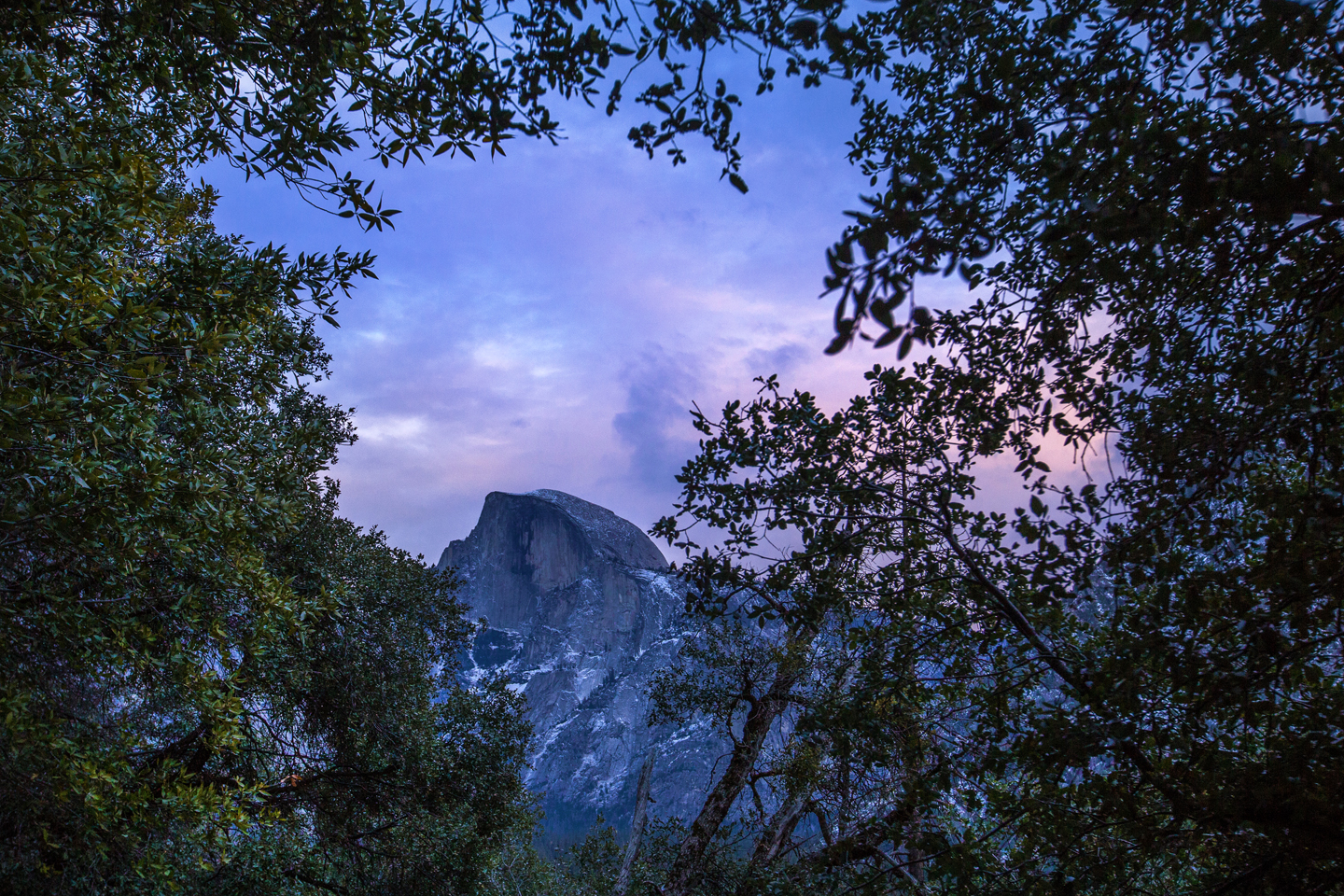 As the sun had nearly set, we finally reached the bottom of the trail and were back at our room. Exhausted, we showered and enjoyed our pre-cooked spaghetti and meatballs and called it a night!

Have you been to Yosemite? Would you do the Yosemite Falls Hike to the top? Let us know in the comments! 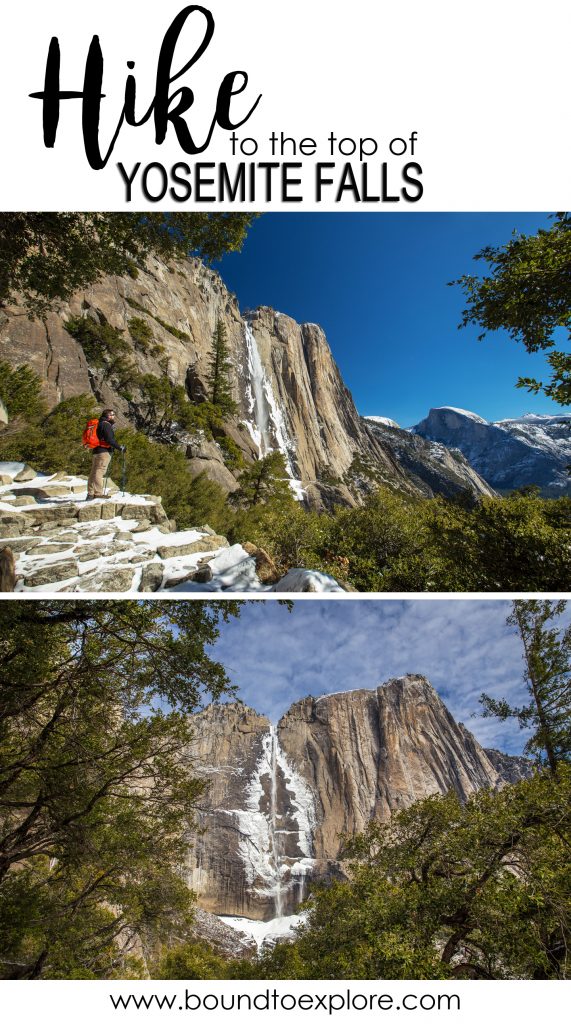