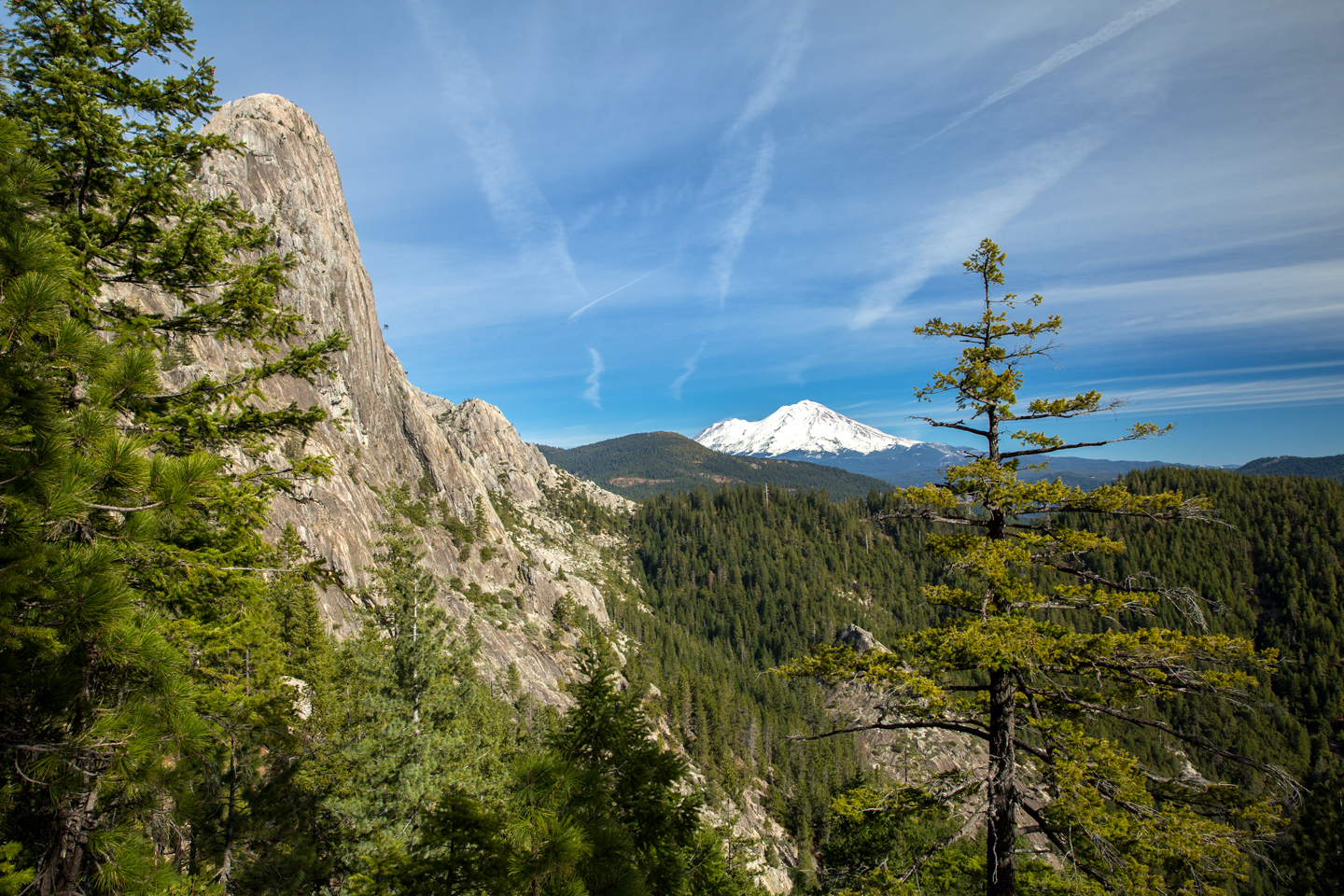 One of the very best aspects about living somewhere new is the opportunity to explore your surroundings and uncover new adventures.

Northern California has reinvigorated the love we have for our home state as we get to know the upper half of the state after spending our entire lives in the South. While we live near some local hikes, namely in the Santa Cruz Mountains to the west, the larger peaks and alpine hikes we crave require a bit more of a road trip.

We had previously driven through the Mount Shasta region of Northern California (aka the far north) when we visited Crater Lake last summer, and knew we wanted to return to this area when the weather was more temperate. Eager to start off 2018 with our feet on the trail, we made plans to check out Castle Crags State Park, and its namesake hike to Castle Dome.

Browsing through one of our favorite outdoor sites, All Trails, I stumbled across a hike just south of Mount Shasta named Castle Dome. With its hints of Yosemite-like granite rocks, I quickly bookmarked the hike for a future weekend.

We caught a glimpse of the granite peaks in passing through the area over Fourth of July weekend, making us more excited to return to explore the park. While our initial plan for this hike had been at the end of January, a brief weekend snowstorm forced us to reschedule two weeks later in early February.

Since Shasta is a good four hours from the South Bay, we decided to make a weekend of the adventure rather than an incredibly long day trip. We booked our hotel room in Redding, the largest city in Shasta County and made plans to drive up Friday night after work (and traffic).

How to get to the Castle Dome Trail 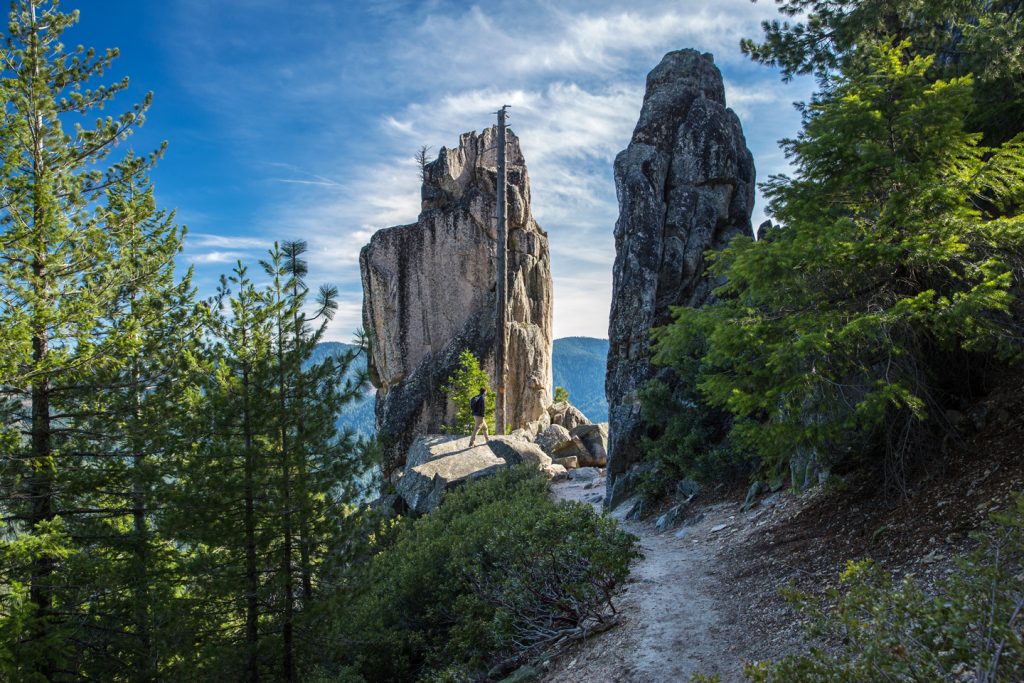 The drive from the San Jose area to Redding is about four hours, depending on traffic. Leaving at 7:30 p.m. on Friday, it took us about that long to get to our hotel, including a quick stop for gas along the way.

After taking 680 North towards Sacramento, we split off on 505 North, eventually merging onto 5 North for the remainder of our drive. Arriving at our hotel just before midnight, we quickly went to sleep and were up early the next morning and back on the road after breakfast.

From Redding, it’s another 50 minutes to Castle Crags State Park, and our plan was to be on the trail no later than 9:00 a.m. as early starts are essential! 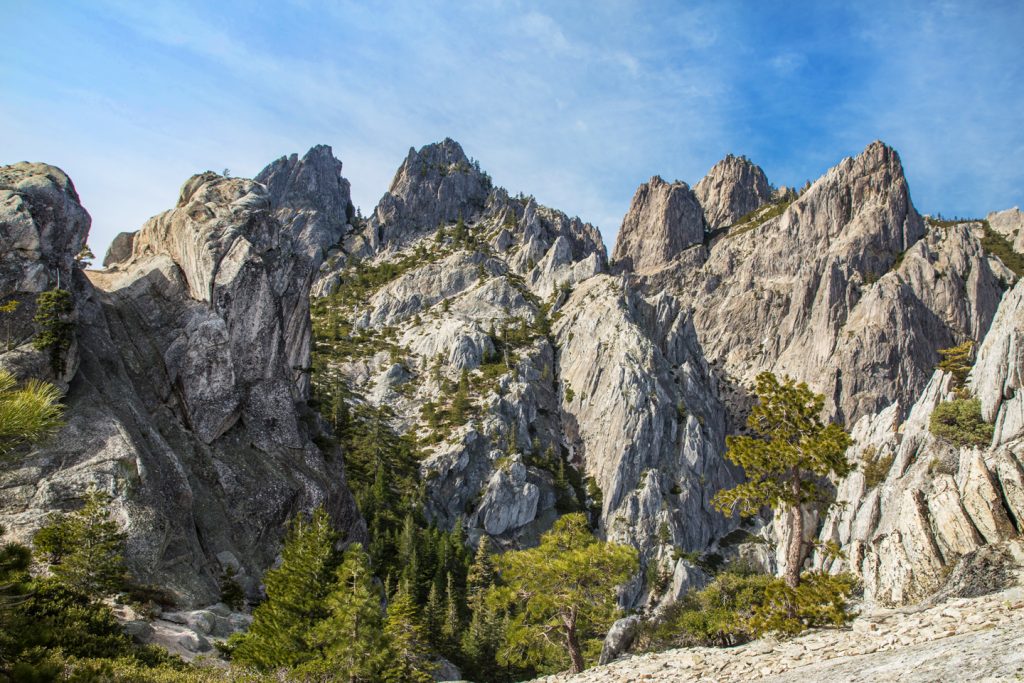 When we first arrived at the park entrance, there was a small booth where you need to pay a self-registration fee of $8. Since the booth was unmanned, we headed back to the nearby gas station to get exact change before returning to the park.

The drive from the entrance to the trail head is short, but windy, and a good section is only one lane. We were glad to have arrived early enough that there weren’t any cars heading in the opposite direction because it would have been a tight squeeze to get by!

Julie had done some research on parking at the trail head, which indicated that there weren’t many spots, and they often filled up fast. If the lot was full, we would have to add another mile to our hike and park further away. Much to our complete surprise, we were the first to arrive at the small parking lot, followed closely by another car behind us.

Jumping out of the car, Julie and I were hit by the sudden realization that we had forgotten our gloves and beanies, and it was freezing! We had focused our attention more on the high temperatures for the day, but neglected to remember that at the outset, it would be chilly. I threw on my lightweight puffy jacket and my rain shell with a hood while Julie put on her double-layered jacket. Knowing that once we started the hike, we would begin to warm up and need to shed the layers, we eagerly hit the trail. 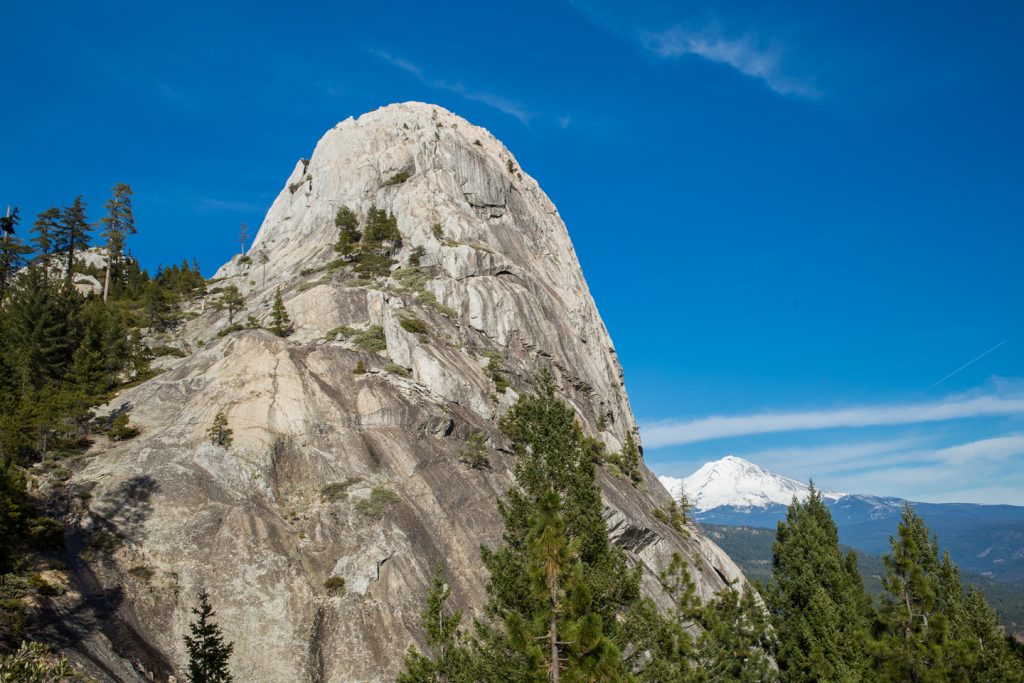 The Castle Dome hike is 2.8 miles each way, or 5.6 miles roundtrip and gains around 2,100 feet of elevation. From the information we had read prior to the hike, we knew this was going to be an uphill climb, and were greeted with it immediately. 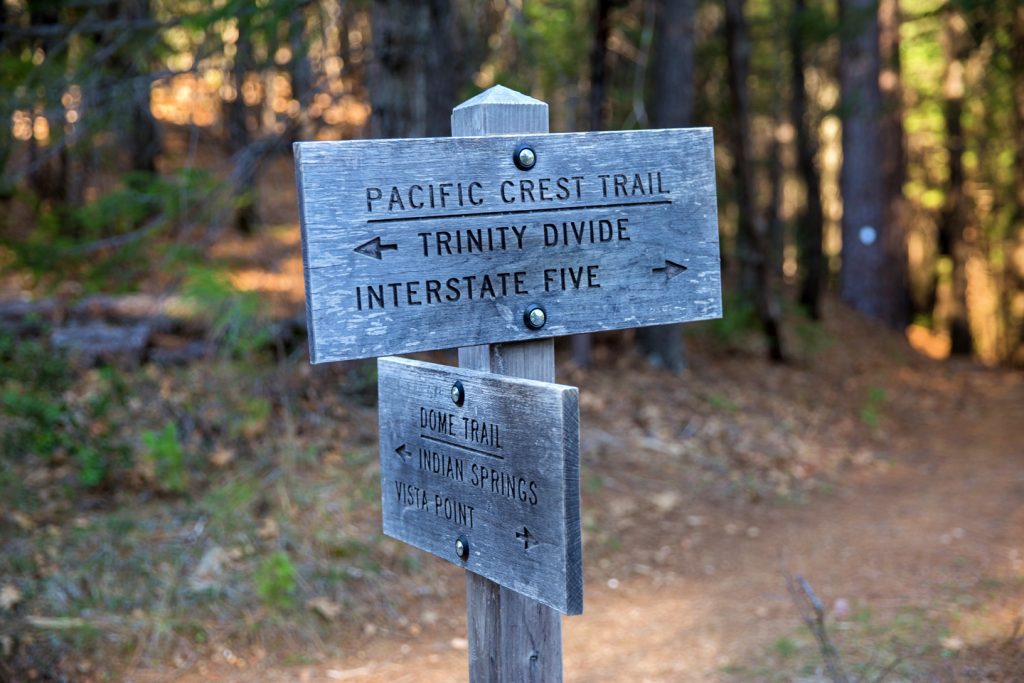 After a short, flat section of the trail, we turned left for the Castle Crags Trail and began our ascent.

Quickly, we reached a junction with the Pacific Crest Trail (PCT) marker, which is always a fun sight, before continuing along the Dome Trail. This first section of the trail climbs steadily through the forest, and is definitely a leg burner! Every so often, we caught glimpses of the granite peaks in the distance as we kept our momentum slowly pushing ahead. 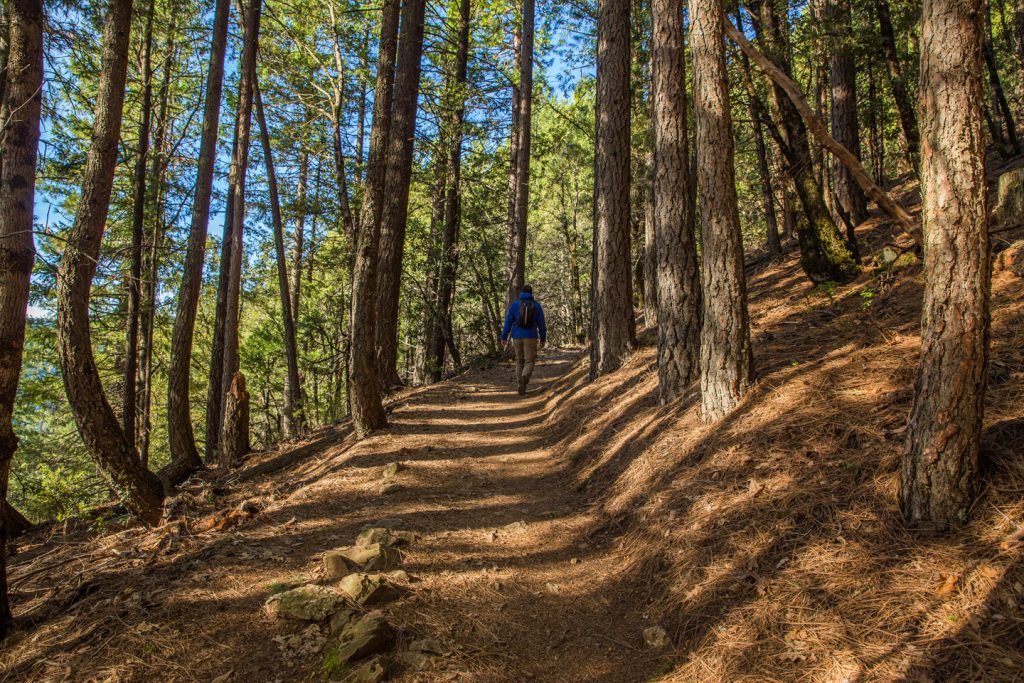 As we began to step out from the forest, we caught our first glimpse of snowy Mt. Shasta in the distance. By this point we also had views of the granite peaks and our final destination, Castle Dome. The trail continues to climb and from here becomes a bit more rocky. We stopped frequently for photos of the beautiful scenery that surrounded us before pushing ahead, eager to reach the top. 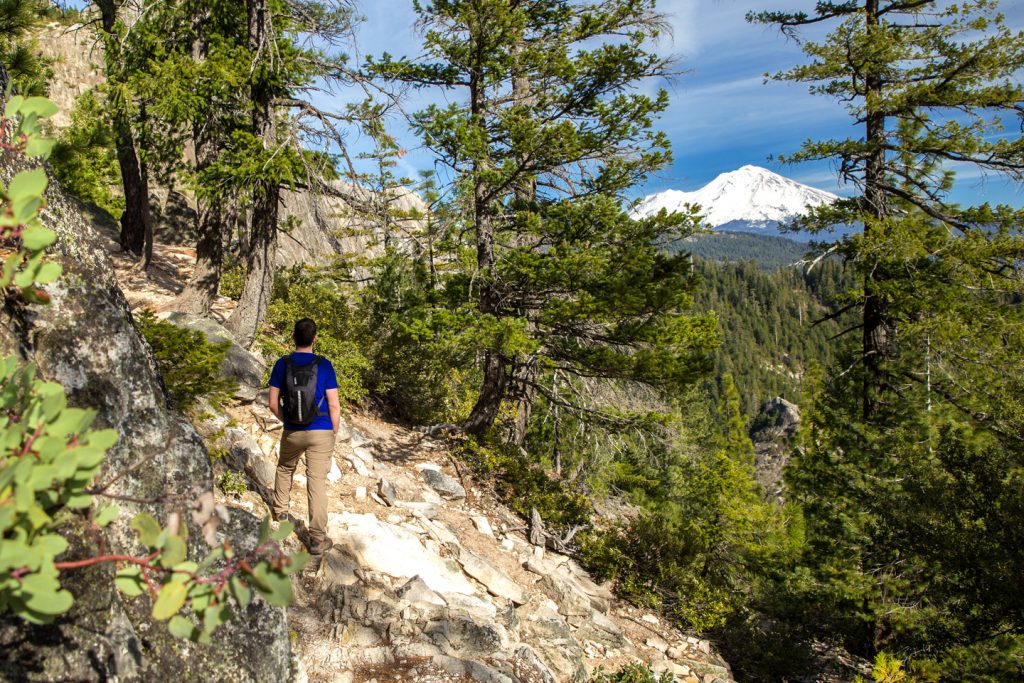 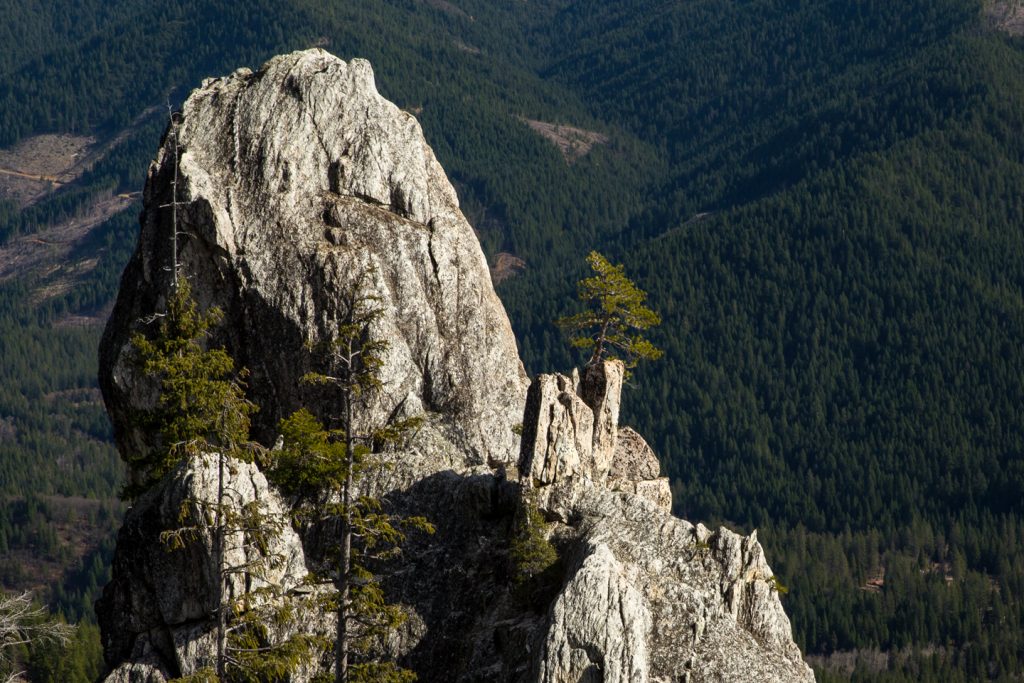 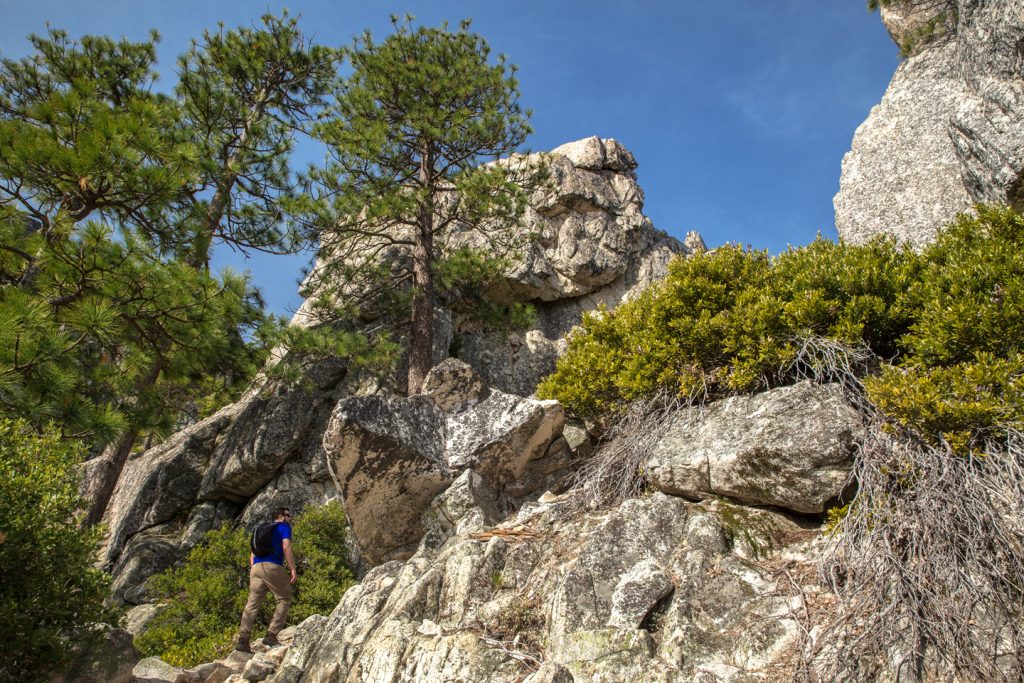 Near the end of the trail, we made a wrong turn and started walking through overgrown brush and a downed tree. A couple of guys who had caught up to us, decided to continue on this way, but Julie and I turned back and immediately realized the obvious error of our ways. Back on the trail, we quickly reached the official trail end and began to explore the area. 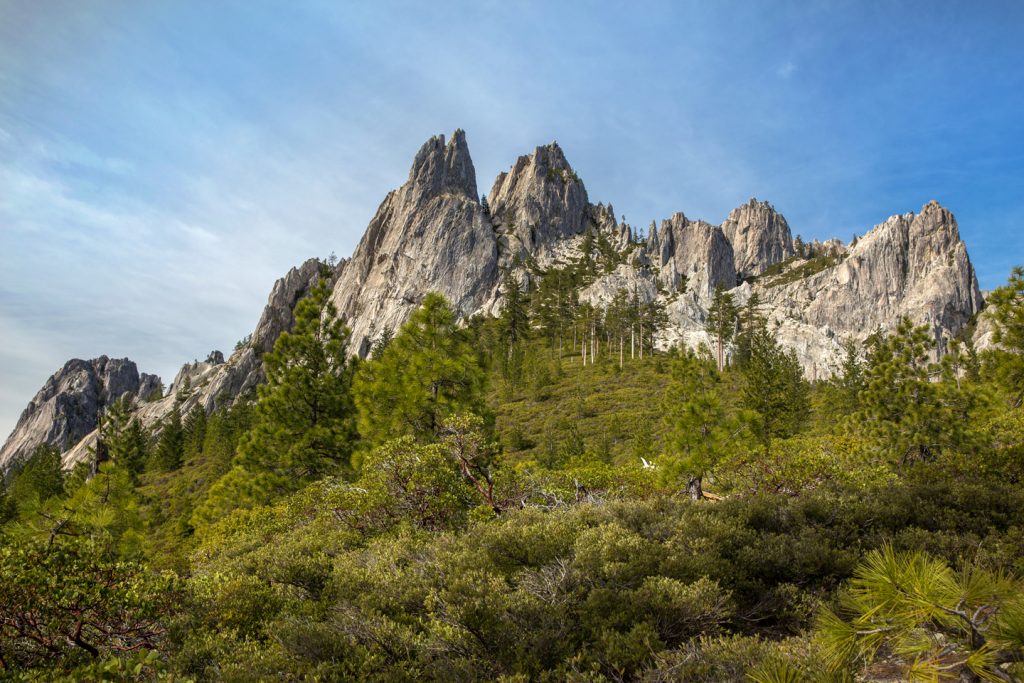 While it is possible to climb to the top of Castle Dome, the journey requires experience and proper gear, so we opted to admire it from a safe distance.

One of the best parts of the Castle Dome area is the amount of space to spread out and enjoy the views once you reach the end of the trail. We climbed to a viewpoint and sat alongside other hikers, enjoying direct views of Mt. Shasta in the distance. Because it was cold and windy, we only sat for a short while before moving to an area with some wind protection where we enjoyed our sandwiches and the surroundings. 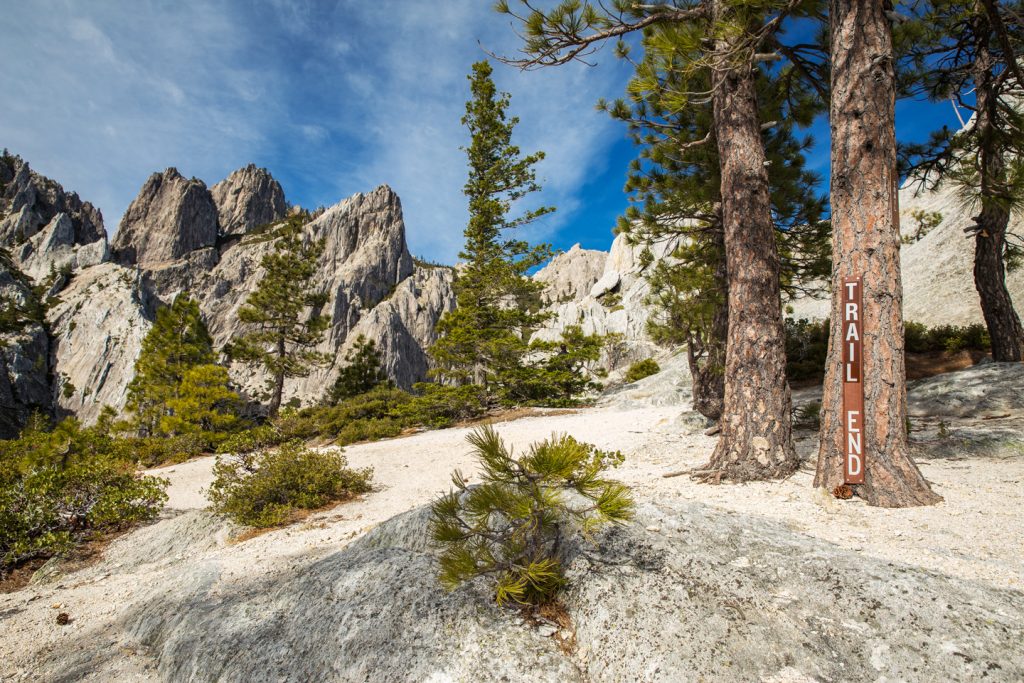 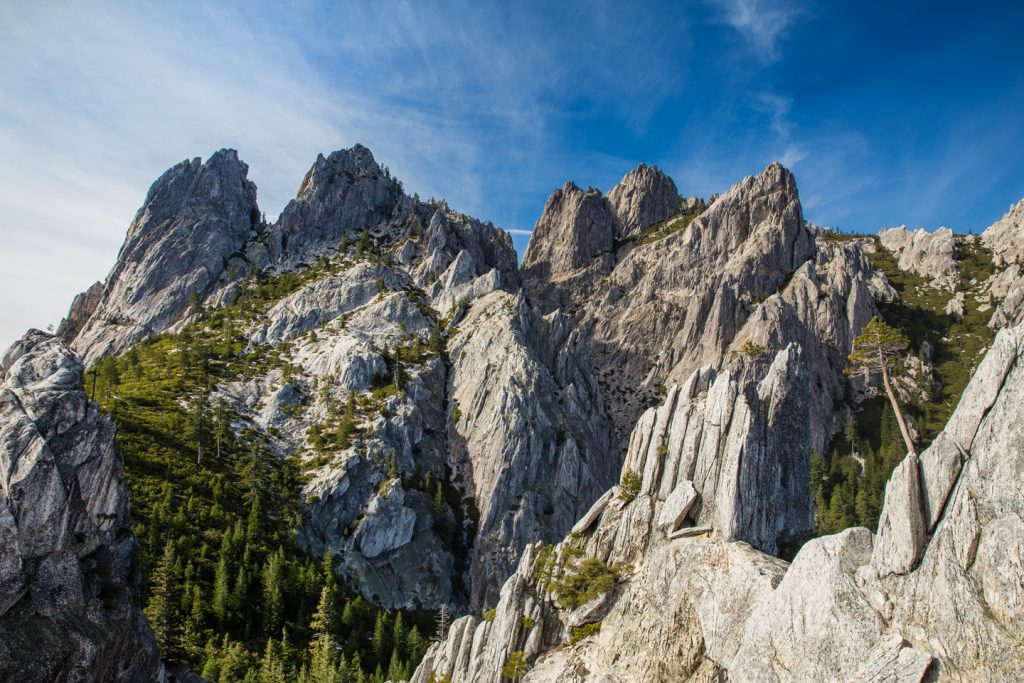 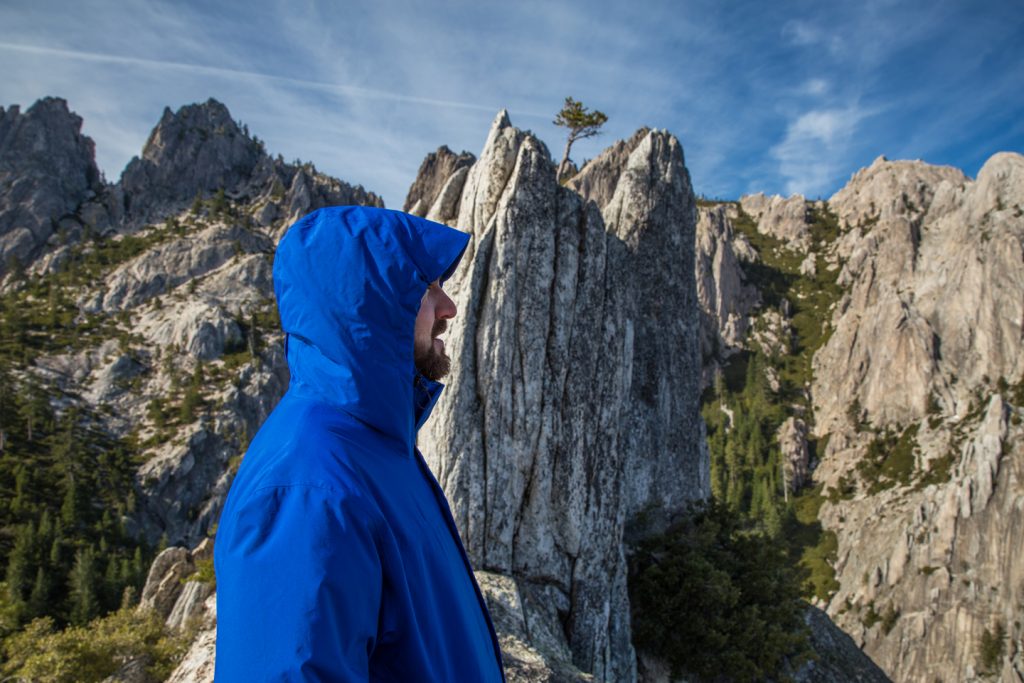 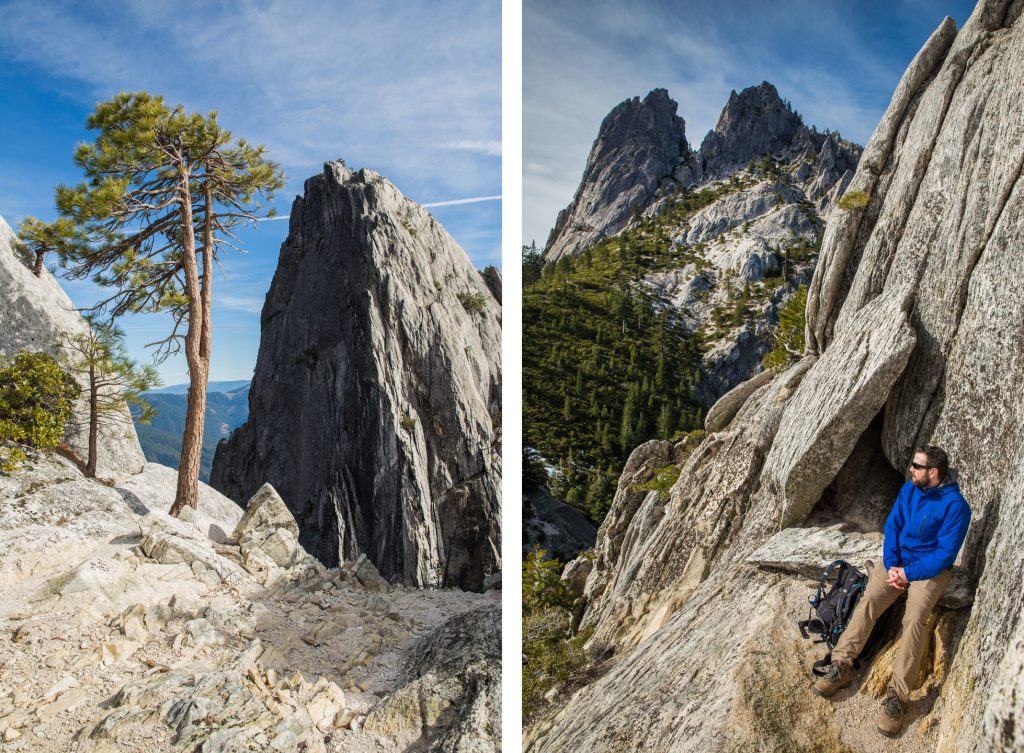 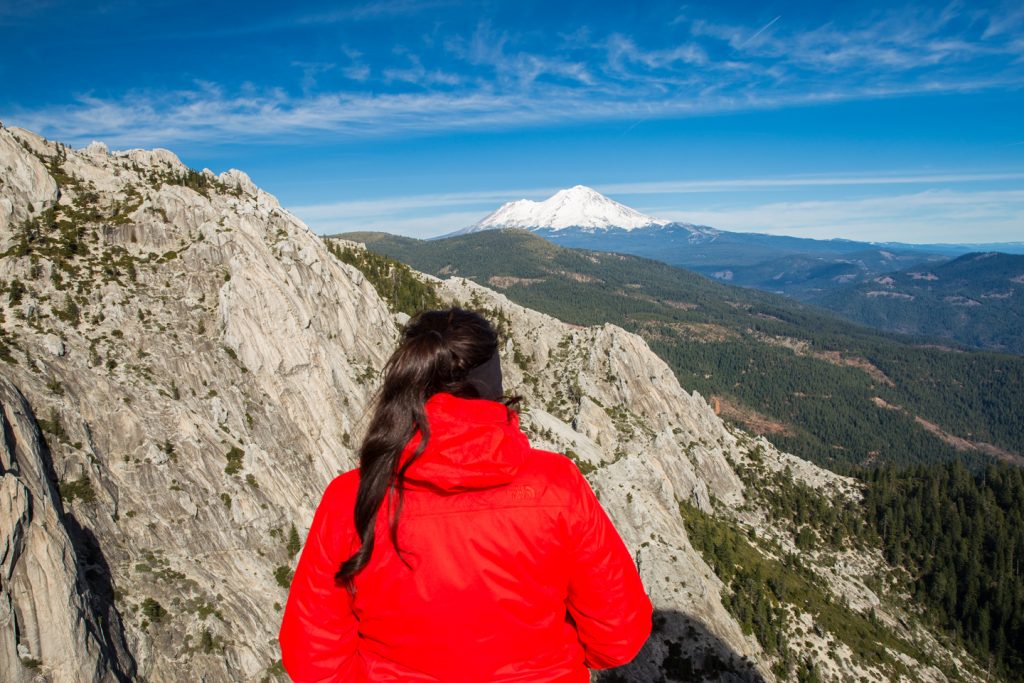 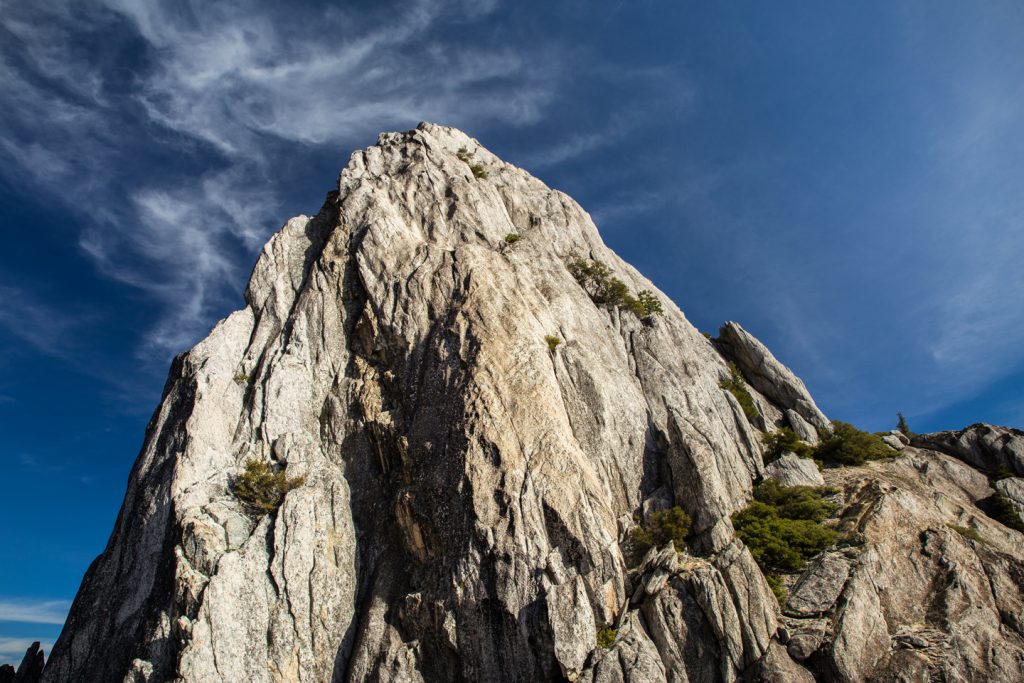 With our bellies full, we spent the next hour or so, exploring the granite peaks and enjoying the cool weather. It was truly a difficult feat to eventually pull ourselves away from such a beautiful spot, but we had more plans for the day and needed to get back down to the car.

Heading downhill was much quicker than the hike up had been, but we longed for our trekking poles to take some of the strain off our knees. Back at the car, we unloaded our gear and enjoyed a well deserved opportunity to sit down. 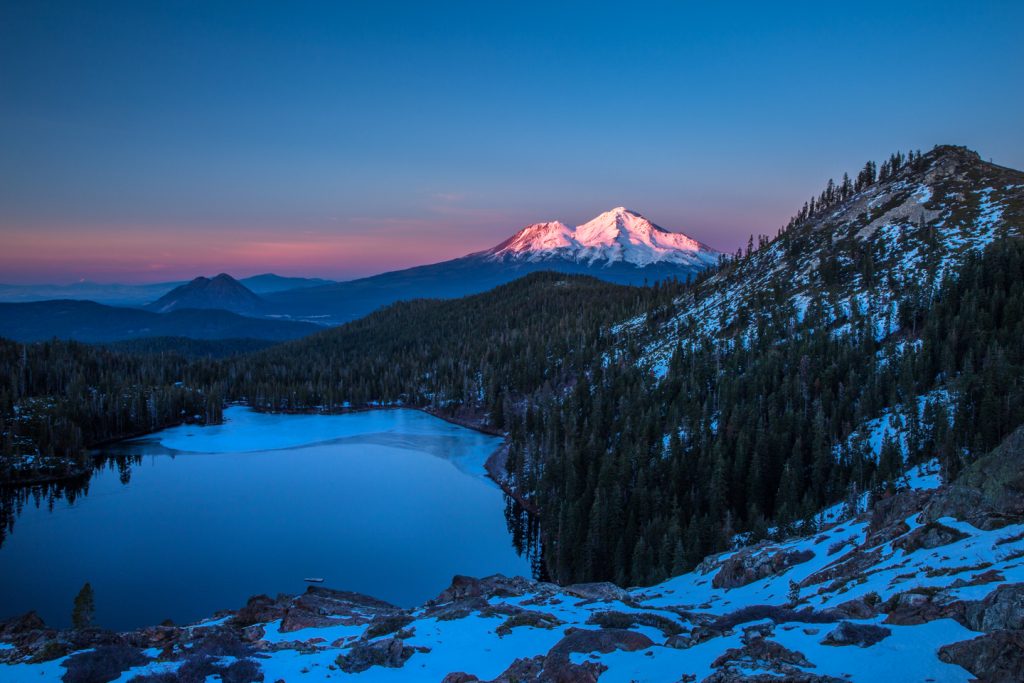 Thoroughly exhausted from our hike to Castle Dome, Julie and I were happy to be back in the car. However, we still needed to find a place to take sunset photos before we called it a day and headed back to our hotel in Redding.

Julie had done some research ahead of our trip and, we had a couple of potential options of where to shoot. Following a brief stop at Lake Siskiyou, we decided to go with our original idea, hiking to Heart Lake.

The trail to Heart Lake starts at Castle Lake, about 10 miles from Lake Siskiyou. When we reached the trailhead, there were a couple of other cars parked and we quickly realized that this trail was going to be snowy. Fortunately, Julie had remembered to pack our micro-spikes, which meant the trek would be a bit more manageable.

We ran into another couple who had made their way back down after hiking in the area and they pointed out where Heart Lake was. By this point, it was 5:00 p.m. and we only had about 30 minutes of daylight left. Julie and I strapped on our spikes and hit the trail hoping to get to the lake, or at least close to it before the sun went down. 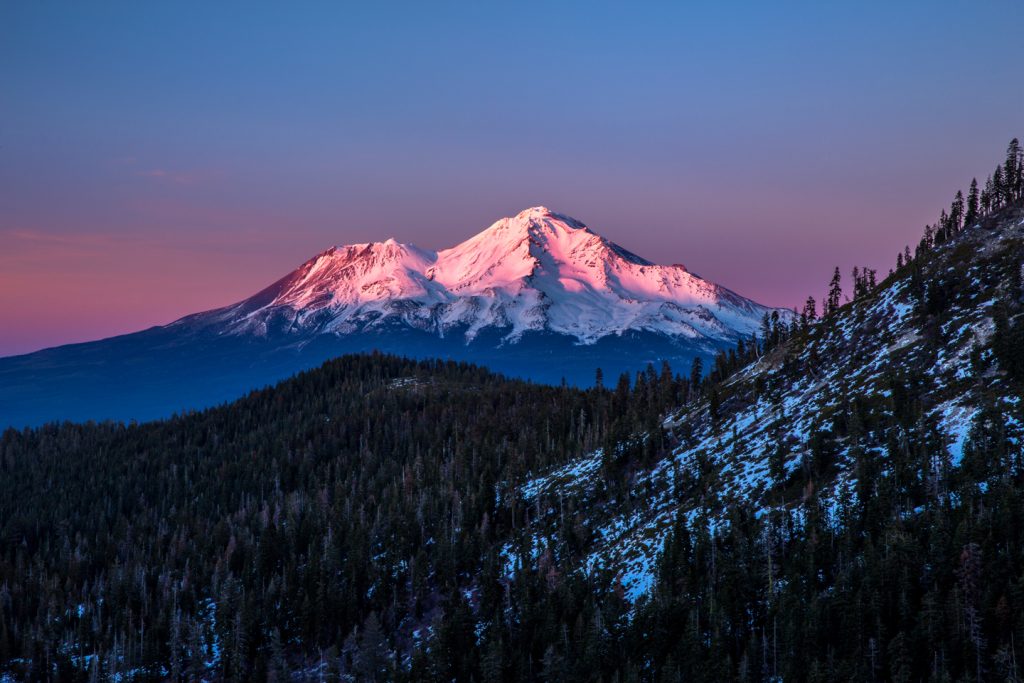 Despite hiking 7 miles just a couple of hours earlier, we found ourselves with renewed energy as we hit the trail. While there were patches of dirt, the trail was entirely covered in snow almost immediately.

Moving swiftly, we began climbing over snowy ridges, hoping to find Heart Lake and catch a glimpse of the sunset. Before long it became apparent that we were not going to make it to Heart Lake  in time, and Julie found a place to set up shop to catch the fading sun.

I continued climbing a bit higher still thinking I might reach the lake, but was disappointed after climbing another ridge to find I had not made it. The views from a bit higher up were still beautiful, and we were happy to have made it as far as we did. Looking above me, I could see a couple of campers with a stove or fire going who must have actually made it to Heart Lake.

With the sun nearly gone, we began our descent back to the car, the temperature dropping along with us. We flipped on our headlamps, an item we were glad to have after previous misadventures on dark mountains, and continued towards Castle Lake below us. Finally back at the car, we jumped in, turned up the heater and hit the road. It was an epic day of adventure, and one we won’t soon forget.

*Update* We made it back to Heart Lake, and have a trail report here.

Have you heard of Castle Crags State Park? Are you interested in visiting now? Let us know in the comments!

More from the Redding and Shasta-Cascade Region: 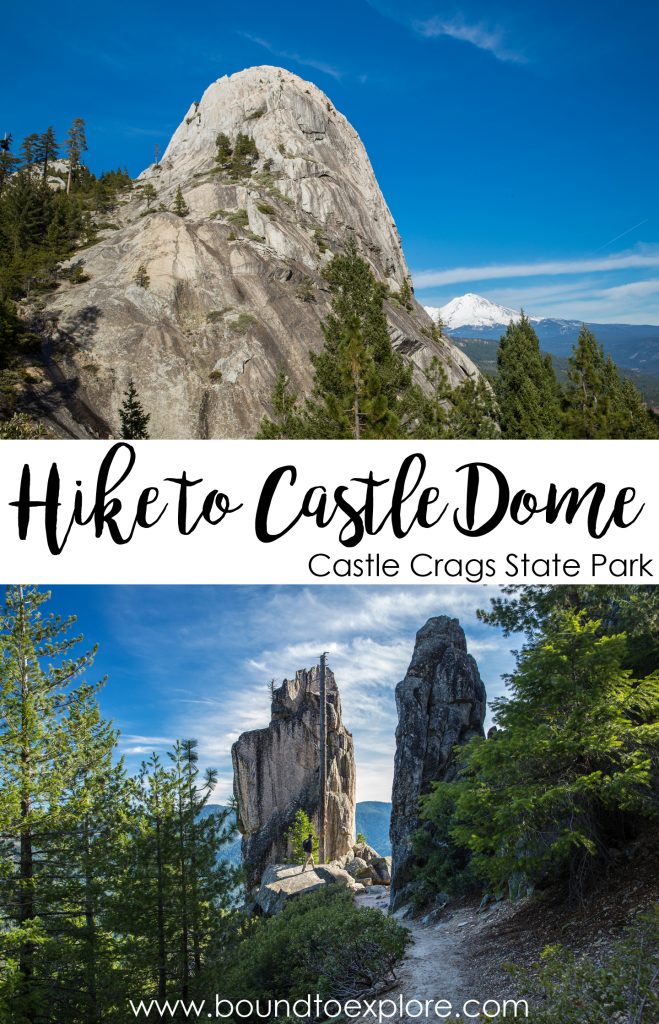