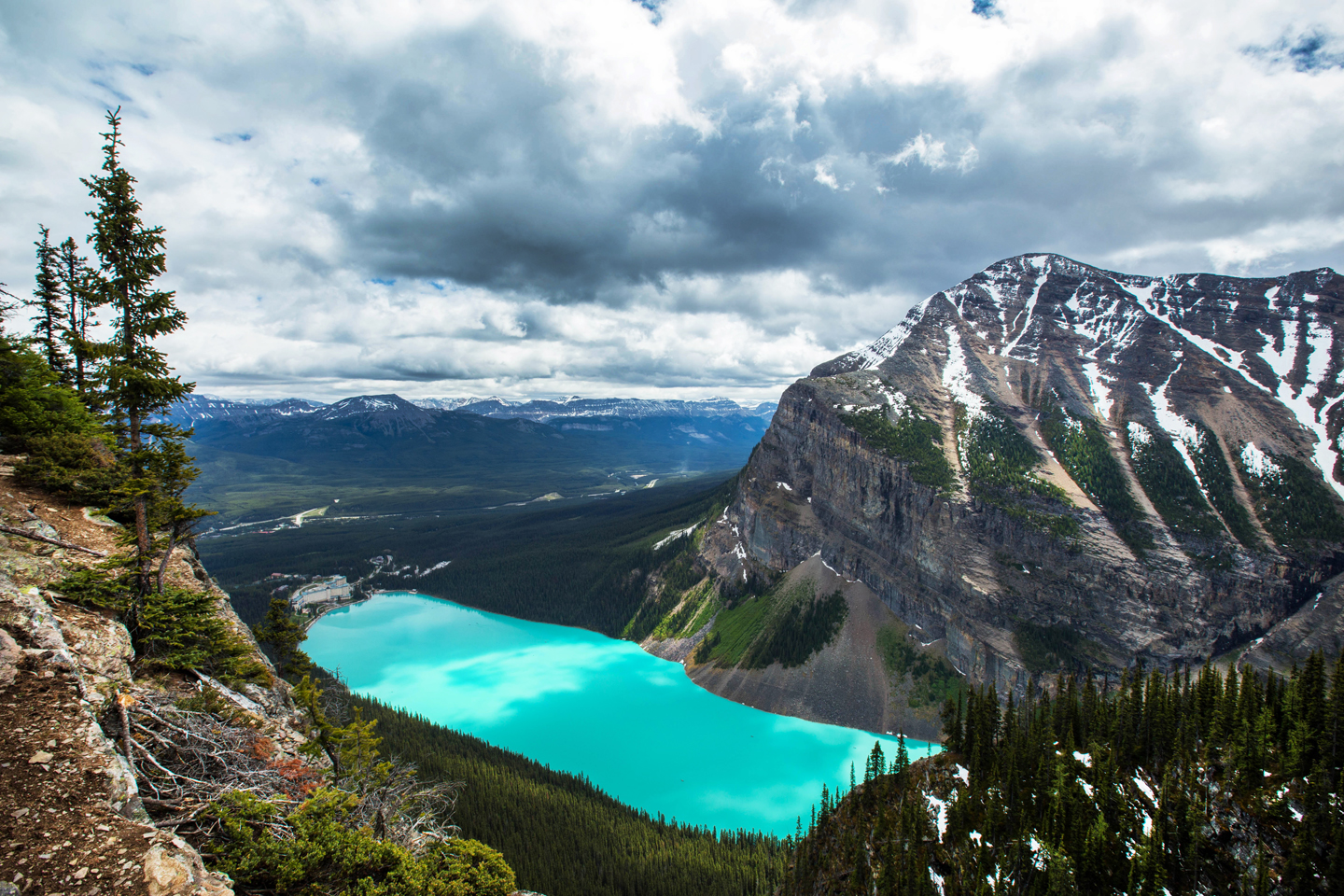 The Lake Agnes and Big Beehive hike is one of our favorites in Banff National Park. Alpine vistas, quiet pine forests, and a lakeside tea house make this adventure unforgettable.

When we originally made plans to return to Canada for a second time in two years, we had a lengthy list of hikes that we intended to accomplish. While we had perfect weather in August of 2016, our earlier season visit for June of 2018 meant we had to modify some of our itinerary with winter still in effect.

Having previously hiked to the Plain of Six Glaciers from Lake Louise, we were excited to venture to one of the other main attractions in the area, the Lake Agnes and the Big Beehive hike. Depending on the conditions when we reached the Big Beehive, we gave ourselves the option to extend our hike to a place called, the Devil’s Thumb which provides scenic views above Lake Agnes and Lake Louise. The forecast told us that Wednesday would be our best bet for avoiding inclement weather, so we packed up our gear and hit the road for an early start.

Distance: 9.60 miles, round trip (official distance is 6 miles to Lake Agnes, but we added on an attempt at the Devil’s Thumb which is 7.5 miles, and took a longer route back) 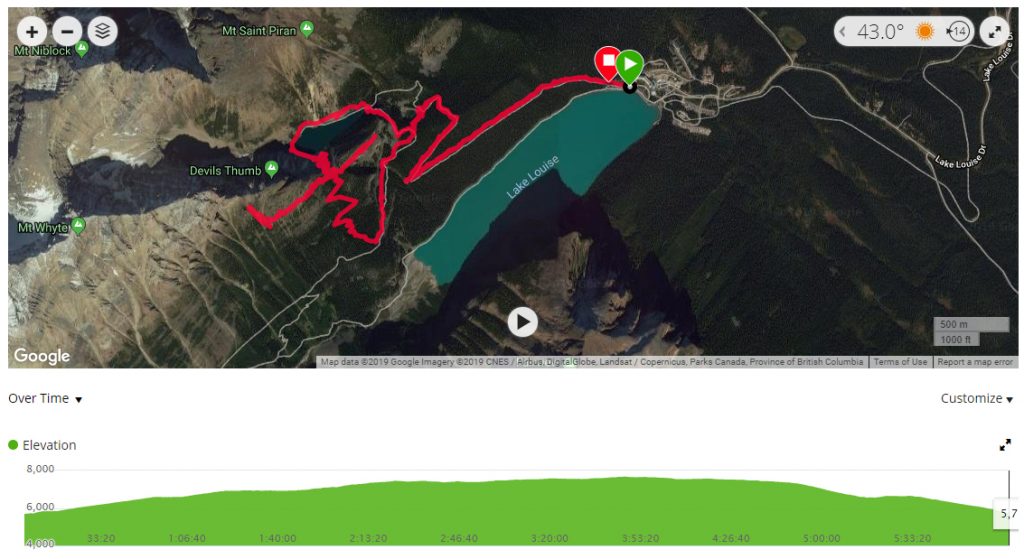 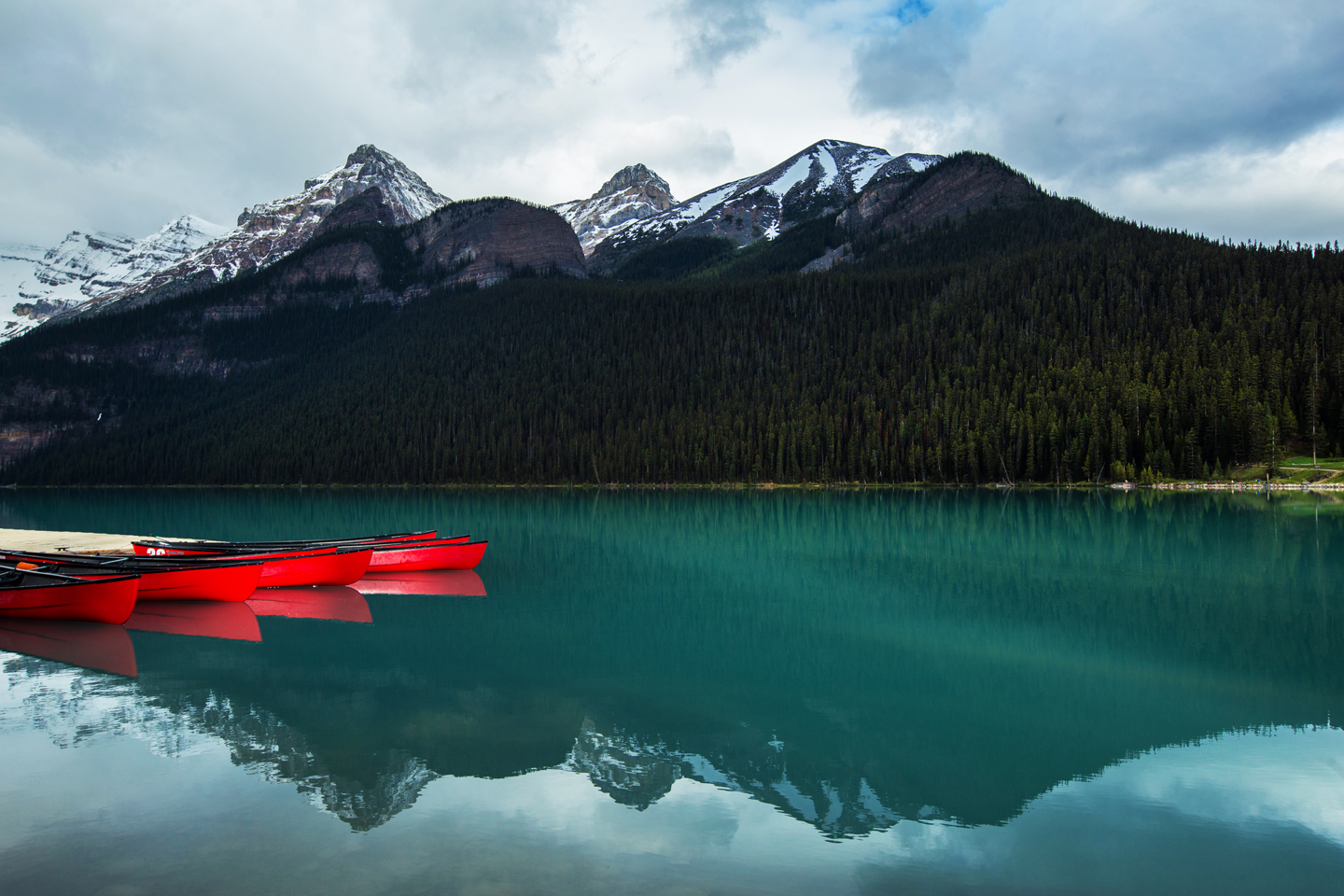 We learned the hard way on our first trip to Banff that you must arrive before 9:00 a.m. to have an assured parking spot at Lake Louise. This is also a pretty good strategy for beating the tour buses that bring hordes of visitors for a quick selfie at the lakeshore. Arriving just after 7:00 a.m., we were plenty early with only about a dozen or so other cars in the parking lot. We spent a few minutes walking the edge of the lake and enjoying its sparsely populate shores before it was time to start our adventure, the Big Beehive hike.

From Lake Louise, the trail to the Big Beehive passes by two lakes, Mirror Lake and Lake Agnes, as it ascends into the forest. The first part of the hike follows an uphill climb on a wide trail 1.6 miles (2.6 kilometers) to Mirror Lake. With clouds overhead and cooler temperatures, we started with our jackets on, but made the quick decision to remove layers as we began our climb.

In about 40 minutes, we found ourselves at the shores of Mirror Lake with perfect views of the Big Beehive. Here we spent a few minutes enjoying the lake, and took the opportunity to rest before we continued on our way to Lake Agnes.

There are two trails that lead to Lake Agnes from Mirror Lake, and we opted for the slightly shorter, and less crowded Highline Trail. This trail heads up from the left side of Mirror Lake and is just about a half mile to Lake Agnes. 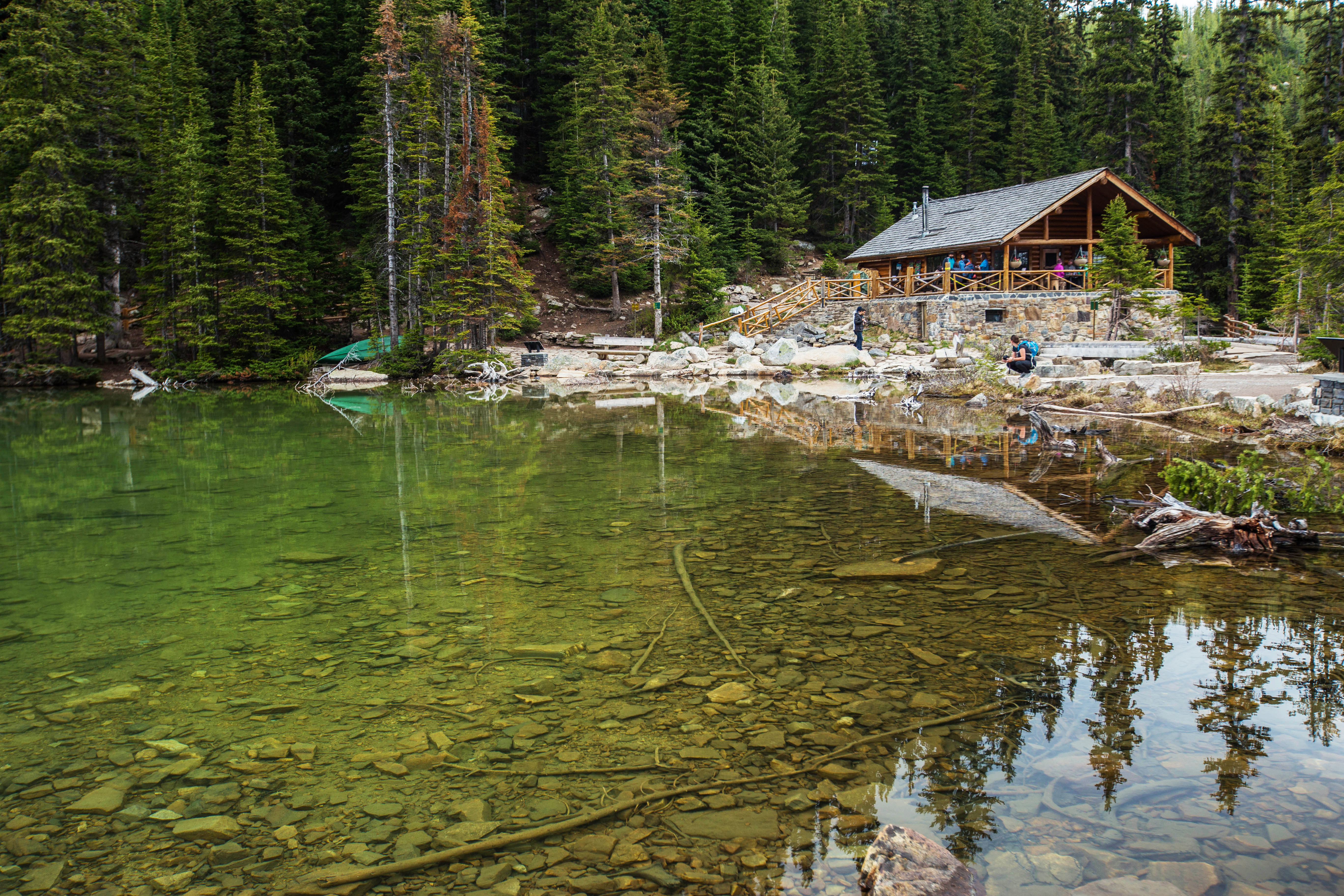 The Lake Agnes Tea House sits right alongside the shore and dates back to 1905! I spent a few minutes reading about the lake and a letter from a visitor in 1925 writing home to England, while Julie captured photos of the lake. 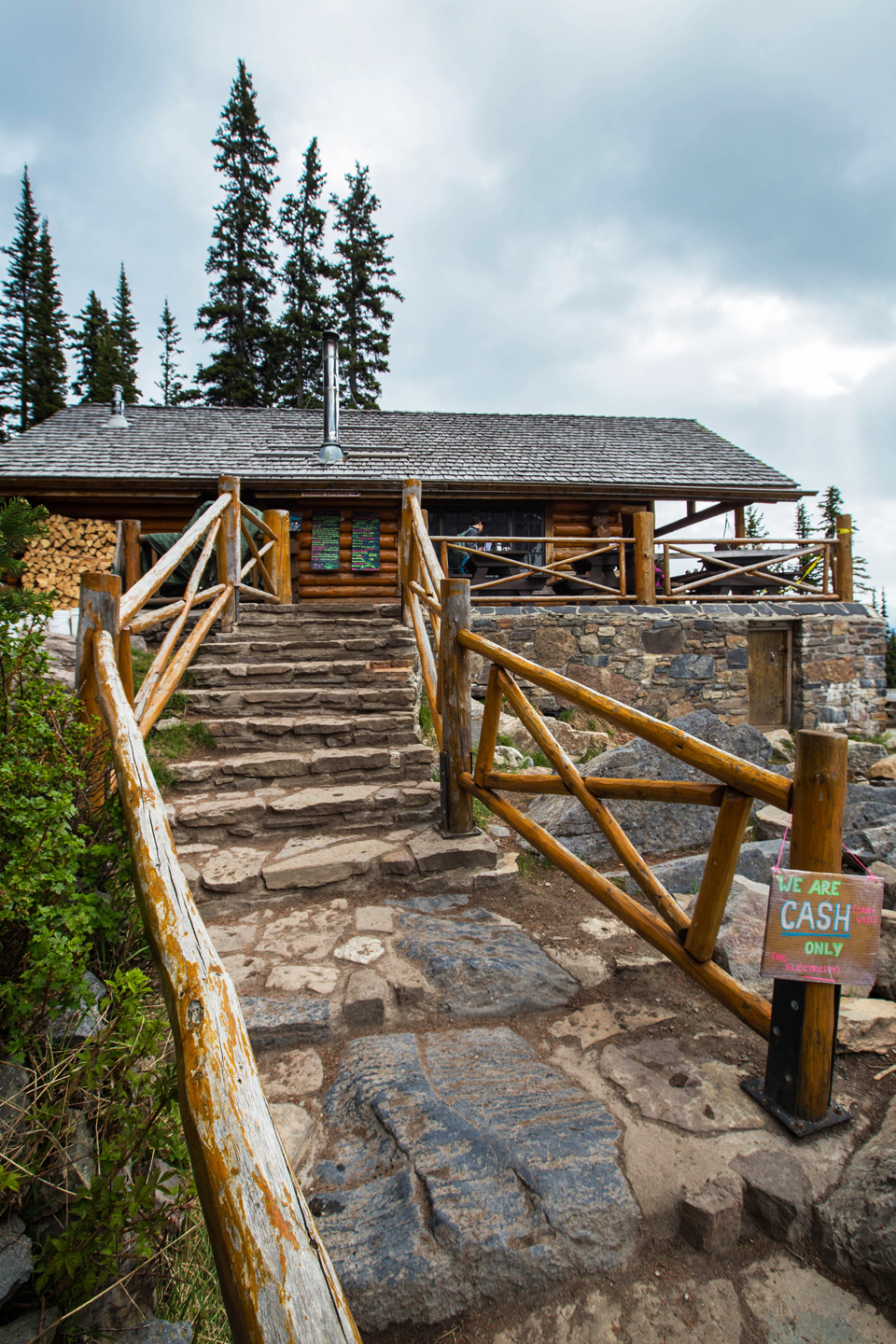 Much like every other lake we visited in Canada, Lake Agnes is a beauty. Situated at 7,005 feet, Lake Agnes definitely feels like a lake you would come across deep in the backcountry, but is instead very accessible. If you are looking for a shorter adventure, we recommend having tea and a snack, taking in the views of Lake Agnes, and then heading back down. The Lake Agnes Trail roundtrip is about 5.8 miles.

Unlike our previous hike to the Plain of Six Glaciers Tea House, we hadn’t made plans to stop at the Lake Agnes Tea House, and that was probably for the best as it was quite crowded even at 9:00 a.m. We stopped briefly to have a snack that we packed, and then it was time to head for the Big Beehive. 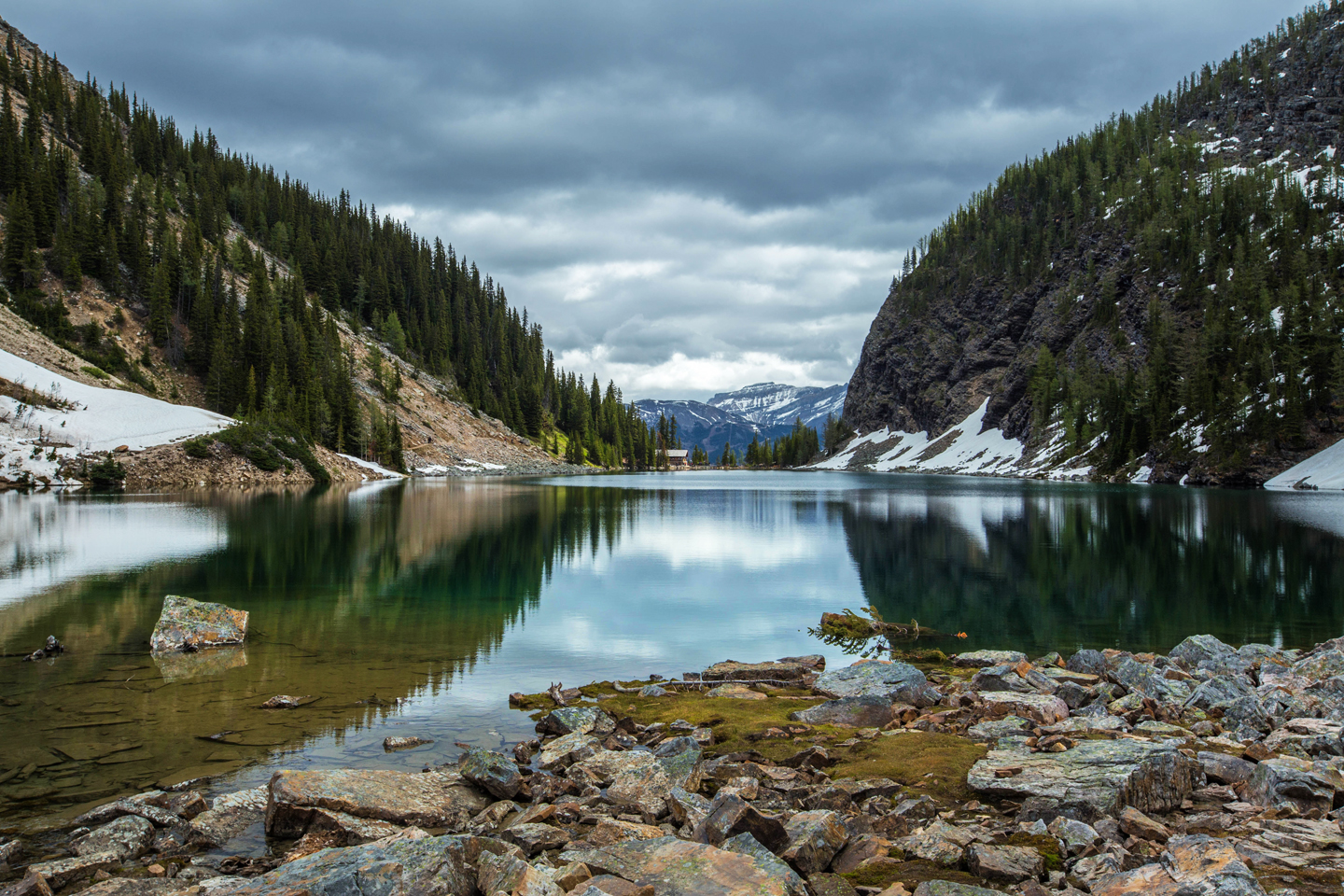 While most of the crowds stopped at the Lake Agnes Tea House, we continued along the lakeshore on the Big Beehive trail. It’s about a mile to reach the Big Beehive and once we passed the lake, we encountered some patches of lingering snow. 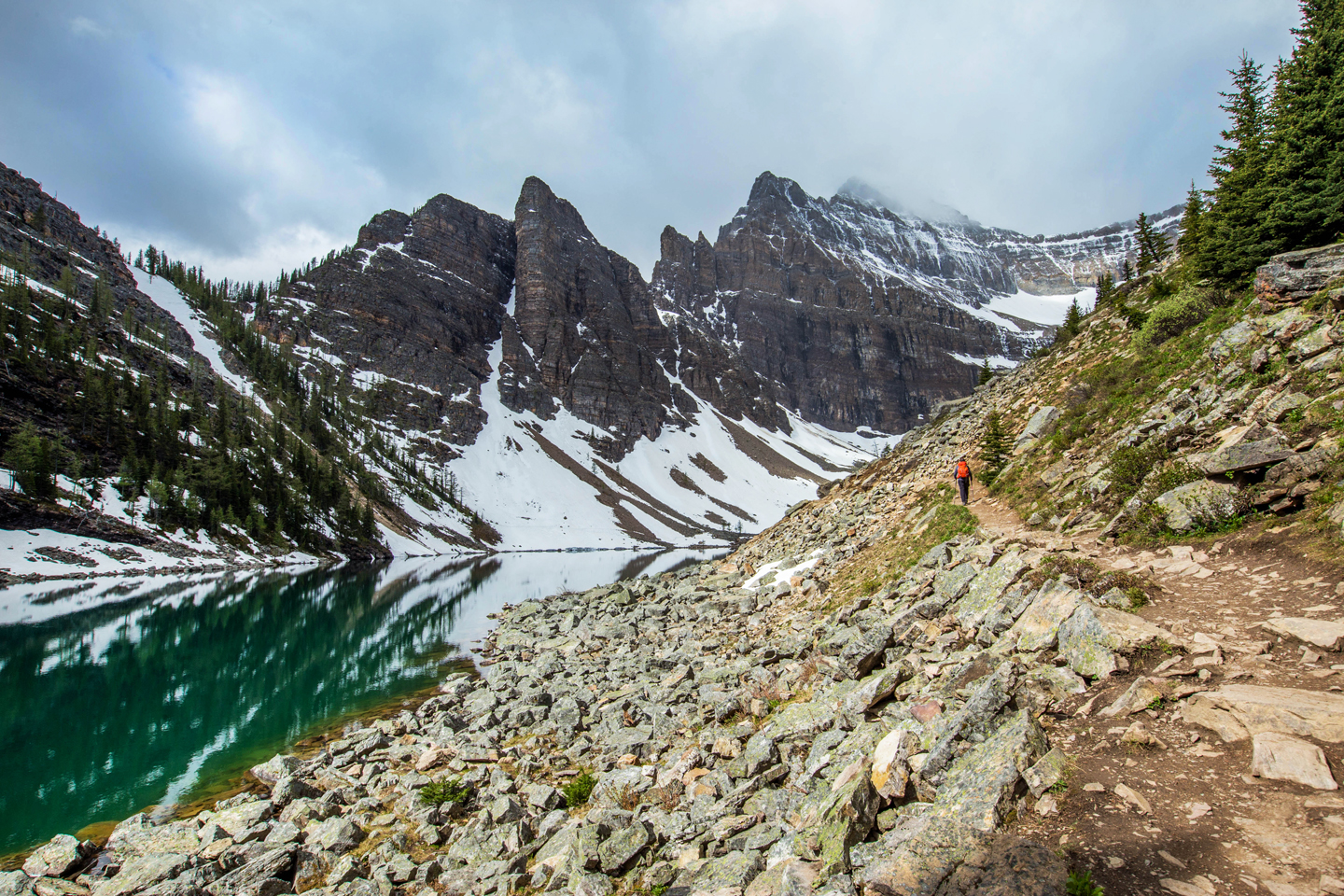 The trail switchbacks its way up, and the snow and loose rock made the conditions less than ideal, so we made sure to take it slow. 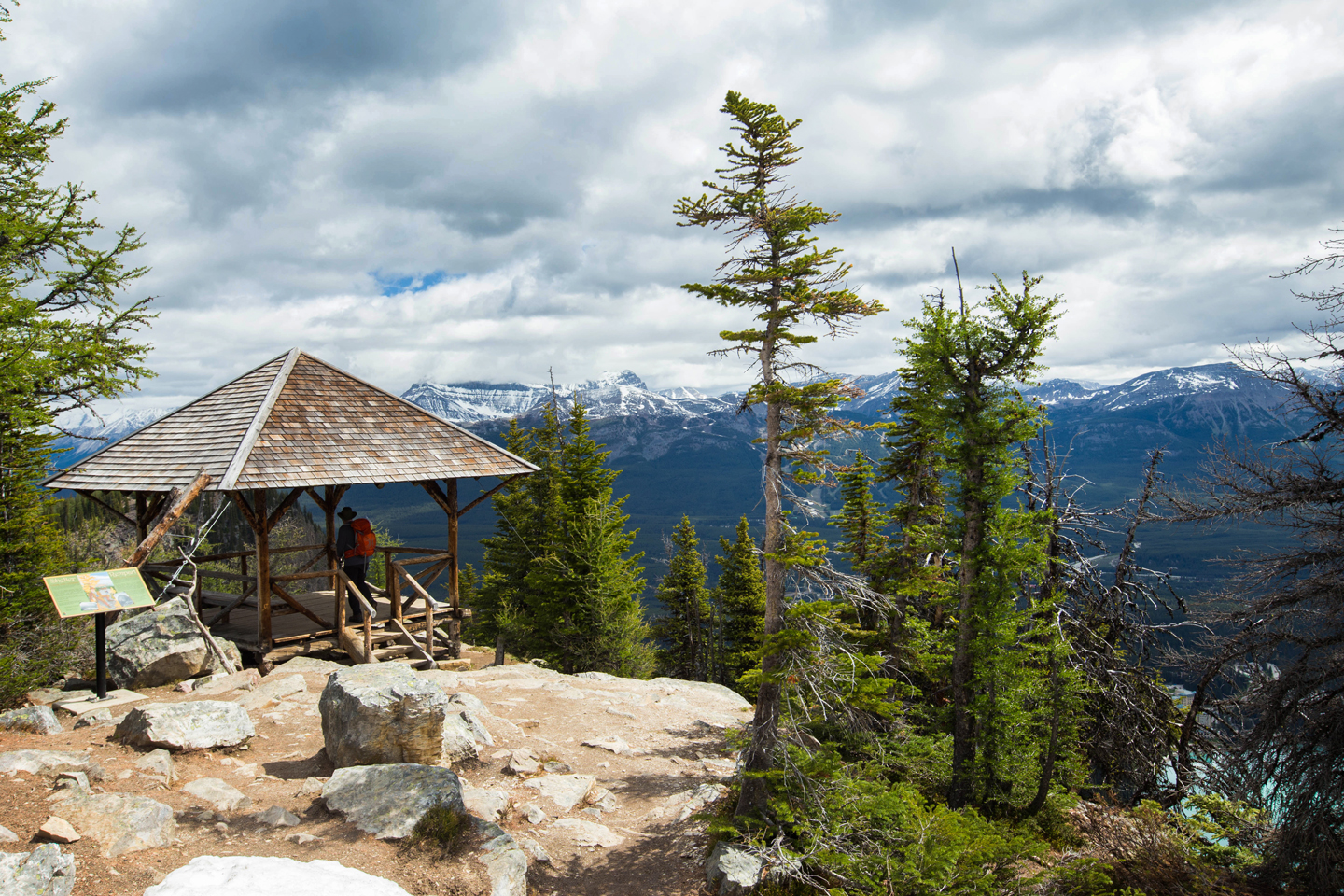 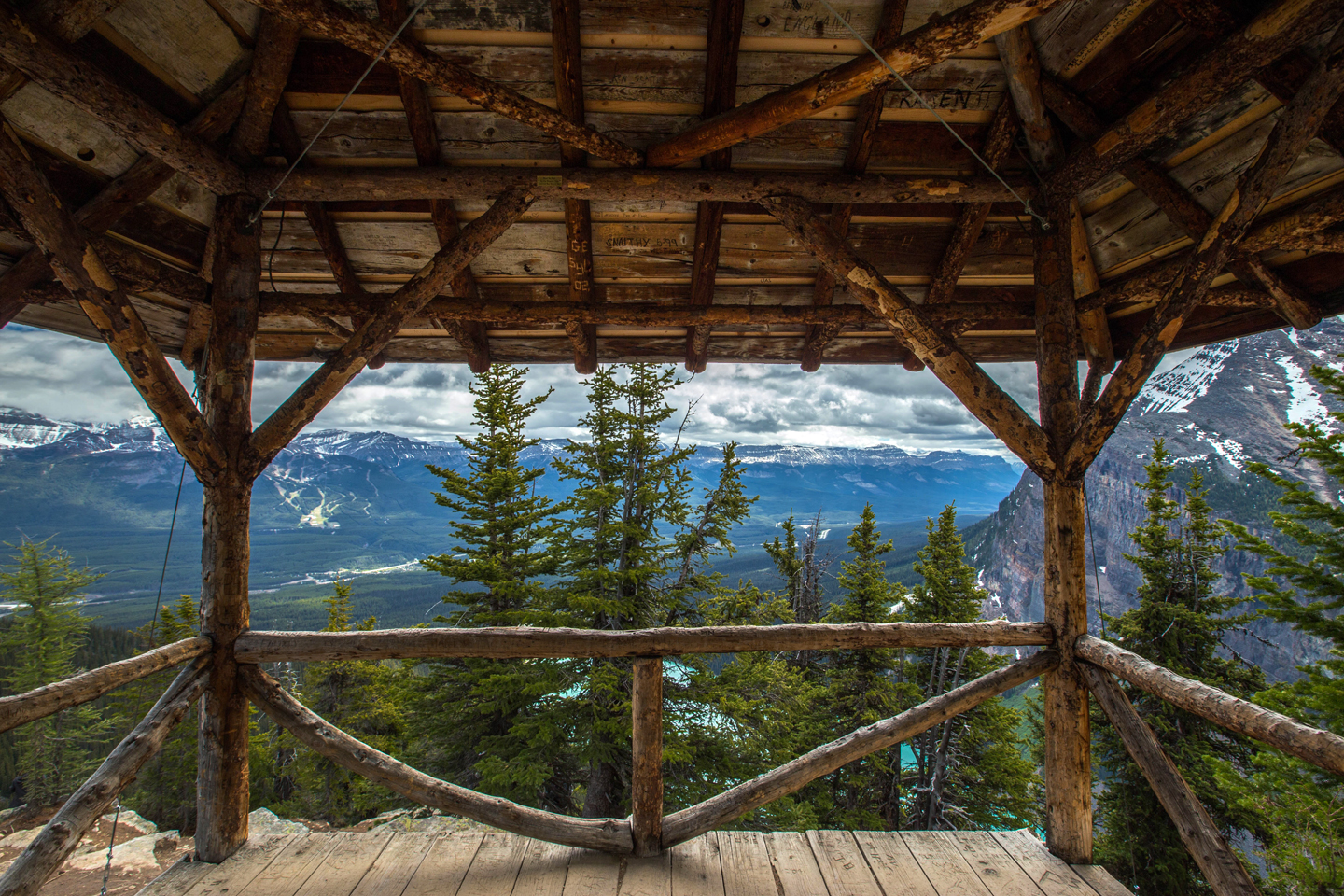 At the summit, there is a small shelter that was built by the Canadian Pacific Railway in 1916. Just past the shelter, there are some pretty incredible views to Lake Louise and Lake Agnes below. We took an extended break here for lunch, and enjoyed our sandwiches with a view. 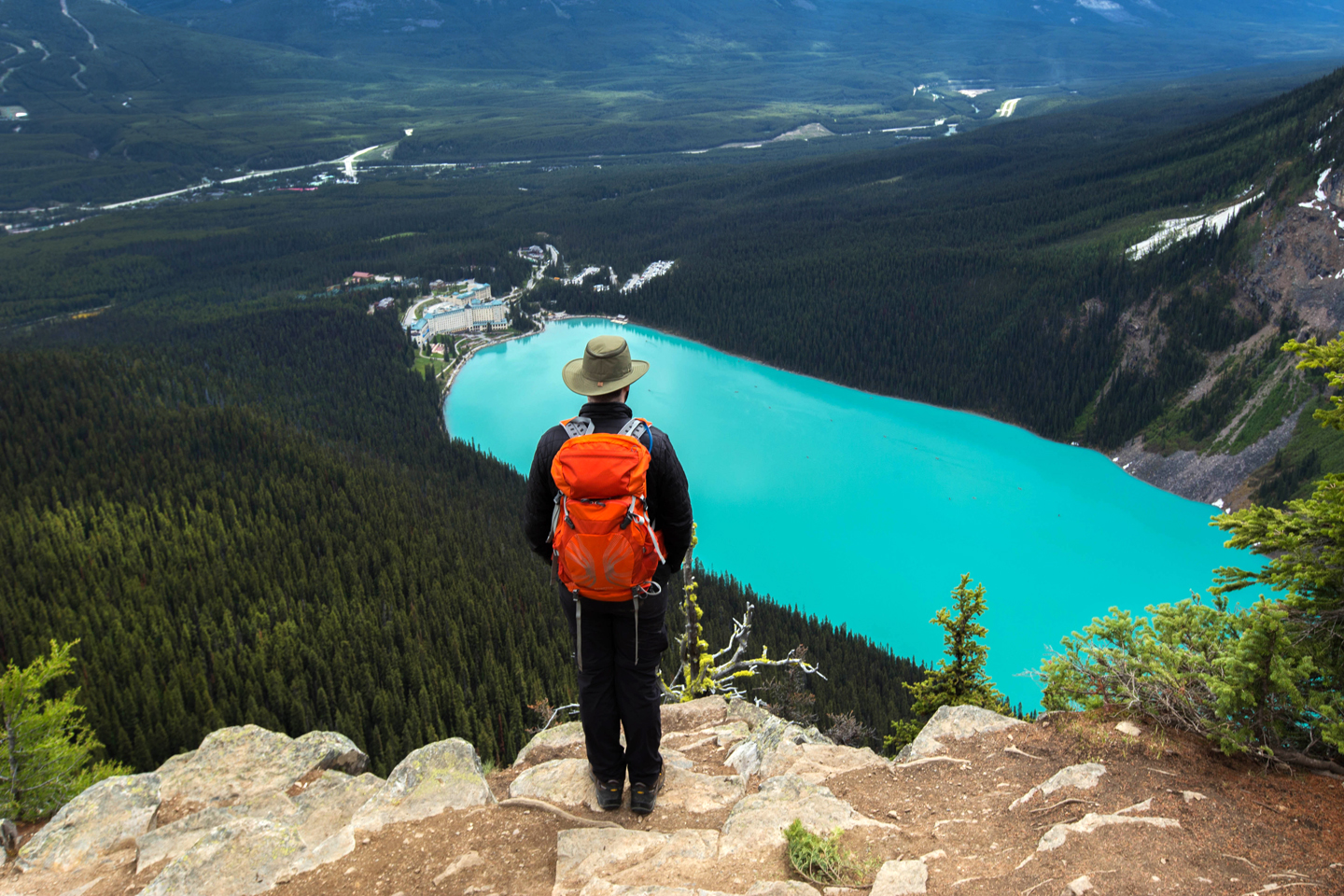 Nearly Hiking to the Devil’s Thumb

Although I’m admittedly not a fan of heights, I was eager to attempt to hike the Devil’s Thumb after we reached the Big Beehive. The first section of the trail was covered in thick snow and we followed previous tracks as best we could before you begin to ascend. After a bit of light climbing over some rocks, the trail continues around the back of the mountain on a narrow single track. 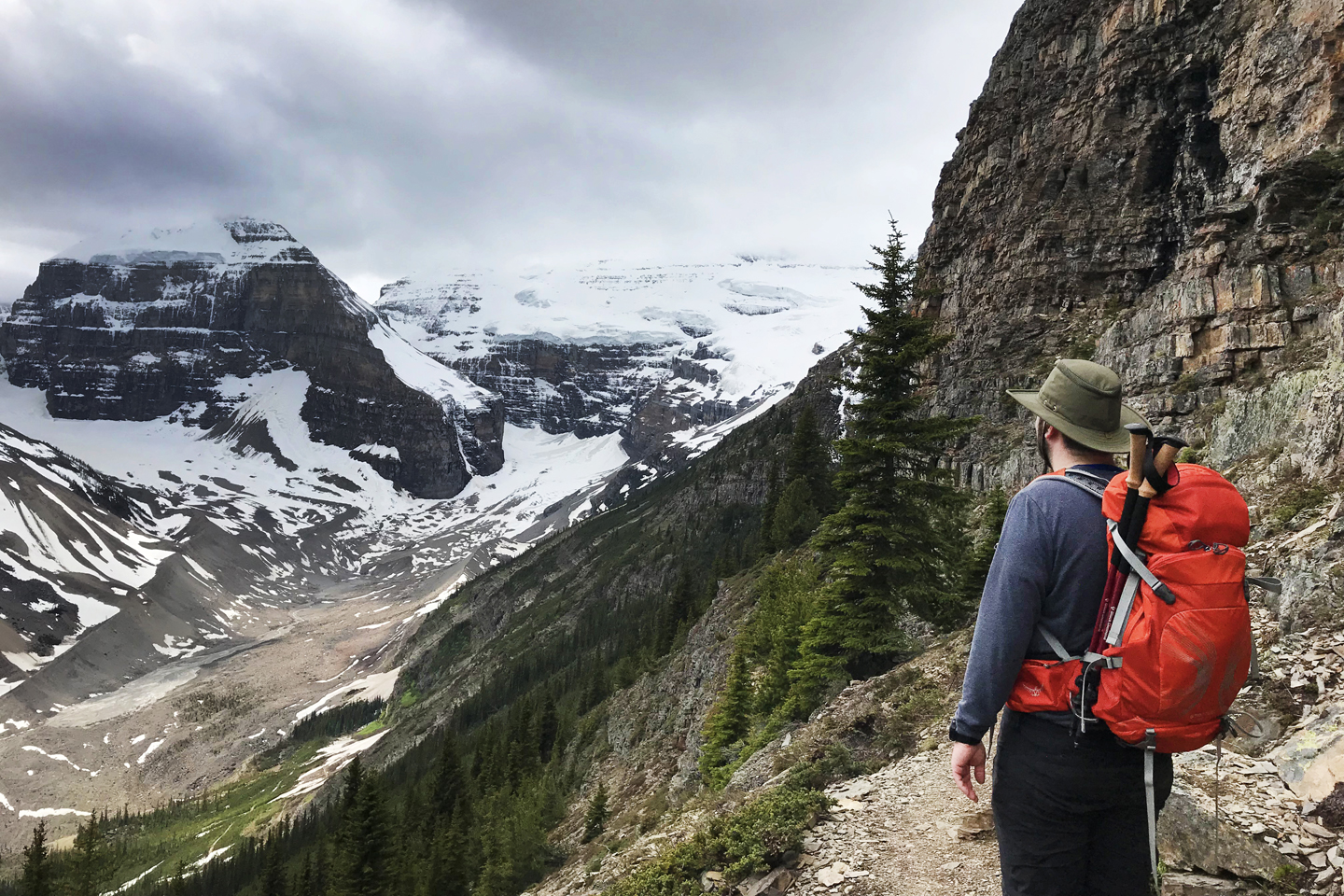 There were definitely a few places with loose rock and snow on trail, making the trek a bit nerve-wracking, but the scenery was also beautiful, so we pushed on. We told ourselves we would see how things went and if we ever felt uncomfortable, we would turn back. After running into two girls descending from the summit who said it wasn’t too bad and worthwhile, we felt inspired to continue on. 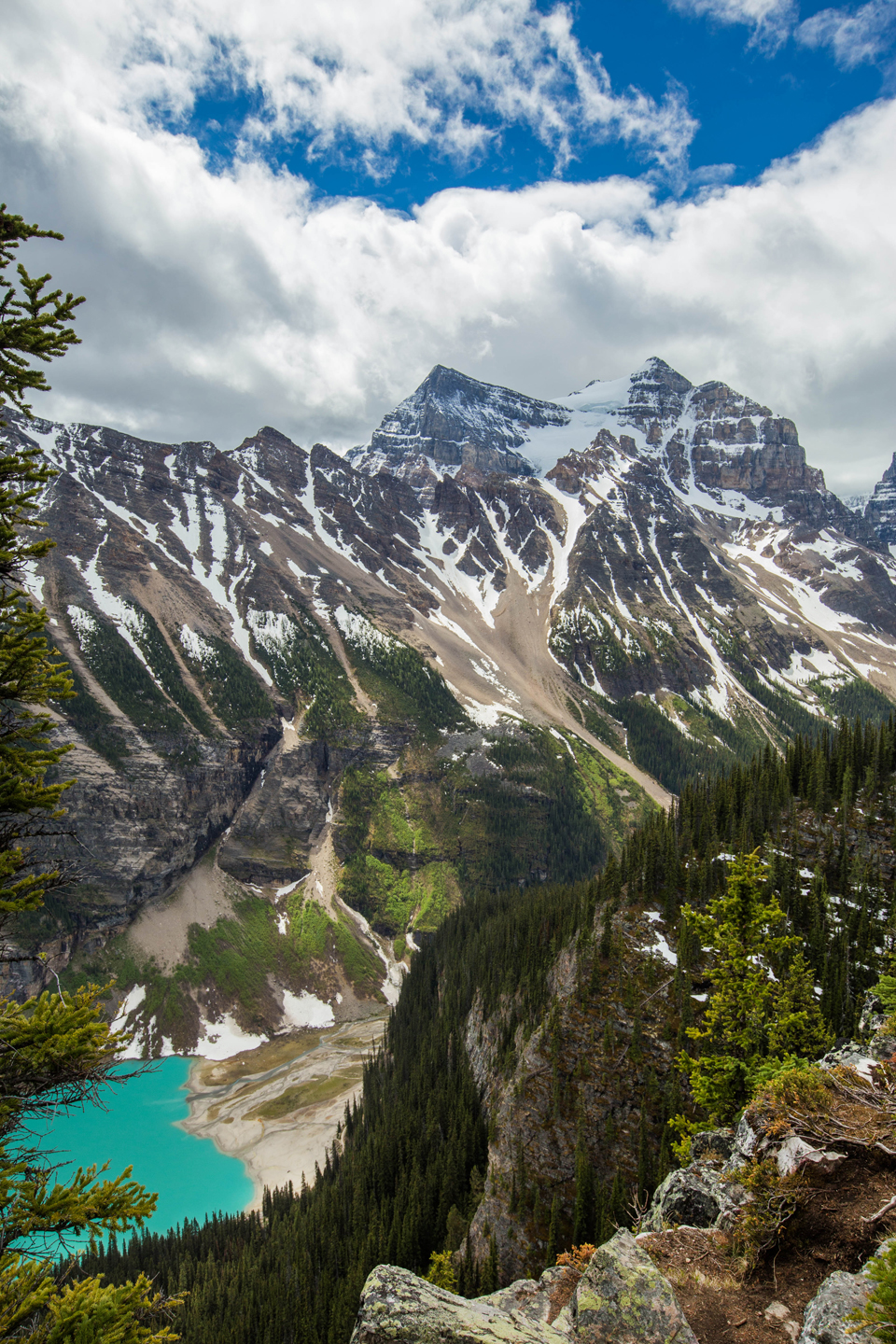 The last stretch of the hike climbs over loose rock and scree to reach the summit of Devil’s Thumb. A hiker was coming down on our left, and we watched as he stepped cautiously over the scree. He advised us to follow his path as it was easier than trying to head up the loosely defined center path. 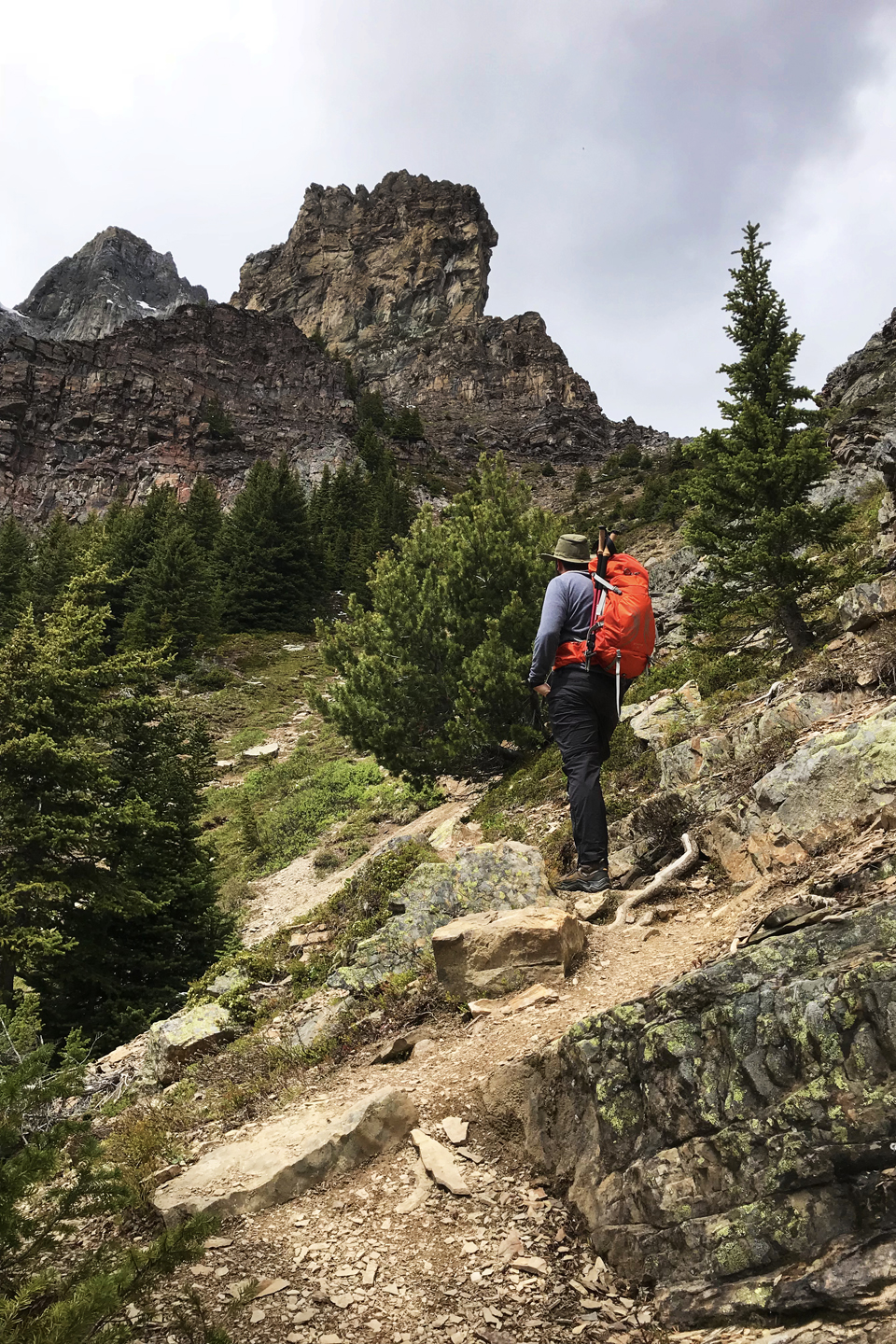 I started first, but the trail was slippery and our balance was not confident. We saw others descending a different route in the center of the path and mostly just sliding down. After heading about a quarter of the way up with less than sure traction, we made the tough decision to turn back. As much as we would have loved to make it to the summit, we felt it was better to be safe and not take an unnecessary risk. 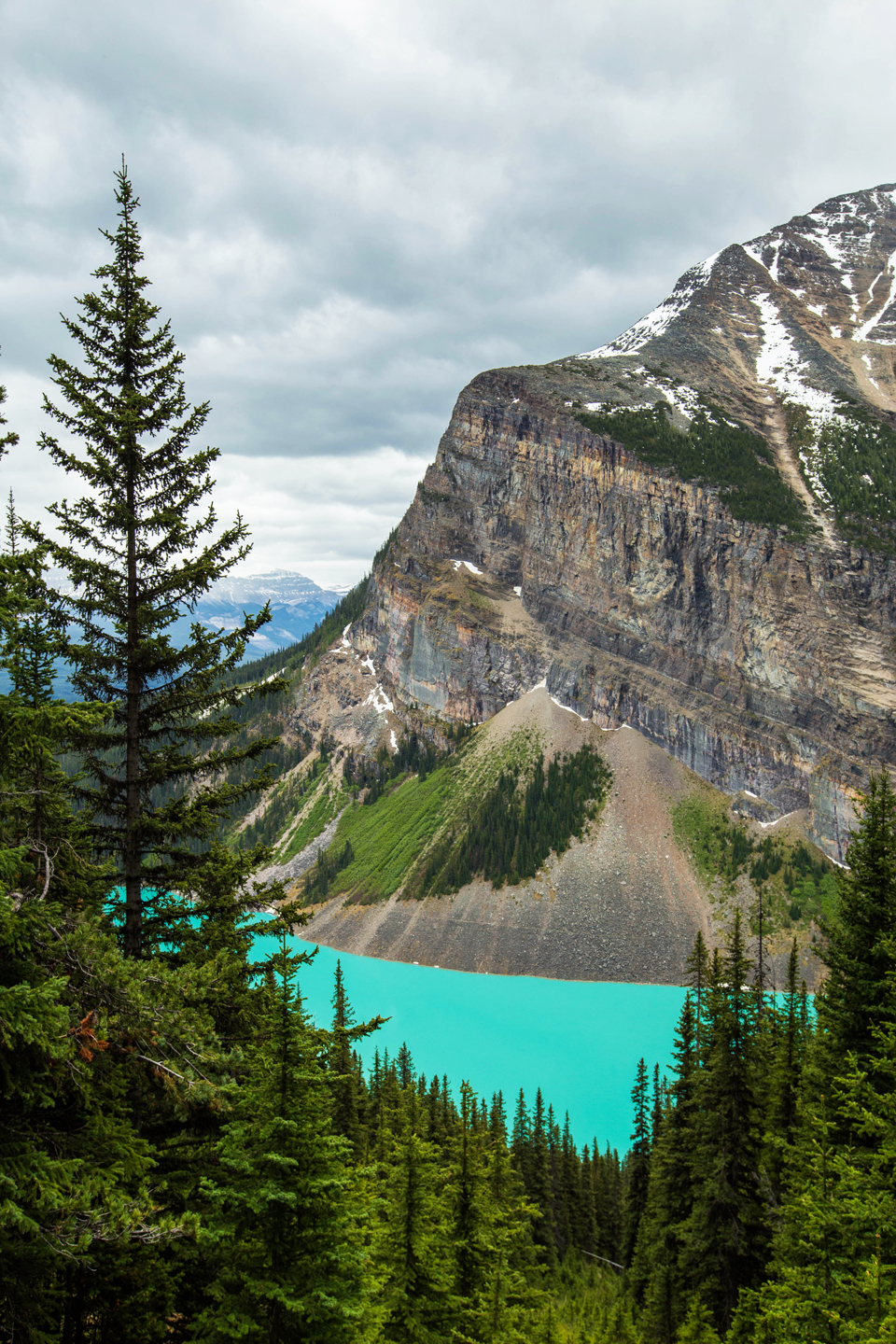 After our side trip attempt at hiking to the Devil’s Thumb, we were eager to get back to the car. Wanting to avoid some of the snow and crummy conditions the way we had come up, we decided to go back down the High Line Trail and connect with the Plain of Six Glaciers Trail. We had overheard from other hikes and remembered reading that the trail was supposed to be more thawed out we hoped an easier descent. In the end, although the trail was easier, it was also longer and we were more than happy to be back at Lake Louise and the car. 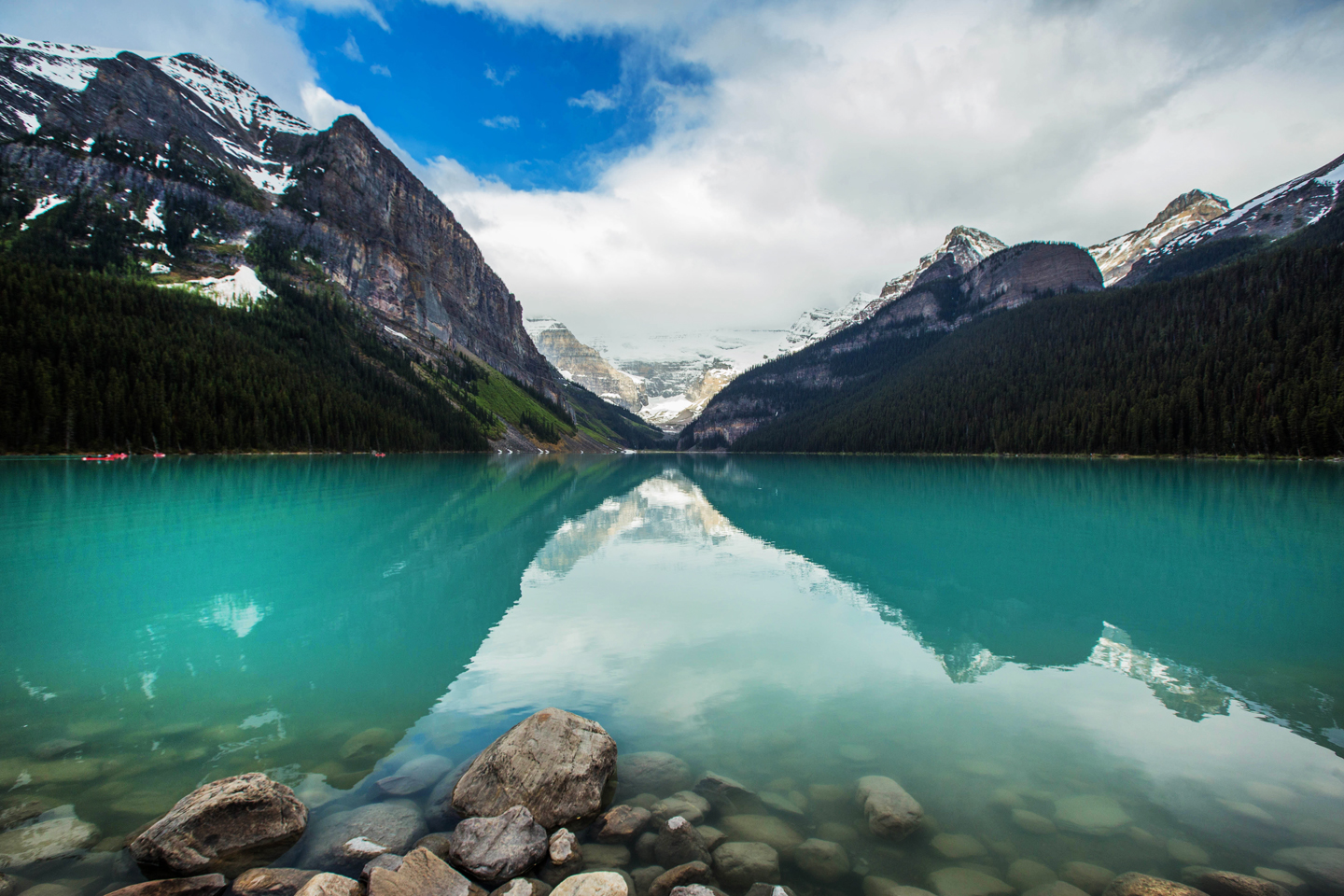 Have you completed the Lake Agnes and Big Beehive Hike? Let us know in the comments!

Hiking the Plain of Six Glaciers

Hiking to Moraine and Consollation Lakes 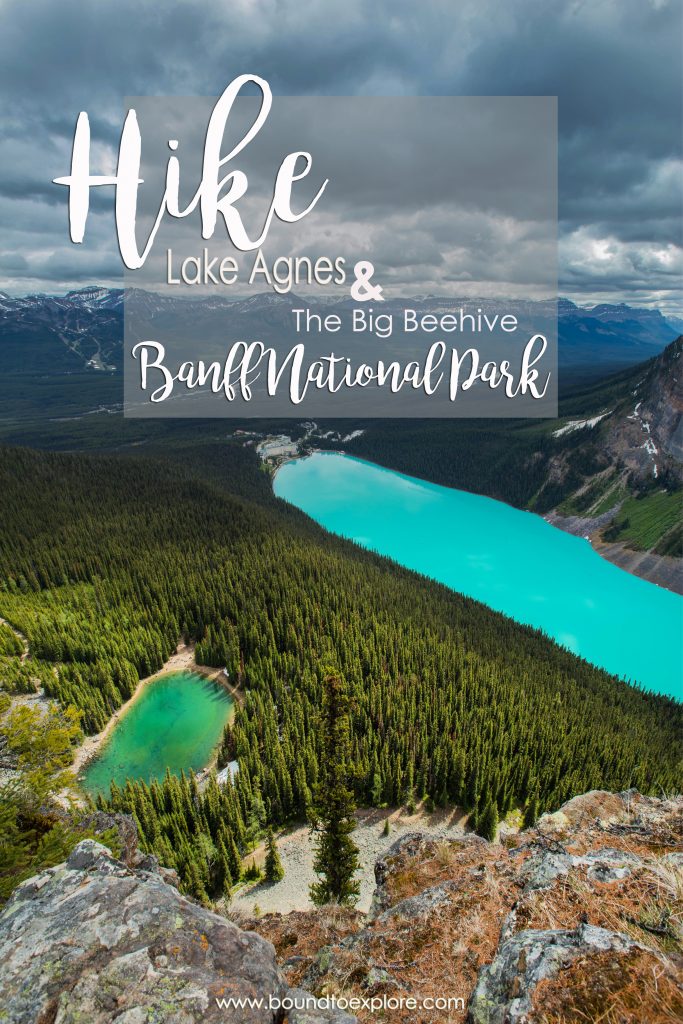