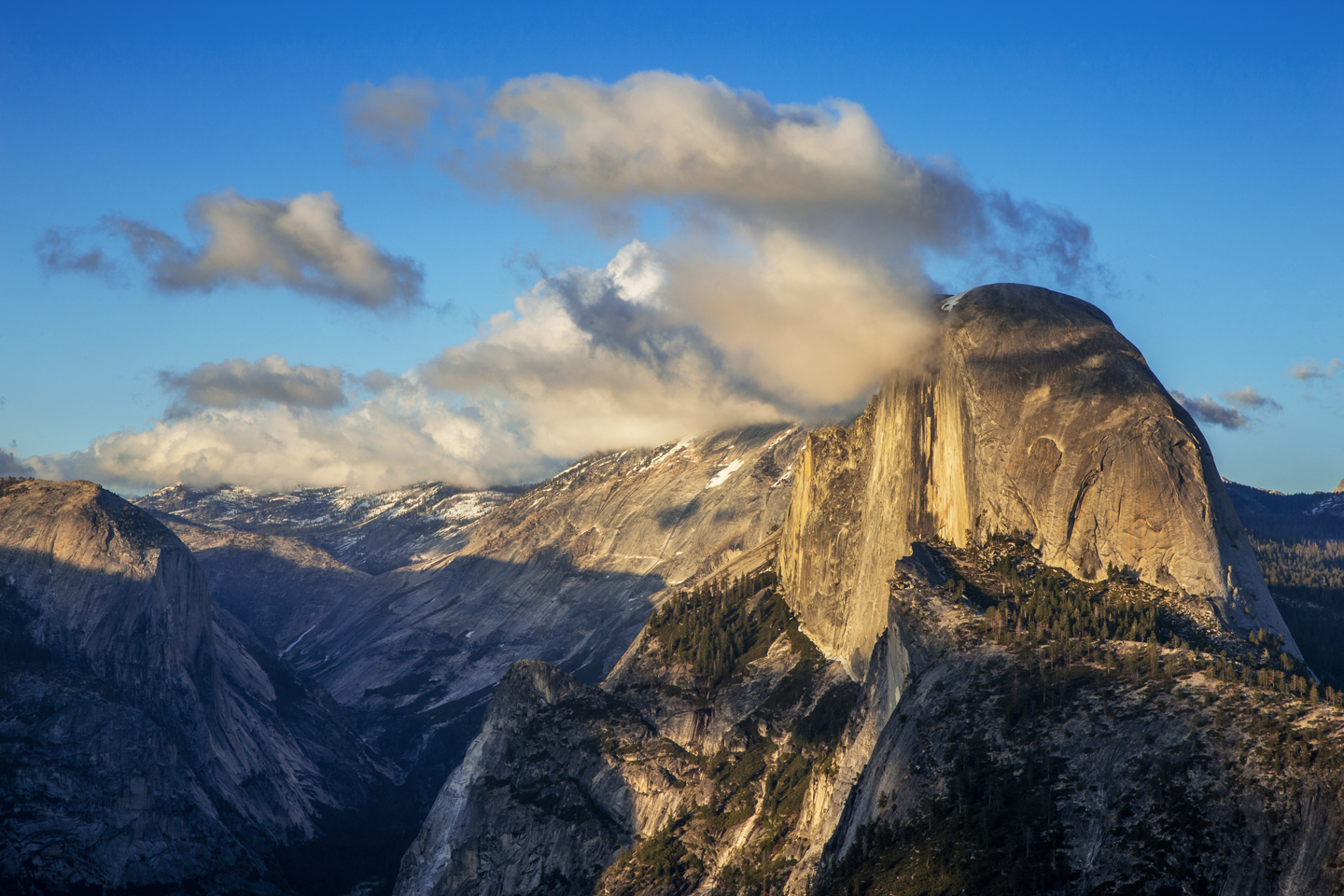 Working full-time jobs means we live for the weekend, and more importantly, our weekend adventures.

In the little over one year that we have lived in Northern California, we have made every effort to get out and explore our new surroundings. Often, this means extensive time in the car as we travel to different outdoor destinations where we can stretch our legs with a good hike.

With summer just around the corner, Julie and I have started to ramp up our training regime in preparation for making the leap from day-hikes to backpacking.

On Friday evening, we started to throw around the idea of going to Yosemite as a day-trip for the opening day of the road to Glacier Point. After a few minutes of discussion, we made the plan official, and began prepping for an early morning trip to Yosemite. 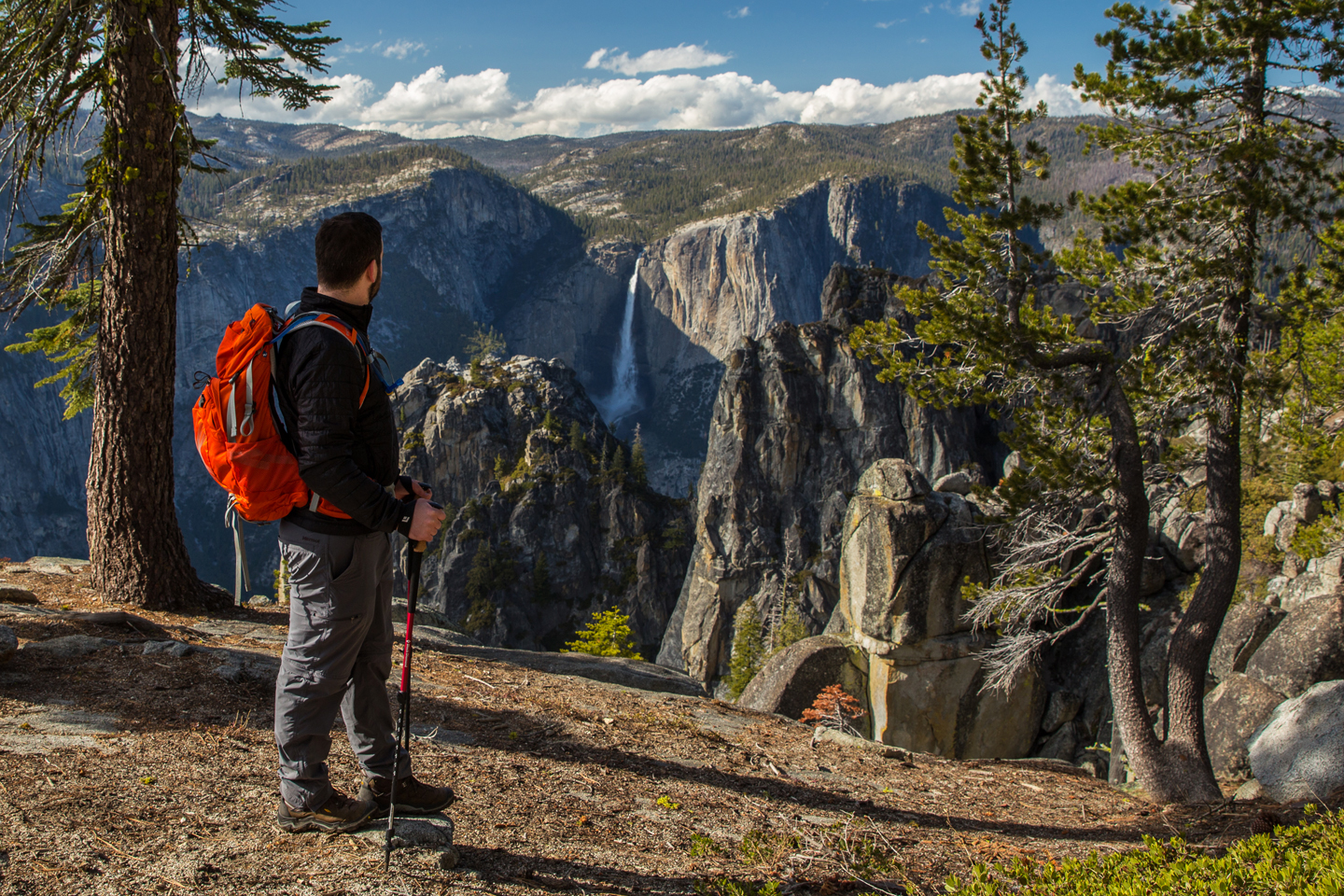 Friday night,  we set our alarms for 5:00 a.m., but we rudely awakened an hour earlier thanks to the smell of skunk wafting into our apartment. One of the bigger problems we have experienced in our short time living near the Santa Cruz Mountains, and a creek, is the abundance of skunks, particularly when the temperatures warm up. Undeterred, we decided to forgo the additional hour of sleep and start getting ourselves ready to go. By 5:30 a.m. the car was packed and we are on the ready, headed for Yosemite.

On the flip side, one of the best things about living in the South Bay is that we are just 3.5 hours from Yosemite Valley, and about an extra hour from Glacier Point. This makes the idea of doing a day-trip, much more palatable than when we lived in SoCal and the drive was 6.5 hours.

After a brief stop for gas, we arrived to Glacier Point at 10:00 a.m. and as expected, the parking lot was busy. As a general rule, we try to stick to our philosophy of arriving to popular destinations prior to 9:00 a.m. and so we knew we were in for a busy day. Despite the traffic jam at the entrance to the parking lot, there were plenty of spots. We quickly parked, threw on our backpacks, and walked over to enjoy the views. 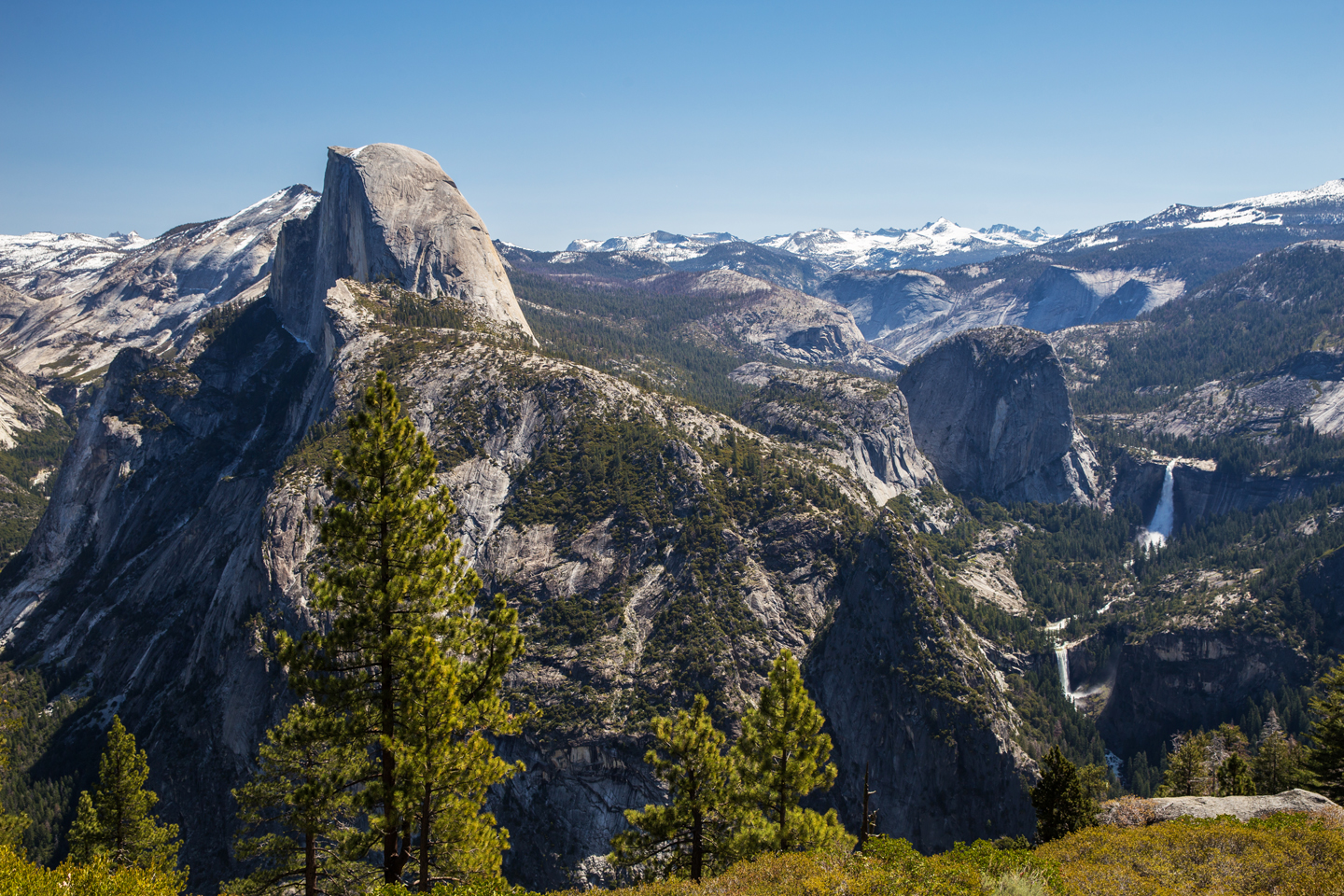 In January 2014, Julie and I embarked on our first trip to Yosemite, and my first visit overall. We started off planing to hike to Vernal and Nevada Falls before deciding on a whim, to hike the entire Panorama Trail through Glacier Point and down the Four Mile Trail. We arrived at Glacier Point just as the sun was beginning to set, taking in the majestic beauty of Half Dome and it’s surroundings, before heading back to the valley in the dark. The experience was one we will never forget as we sat, completely alone, both excited for what we had accomplished and nervous about the remaining journey ahead of us.

Four years later we found ourselves at the same viewpoint, but this time we were far from alone as hundreds of tourists and fellow hikers flocked to the freshly opened destination. After exploring the different vantage points of Half Dome, we were ready to move away from the crowds and begin our hike for the day. 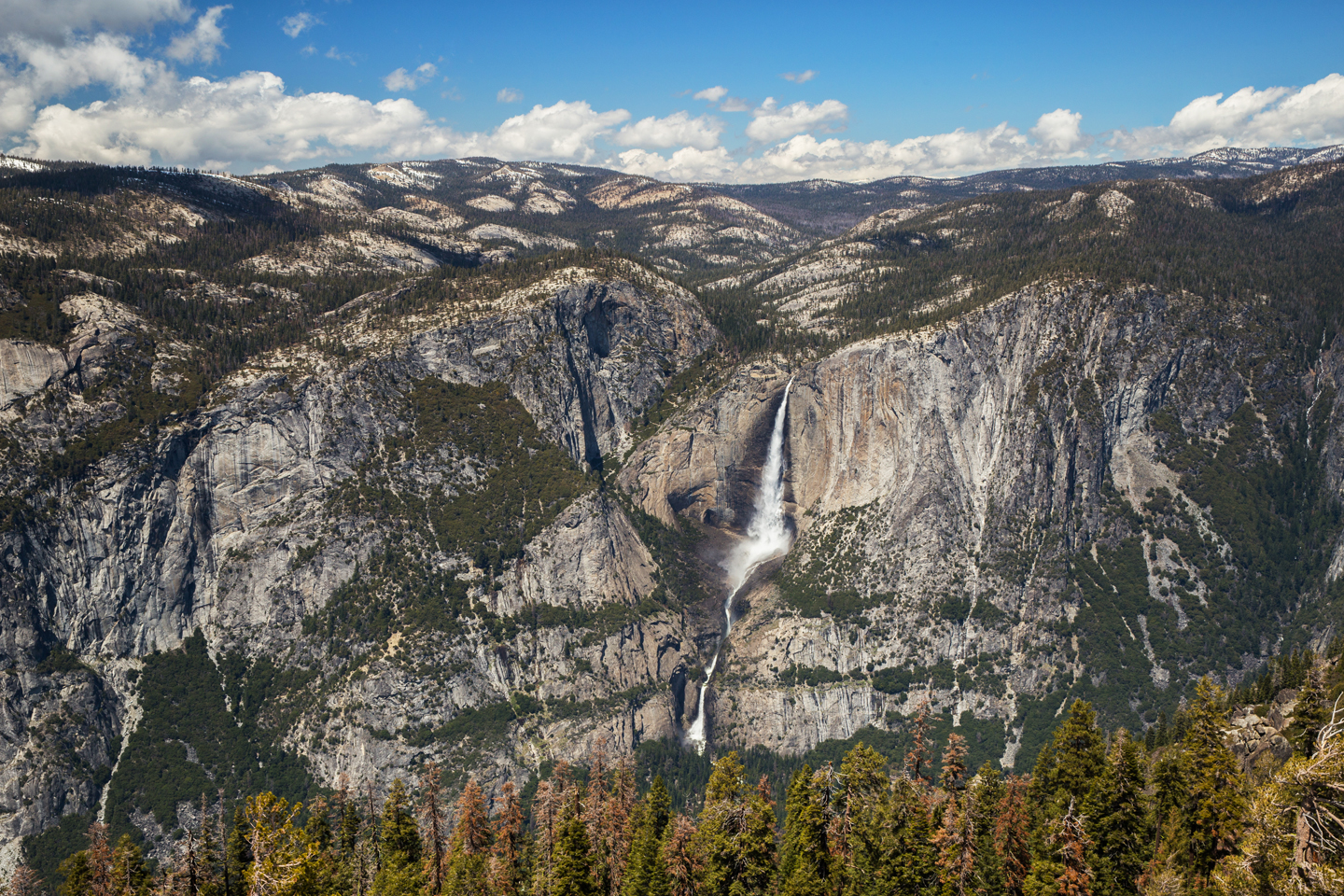 The 1.5 mile trail to Sentinel Dome begins on the opposite side of the viewpoints for Half Dome, when starting from Glacier Point. There is an additional parking area for a shorter route to Sentinel Dome, but we wanted to get a few extra miles in for training. In the beginning their is a slight incline, but for the most part the trail is pretty easy going. We hiked through the trees for the first mile before the trail opened up and we once again were greeted by views of Half Dome. Continuing on for the next half mile, we made it to Sentinel Dome rather quickly. There was a patch of snow covering the last 100 feet or so to the top of Sentinel Dome, so we used caution and our new trekking poles for traction. 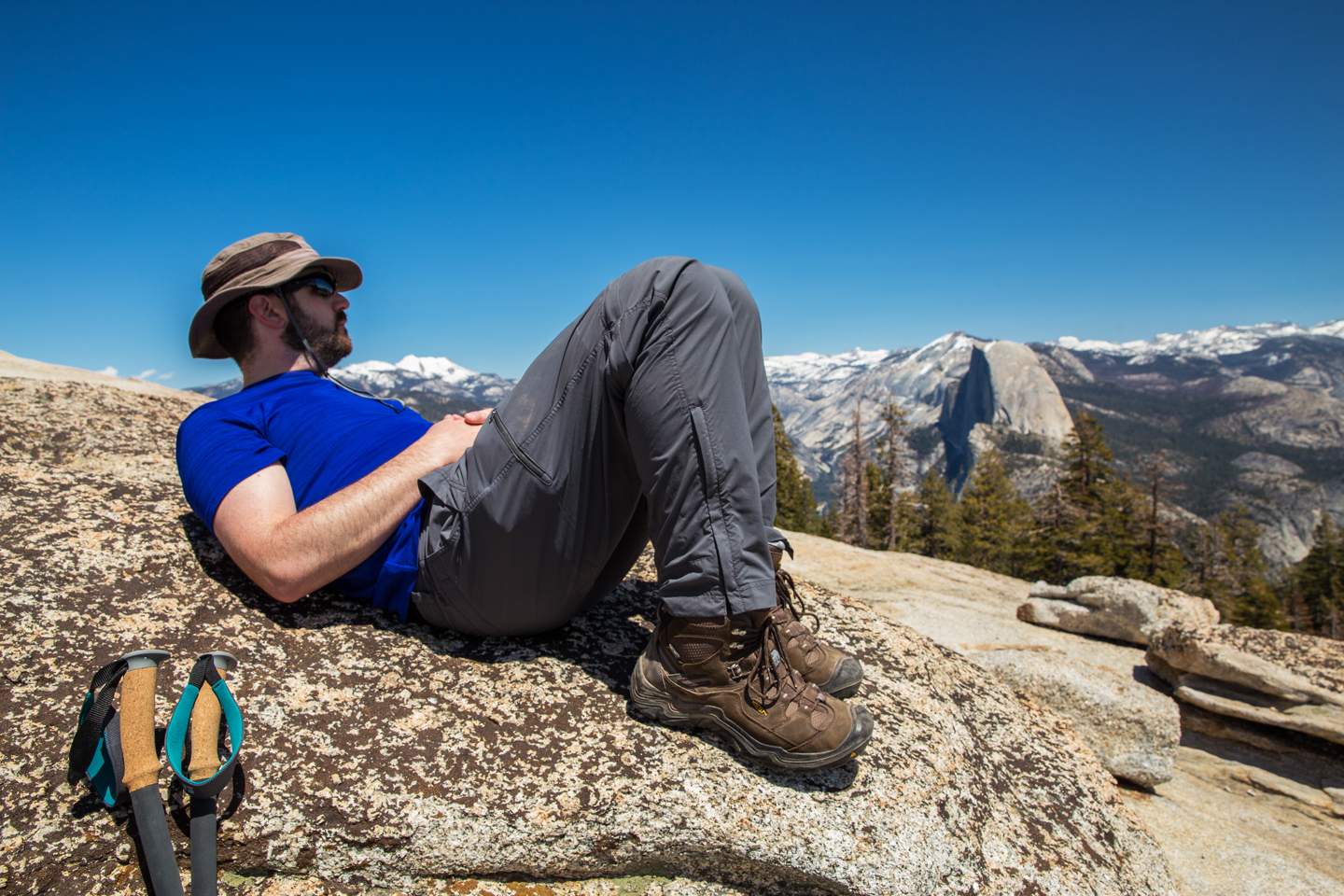 At the top, we were greeted to some fantastic, 365 degree views of Yosemite Valley. After hiking to the top of Yosemite Falls just two short months ago, it was nice to be able to look across to where we had previously hiked. From the top of Sentinel Dome, we could make out the switchbacks that lead up the west side of the falls, and Yosemite Point. With so much room to spread out at the top, we took this opportunity to enjoy our lunch with a view, and we were able to find a spot away from the crowds. 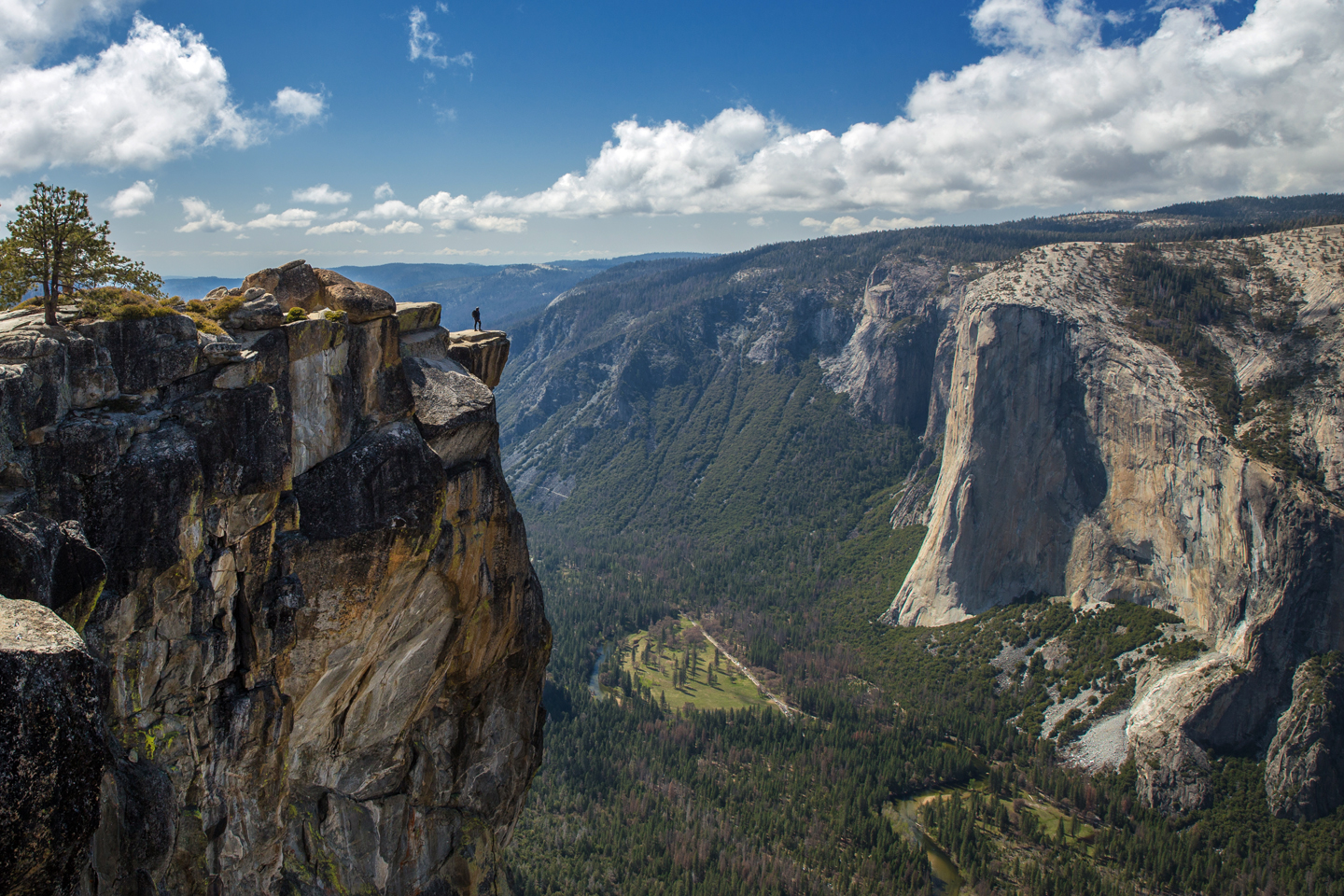 From Sentinel Dome, the shortest route to Taft Point is 2.1 miles and passes by the parking lot at the trailhead. Because we wanted to extend our mileage for the day, we opted to head in this direction and then loop back around the longer way on our return to Glacier Point. The trail to the Sentinel Dome/Taft Point parking lot was easy, fast, and also quite crowded. Julie and I remarked at the number of hikers we witnessed not carrying any water. Even on the easiest hikes, we always make sure to carry more water than we think we might need. 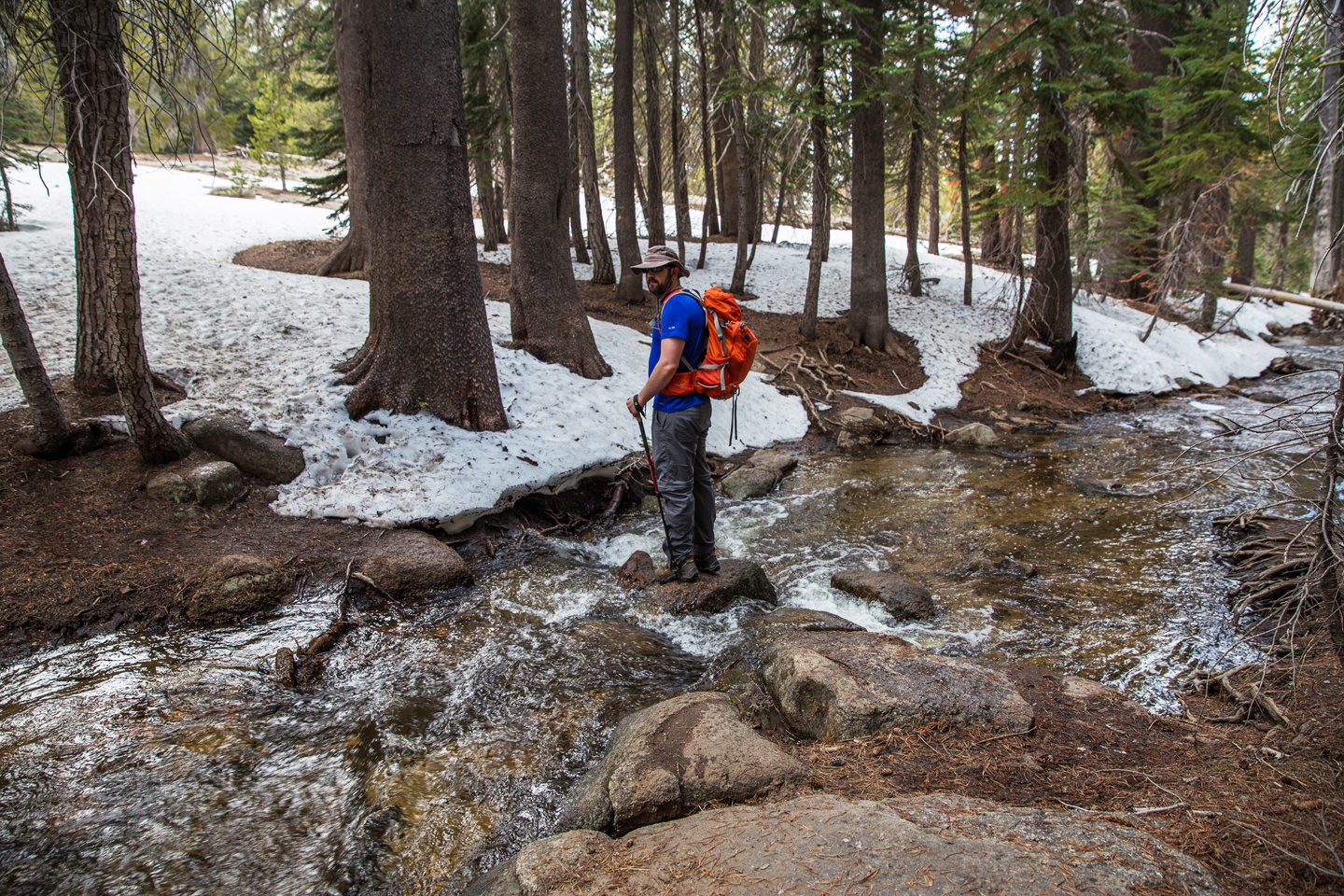 Past the parking lot, the trail to Taft Point became a bit sludgy as the winter snow had left the ground muddy in many places. We crossed a small stream and then continued on our way to Taft Point, being cautious not to lose the trail. Much as they were at Sentinel Dome, the views from Taft Point were incredible. As someone who is afraid of heights, there were plenty of ledges to walk out on with sheer drop offs below, and I made sure to keep my distance from the edge. 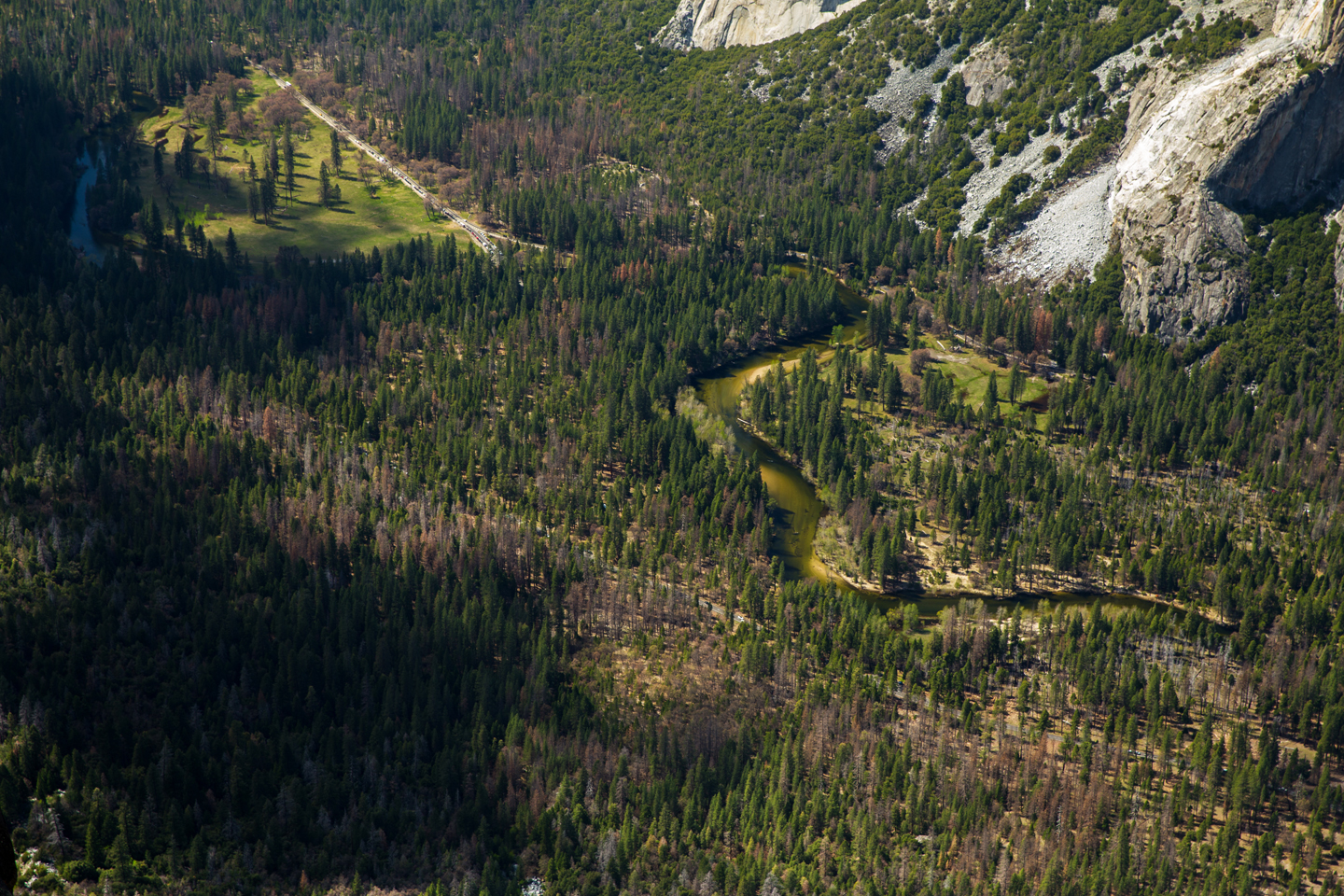 A popular vantage point for photos is to stand along the ledge with a guardrail while another person stands on what can best be described as a rock version of the pirate ship plank. If you’re standing on the point, you have the appearance of being on top of the world. As one can imagine, there were no shortage of photo seekers looking for the perfect shot in that location, so Julie and I impatiently waited for our turn, while taking in the views. 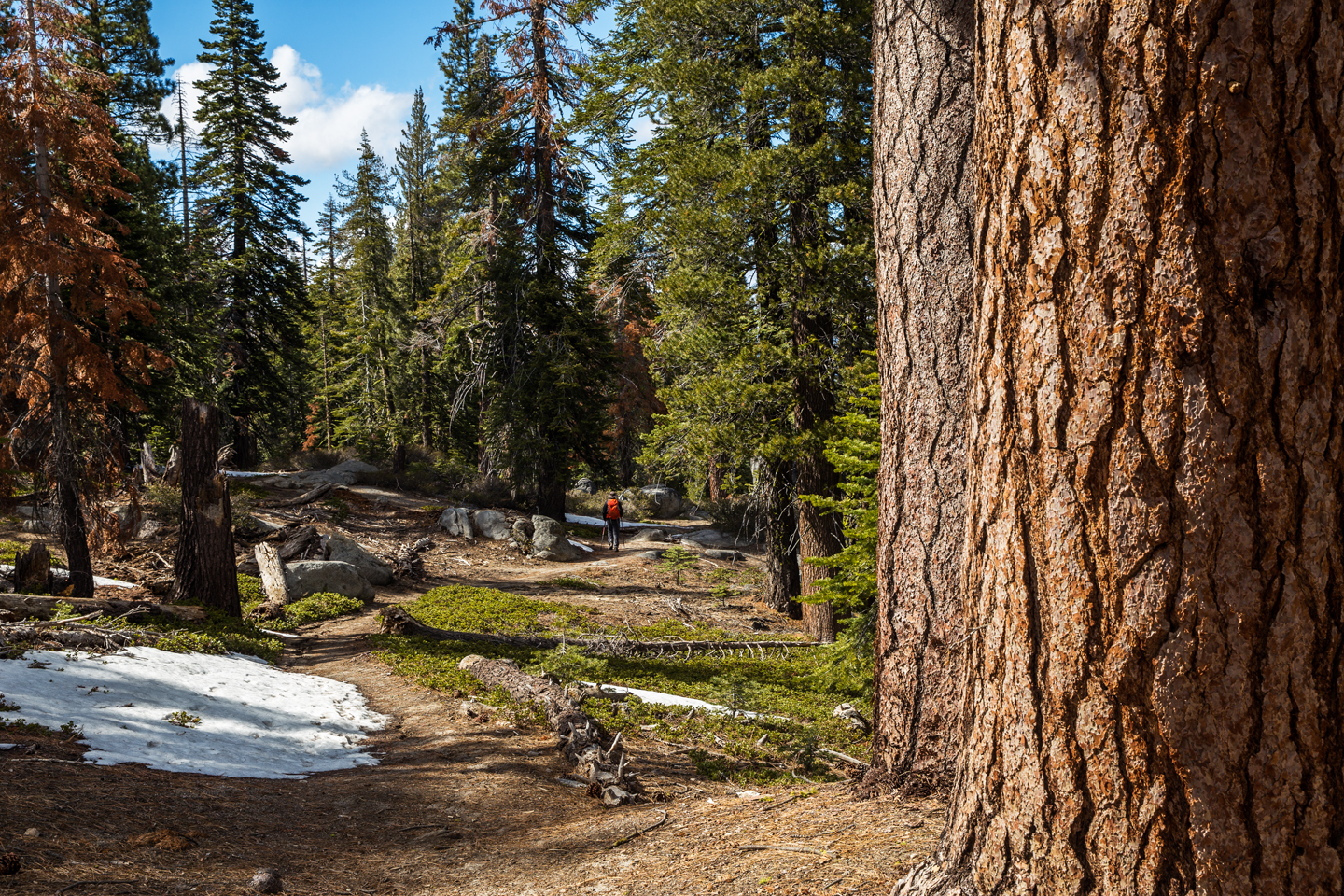 Having had our fill of Taft Point, we began making our way back to Glacier Point, this time opting for the longer way. Almost immediately, we realized that we had taken the right path as the crowds disappeared and we had the trail to ourselves. The first half mile of the trail had a good amount of snow and made the hike slow-going. We were then greeted by patches of open dirt trail followed by more snow. 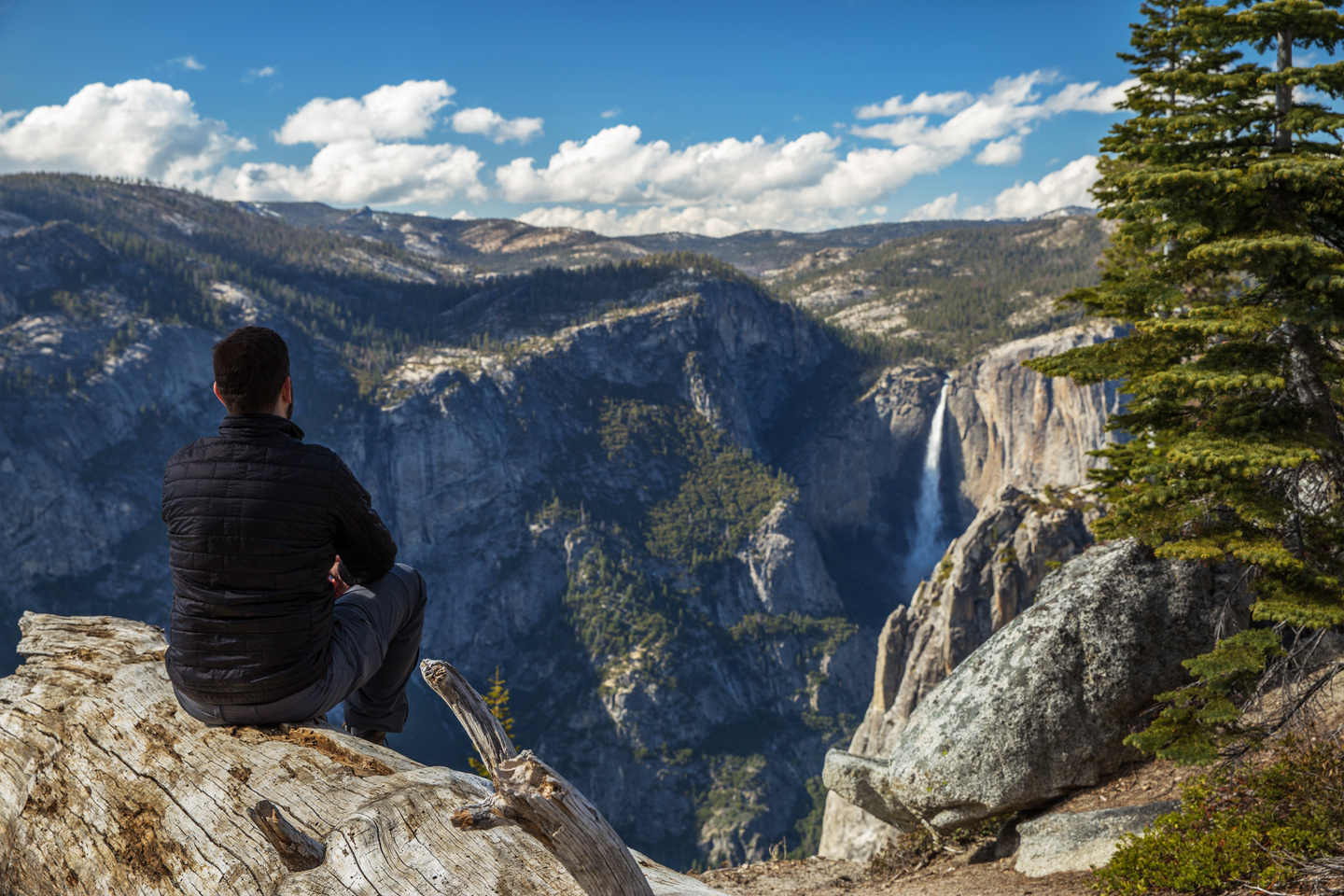 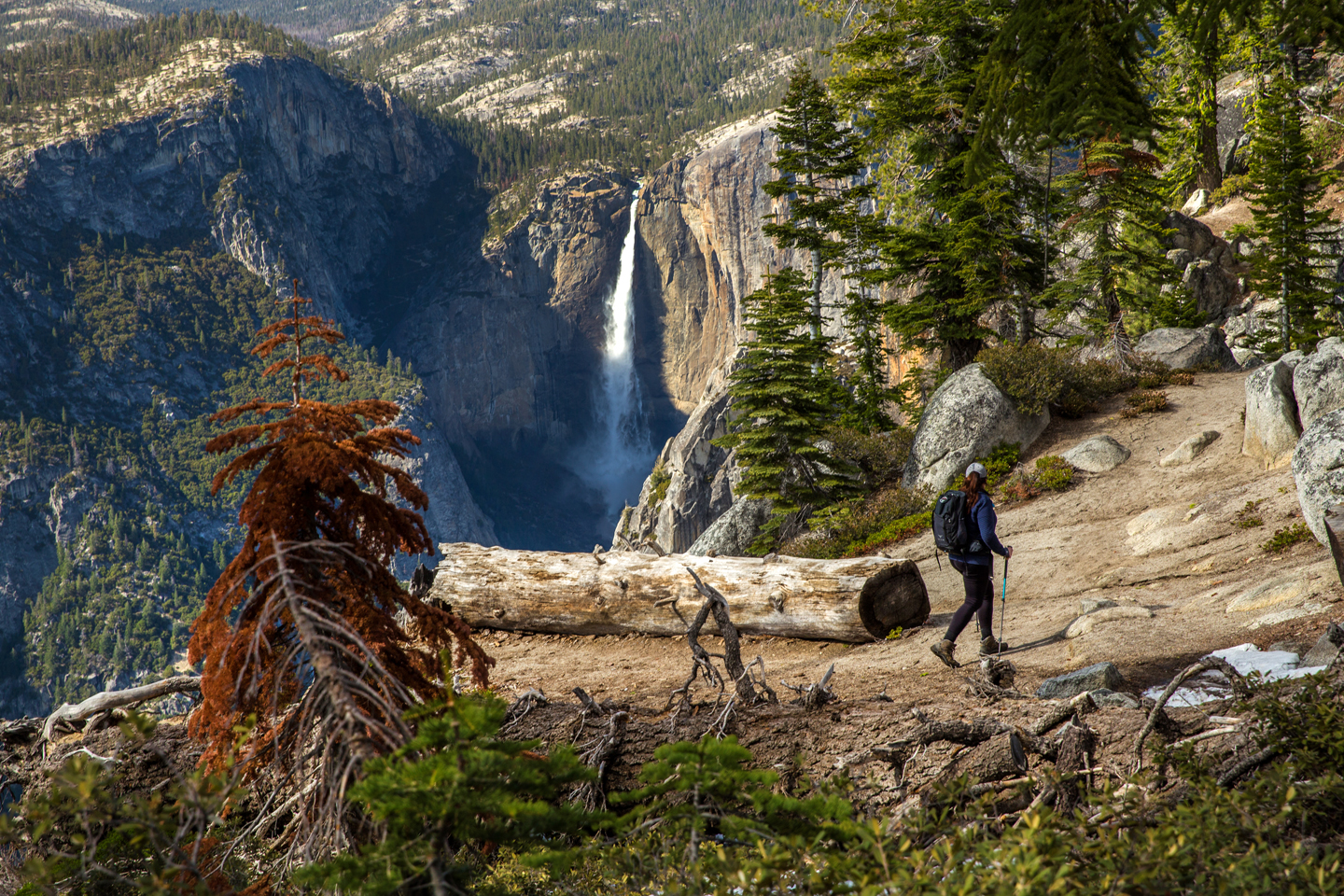 Continuing along, the trail opens to incredible viewpoints of Yosemite Falls in the distance. We sat on a log with a perfect vantage point and gazed across the valley at the thundering falls. From there, the hike begins to switchback up out of the mossy forest, and then connects back to the Sentinel Dome trail-head we started on earlier that day. 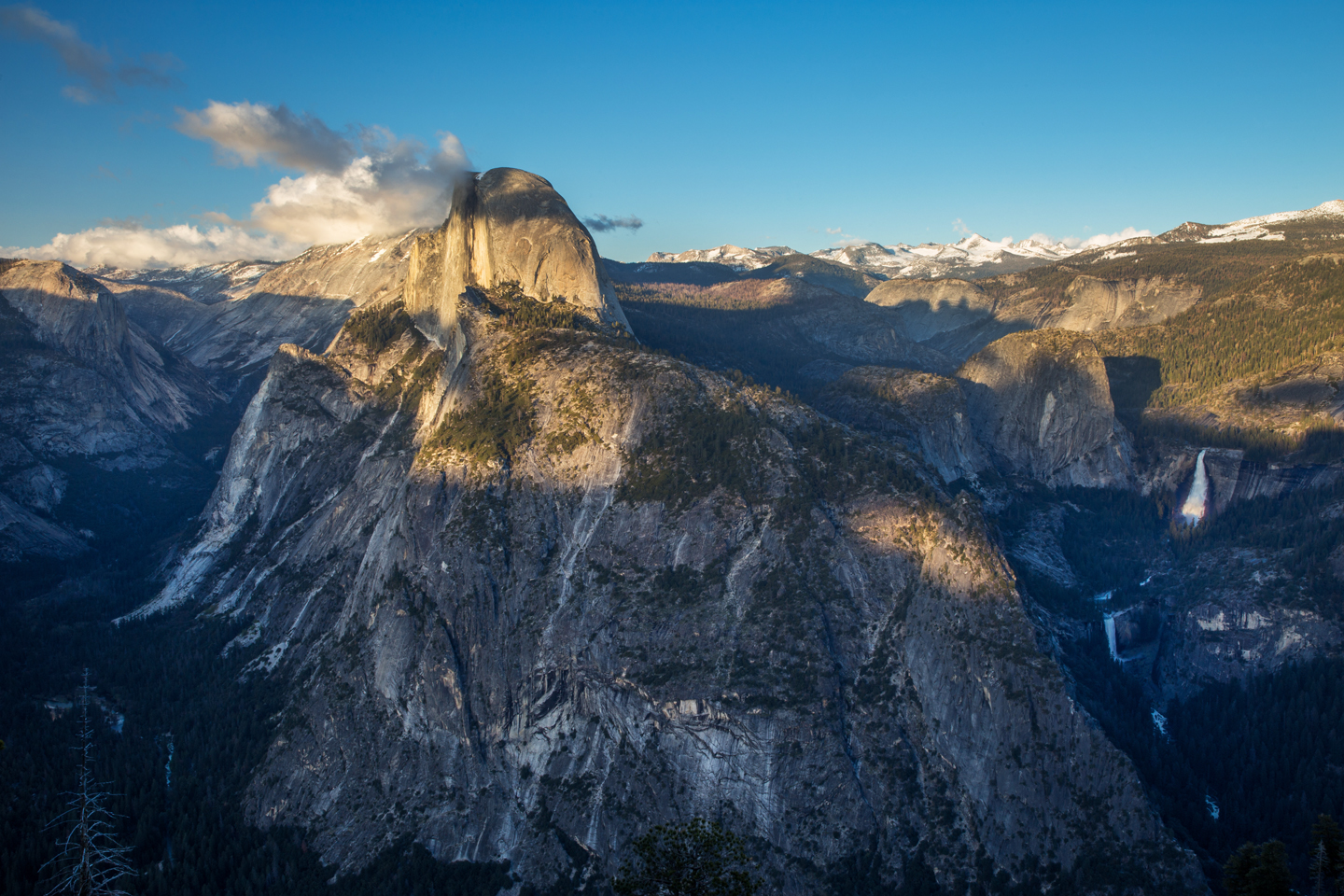 Back at the parking lot, we unloaded our gear and changed into clean shirts and sweatshirts, while filling up on beef jerky and Cheez-Its. Since it was only 6:15 p.m, we still had another hour and a half to wait for sunset. We used this time to walk around Glacier Point and scout for good shooting locations for Julie. While there were some clouds in the sky, the colors never fully materialized for a full on show. Nevertheless, it’s hard to be disappointed when the backdrop of Half Dome is so incredible. 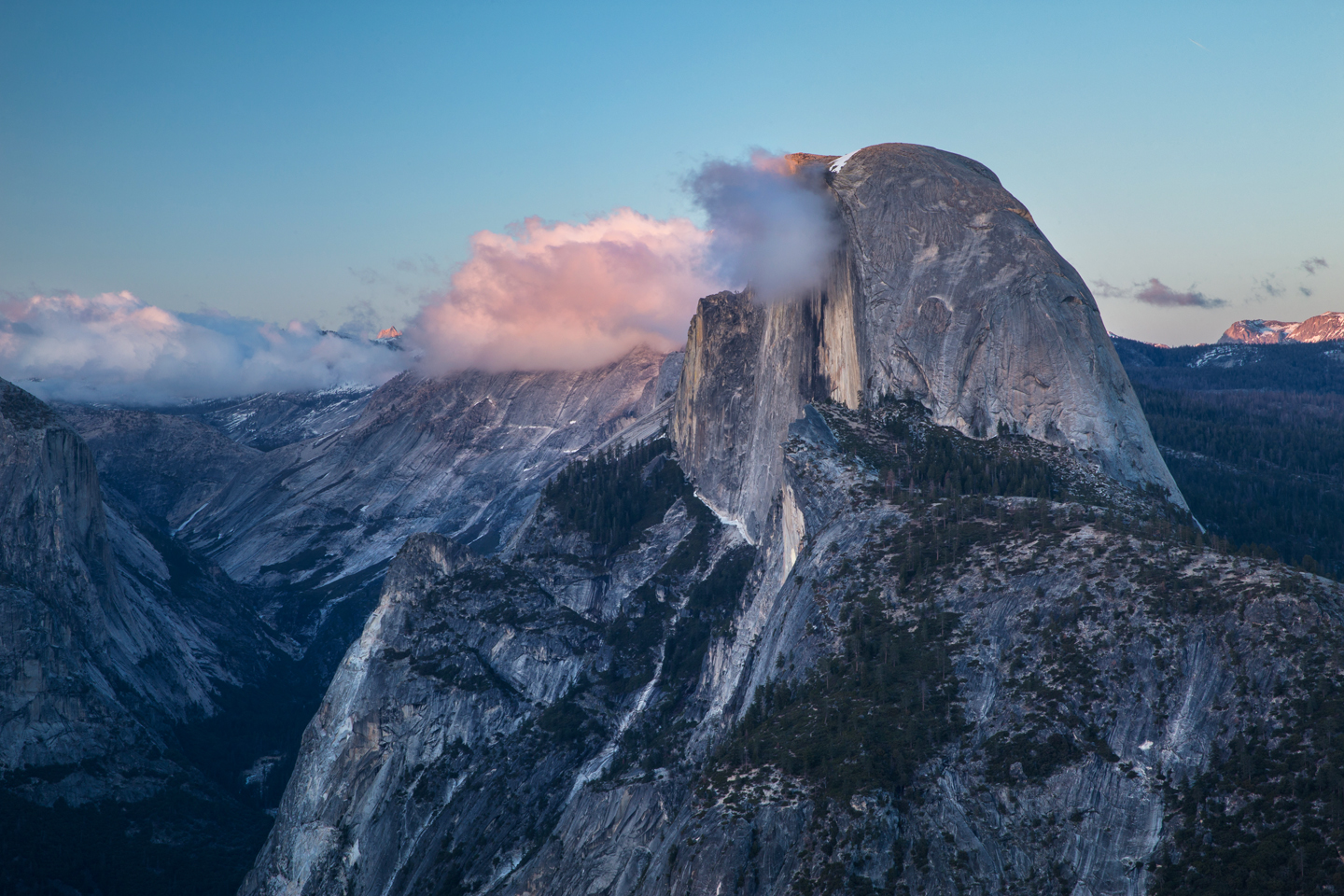 At just past 8:00 p.m., we hopped in the car and hit the road to head home. With our stomachs growling, we made a brief pit stop for burgers in Oakhurst, before jumping back in the car. After 10 miles and a long day in the car and on the trails, a Western Bacon Cheeseburger and criss-cut fries never tasted so good! The last 3.5 hours of the drive home were tough as both Julie and I were exhausted from the day’s adventures, but we made it home by 12:30 a.m. A half-hour later we were out cold, the product of a 21-hour day of exploring one of our favorite places. We can’t wait to head back again! 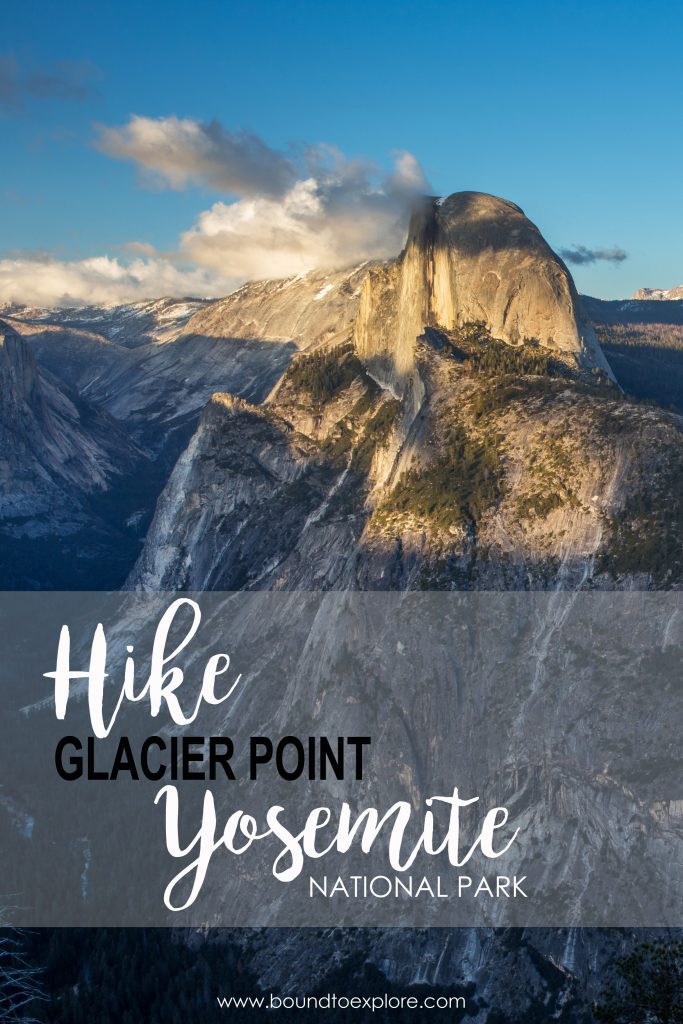