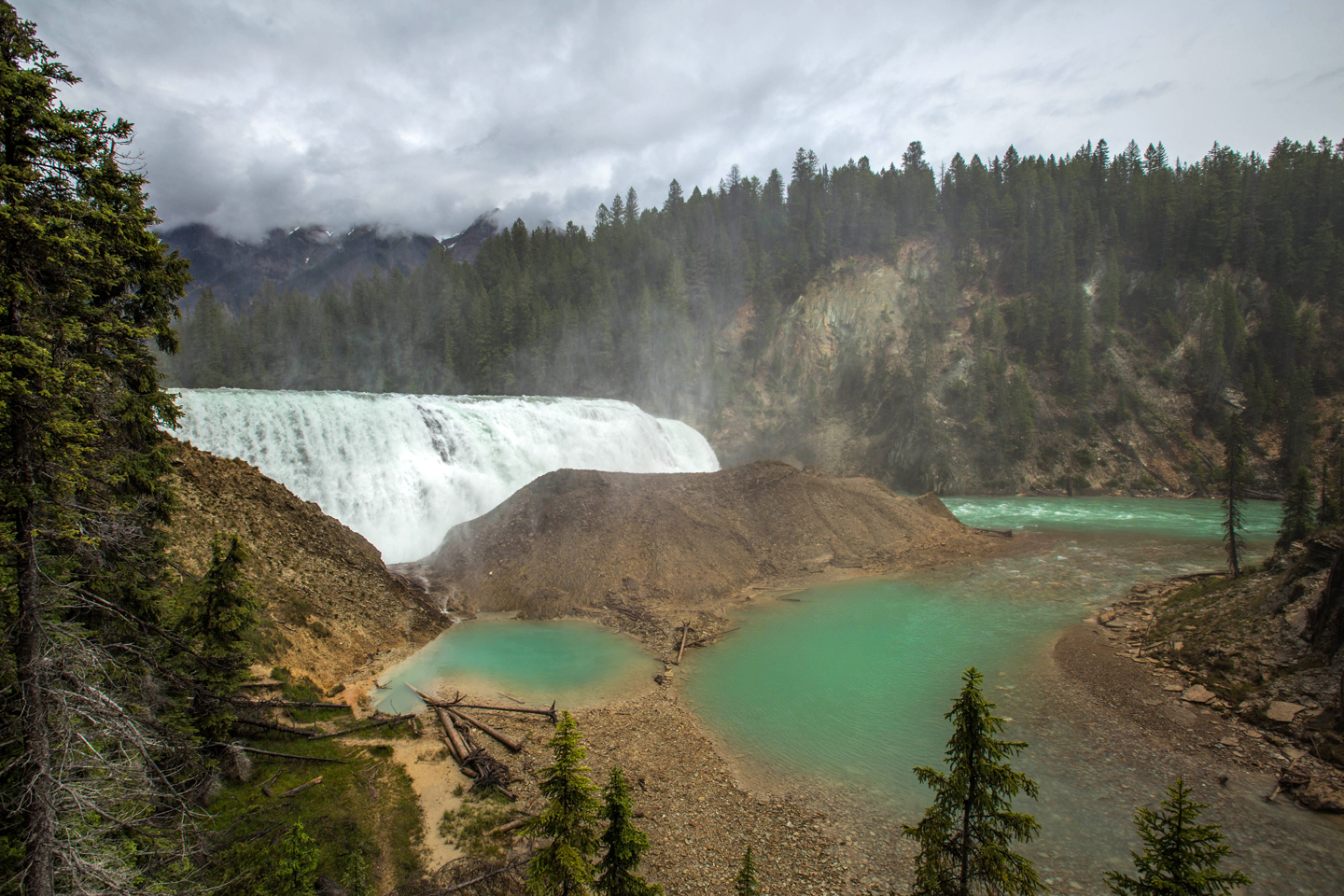 It’s our second to last full day in Canada, and Julie and I are trying to decide what we want to spend it doing.

Much of the trip has been a bit different than we had hoped due to the rain, and in some cases, snow, that have accompanied our week in the mountains of Western Canada. Instead of being early summer, the June weather has felt a lot more like late winter, and it’s set to be another cloudy day.

Hoping to see something new, I suggest driving through Kootenay National Park, just south of where we have been spending the past several days in Yoho. Unfortunately, the clouds are covering up any chance of seeing the mountains, aside from the occasional glance we catch of snow capped peaks. We know that with so much left that we want to see and do, we’ll need to plan another trip back to Canada, but a bit later in the season next time. We are determined not to let the weather get us down, so we decide to do one of our favorite things when in the mountains, visit a waterfall.

Distance: 3.94 miles (official distance is 3 miles, but I wandered a bit more on this hike)

Hiking to Wapta Falls: The Trail 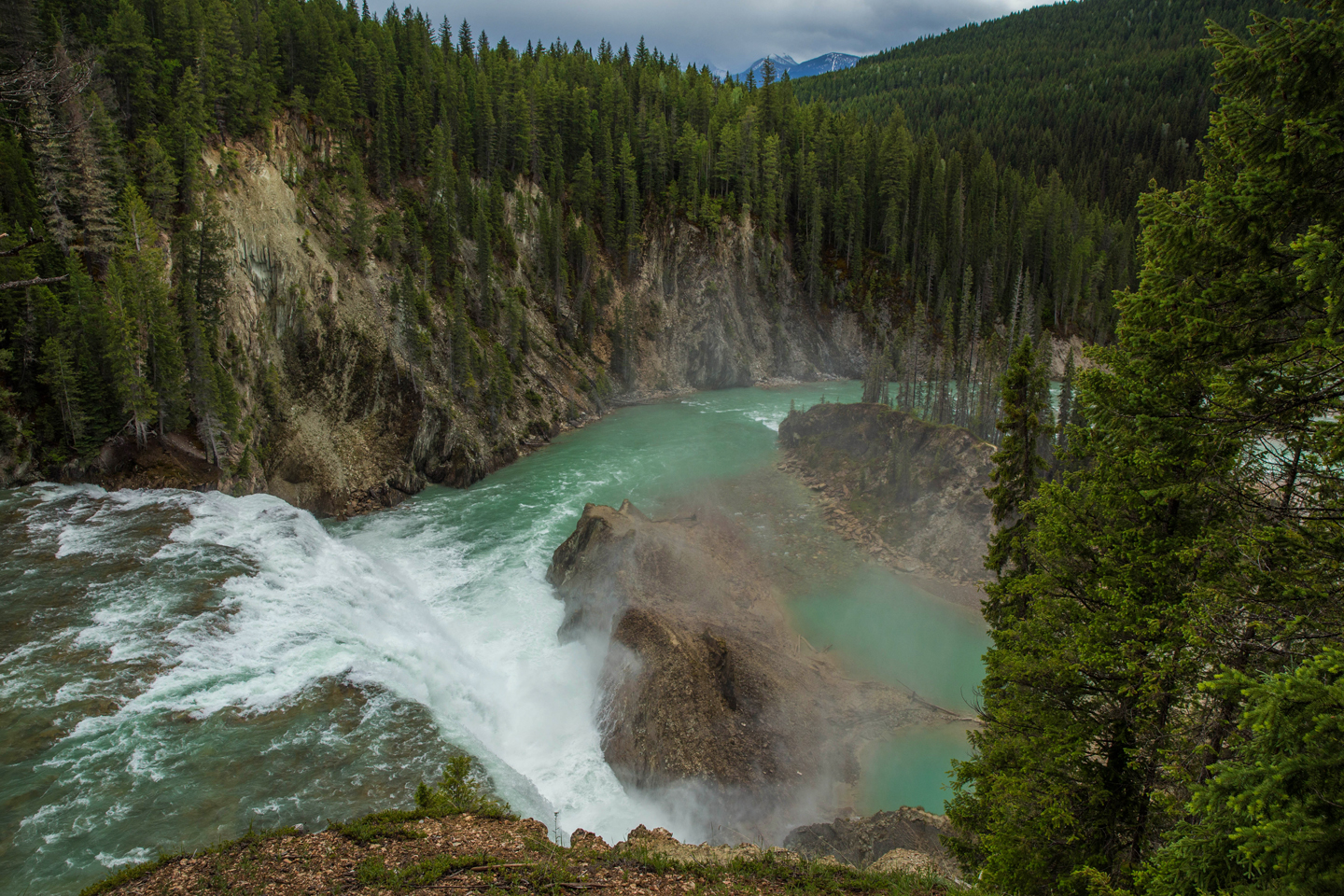 The trailhead to Wapta Falls is just a short, 25 minute drive, south of the small town of Field where we had made our home base. Turning off from BC Highway 1, we headed about a mile down a dirt road, happy again that we had upgraded to an SUV, as we bounced along. About a dozen other cars were already parked at the trailhead and we snagged a spot as someone was heading out. As we started getting ready for the hike, I noticed a couple of mosquitos buzzing around, which we had to this point, done a good job of avoiding. And as they so often seem to do, Julie remarked that one had bitten her on the foot in the 20 seconds between taking of her casual shoes and putting on her hiking boots!

Once packed up, were quick to jump on the trail and passed some other waterfall seekers who were moving at a bit more of a leisurely pace than we preferred. The rain had let up by this point, and the trail was flat, so moved rather quickly through the patches of dirt and mud. Officially, the trail is a little over a mile one way, to reach the falls. There is a viewpoint where you can see the falls from above, but continue on a bit further, and you can really get a feel for the falls up close and personal. 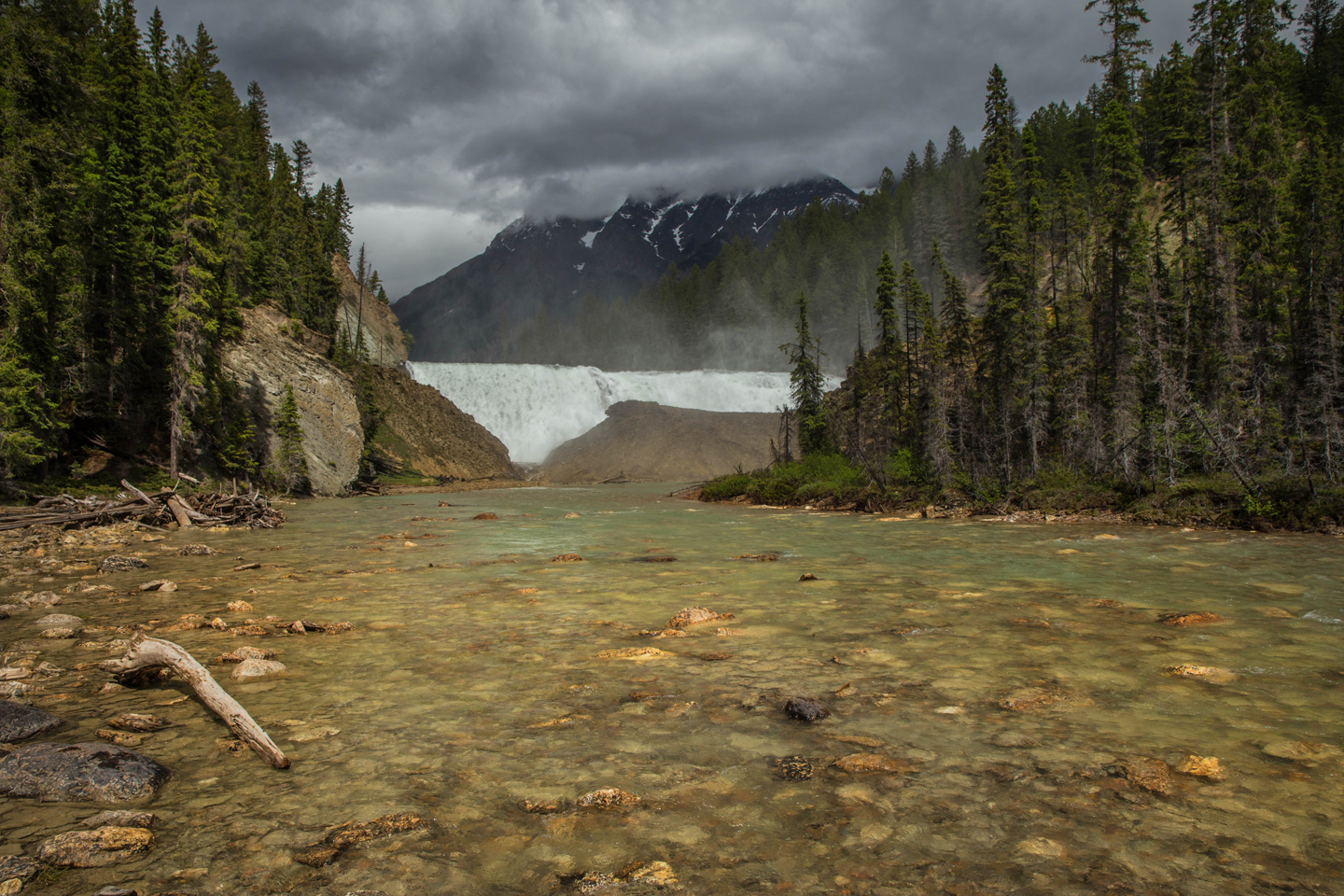 Wapta Falls is a bit unique in that you don’t get a completely clear view of the falls, even from the base. That’s because there is a large dirt/rock pile obstructing a good portion of the view. You can see this from above, but it’s even more pronounced when you reach the end of the trail. We walked along the edge of the water until we reached a small series of rocks that are essentially, a makeshift bridge across to the rock pile. At this juncture, the spray from the 98 foot high, 490 foot wide waterfall started to hit us with a pretty good dose of water. I circled around to the far side of the rock pile and despite the water, found it wasn’t too slippery, making it to the top with ease. From here, it’s hard to see straight as the mist hits you right in the face, and you can feel the full power of the falls. We didn’t spend much time on the rock pile as it the water spray was pretty overwhelming. 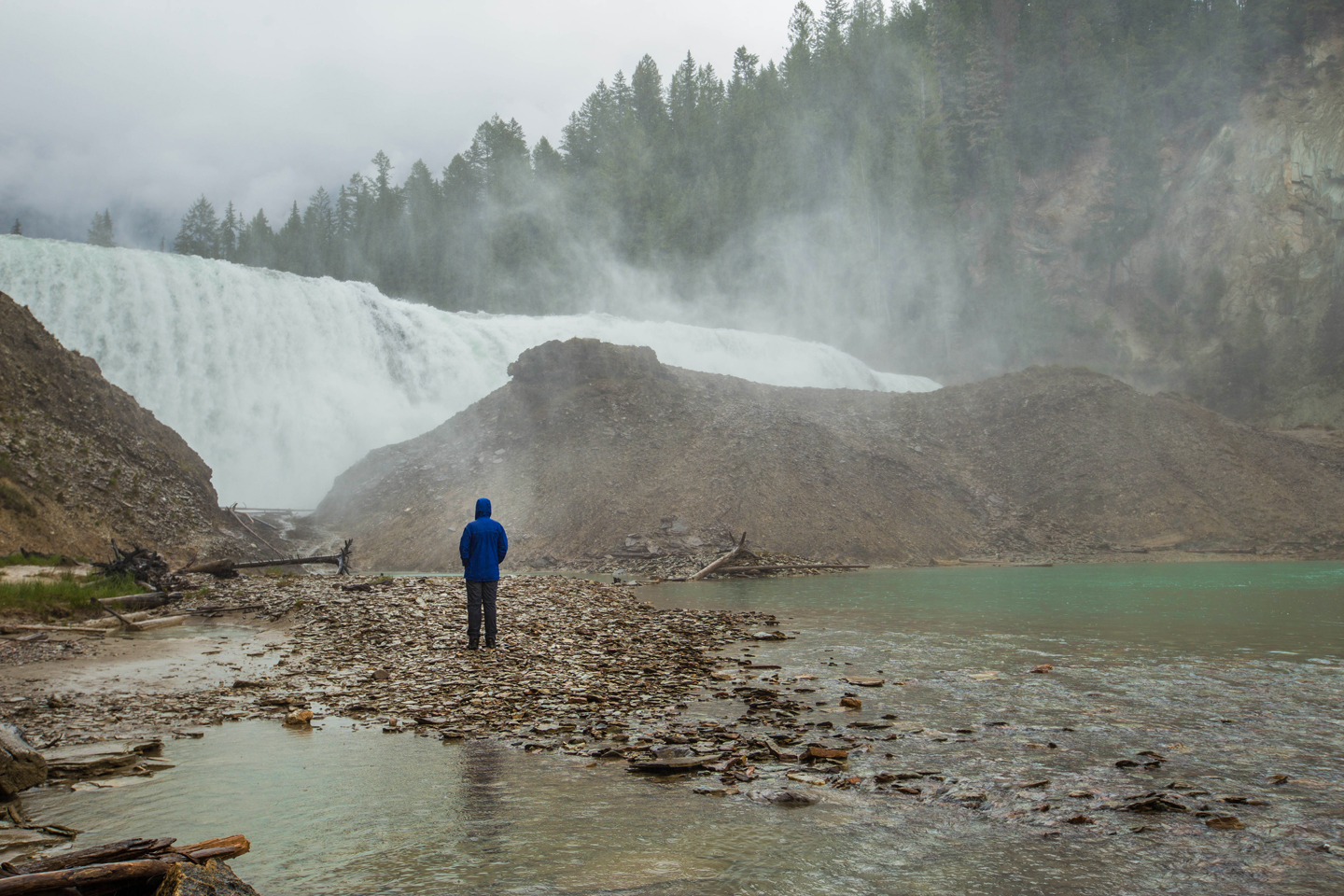 After getting thoroughly soaked by Wapta Falls, we headed back along the shore, and Julie set up for some photos. By this point, we were joined by several other small groups of hikers who had reached the falls. I was sure to warn those who looked to be heading for an up close vantage point with the falls that they would end up getting soaked like I was. 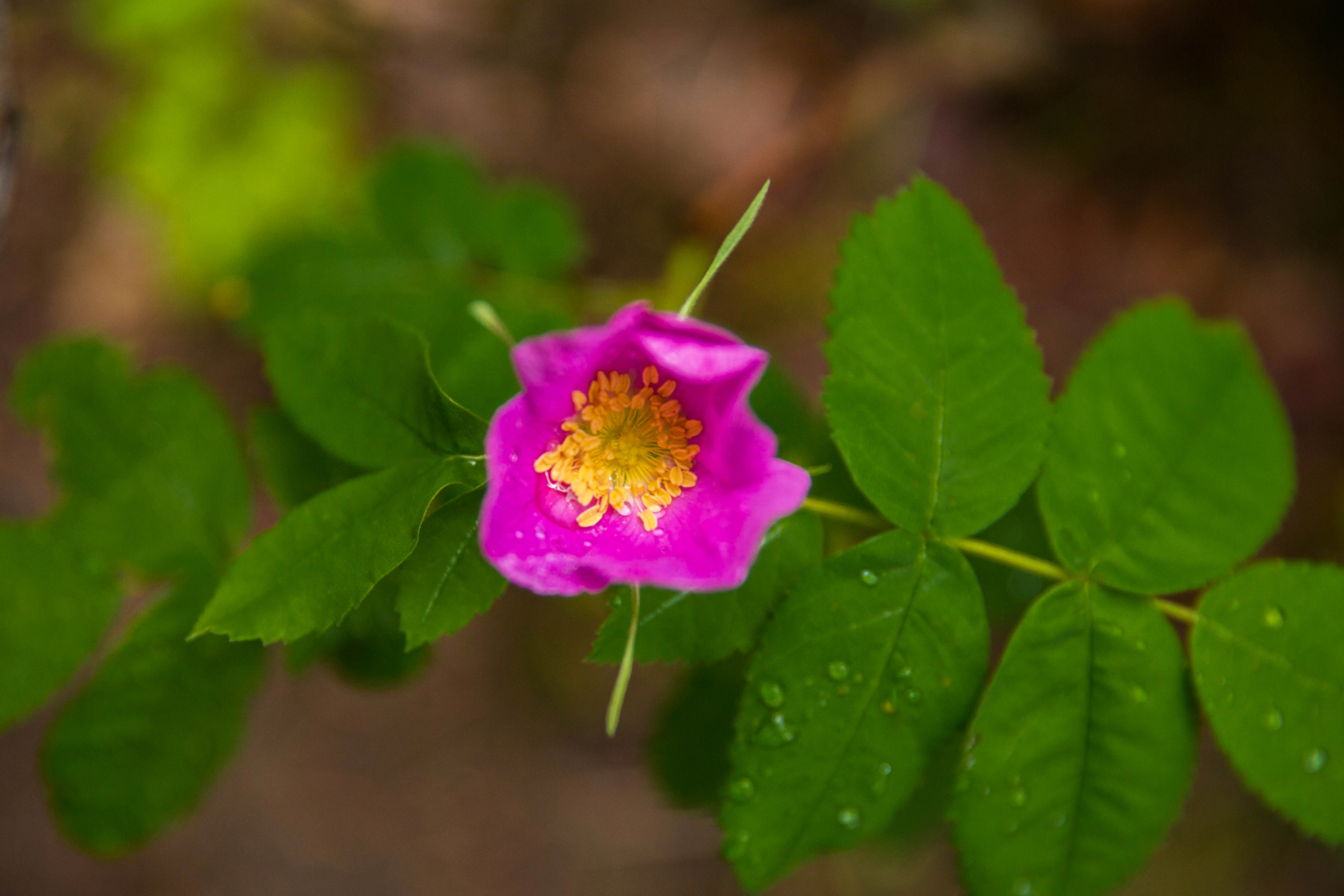 We ended up spending about an hour or so just hanging out and taking photos of the falls. I wandered around a bit, exploring the small stretch of the shoreline before we were ready to head back to the car. There seemed to be more bugs on the way back as the skies had cleared up, so we kept a good pace and avoided stopping, making good timing. Throwing off our muddy boots, we said goodbye to Wapta Falls and were off in search of our next adventure.

Have you been to Wapta Falls or are you planning to go? Let us know in the comments! 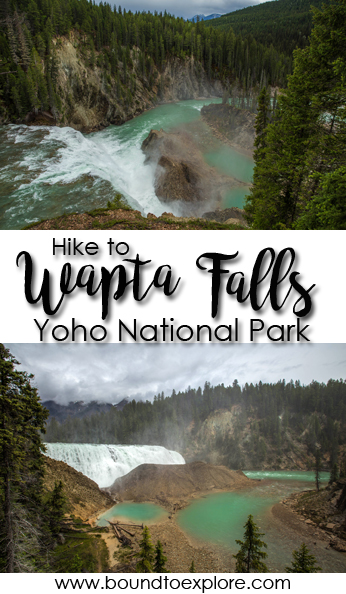