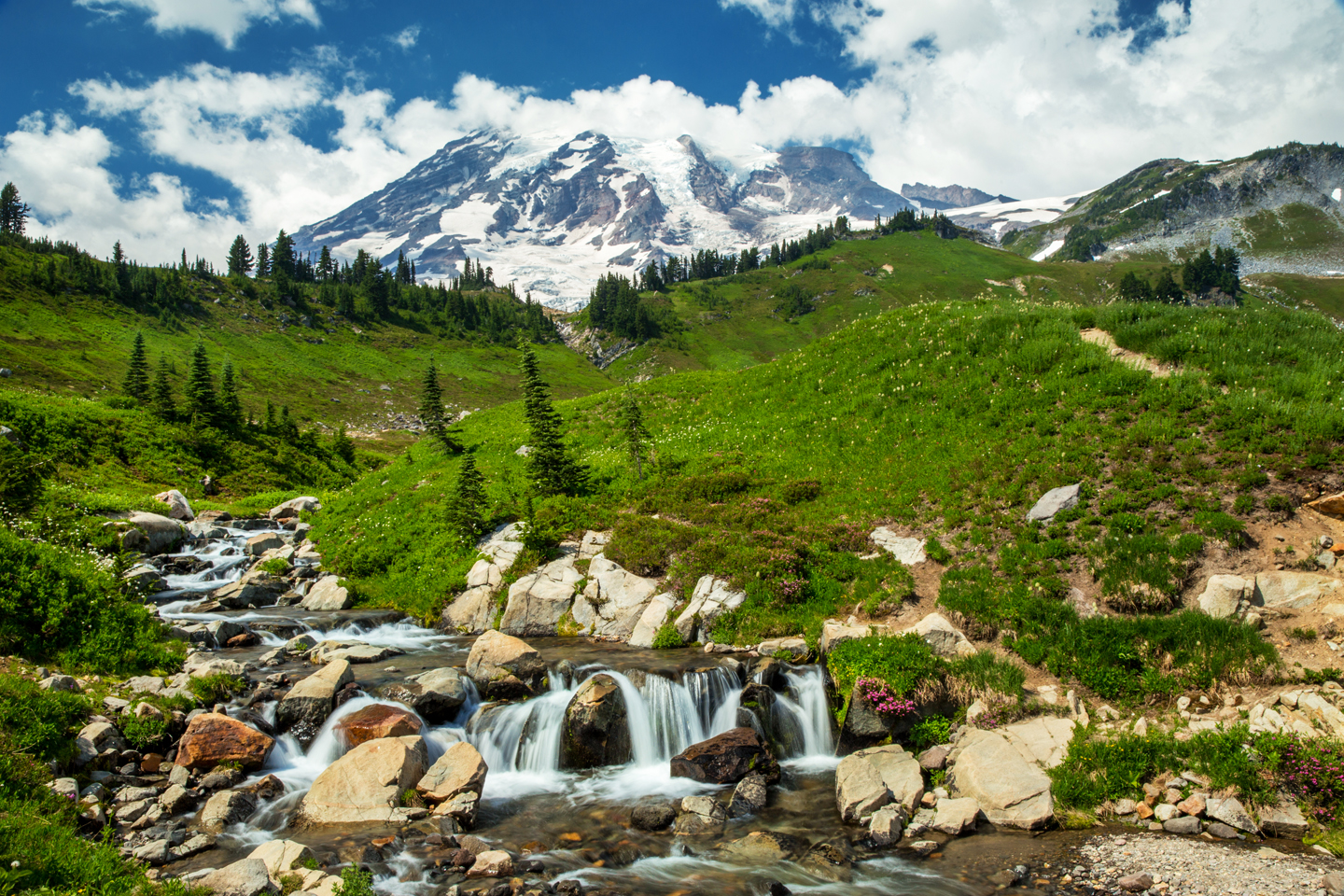 When best laid plans fall through, improvisation is the spice of life.

For a couple months leading up to our first wedding anniversary, Julie and I had been working through ideas of where we would be heading to celebrate. We knew we wanted to spend it outdoors, and all roads lead to a trip in Yosemite where we would finally be able to dip our toes into the world of backpacking.

Unfortunately, just a few weeks prior to our planned trip, a summer fire started near the park, and we were forced to consider alternate options. As the days grew closer, our new trip plans had not materialized as we went back-and-forth about where to go. Much of the Sierra Nevada Mountains were covered in unhealthy air quality, and many of our other hiking ideas were likely to be impacted in some way by the fires or the summer heat.

On Thursday night, as we sat starting at our computers searching for ideas, we came to the spontaneous idea to fly to Washington, and spend the weekend in Mount Rainier National Park. We booked our flight for next morning, happy to be visiting someplace new, and hurriedly set out to pack our bags.

Early Friday morning, we hopped in our Lyft and headed to the airport for our flight from San Jose to Seattle. Because we have TSA Pre-Check, we tend to arrive about an hour or less to the airport for our flights. Generally, this isn’t a bad idea since we usually fly short distances, and only bring bags that we can carry on. But since we were planning to go hiking on this trip, we both completely spaced on the fact that we were going to need to allot extra time to check one bag of gear. There was, of course, a line to drop our bag, and when we had just about reached the front of the line, the fire alarm went off in the terminal. Most people just looked at each other and went back about their business, until a security guard yelled that everyone needed to exit the building. A few minutes later, the alarm stopped and we headed back inside, but we were no longer at the front of the line. As our flight time inched closer, we headed upstairs to pass through security, where I was promptly stopped for secondary screening. Julie continued on so that she could save us a seat as our flight was already boarding.

The TSA agent went through my backpack, and just as they were about to release me said that my laptop dinged and that I would need to have additional screening. I proceeded to wait, while they found a male TSA agent to come provide me with a full pat down, and they sent my laptop back through the x-ray machine. Time ticked on, and I impatiently waited to be released, which finally happened some ten minutes later. I looked at the flight gate number and came to the sad realization that our Southwest flight had been allocated to the other terminal. So, I set off running what must have been a half-mile from Terminal B to Terminal A, where I was the last person to board the plane.

Our flight then proceeded to be delayed an extra hour, and for good measure, as the last person to board, I was left with a middle seat alone between an older married couple. After the whirlwind morning, our flight was finally permitted to leave, and we made the short, two-and-a-half hour flight up to Seattle. We spent the remainder of our day visiting with Julie’s aunt and uncle in Port Orchard, before heading to our hotel room for the evening. 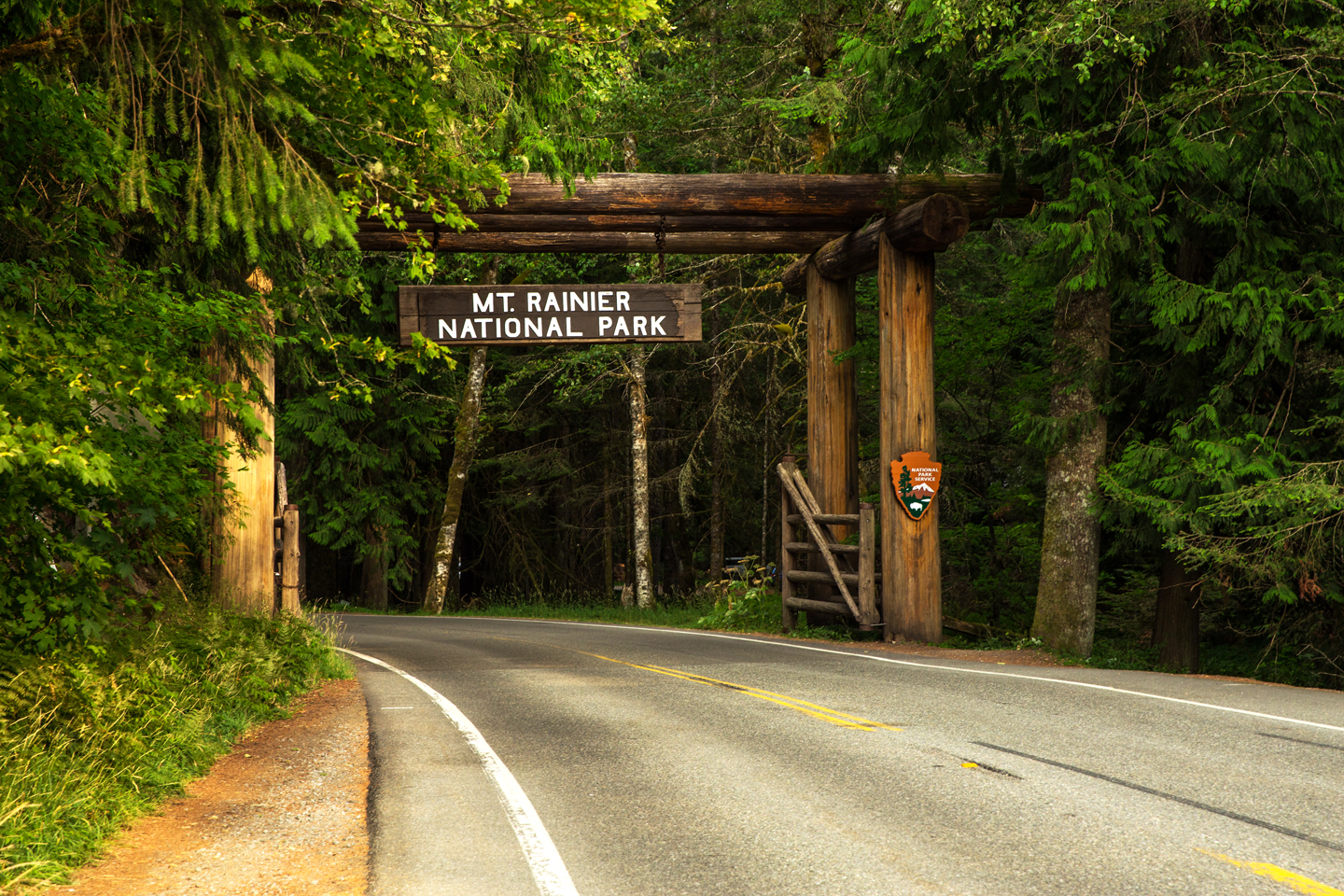 Our first trip together to Washington in November of 2017 found us spending most of our time exploring the state with a steady rainfall. We split our time between Seattle and driving through Olympic and North Cascades National Parks. While we had hoped to also visit Mount Rainier, the park was being blanketed with snow throughout our stay, and we felt it best to save it for a future trip. Fast forward to our anniversary trip, and we were excited to dedicate our weekend to exploring Mount Rainier.

On Saturday morning, we woke up early, packed up our rental car and made the two-hour drive from Olympia to Mount Rainier National Park. The drive through the park and up to Paradise is scenic, particularly in the lower forest near the entrance to the park. When we arrived at the parking lot for the Skyline Trail around 8:30 a.m., we were pleasantly surprised at how busy with hikers it was. Fortunately, we were able to secure a parking spot, and began getting ourselves ready for our hike. Besides being the starting point for an incredibly popular hike, Paradise also hosts the Henry Jackson Visitor’s Center, Paradise Inn (a historic lodge), a Guide House, and Ranger Station. After grabbing a quick breakfast from the lodge, we layered on the sunscreen and bug spray and hit the trail.

“…the most luxuriant and the most extravagantly beautiful of all the alpine gardens I ever beheld in all my mountain top wanderings” – John Muir, conservationist, 1889 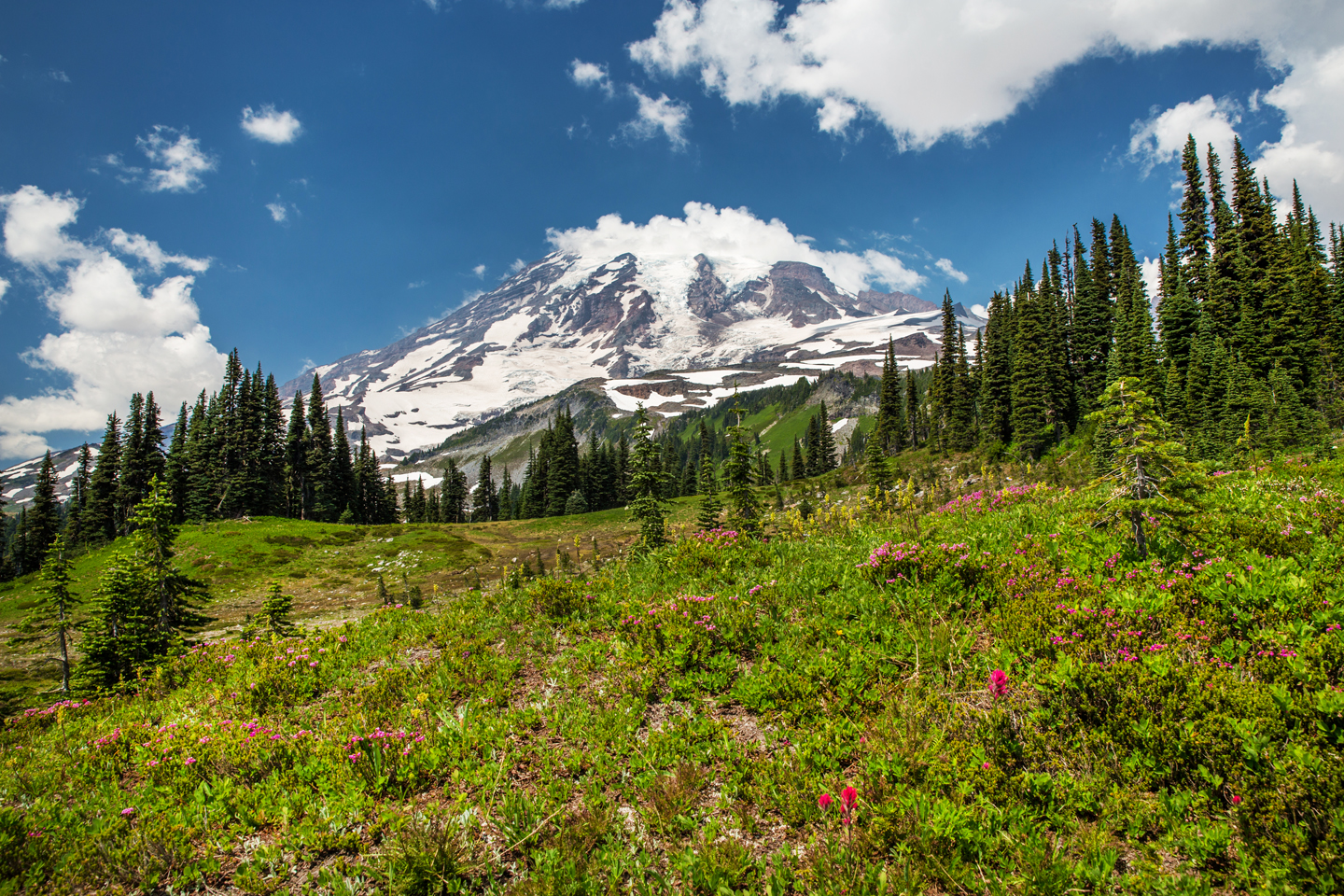 Written on the steps that lead up to the Skyline Trail, it’s safe to say that John Muir visited some of the most beautiful destinations in the West. Seeing his name almost gives you a sort of calm; knowing you’re in the right place. Within a few steps, it was easy to see why he spoke so highly of the aptly named, Paradise. The views of Mount Rainier are stunning from the moment we stepped onto the trail- the first portion of which is paved and directly uphill. 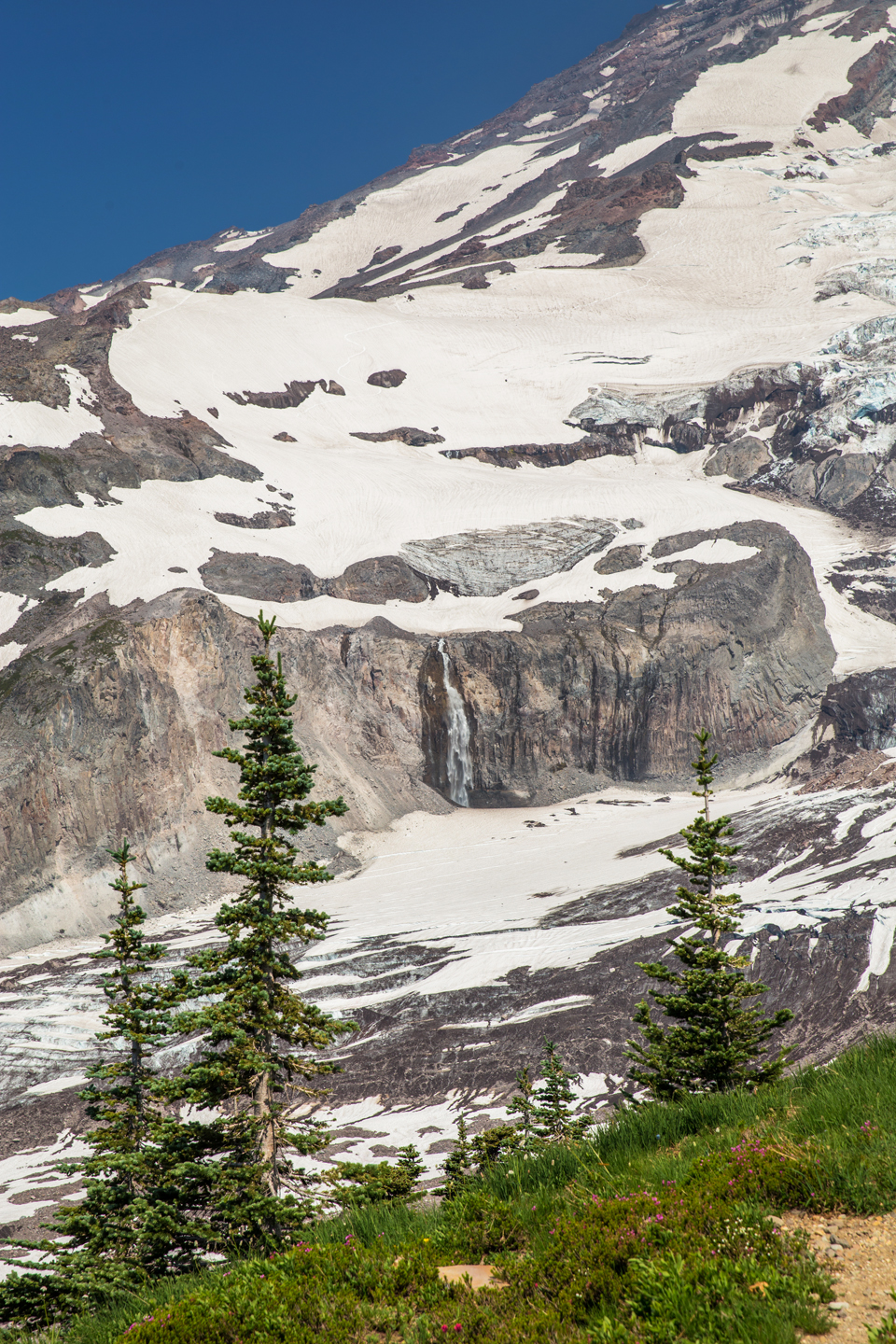 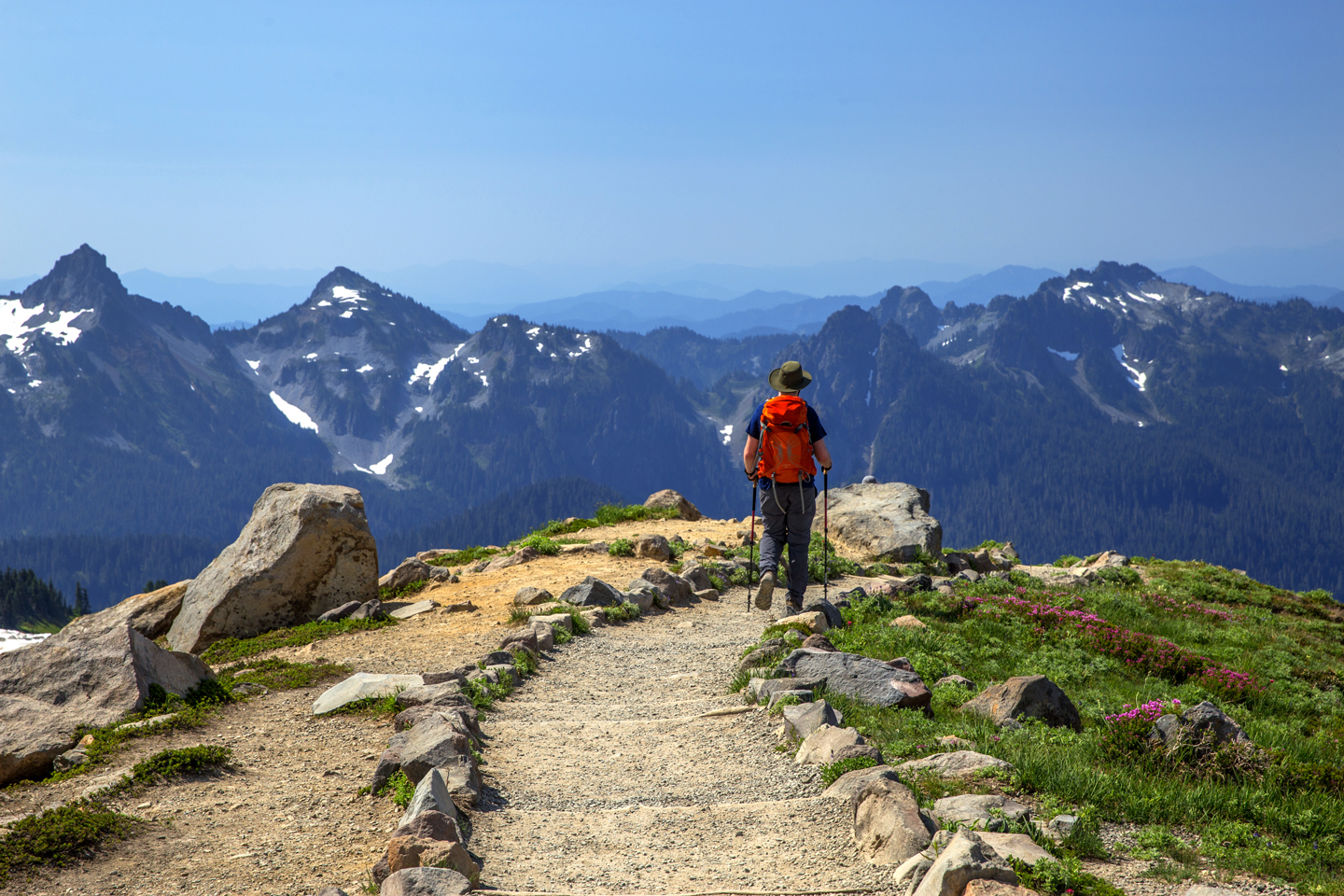 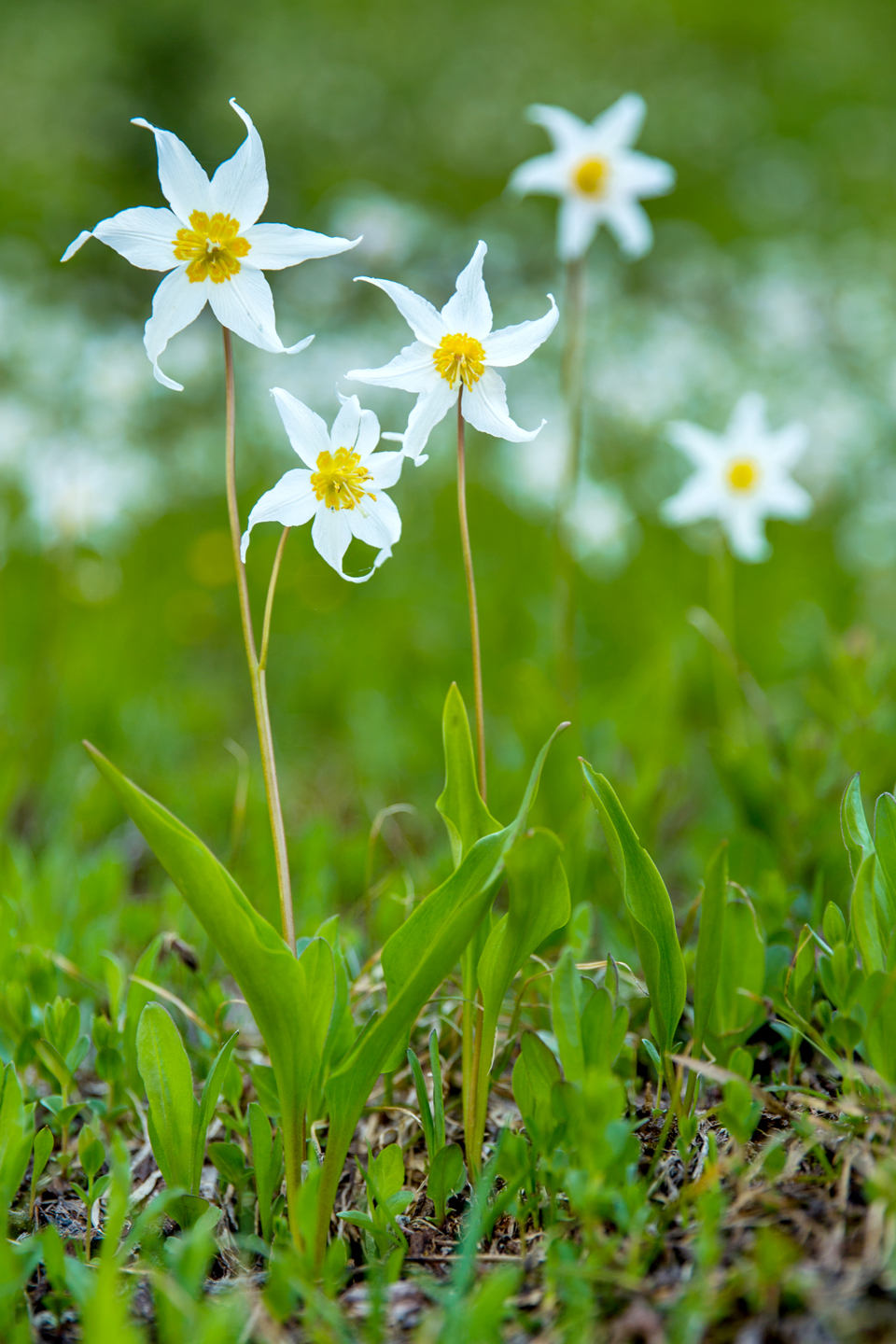 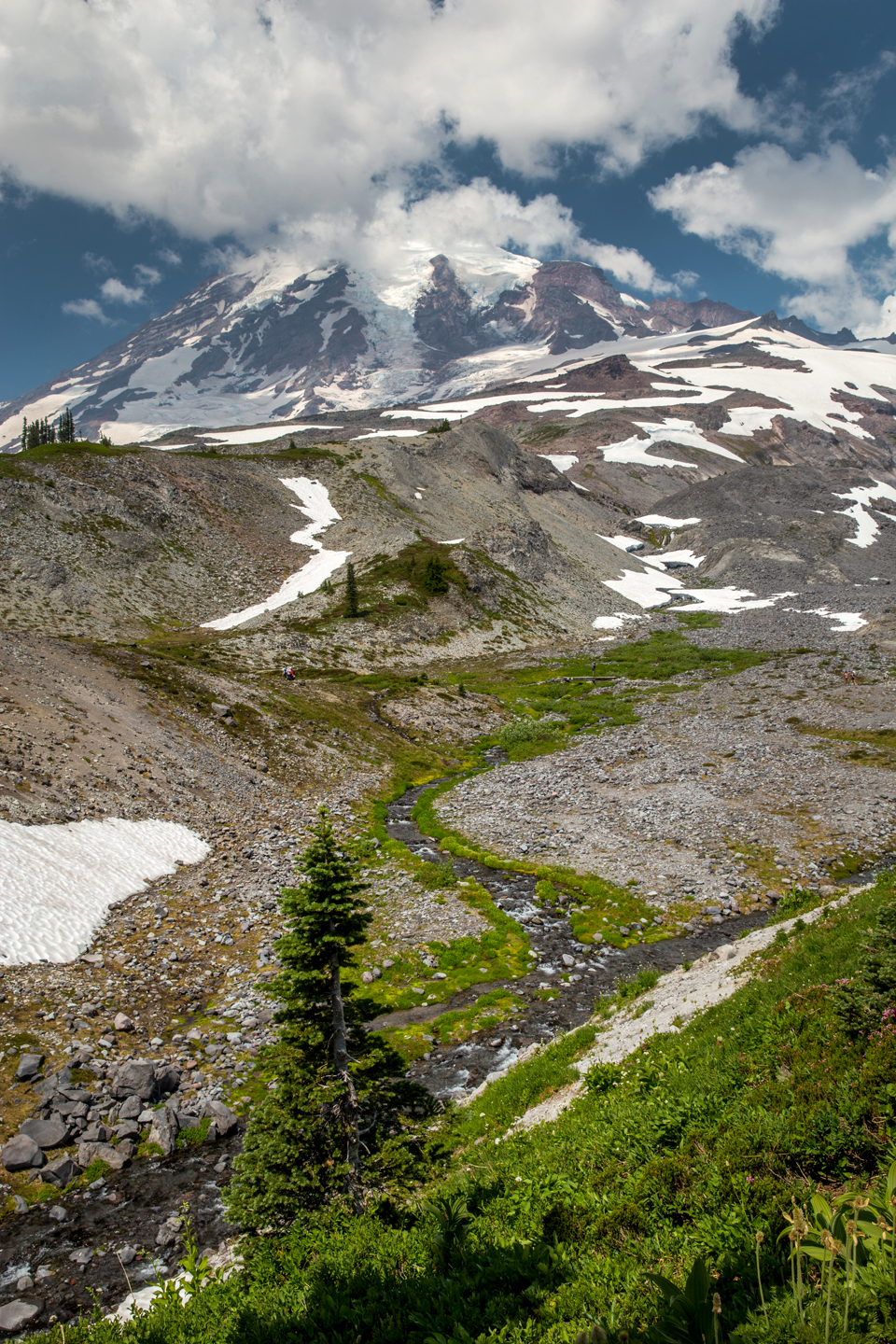 From the Paradise parking lot, which starts at an elevation of 5,400′, the hike climbs 1,400′ to Panorama Point at 6,800′. Normally, the views here are expansive, but the summer haze mixed with summer fires meant our views were a bit subdued. We stopped here for a bit of a breather, before continuing on with our hike. It’s worth noting that there is a also a pit toilet at the point, for those in need. 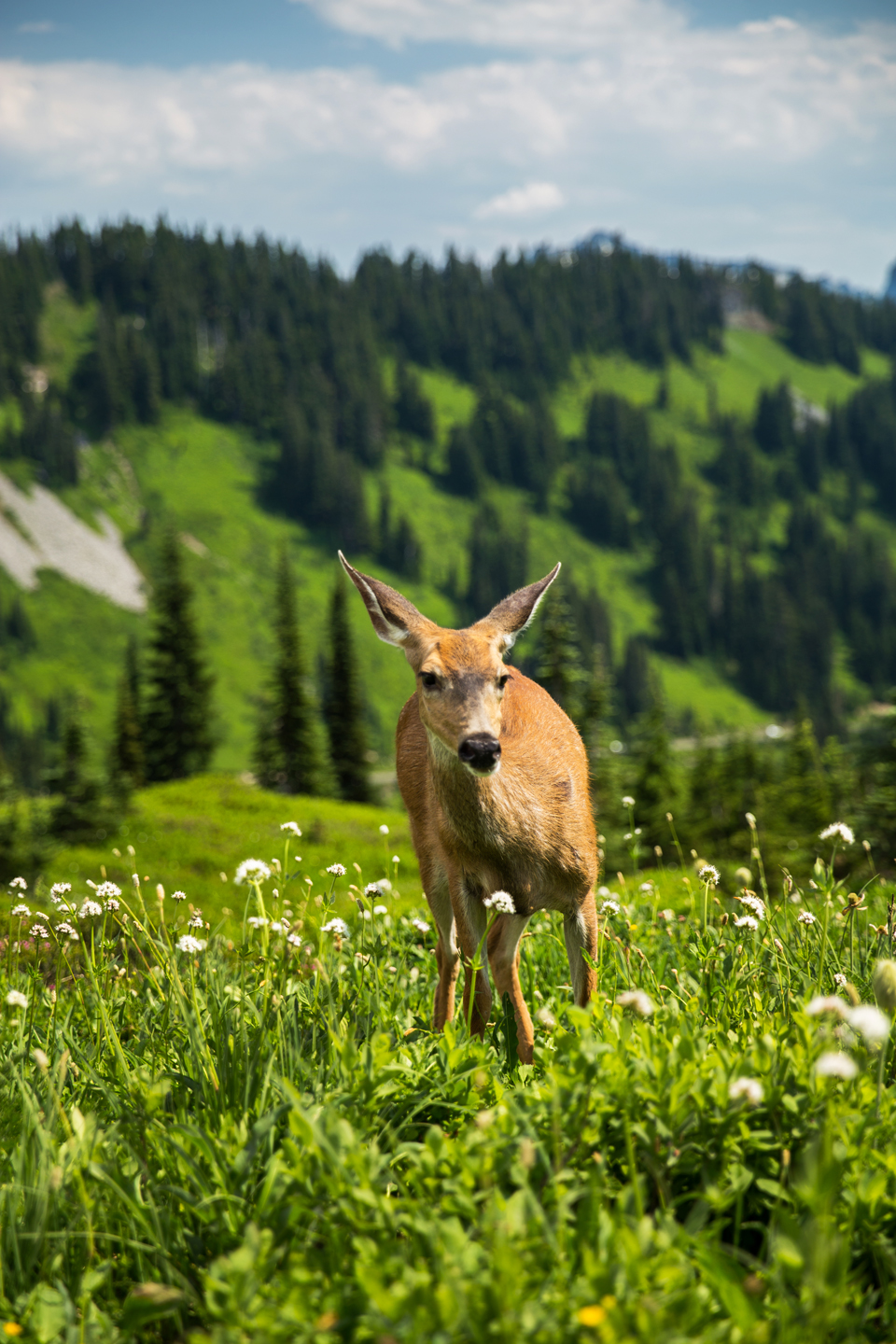 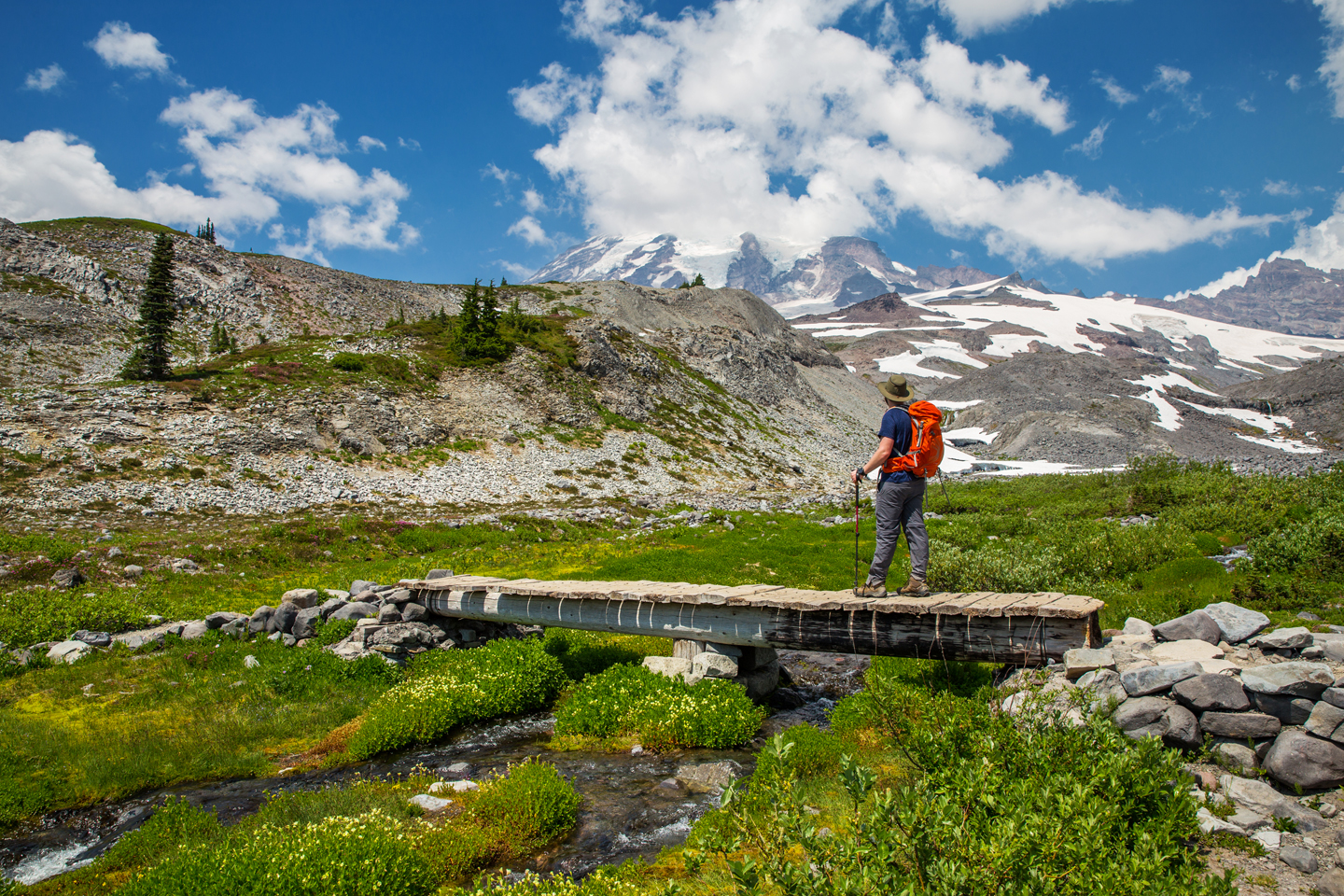 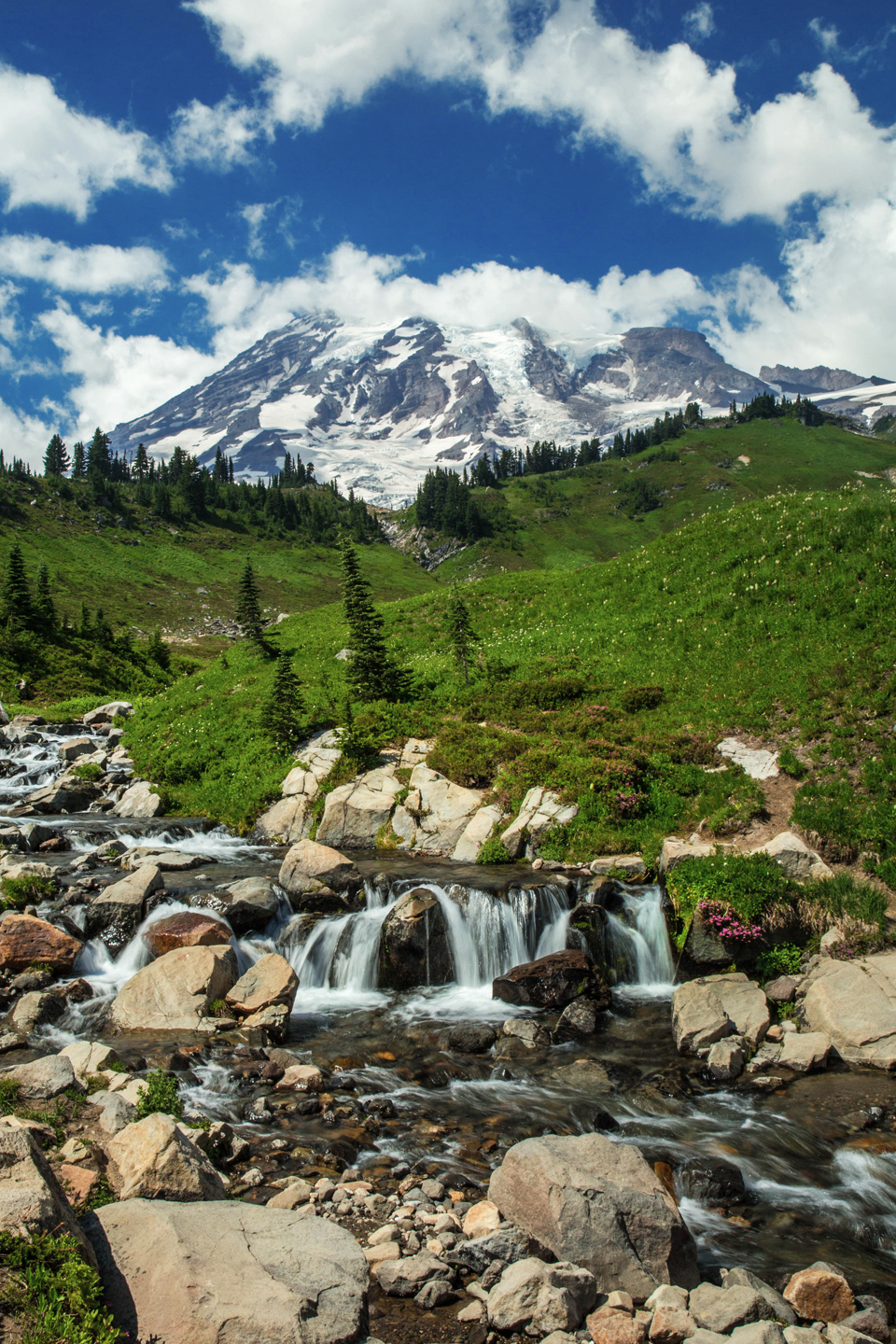 Continuing along, the Skyline Trail begins to loop back around and descend. Even at the end of July, we crossed over a handful of snow patches set among the lush, green alpine meadows. While there were some of the famous wildflowers, we were a bit too early for their peak season. 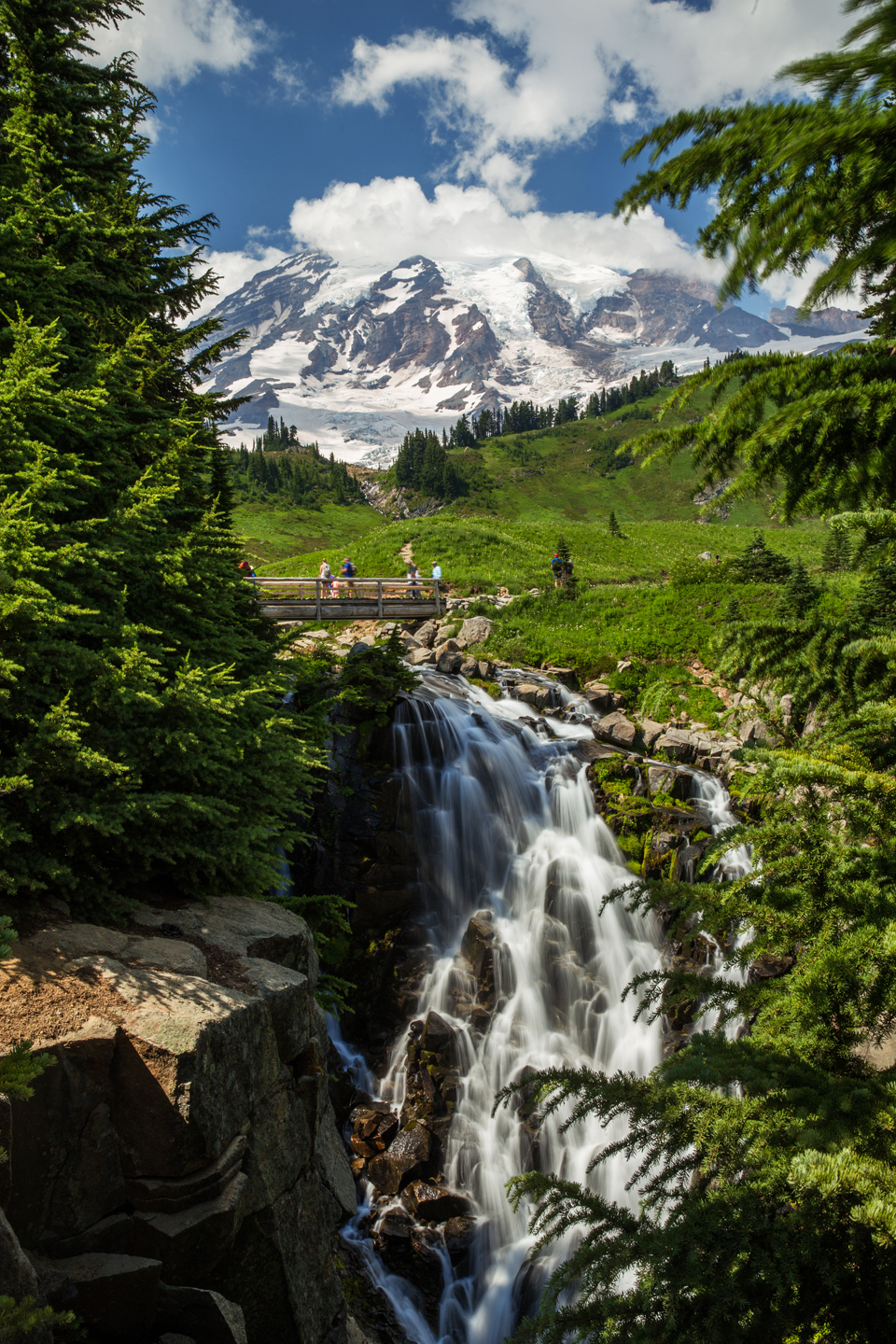 Along the Skyline Trail, we passed by a number of smaller waterfalls, but none more captivating than Myrtle Falls near the end of our hike. The falls tumble 72 feet into the Edith Creek formed gorge below and provides a postcard worthy image with Mount Rainier in the background. 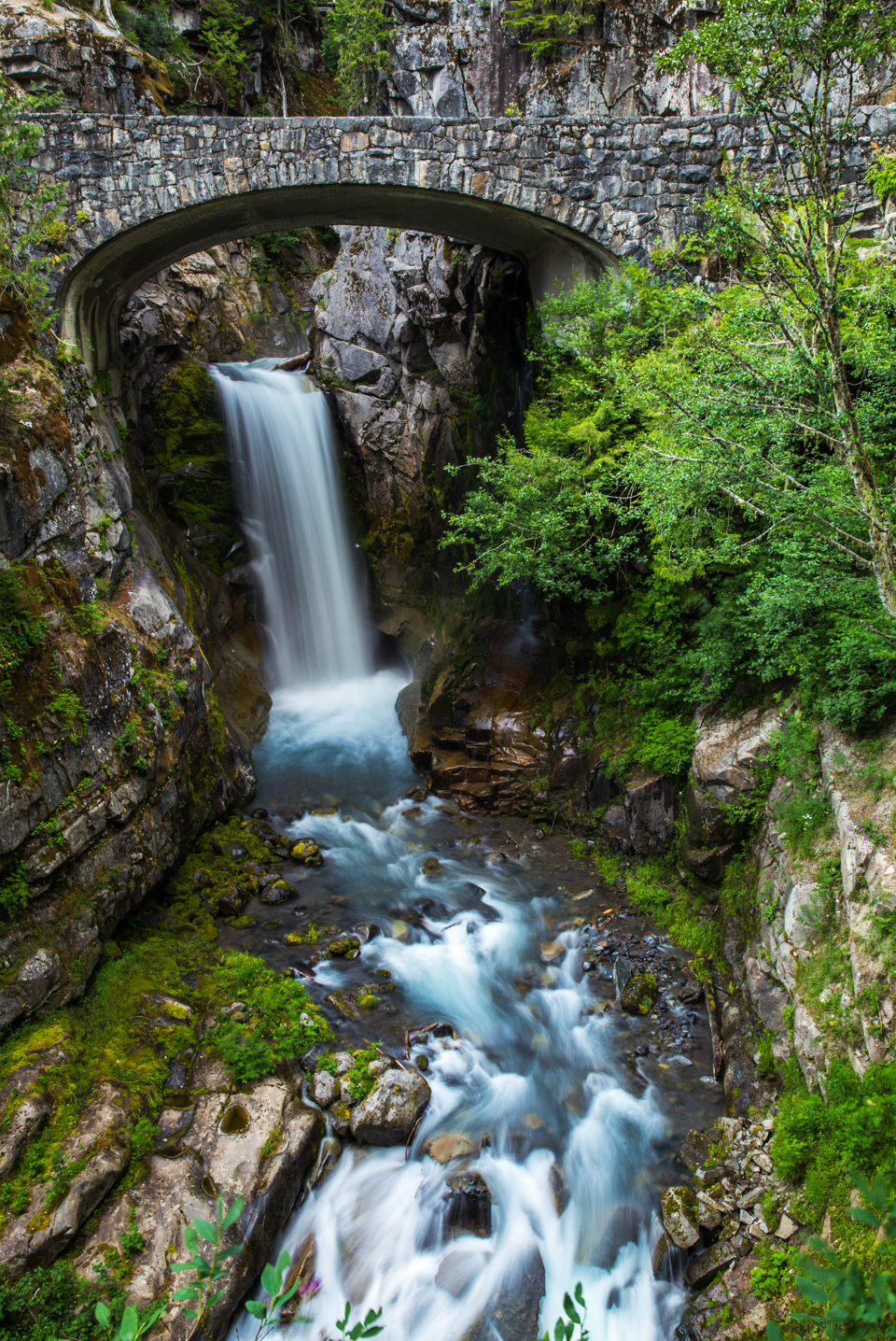 Back at the car after hiking the Skyline Trail, we were immediately grateful to have arrived early enough to find a parking spot. By the late afternoon, cars had packed all the remaining available space, extending down the road. Just seven miles back towards the entrance to the park, we stopped off at the Christine Falls Bridge. A short trail leads to a viewpoint of the falls cascading below the bridge, and we spent some time capturing images of the scene. 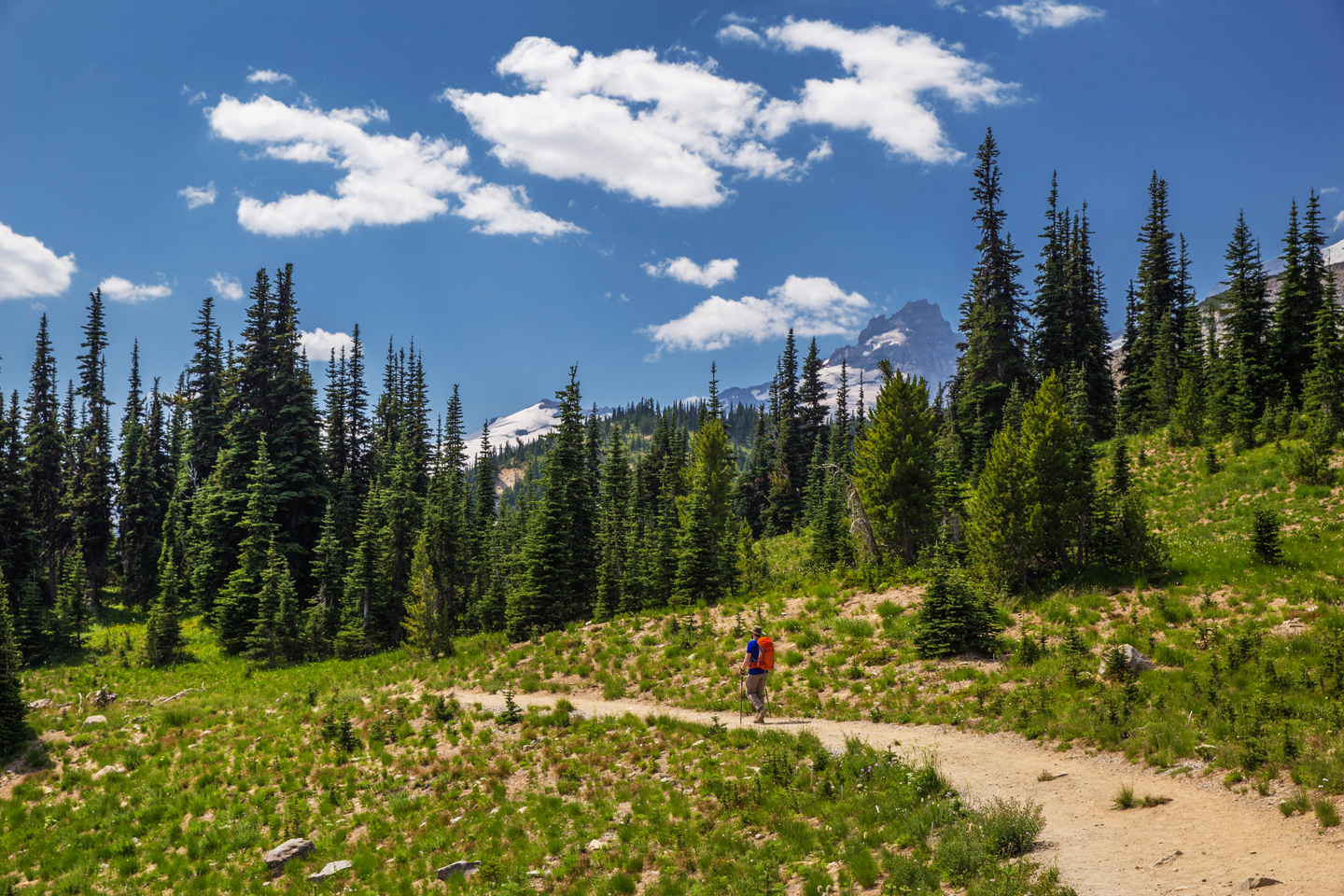 On Sunday morning, we headed back to Mount Rainier to explore the Sunrise region of the park. After a long day of hiking the previous day, we opted for a shorter trek to Shadow Lake and Glacier Overlook. From the Sunrise parking lot, the trail to Shadow Lake is about a mile, and it is a fairly easy walk. When we arrived at the lake, there were a handful of other hikers along the shoreline, but it was otherwise not very crowded. 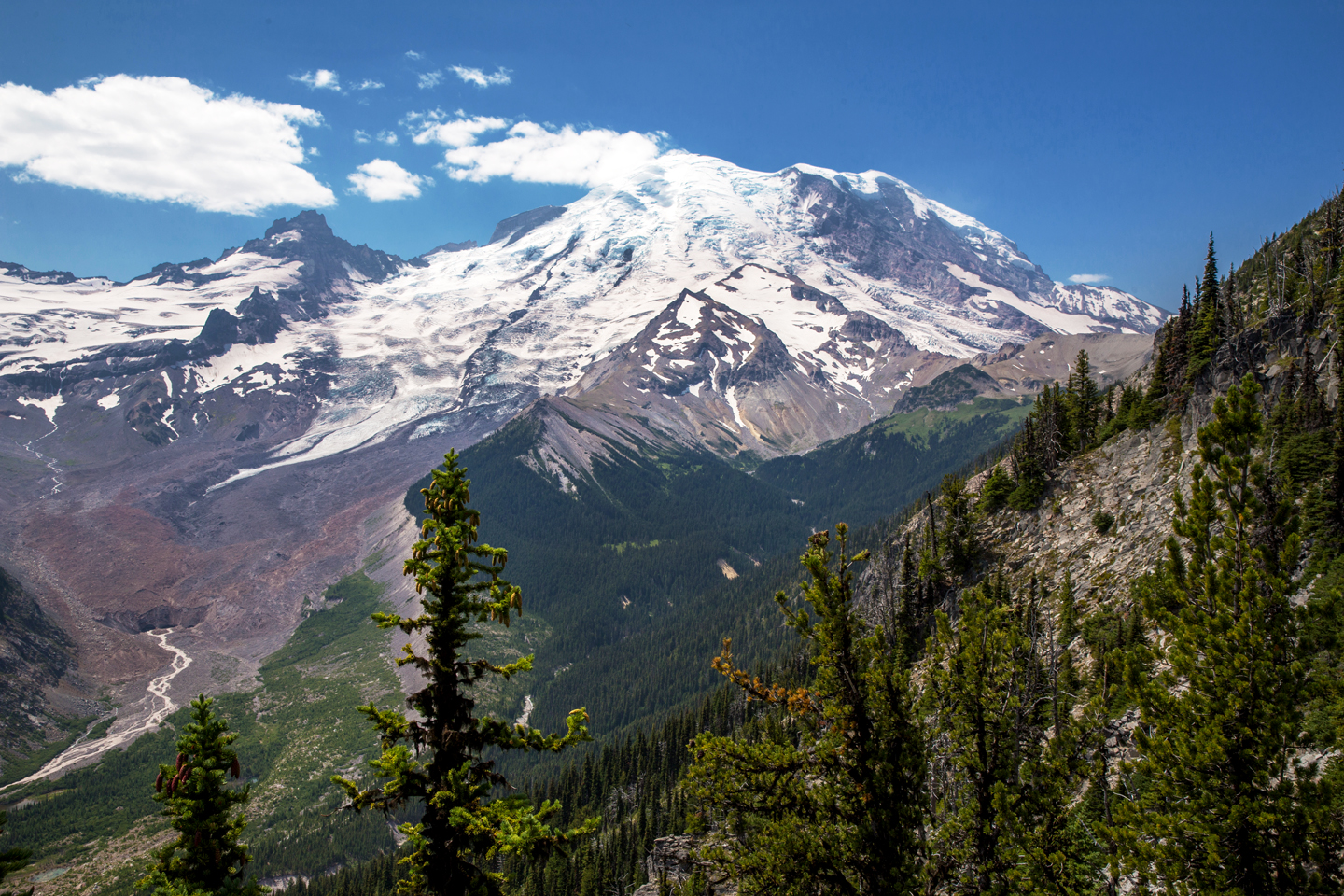 After spending a few minutes at the lake, we continued about another half mile uphill to Glacier Overlook. The views from the overlook were incredible looking out to Mount Rainier and a bright turquoise lake below. If we had any energy remaining, we would have certainly liked to have explored more of this trail, but the early afternoon sun had zapped us. We turned back, and headed back the way we came, taking a loop route back to the car, and enjoying some of the wildflowers starting to bloom. 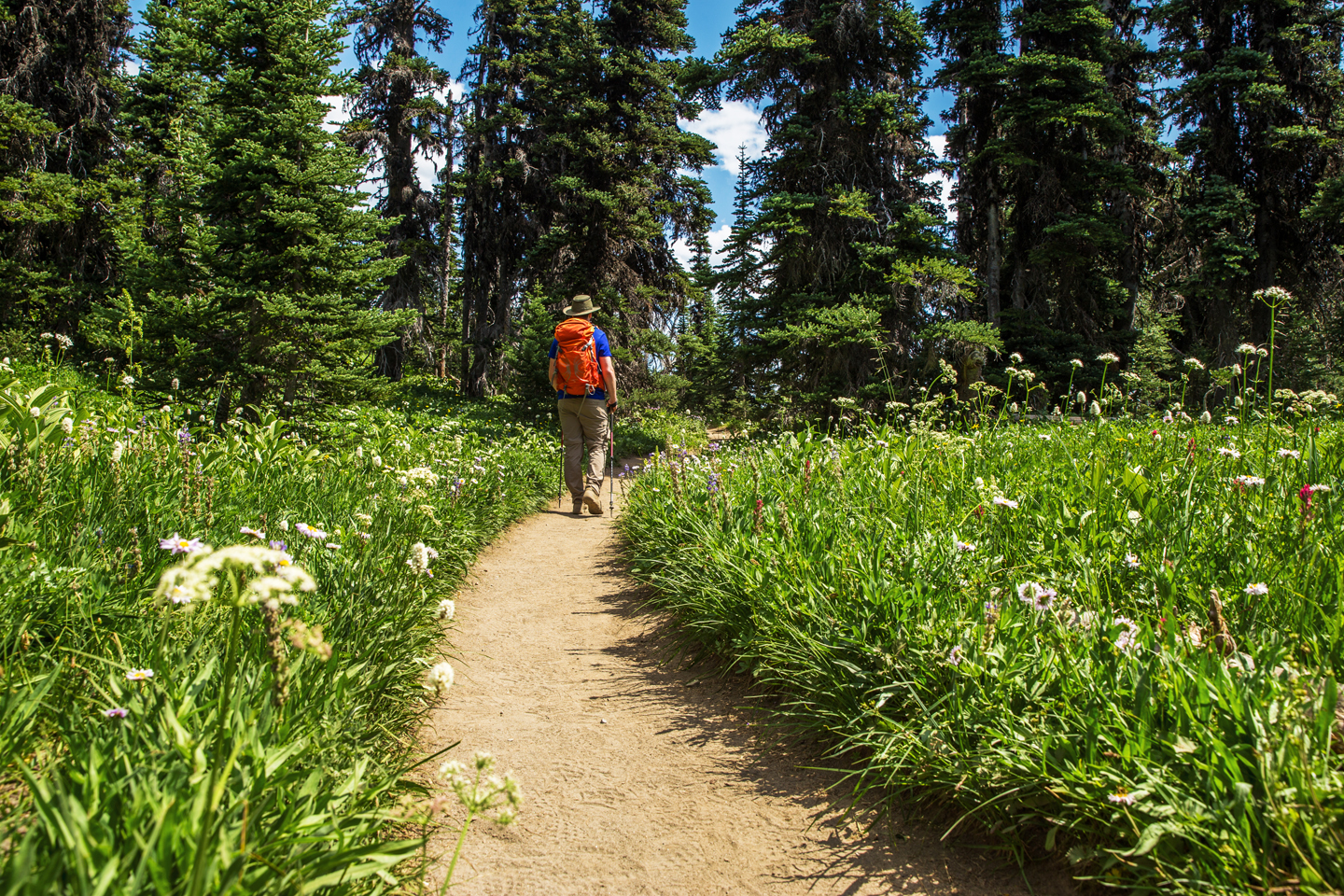 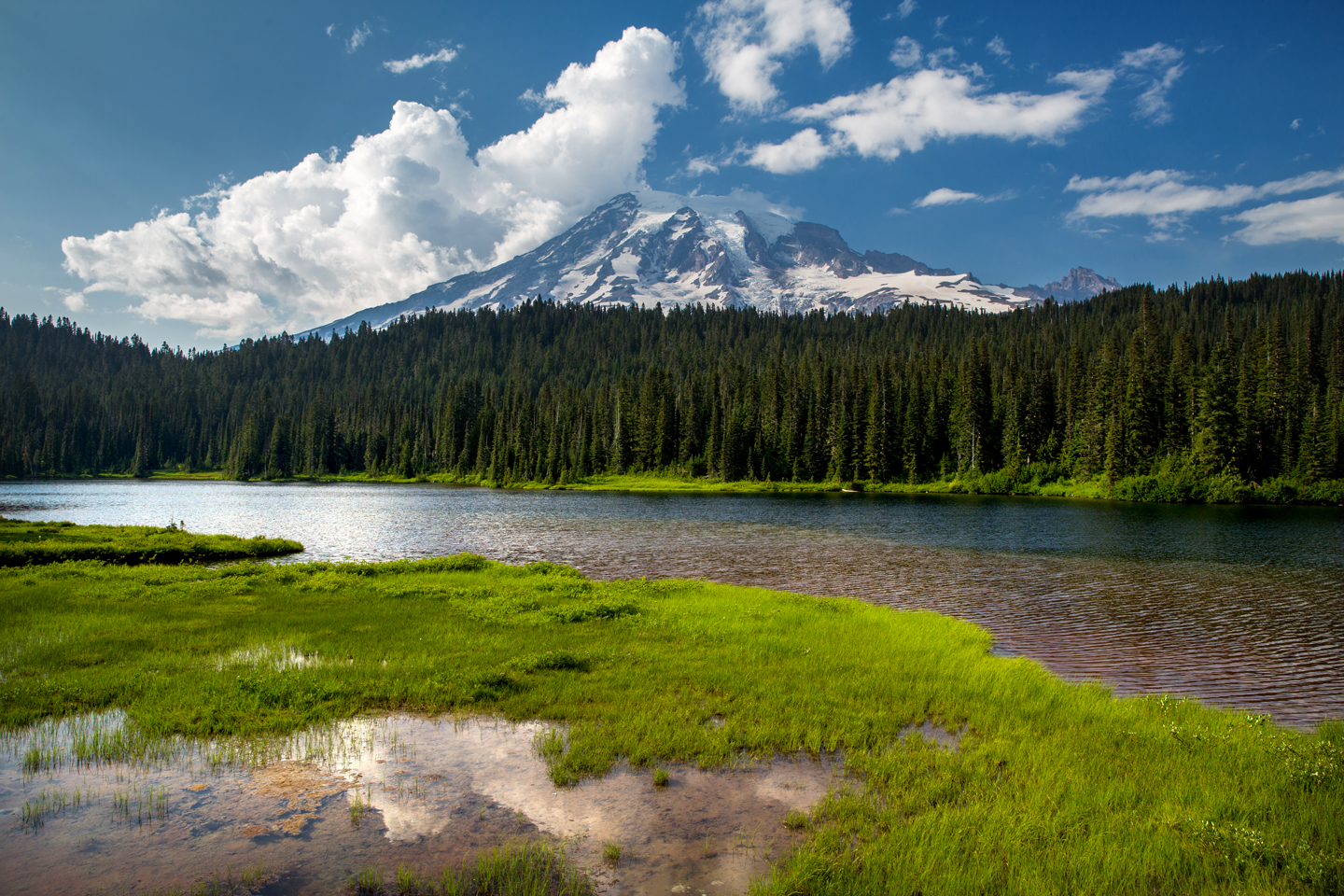 Our one-year anniversary trip to visit Mount Rainier ended up being a success, despite deciding on our destination just about 12 hours before departing! We certainly experienced some bumps in the road at the start of the trip, but being out in nature is definitely the cure for just about all that might ail us.

Mount Rainier was incredibly beautiful and  special place, and we can’t wait to come back to explore it further!

Shop Our Favorite Gear for this Adventure: 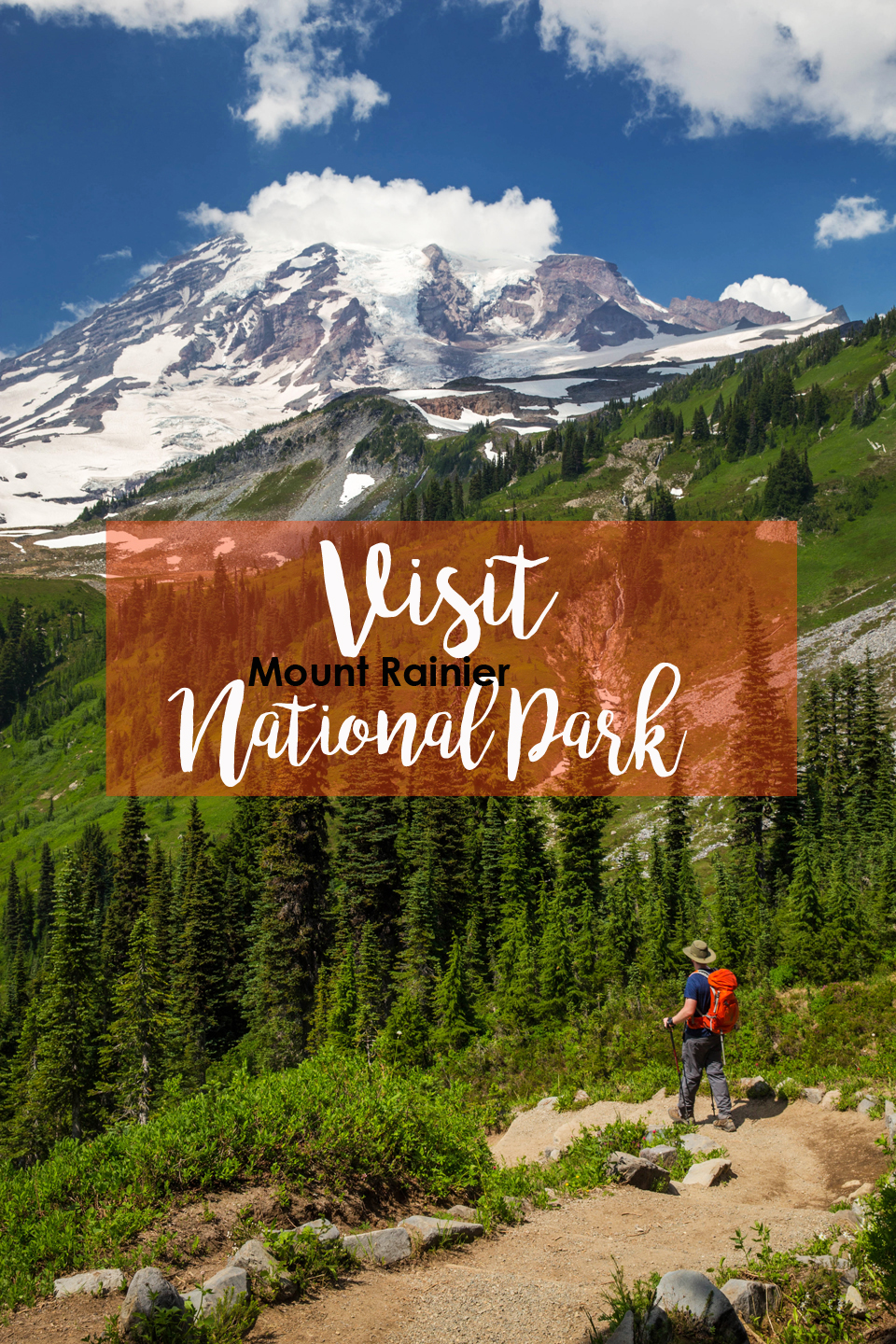