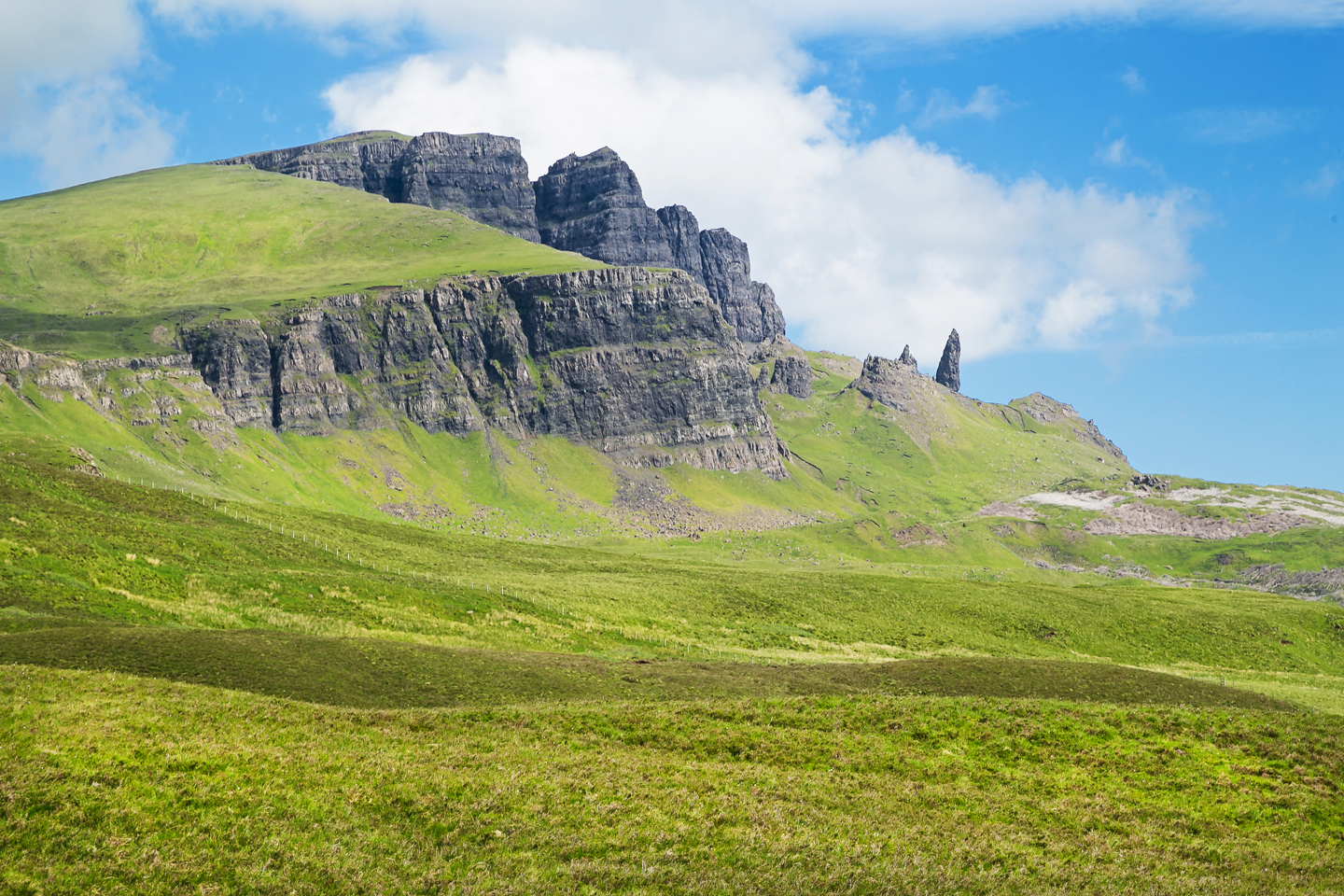 Friday morning we were treated to this beautiful loch view from our Airbnb.  A view which made the prospect of departing for the long upcoming day an even more challenging prospect. Our host had been fantastic and we wished we had opted to stay for more than one night. But after a nice breakfast, we packed up our little car and headed back down the single track road and made our way towards the Isle of Skye. One of the biggest selling points to staying in Kyle of Lochalsh, is the quick and easy access to the Skye Bridge and the Isle. There were hardly any other cars out as we continued our journey onward. Our preliminary destination was the town of Portree, the largest on the Isle of Skye with about 2,500 residents. The drive is about an hour, and if we felt like stopping, the town is known for it’s picturesque and colorful homes on the edge of the water. Similar to our brief time in Inverness, we decided against making a stop in Portree. We were likely going to be coming back the same way, so there was always a chance to stop there on our return. Pushing on, we were rewarded with the beautiful Bride’s Veil waterfall just off the side of the road. You can walk alongside the waterfall, but beware of the marsh-like, soggy ground. If you feel so inclined, you can continue walking for what seems like forever, once you reach the top of the falls. We, along with all of the other tourists decided photos at the falls was plenty for us. Back in the car, we continued along to our next stop on the Isle of Skye, Lealt Falls. There are two waterfalls that can be seen at Lealt Falls. If you have the time, there is a single track trail that leads down to the sea and you can walk closer to the falls themselves. In the interest of time, we only went about halfway before turning back and continuing on. This is definitely a place we would love to come back to and spend some more time exploring. Back in the car, we continued on to more beautiful sites. If you have the time, the road will take you around the Isle of Skye in a very long loop. This is best if you have at least a few days to spend and are staying on Skye. As this was part of a incredibly lengthy day of driving for us, we had no intention of making the full trek. Instead, we stopped for lunch in Uig, a very small port town on the coast. Apparently, there are a number of boating expeditions that take off from Uig, so the town was quite popular given its size. There are a few small places to eat, including a bed and breakfast. Julie and I opted for a place called “The Pub at the Pier” since we can always be swayed by the appeal and ease of a pub. In keeping with theme throughout much of our time in Scotland, the food was just “ok”. No biggie, we were there for the sights and sounds.

Having missed the Quiraing on the way up, we turned back and headed in the direction we came. The scenery did not disappoint. We arrived at Eilean Donan in the afternoon, by which time they had already closed for access to the inside of the castle. Despite the closure, you can still walk the grounds of the castle which can be done quickly. On this day, there was a wedding taking place inside, and guests were starting to arrive in the parking lot. Julie set up shop to take some photos of the exterior and then we walked briefly around the grounds. From what Julie had heard, the inside of the castle has been modernized and doesn’t have the same feel as you might expect. But the exterior was as stunning as the photos we had seen and definitely is worth a visit. Following our stop at Eilean Donan Castle we had made plans to drive through Glen Coe before making our way back to our new hotel for the evening. We still had a long drive ahead, so we pushed on, rather than making any stops before dinner. Fort William was a town we had thought about stopping in, but on the advice of our B&B host, we decided against it. Next time.

We reached the town of Glen Coe around 8:30 p.m. and searched for a place to eat dinner. For some reason, I decided not to get gas at an earlier station, assuming that a mountain resort town would have plenty of options. It didn’t. We pulled in to the single gas station off the main road, but it was already closed. Eating dinner, we discussed the remaining drive ahead, likely several more hours and thoughts on where we might find gas again. The gas light had just come on, so by American car standards, we should have at least 30 miles remaining. Our little Toyota made proven to be great with mileage, so I wasn’t concerned. We were going to find a place to stop.

After dinner, we hit the road again, passing two small towns along the way. One town, if you can even call it that, had a gas station that was closed, while the other had nothing but a pub. With the sun starting to go down, despite our lack of gas, we pulled over to take in the unbelievable views. Glen Coe is absolutely stunning. Standing at the turnout, I was overcome with a strong desire to hike into the mountains and explore even more. Unfortunately, time and a serious lack of gas were not in our favor. We reluctantly jumped back in the car and started back on the road again in search of a gas station that might still be open at this late hour. Multiple times as we continued on, we had to resist the urge to pull over again for additional sunset photos. At around 10:10 p.m. we came into another small village, this time WITH a gas station and other cars! This was great news! I quickly pulled over and filled up our tank. It definitely seemed strange to us that you fill your tank first and then pay inside the station afterwards. No complaints here though, as we were just about 30 miles in from the empty light coming on. Walking in to the station to pay, Julie headed to the bathroom while I grabbed us a couple more bottles of water for the lengthy drive to our hotel. I noticed immediately that all of the lights in the station save for the one at the front register had been turned off. I figured that they were either closing soon or just wanted to use less electricity at the later stages of the night. It’s fairly common back home for a gas station to be minimally staffed late in the evening. As I paid for the gas and waters, my conversation with the attendant went something like this:

Me: Are you guys closing soon?

My guess was that the several cars and motorcycles that were just finishing up as we pulled in had probably kept the station open a bit longer than they had planned for. Good for us, but not so good if you’re trying to close down for the evening. As I headed to the front door, a second clerk followed closely behind me, ready to close the door behind me. I quickly made her aware that I was waiting for my girlfriend who was in the bathroom. When Julie came out, I signaled to her to speed up so we could get out and let them close down for the evening, mentioning that they should have already been closed when we got there. To say that we were beyond lucky is an understatement. I don’t think that we saw another gas station, let alone one that was open, for at least another hour. We without question, SHOULD have run out of gas that night. We were extraordinarily fortunate that the station was still open. Lesson learned: when you are running low on gas and also driving in a foreign country, just get gas when it’s available. It took us another 2.5 hours to get back to the city and our new hotel for the next two nights. By the time we checked in we were road weary and ready for a shower and bed. A group at the hotel was having a wedding that night, so the hotel was busy and crowded. We shuffled through the crowds of people and up to our room.

A long day of adventure had come to an end. We were exhausted but filled with joy for all that we were able to experience on such a long journey. Three days in, and thirteen more to go; we were excited for our next adventure.