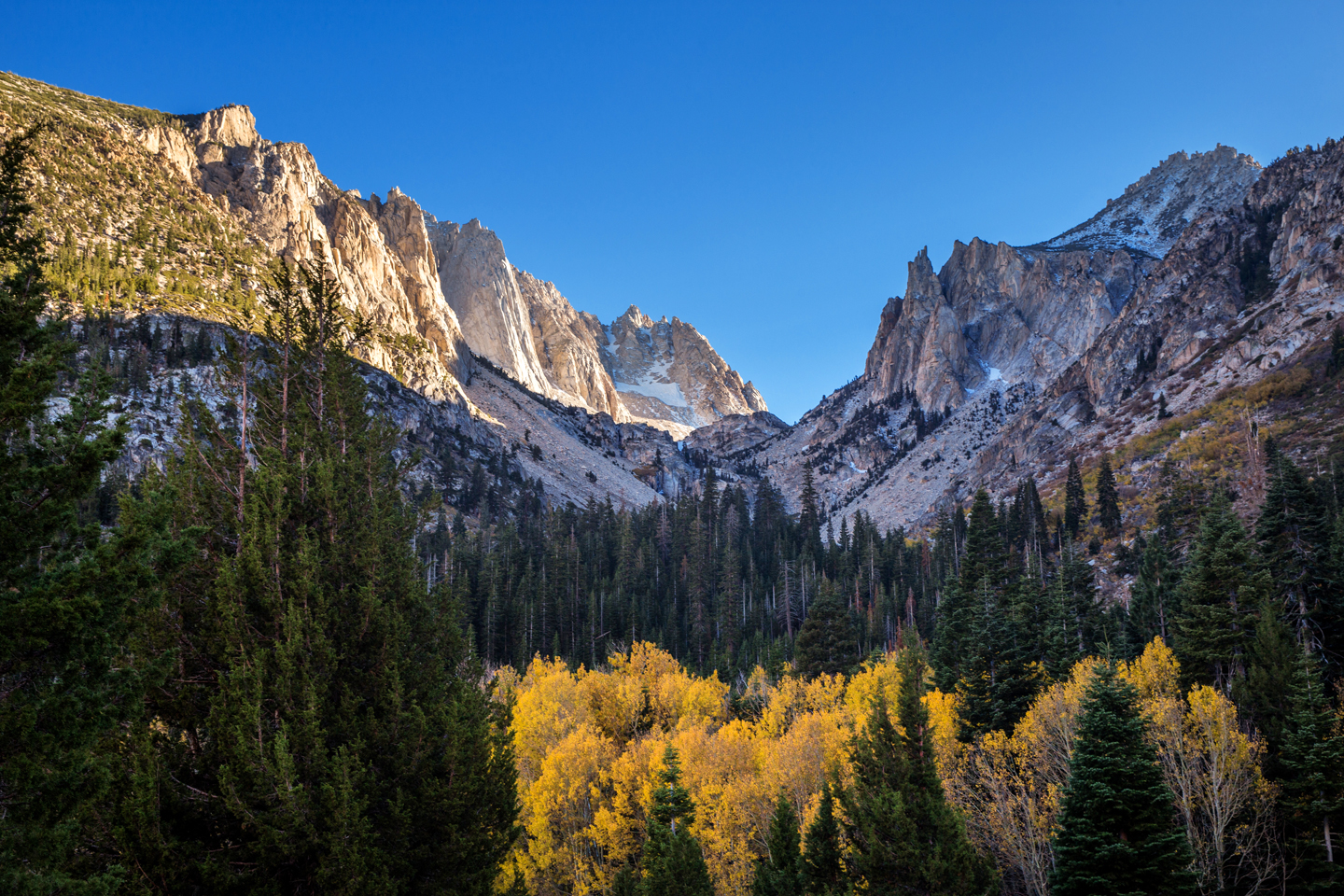 I first fell in love with Quaking Aspen trees when my family and I visited the Eastern Sierra in October of 2009. The trees burst into vibrant amber hues all around the June Lake Loop. On a hike, we walked through groves of golden leaves that danced and hummed their namesake tune. I felt as if I was in a fairytale.

In 2016, I was able to coax Brian into taking a spontaneous 48-hour trip to see the colors in Bishop, Mammoth, and June Lake, and I think the experience hooked him as well. Even though most of the trees were past peak color, it was still a spellbinding weekend. This year we decided to explore a different region of the Sierras, so we made Twin Lakes in Bridgeport our home base. It was nice to be in a less popular area, and to venture into the nooks and crannies of a part of the Sierras I had only seen from the distance as I sped up Highway 395 to other destinations.

We arrived in Twin Lakes in the late morning after taking a pre-dawn drive from San Jose over the Sonora Pass. Since we intended to do a fairly substantial hike that day up to Barney Lake, and since the campgrounds were virtually empty, we decided to head straight to the trail and set up our tent when we returned. The trail to Barney Lake takes hikers four miles up Robinson Creek on a gradual ascent. The last mile switchbacks through lush aspen groves before the trail finally meets the sandy northern shore of Barney Lake. The entire hike we were surrounded by stunning views of the granite peaks of the Sierras. Since the trail is just outside the Yosemite National Park boundary, there were lots of pups on this hike, which for dog lovers like us, was a huge bonus! I was ecstatic to photograph Barney Lake until I got there. The mountains are to the south of the lake, so for most of the day lighting will be absolutely terrible as you will be shooting directly into the sun. This is definitely a sunrise destination for photography, so if you are planning on shooting the scene, begin your hike early! After eating our lunches, and resting a bit, we headed back the way we came. As the sun began to set, I traipsed and captured images of the shadows contrasting with the afternoon light. Bradley Lake was a prefect hike for capturing Fall colors. It was definitely a mistake not to set up our tent before the hike. By the time we returned to the trailhead it was dusk, and we were exhausted. We sat for a few costly minutes entertaining the idea of seeing if any nearby motels had rooms available, but decided to toughen-up and head to the campgrounds. By the time we arrived at our site, it was cold and dark. We began to rethink our decision. The campground manager came by and warned us that it was supposed to get down to 17-degrees that night.

At this point, we had all but abandoned our plan to camp. My sleeping bag was not rated for below 32 degrees. I had monitored the weather leading up to the trip, and it was not projected to be so cold. We decided to drive over to the general store where there was a wifi signal to inquire about hotel rooms. No luck. The colors were at peak, so everywhere was booked solid. Our last idea was to drive into Bridgeport and ask about last minute cancellations in person. No luck again.

I felt extremely disheartened. A cold, uncomfortable night lay ahead of us. Brian was nothing but positive though, and he believed we could endure the adventure. We decided to forego trying to build a fire and cook as the evening was progressing, and instead popped into a local dive bar for burgers and beer. The fuel lightened our spirits, and then we were then off to our chilly campsite. Of course, setting up the tent in the dark was a Comedy of Errors. And drinking two beers meant having to leave the confines of our cold tent for the absolutely frigid air to relieve ourselves more than once. After a virtually sleepless night, Brian finally informed me that it was late enough in the morning to get up, so we packed our frost-covered car and set out for some sunrise photos at Lower Twin Lake. We took the Tioga Pass home for the change of scenery and the opportunity to drive through Yosemite National Park. Before heading up the pass, we stopped at the Whoa Nellie Deli inside the Mobile Station at its base. As a general rule, I avoid eating gas station food, but this place is an exception. It’s probably the best food you’ll get along the 395 (save for Erik Schatt’s in Bishop). We grabbed coffee and breakfast burritos, and laughed about our adventurous night. While we were very under-prepared for the weather, and made some bad decisions early in the day, it made our fall colors trip much more colorful.

Were are your favorite places to see fall colors in the Sierras? Let us know in the comments below.

Chasing the Last of the Fall Colors in the Eastern Sierras 1 thought on “A Colorful Trip | Fall Colors in Twin Lakes”