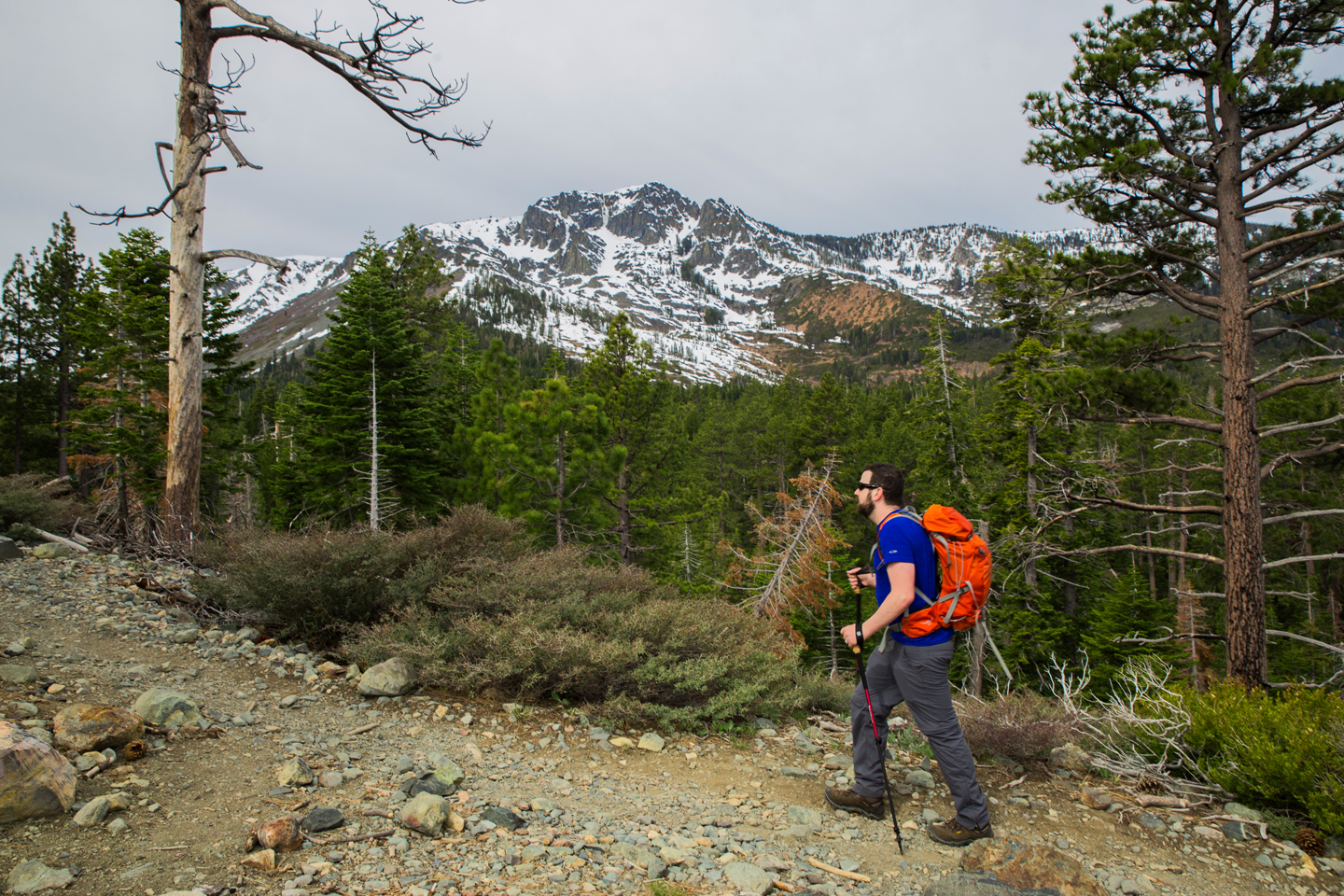 When we arrived in Lake Tahoe, I gazed at the snowy peaks and knew immediately that our plan for hiking Mt. Tallac would have to be saved for another trip. The snow level seemed pretty low, and since it was spring there were bound to be unstable conditions along the trail and avalanche danger.

However, there was a sparkly twinkle of adventure in Brian’s eye, and I knew he was determined to attempt the hike. After some debate, we decided to hike along the trail for as long as it was safe. In my mind, I knew that meant we would probably only make it to Cathedral Lake, which was okay with me since the trail up until that point was supposed to be scenic, and it would still give us a pretty decent workout for the day. So, on a cloudy Saturday morning, we packed up our gear, and set out for an adventure along the Mt. Tallac Trail; each of us with different goals in mind.

Brian and I arrived at the trailhead around 9:00 a.m. only to find the gate to the access road was closed. There were about four or five other cars parked just outside the gate, so we joined them, threw on our boots, and set out. A half-mile later, we arrived at the official trailhead, bemoaned how we wish would could have driven the distance and parked there, and then we began the climb. 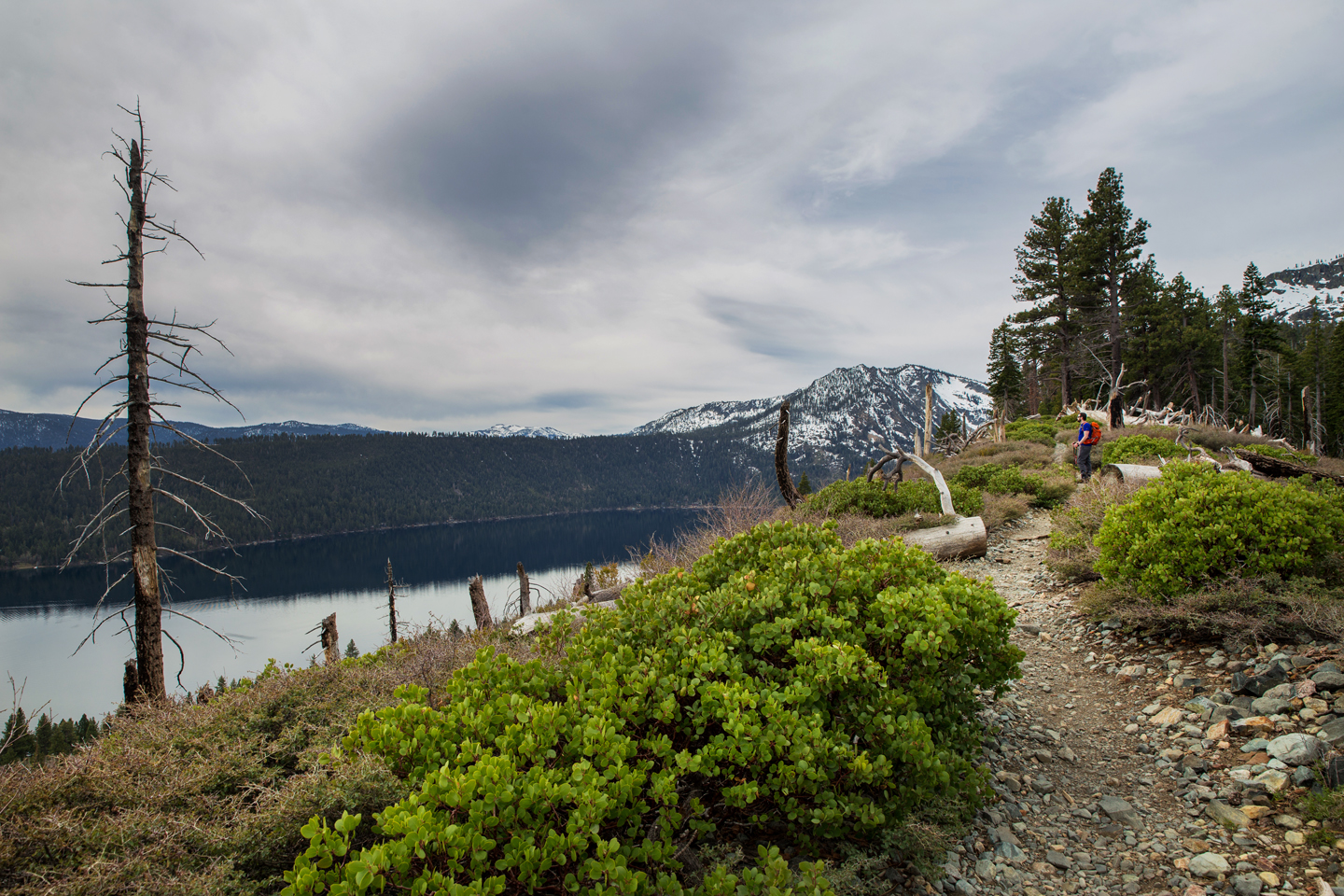 Beyond the initial ascent, the trail flattens out and follows a ridge above Fallen Leaf Lake. The views at this point were stunning, as the lake sparkled below in the soft morning light, and above we could see our (sort of) goal; the jagged, snowy peak of Mt. Tallac. After stopping a few times to admire the view and capture it in a few pictures, Brian and I continued on through a section of trail that turned away from the ridgeline, and meandered through a pine forest. Throughout this section, the sound of water began sweeping through the air, and we knew our first marker would arrive soon: Floating Island Lake. 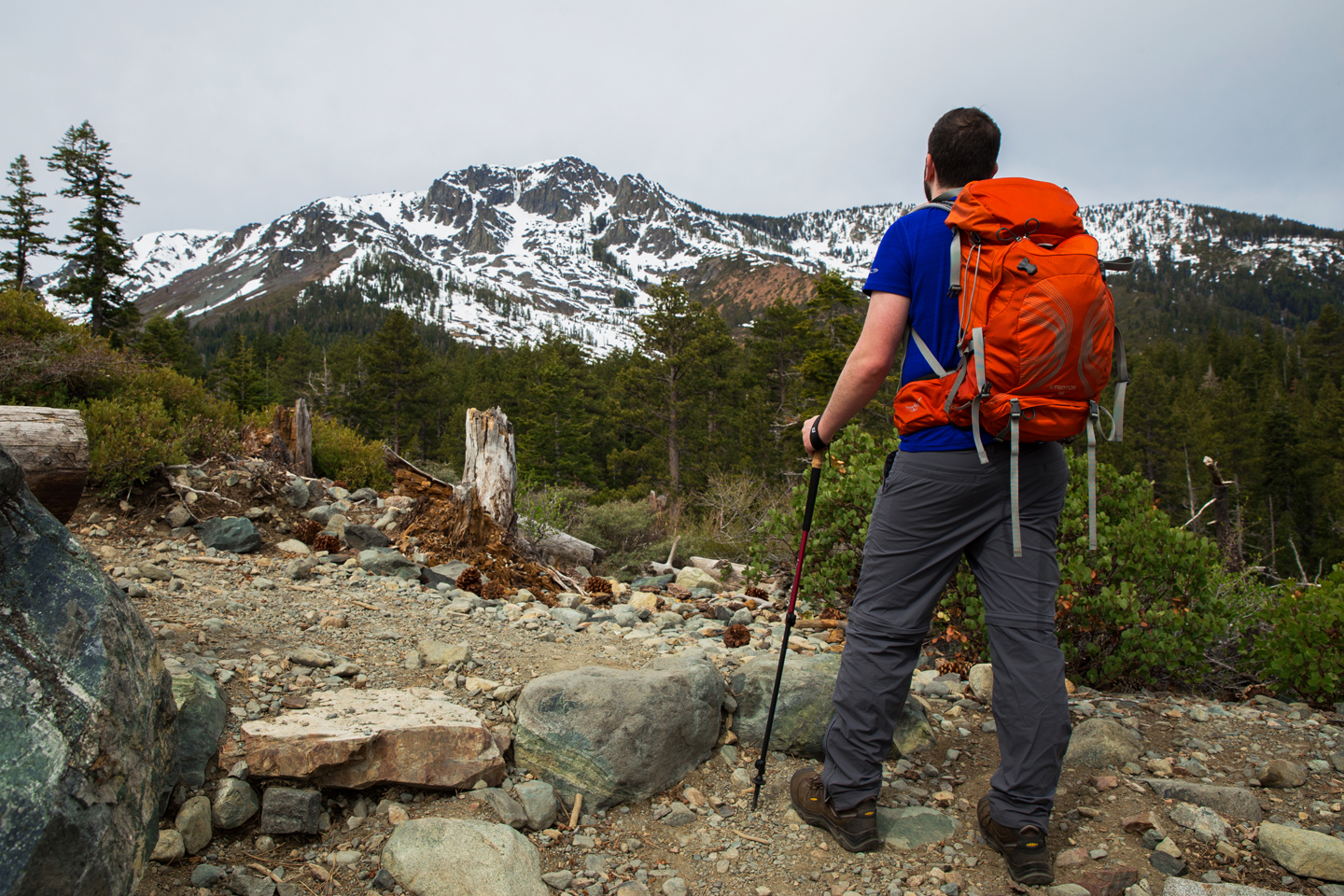 When we arrived at the lake, my initial thoughts went to how poorly the water feature was named. It is tiny, and is truly more of a pond than a lake. Also, there was no island. Great job lake-naming person! 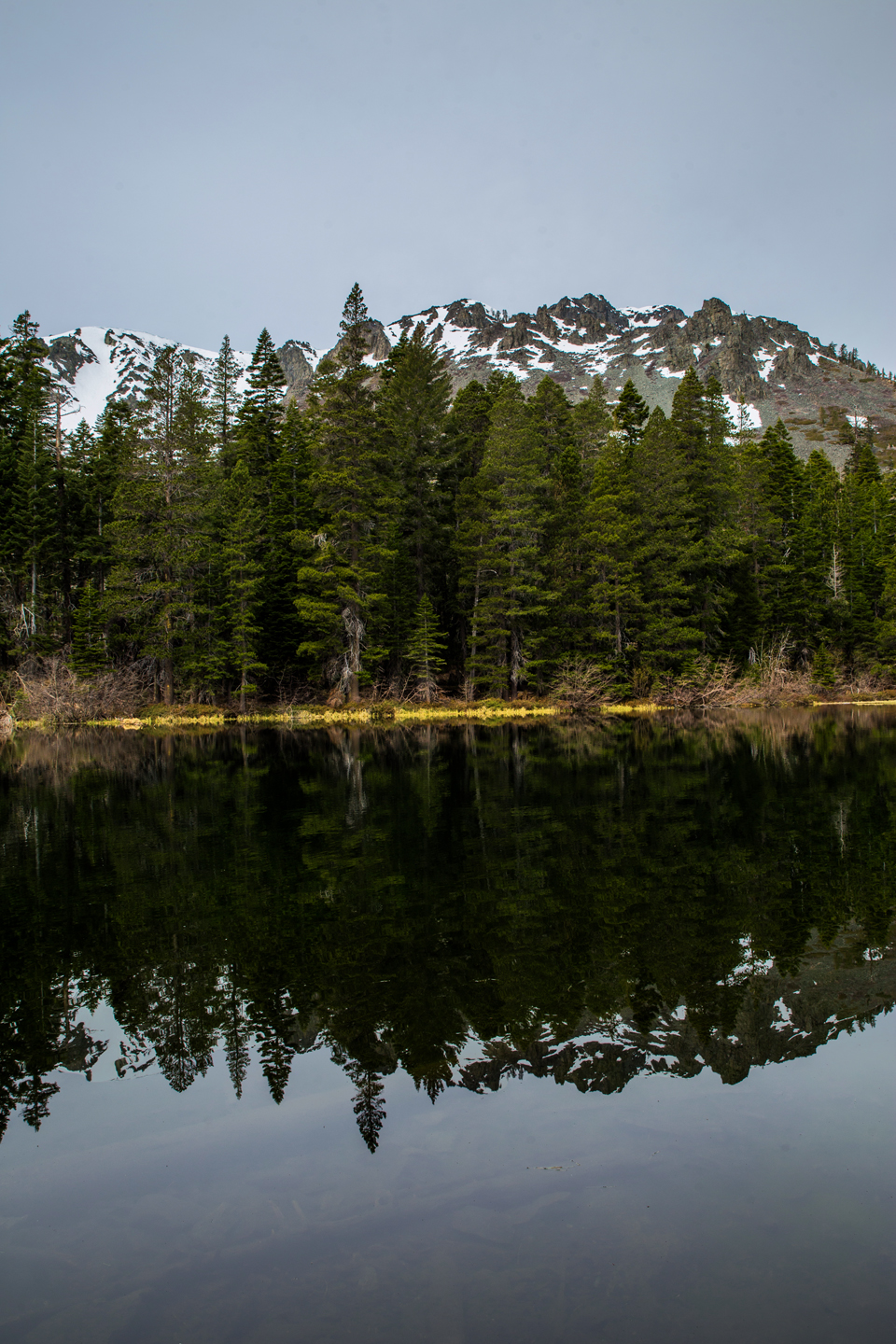 The two of us continued our journey, and as the trail began gradually climbing, it also became more snow-covered. We brought our micro-spikes, but the trail was flat and the snow was mushy, so we did not think wearing them would benefit us much at that point. 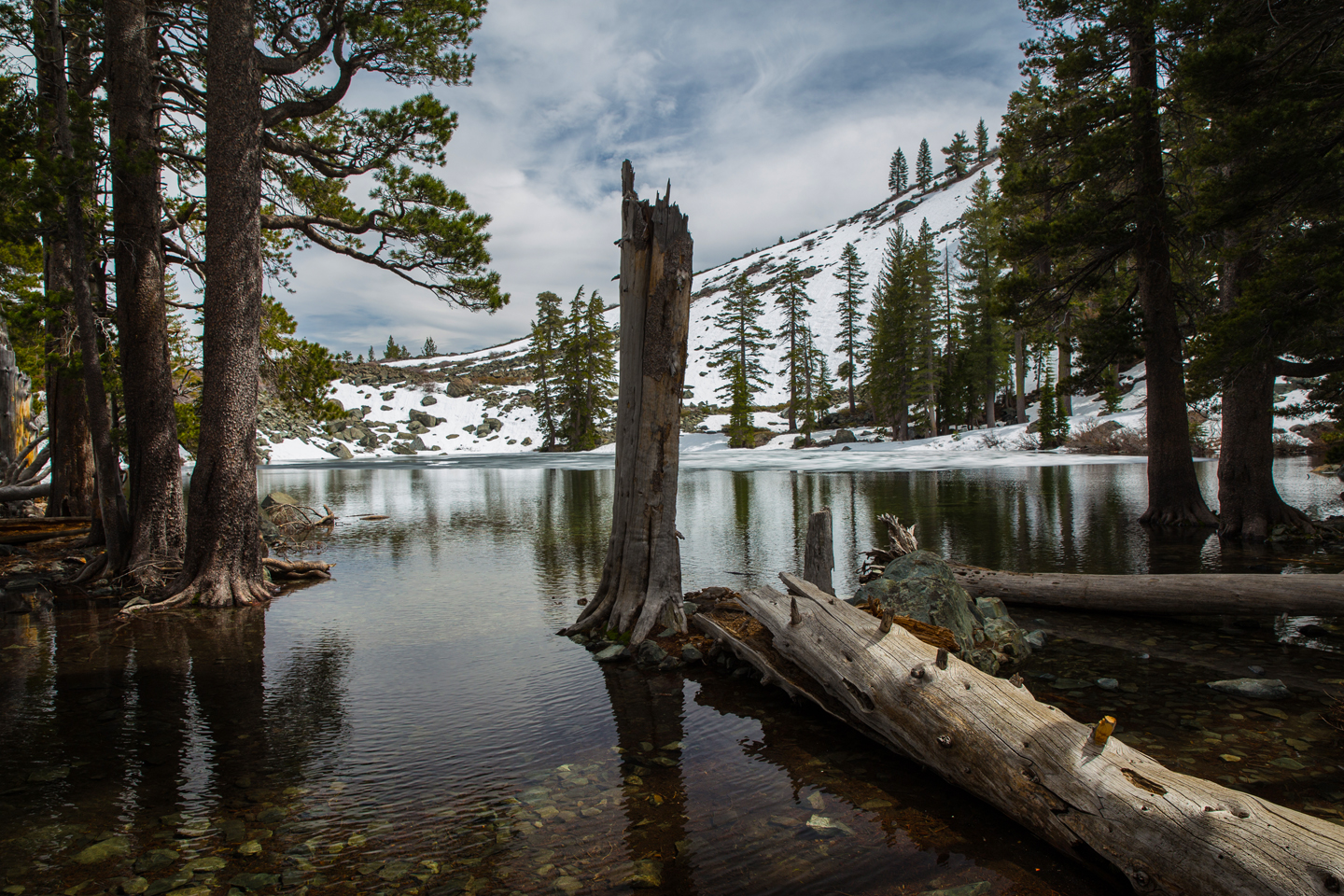 Along the shores of Cathedral Lake, another pond-like water feature, we met the first return hiker, and chatted with him about the conditions beyond the lake. I thought this would be our turning around point, but he assured us that while the rest of the trail was covered in snow, it was manageable to pass. Brian and I decided to give it a go, and continued on toward the summit. 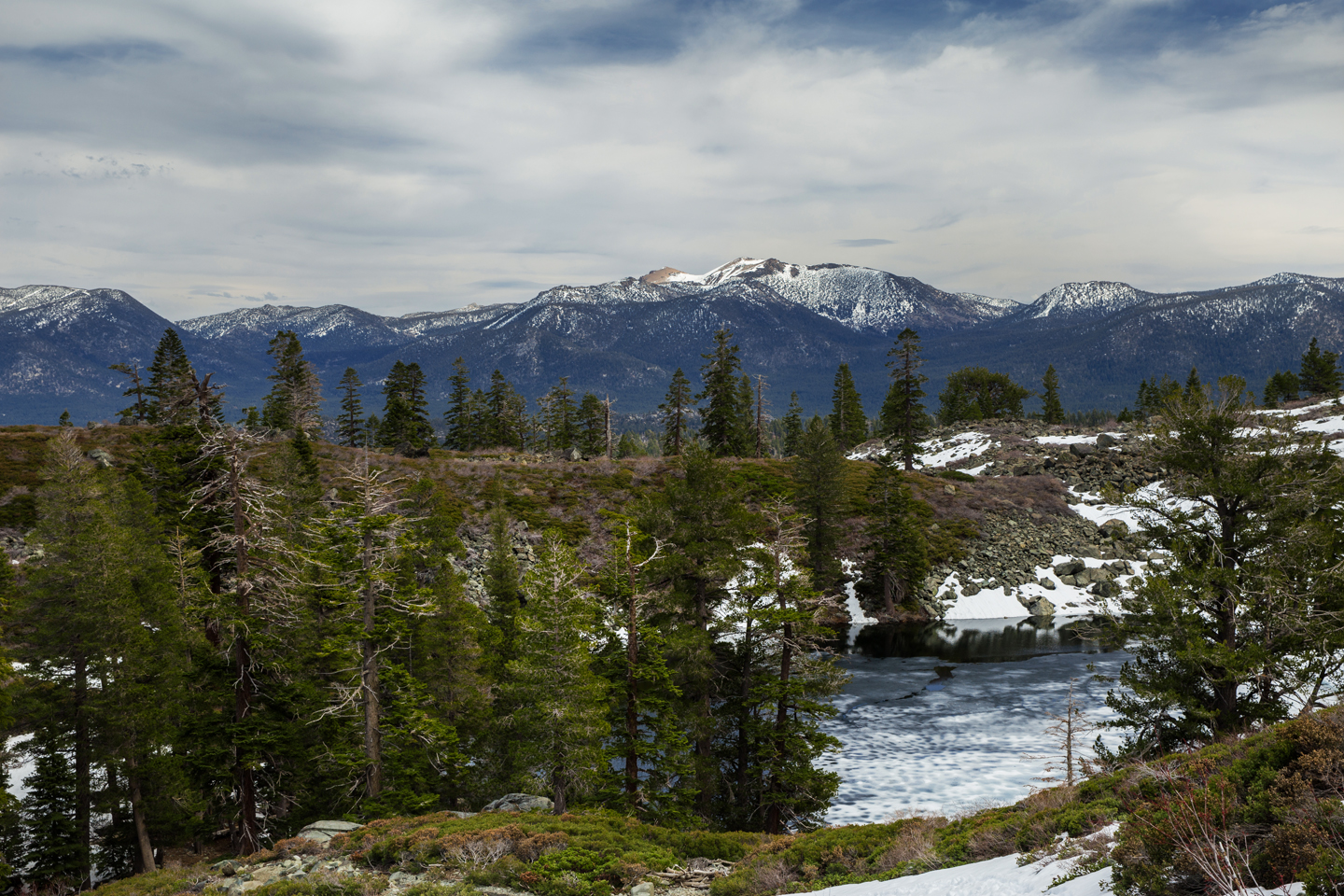 At this point the trail began to climb, so we threw on our micro-spikes for some extra traction. While we paused, another group caught up to us, which we were thankful for since two in their number had summited the peak in the past. After a short conversation, we all continued up the slushy slope until the trail flattened out along the base of a bowl-like feature on the mountain.

Our new companions pointed out that where the trail runs in summer is through a few switchbacks up the bowl. However, the trail was still hidden under a blanket of snow – a steep blanket of snow, which resembled a double-black-diamond ski run. A less treacherous route seemed to be to scamper up a rocky face to the side of the snow, and then cut over to the backside of the bowl, and pick up the trail again. 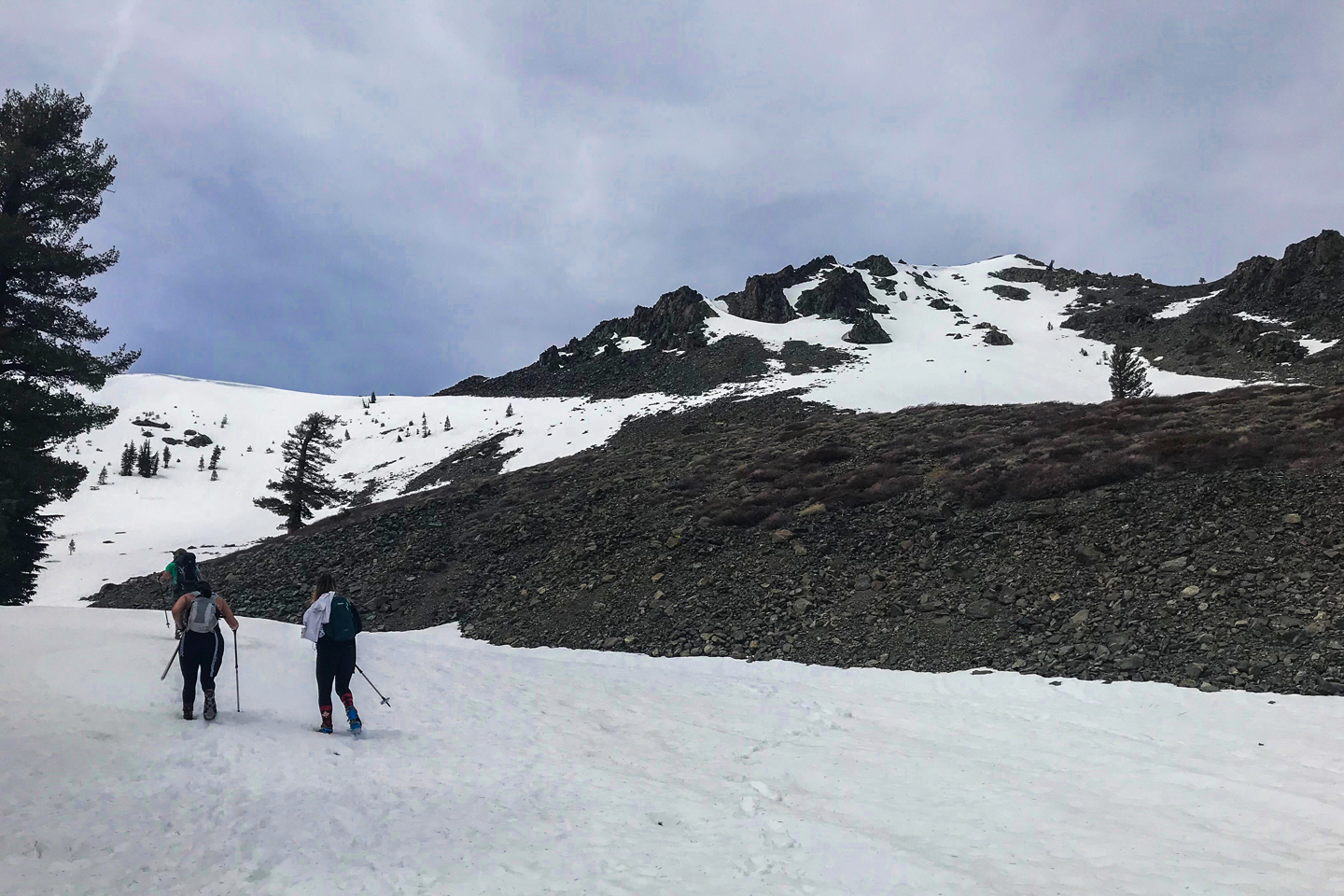 The three who we were following did not hesitate at this point, and quickly scurried up a slope of unstable boulders and scree. Brian and I began to follow, and with each step a feeling of dread in my gut began to worsen. It was tough to climb up the rocks, and I couldn’t stop thinking about how much worse it would be to scamper down them, especially with bad knees. We stopped and chatted for a bit. I cried. I didn’t want to give up so close to the top, but something inside of me was screaming that it was no longer safe to keep going. 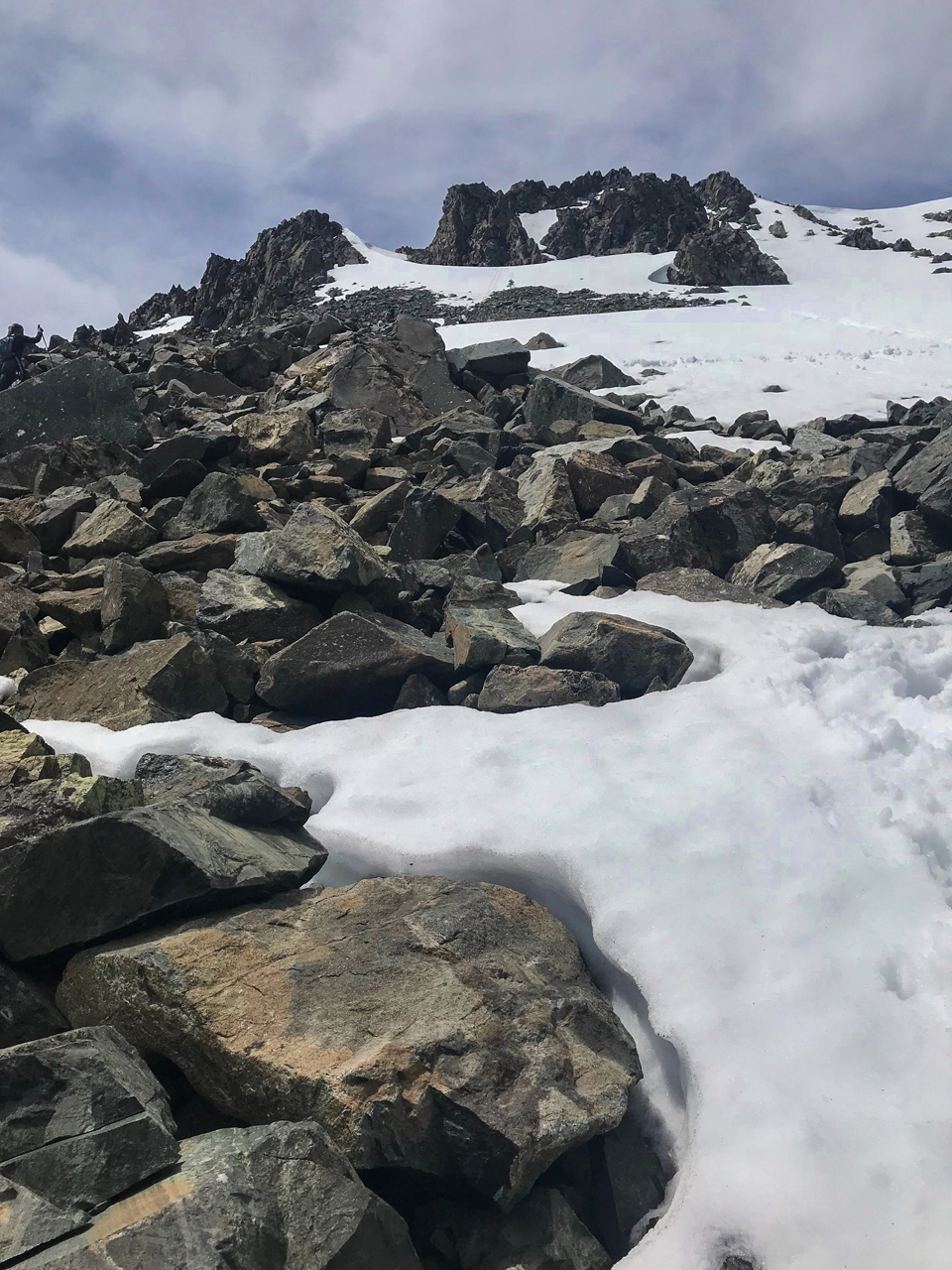 Maybe it was fear, maybe it was intuition, maybe it was exhaustion, or maybe a little bit of each. I tried to suppress the feeling, and we continued on for a few more minutes. I stopped again, and looked up and down. We were in the middle of no-man’s-land, on the edge of a mountain. We had come so far, but the top is only the halfway point. We still had much further to go. My body was not ready to climb another mile over the rocks, nor back down them. My mind was not ready to give up though, especially because I didn’t want to disappoint Brian. But he understood. He supported my gut feeling, and after careful consideration, we decided to descend. The mountain will always be here, he said, so we could always come back and try again. 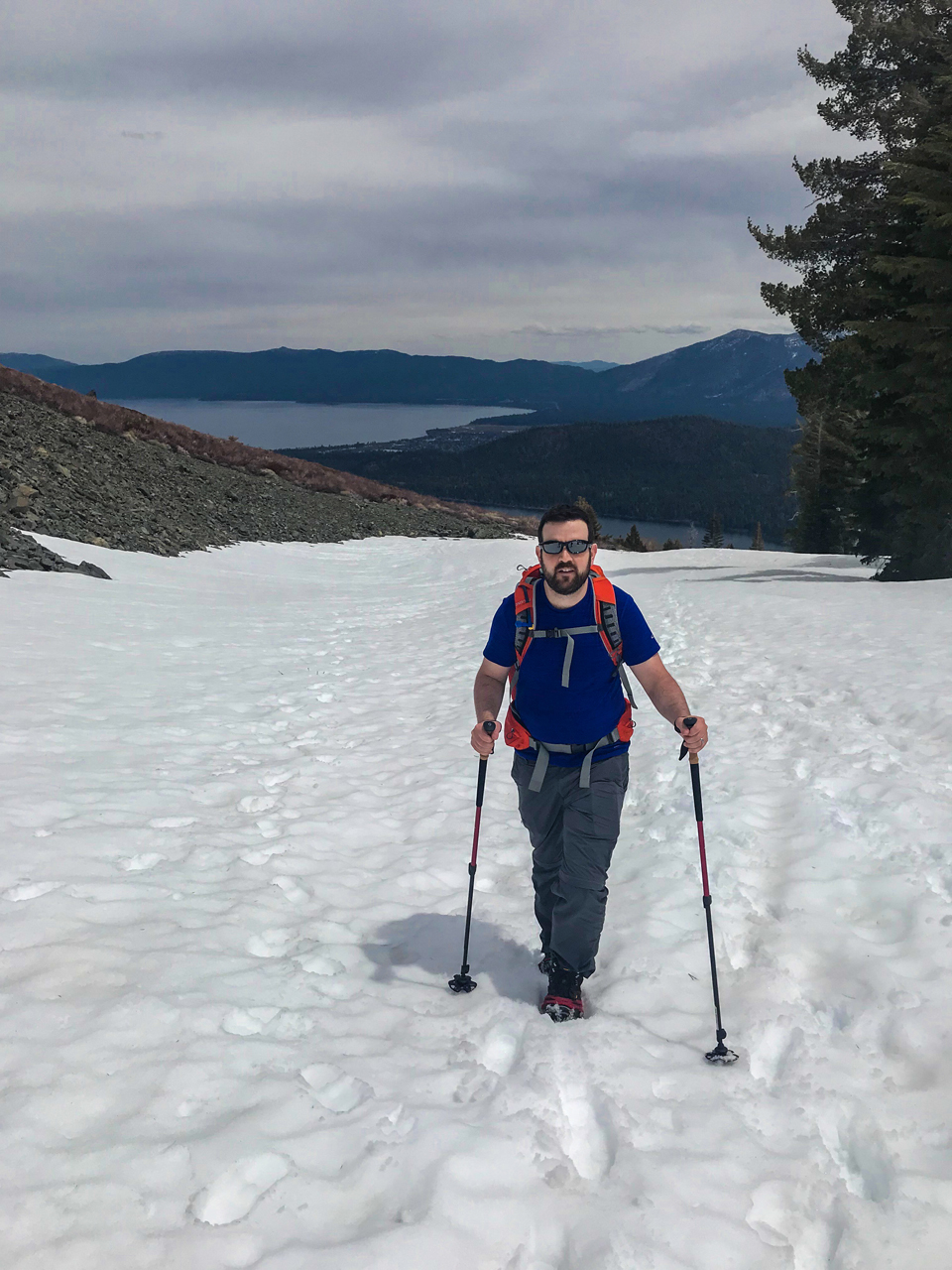 Soon after we turned around, a group of rowdy teenagers approached the top of the bowl and took turns sliding down the ski-slope-like face. They made it look like a piece of cake. One even turned to us and shouted, “It’s worth going to the top just so you can do that!”

I was met with instant regret. Did we make the wrong decision? Probably, but the decision was made, so we continued in our direction.

Inspired by their enthusiasm, we picked up our speed going down the slushy slope. It lightened my heart a bit as we ran through the knee-deep drifts. It also gave me pause when I realized that it really wasn’t that steep, and maybe the teenagers weren’t so crazy after all. Maybe we should have climbed up the snow instead of attempting the rocks? Maybe. 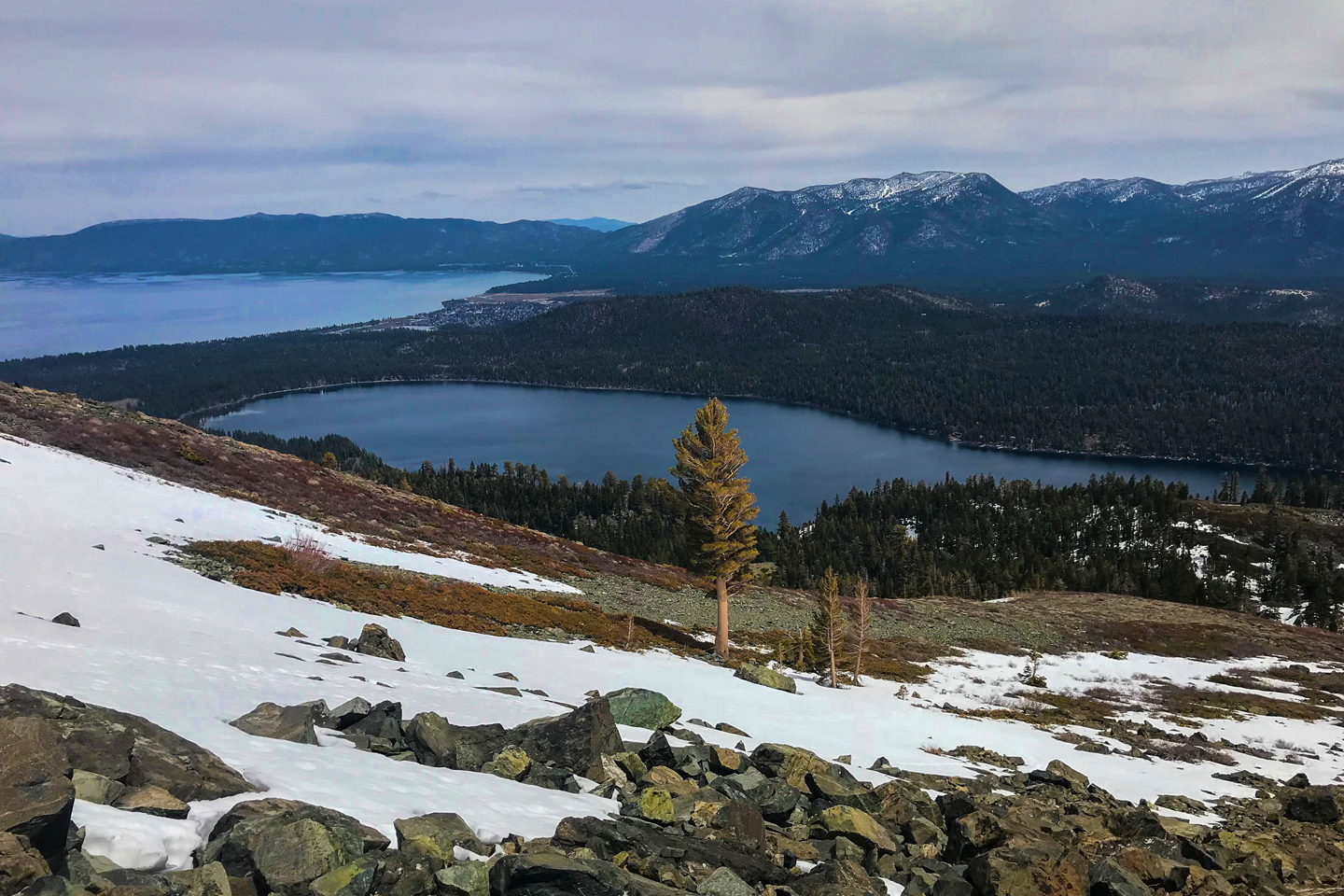 As we approached Cathedral Lake we encountered the usual crowd of unprepared, casual hikers sporting jeans, tennis shoes, and one small bottle of water for two people. A few asked us about our journey, and we advised them to turn around, but they kept going.

With grumbling stomachs, we stopped at a vista just above Cathedral Lake, and enjoyed a few turkey, salami, and white cheddar cheese sandwiches on wheat – our usual. The rest of the way seemed to take forever, but eventually we made it to the car. I hate how the descent always seems never-ending.

As Brian and I sat on the back of Mystique, the name he gave to his electric blue Mazda, we untied our boots and relished the freedom our tired, wet feet felt as we peeled off our damp socks, and threw on flip-flops.

As I opened the car door, I paused to look up at Mt. Tallac one last time. I always have this odd sense of wonder when I finish a hike and take a moment to look at the peak I summited. It is strange to imagine that I stood so far away, so high above where I am standing now, just a few hours prior. It always seems like a lifetime ago, or like it was an impossible feat that average-me could never accomplish. However, I did it, and so did the others who where up there today. Staring up at Mt. Tallac in that moment was no different, we made it fairly far, and I could just make out the brown patch of rocks that we stood on as we made our decision to turn around. Our own personal summit for the day. However, the true, sublime summit of Mt. Tallac still taunted me. We’ll be back. 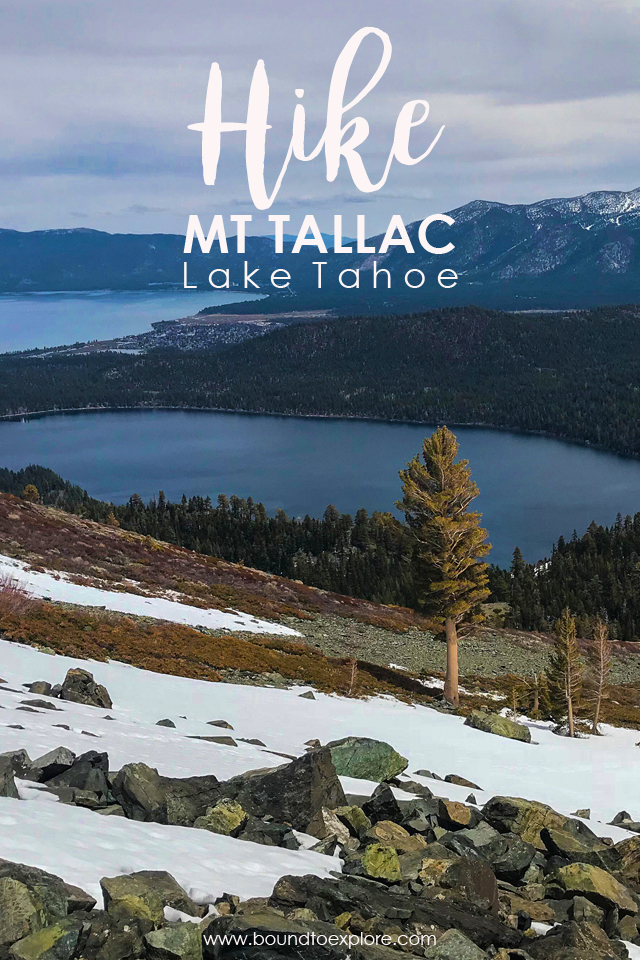 Washington did not disappoint!

Over Labor Day weekend, we had plans to backpack in the Eastern Sierra. A preventative fire closure meant we needed to improvise our plans with about a week to spare. On a whim, I suggested to Julie that we fly to Washington and explore some of the northwest. After some discussion, we booked our flight, hotels and with an assist from a friend, a car.

Seeing a familiar sight from a different perspective.

After a week that somehow felt just as long, even with the holiday, we needed some mountain therapy. Our hope was to secure Half Dome permits for Julie’s birthday weekend via the daily lottery. After striking out on that, we decided to make the most of our time in Yosemite. We had two nights booked in the Valley and promptly spent both of our days hiking off Tioga Pass. It’s hard to beat the nearly 20 degree temperature difference and this view turned about to be a pretty okay consolation prize.
•
•
•
•
📷: Brian
#unlimitedcalifornia #yosemite #nationalparkgeek #yosemitenationalpark #gotocalifornia #california #VisitCalifornia #hikingaddict #viewsfromcalifornia #sierranevada #naturalcalifornia #wildcalifornia #liveyouradventure #adventureculture #modernhiker #hikingculture #hikingadventures #forceofnature #goatworthy #caliexplored #wildtribute #ourwild #outside_project #sharetheexperience #usinterior #keepitwild #optoutside

“Old Lakes, because that’s how you feel when you hike there 🤣” – Julie

The sea-level to about 9-10k feet in the same day always makes for a challenging hike. And this one, which came with long slogs through mostly unspectacular scenery, probably didn’t help boost our energy. But when we finally made it to our campsite for the night, all of those struggles from earlier in the day seemed to fade away. It’s what keeps us coming back, again and again.
•
•
•
•
📷: Julie
#unlimitedcalifornia #yosemite #nationalparkgeek #yosemitenationalpark #gotocalifornia #california #VisitCalifornia #hikingaddict #viewsfromcalifornia #sierranevada #naturalcalifornia #wildcalifornia #liveyouradventure #adventureculture #modernhiker #hikingculture #hikingadventures #forceofnature #goatworthy #caliexplored #wildtribute #ourwild #outside_project #sharetheexperience #usinterior #keepitwild #optoutside

This hike has been on our list for about the last 5 years or so. We booked permits, made plans, and it didn’t happen. Year after year, it always seemed like something came up that prevented us from following through. Two years ago, there was too much snow for our early summer trip, so we cancelled. Last year, we made it to one lake, only to have to bail out due to a combination of altitude sickness and a little something called the Creek Fire.

Eagerly anticipating our next adventure!

We have a lot of hikes planned for the summer, but since we didn’t win any lotteries and only have one backpacking permit, many of these trips will be last minute.

On this day, we decided the night before that we would drive out to the park for the day from the Bay Area, hike, and then head home. These short adventures are one of the ways we make the most of our weekends.