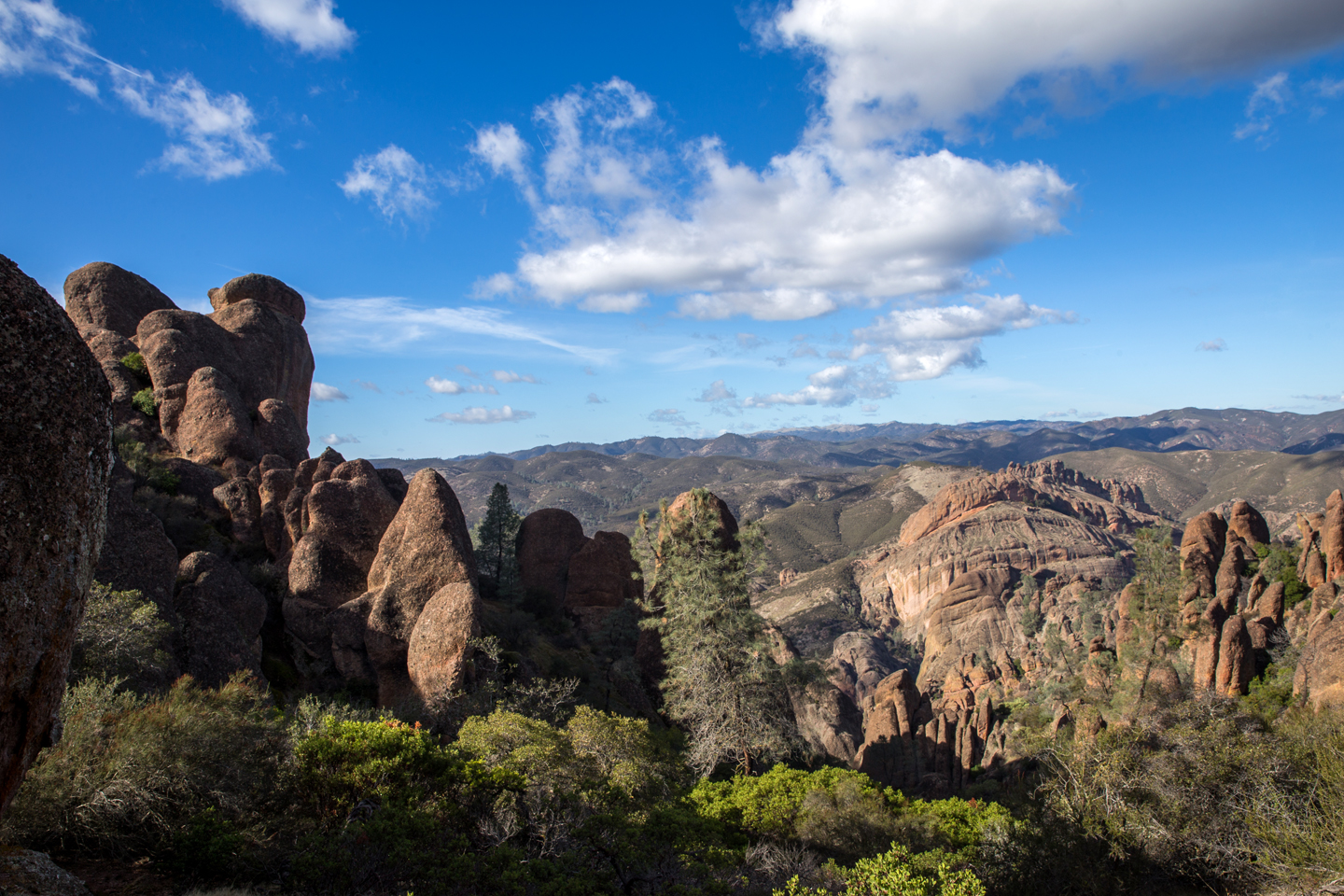 I’ll be the first to admit that I wasn’t excited about visiting Pinnacles National Park.

Before meeting Julie, I hadn’t heard much about the park, which had previously been a National Monument before receiving National Park status in 2013. And what I had seen in the research we had done as we planned for our trip: rock formations, hills, a reservoir, caves, didn’t pique my interest in the same way as some of the other National Parks do. For the record, I love visiting the parks and have a goal to visit all fifty-nine, but I am more inclined to high peaks and alpine lakes than desert landscapes.

Perhaps then, one of the best things about being outdoors is the ability for nature, and our parks, to completely flip those preconceptions upside down. After visiting Pinnacles, I can safely say that the park is an underrated gem, and that is definitely saying something when you consider we have nine National Parks in California! 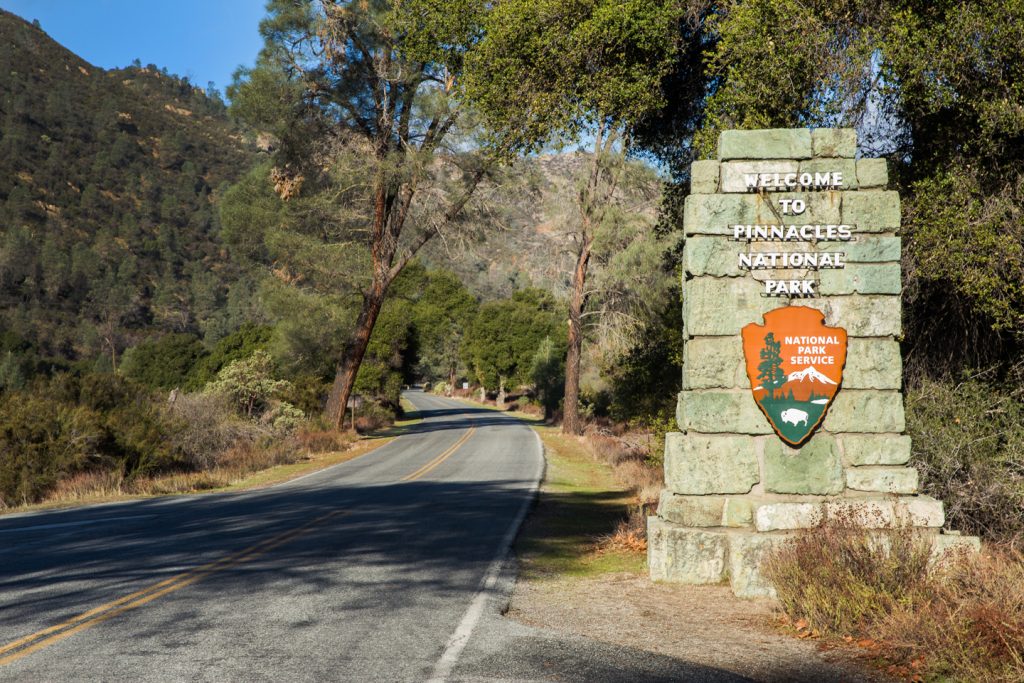 Pinnacles National Park is the youngest of our fifty-nine parks, established in 2013 by President Obama. Located just an hour and half south of the Bay Area, the park is split into two sections: east and west, making it an easy day trip.

Oddly enough, the two sections of the park do not connect by road, but you can hike between them which makes for a longer day, though still manageable. For our visit, we opted to visit the east entrance to the park with plans to head back to the west side soon. 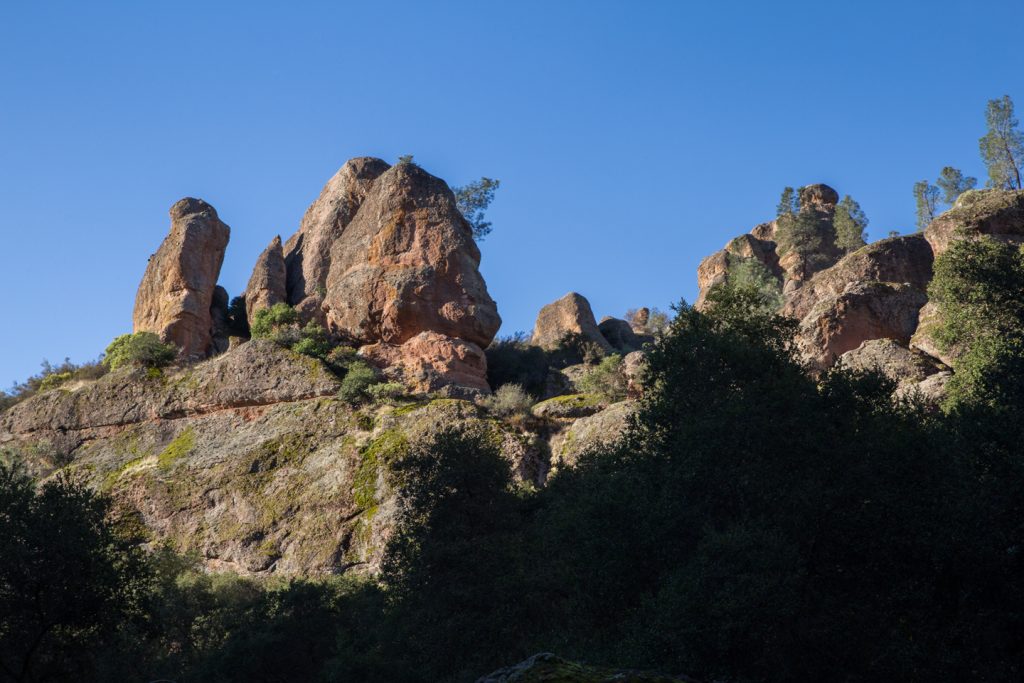 To access the park’s east entrance from the South Bay, take Highway 101 South to the  CA 25 South towards Hollister. Once you pass Hollister, the road narrows to just two lanes, but the rolling green hills (in winter, of course) make the drive easy on the eyes.

It’s important to note that Hollister is the last major town before you reach the entrance to the park. Aside from a small off-brand gas station just past Hollister, you won’t find any others as you continue the drive to Pinnacles, so be sure you are able to make the 60 mile roundtrip journey without needing to stop. While there a few slight curves, the road is otherwise very easy to drive and makes for a quick trip. A sign for CA 146 West towards Pinnacles means you’re just a short drive from the park’s Visitor’s Center. 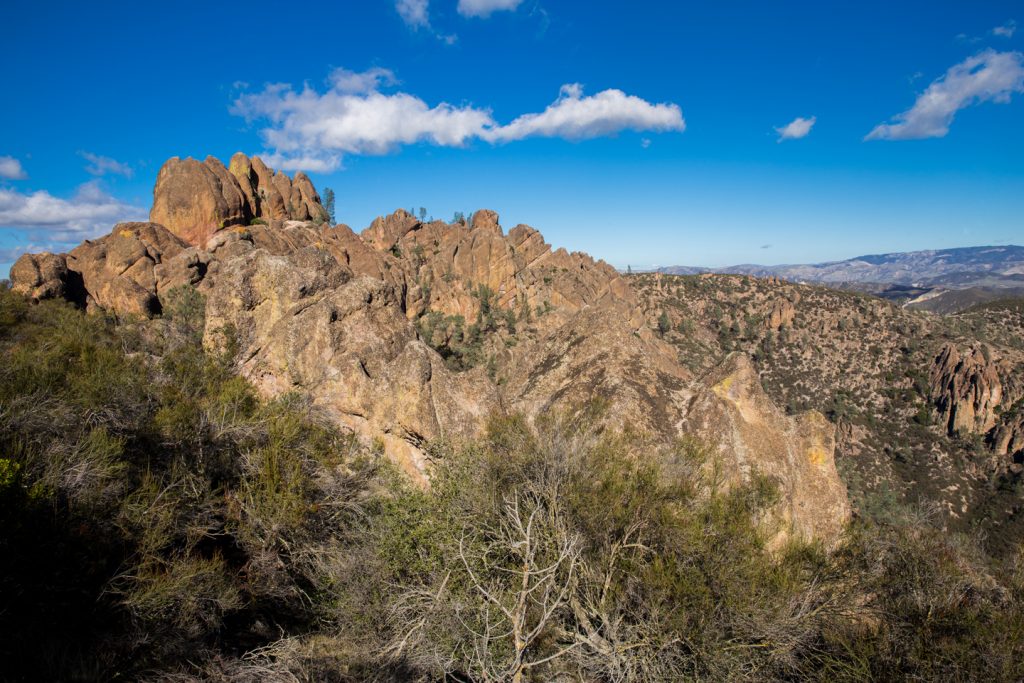 We visited on the first day of the 2018 government shut down and were incredibly disappointed to find the Visitor’s Center closed so we couldn’t get a stamp for our passport! The Visitor’s Center is probably one of the smallest we’ve seen to date, and that includes the temporary trailer at Olympic National Park. While the Visitor’s Center was closed, the other half of the building is shared by a small shop that sells snacks and beverages for the adjacent campsite, which was open.

Inside the store, we were maybe 50 feet from the park stamp, but a stanchion restricted our access and we didn’t feel like breaking the rules in front of the store staff. Bathrooms are located in a small, standalone building behind the store, and include running water and flush toilets.

After leaving the Visitor’s Center, the drive to the trailhead parking lot is three miles. If you enjoy taking photos of the park sign like we do, you’ll have an opportunity to do so shortly after entering the park.

For the hike to the Bear Gulch Caves and Reservoir, there are two parking lots options. We opted to park at the second lot, which only has about ten spots and is closer to the start of the trail leading to the caves. However, if you plan to do the entire hike as a loop like we did, we advise you to park at the first lot, which is about a half mile back and has more parking spots. This way you don’t have to walk an extra mile uphill to get back to your car at the conclusion of the hike.

During peak season for the park, it is very likely that both lots will be full, early. As with most hikes, we strongly suggest arriving to the trailhead as early as you can manage. Arriving at the trailhead by 9:30 a.m., there were still a few spots available at the second lot, and plenty at the first. When we returned in the early afternoon, both lots were full. 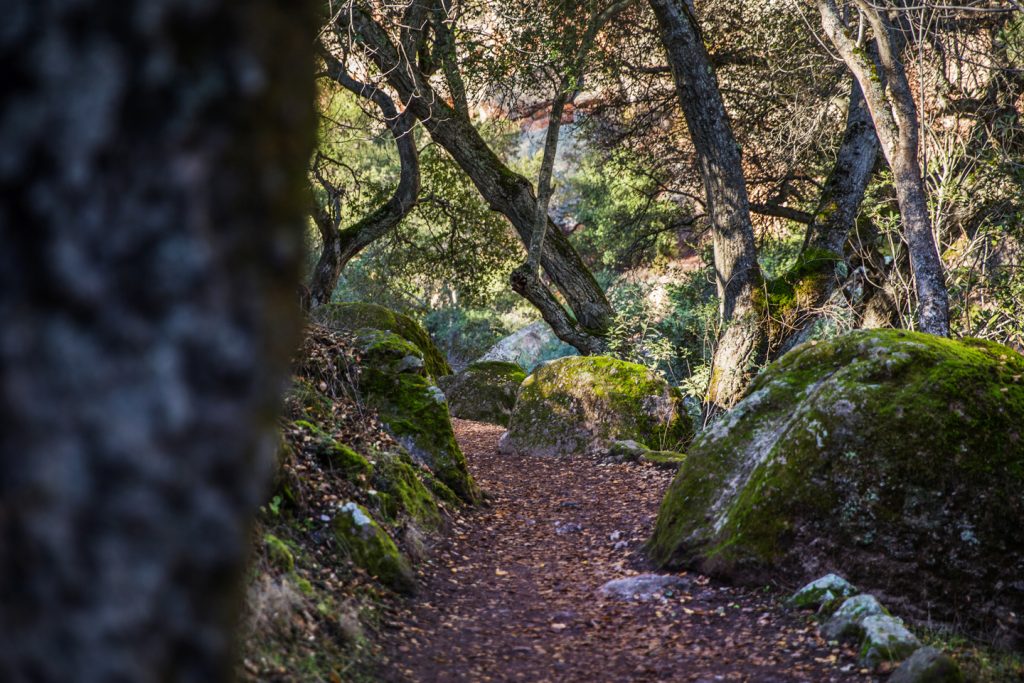 The trail to Bear Gulch Caves is an easy one at just 0.7 miles from parking lot number two. Shortly into the hike, you’ll quickly see the namesake pinnacle rock formations alongside the trail. Small climbing signs with a carabiner on them are prevalent throughout the park and it’s easy to see why this park is a climbers’ paradise. I often found myself taking short detours to explore the rocks and look for better views of the park.

Before long, we arrived at the caves which are preceded by a sign that reminds you that caves are dark and slippery! 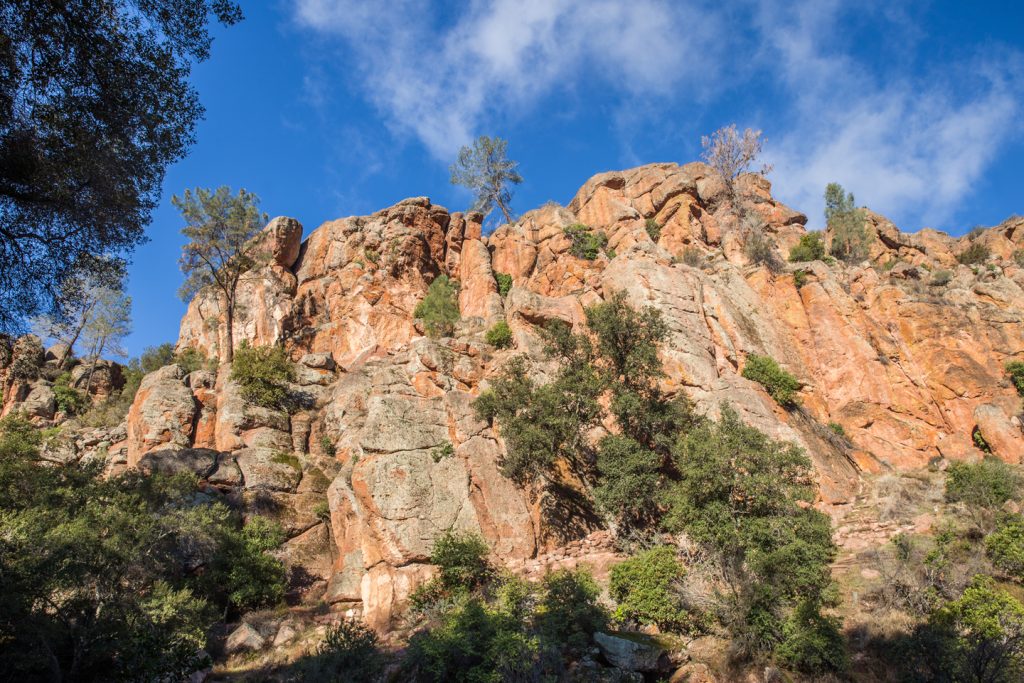 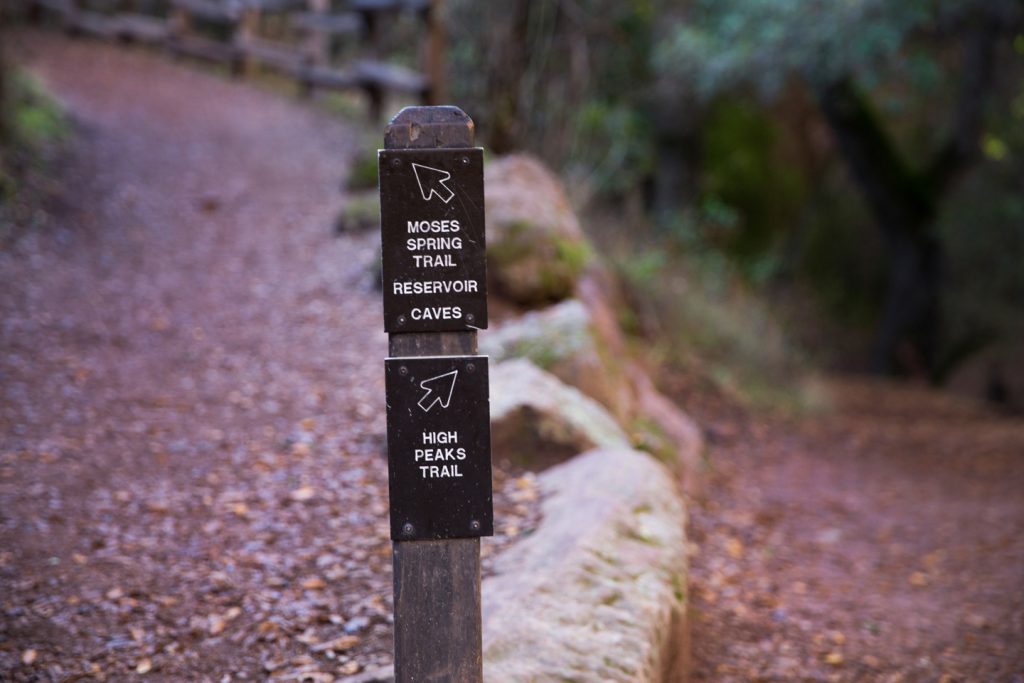 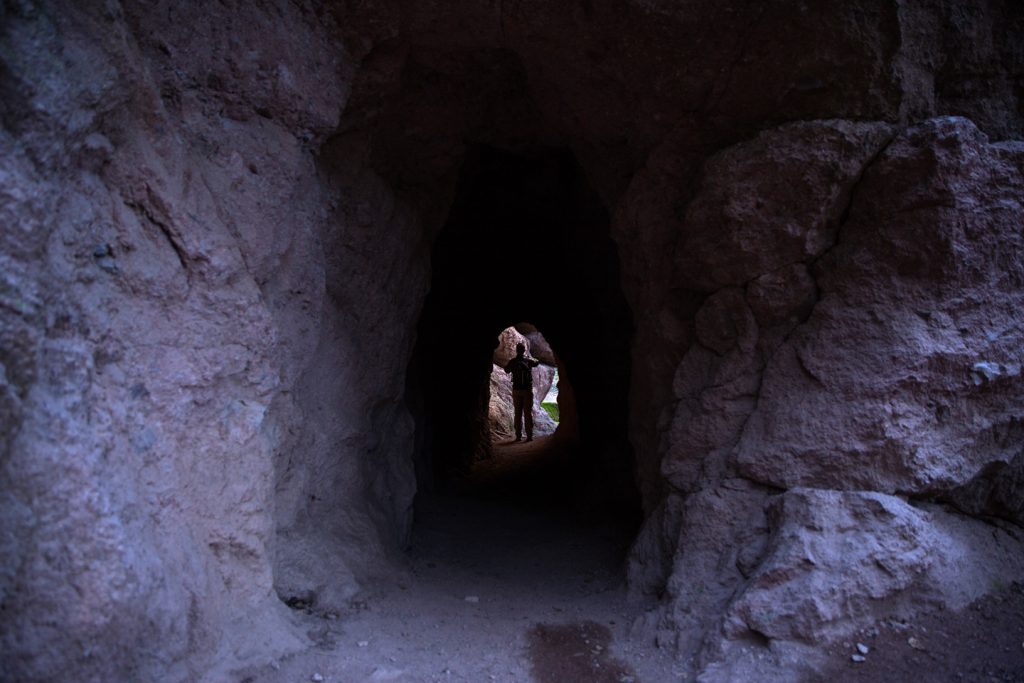 We flipped on our headlamps and made our way into the lower caves which are talus and formed from the large boulders that surround them. This was the first point on our hike that exceeded my expectations. The walk through the lower cave leads you past small streams of water and up stone staircases.

Upper cave was closed on our visit, the result of bat roosting, though they can also be closed due to high water levels. Be sure to check the park’s website in advance to confirm any closures. Several portions of the trail are narrow and some require ducking down to get by. 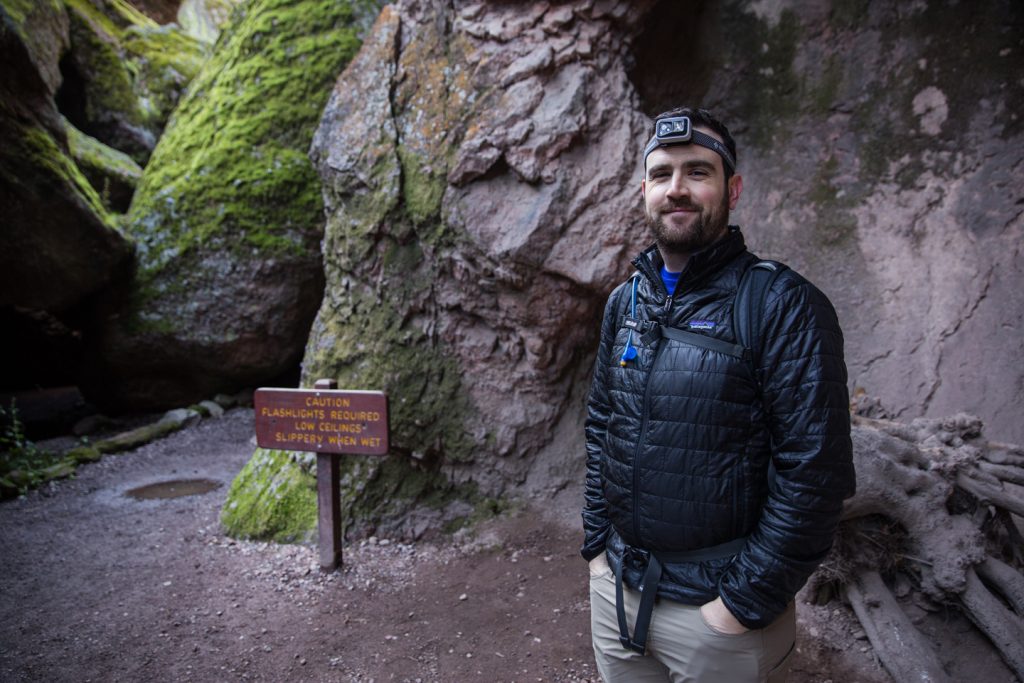 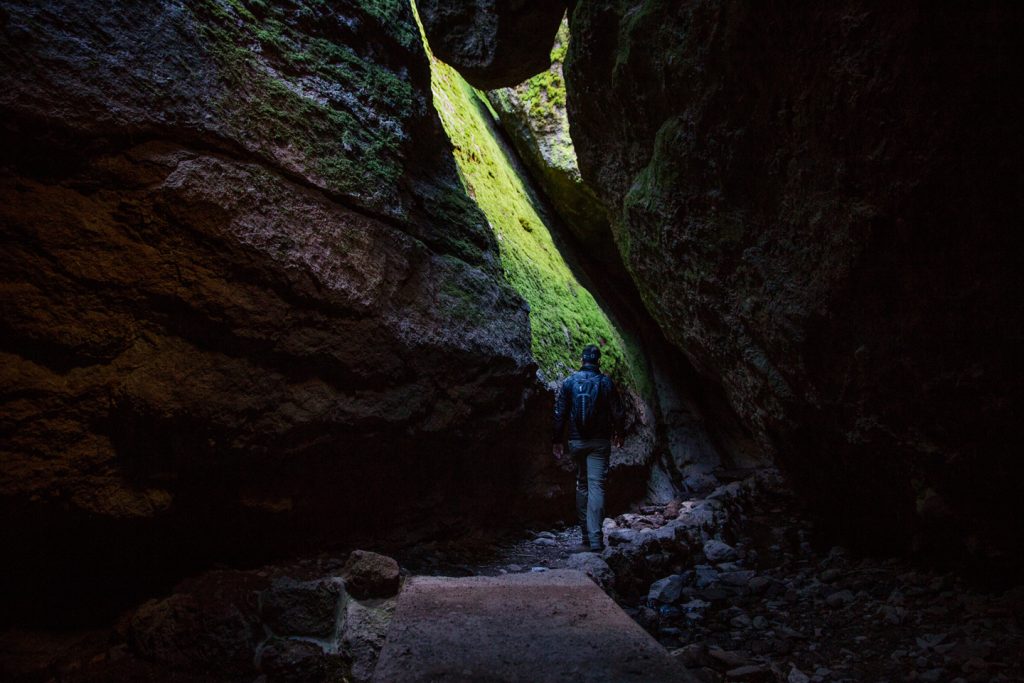 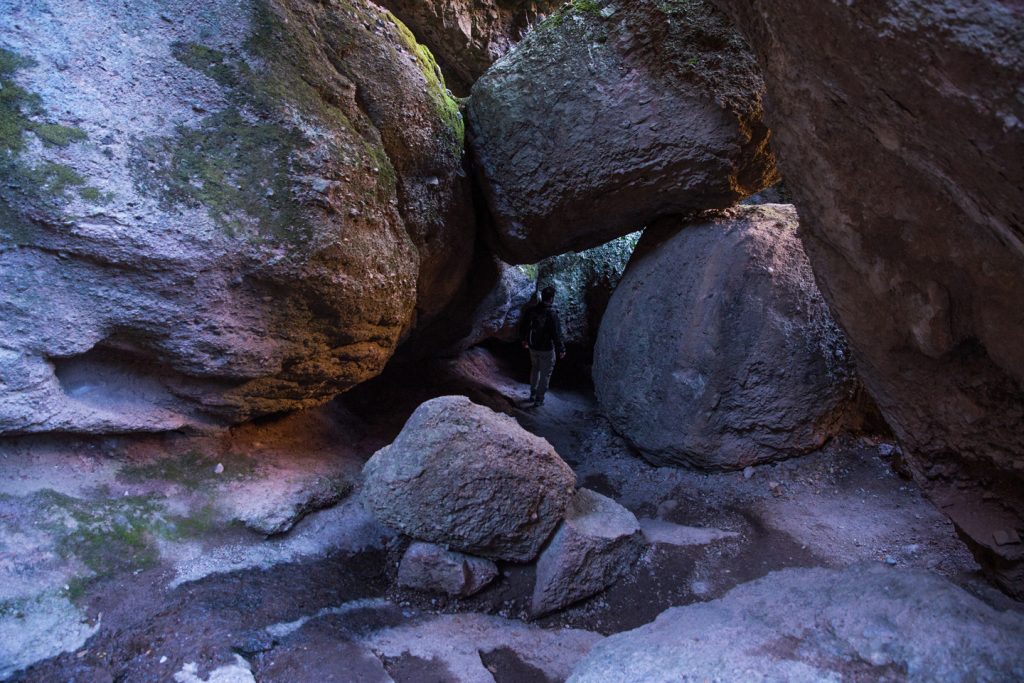 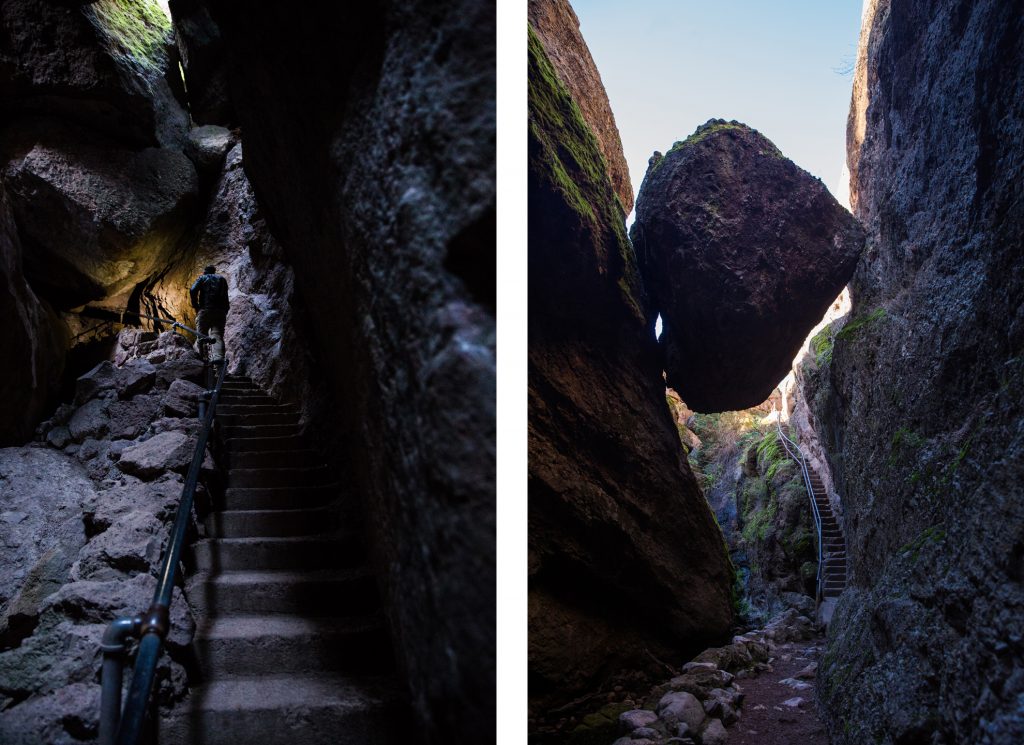 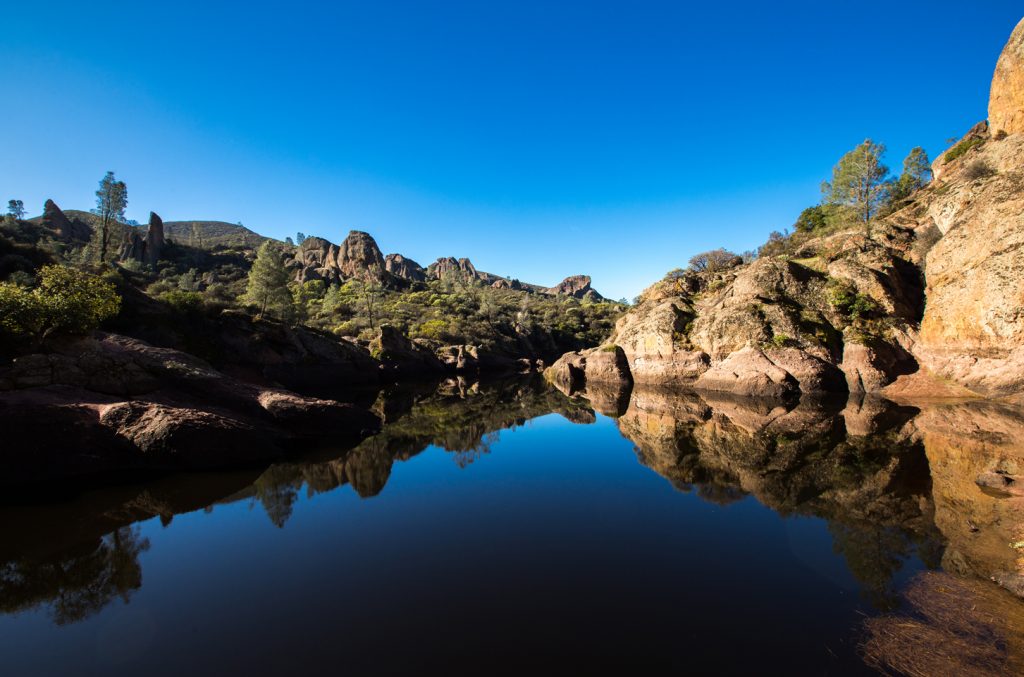 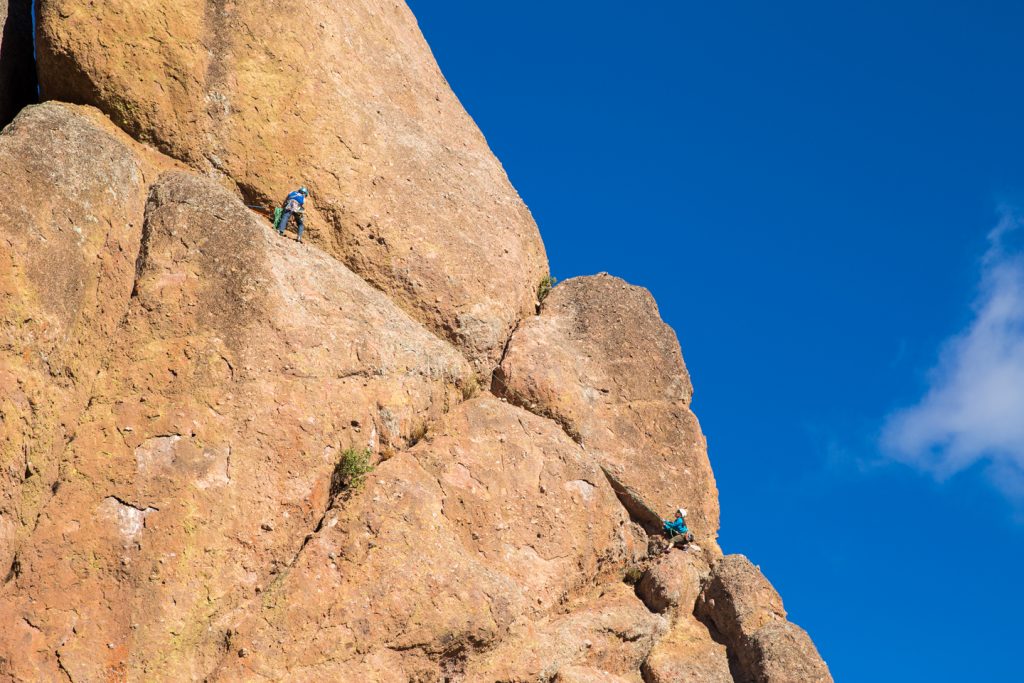 Passing under a large boulder stuck between two rock walls, we arrived at a set of stone steps that led out of the caves. Once we reached the top of stairs, we were greeted by the sight of the Bear Gulch Reservoir, a small body of water surrounded by pinnacles.

We spent some time here taking photos, enjoying the views, and marveling at the rock climbers enjoying their day. Remember that as tempting as it is when water is present, there are posted ‘no swimming’ signs. There was a group who took advantage of the fact that the park rangers were not working that day, and cavalierly waded into the water for some photos. (Pinnacles Hiking) 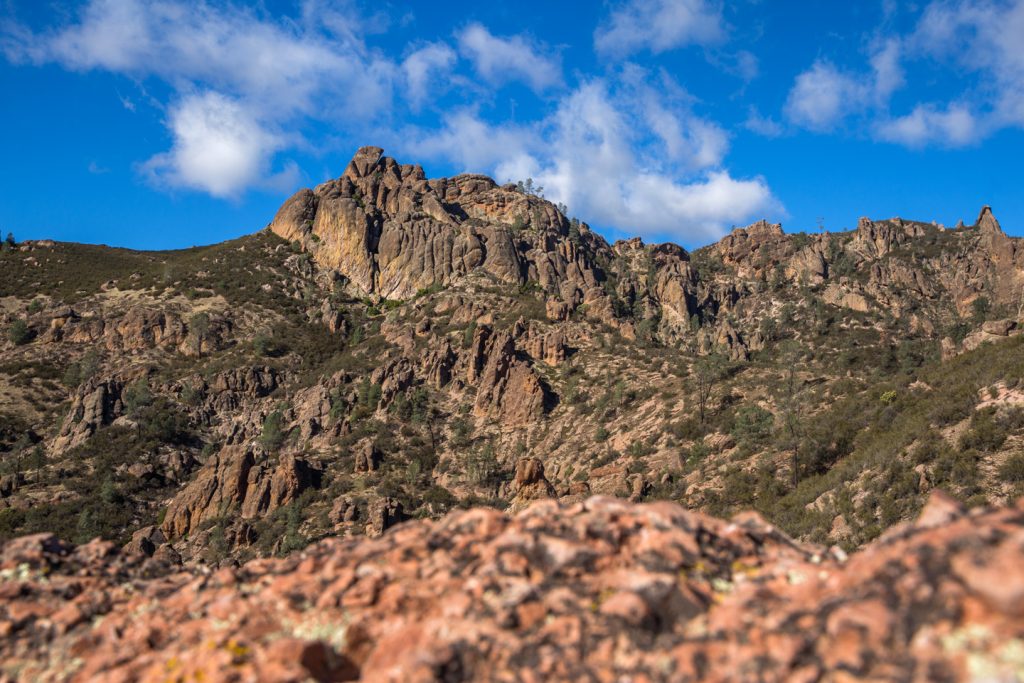 If the reservoir is your main goal, you can turn back here and head back the way you came. For those in search of more adventure, as we were, follow the sign for the ‘Rim Trail’ and start heading up.

About a half mile along the Rim Trail you will arrive at a junction to split on to the ‘High Peaks Trail’ (Note: At this junction you can also turn back to the parking lot if you are looking for a shorter adventure, and did not want to double-back through the caves).

The trail gradually climbs alongside the pinnacles, with views in every direction. A small series of switchbacks will eventually lead to Scout’s Peak, a great place to stop for lunch as we did. There is a bench here and views 360 degree views as well as an outhouse restroom. Of course, there were quite a few groups resting at this spot, so the bench was taken. Instead, so we found our own little secluded lunch reprieve among the rock formations. (Pinnacles Hiking) 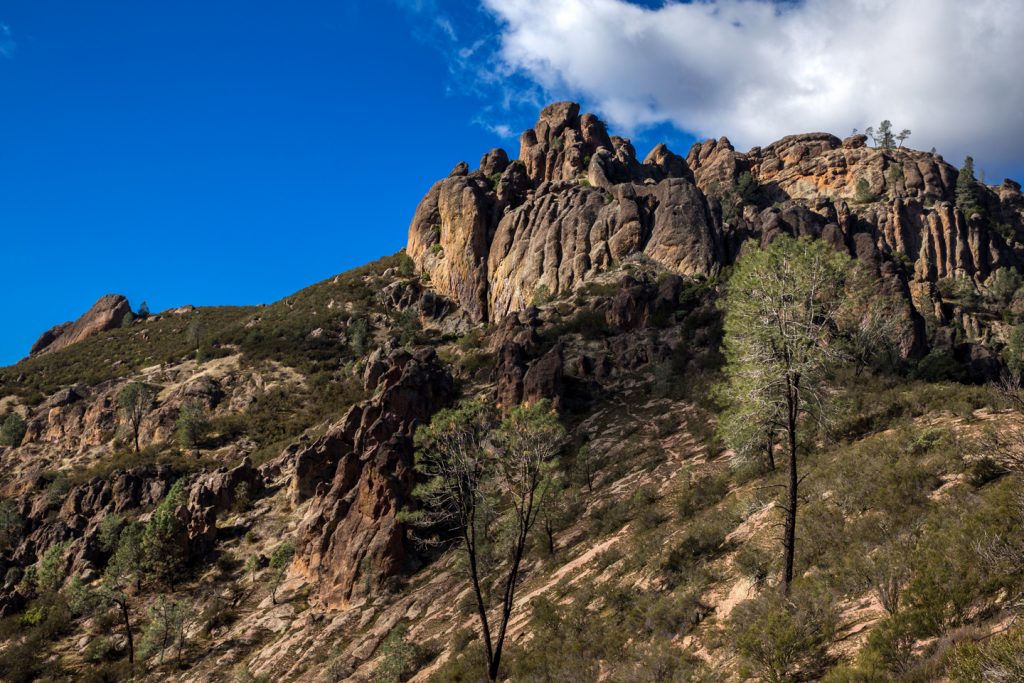 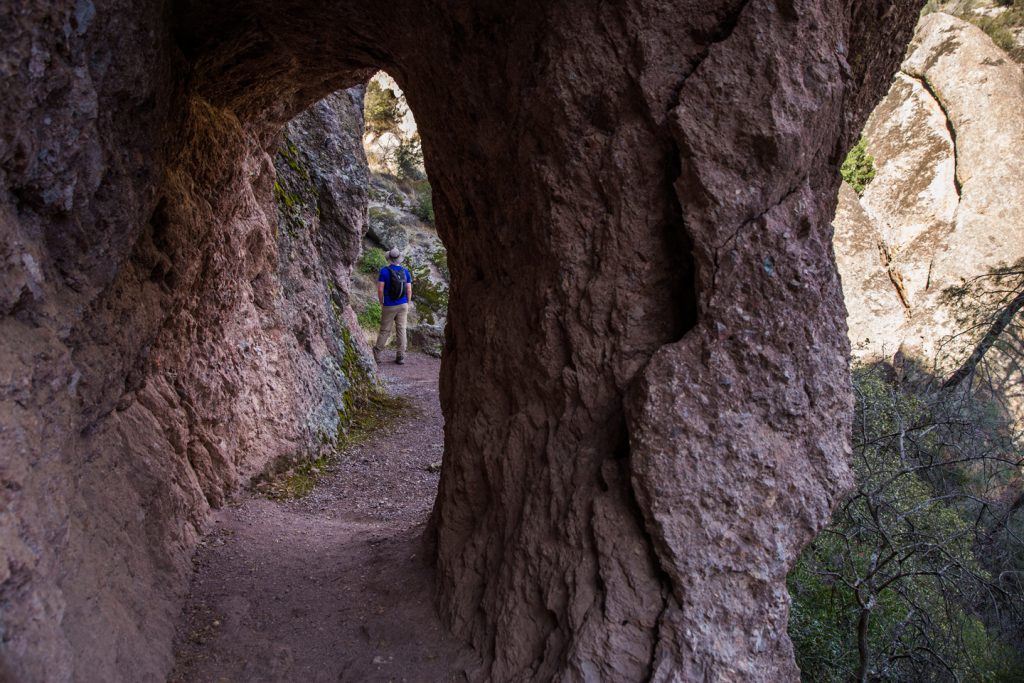 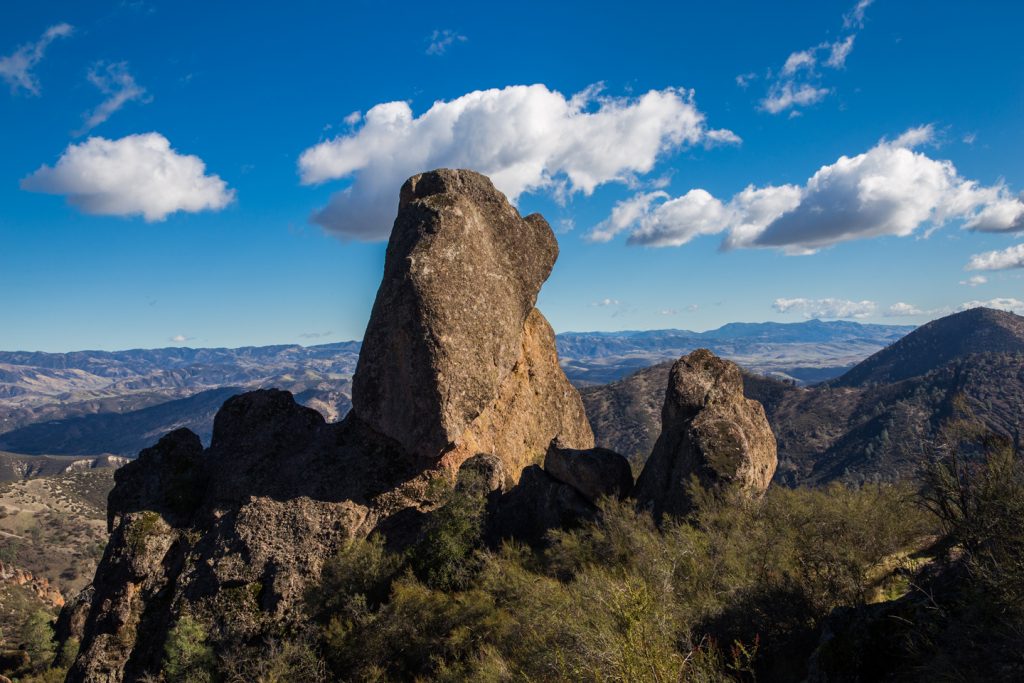 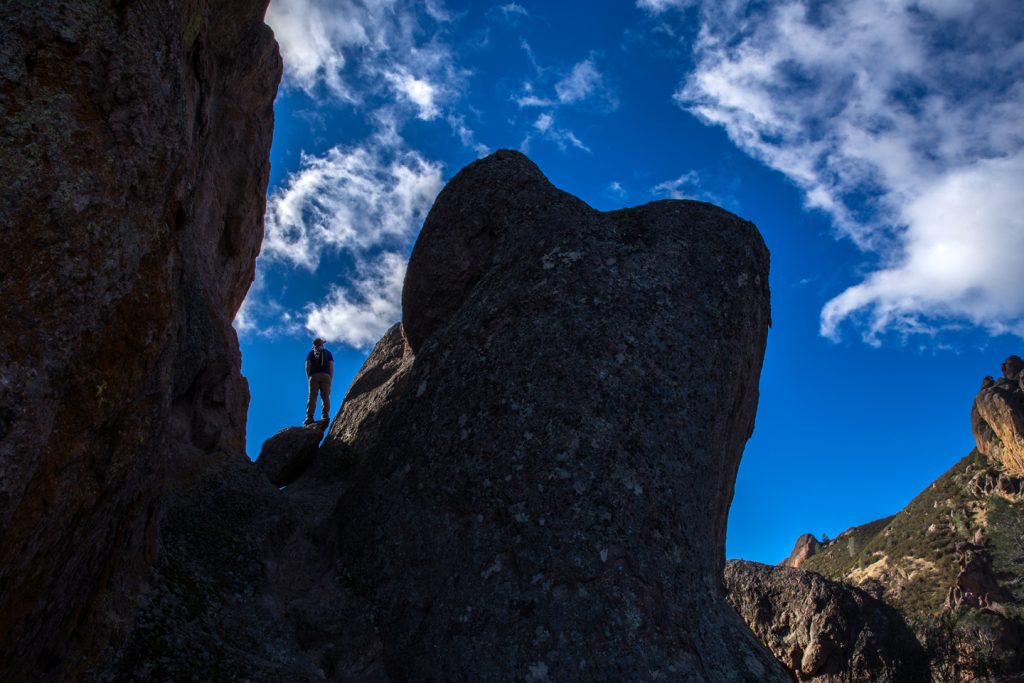 After refueling with lunch, we followed the sign to continue along the High Peaks Trail which references it as “steep and narrow.” A short time later, we came to realize that sign is perhaps one of the more accurate ones we have come across while hiking. The first portion of the trail is pretty straightforward, and at one point, we even thought we were just going to be heading back down to the car without any incline, but boy were we wrong! As the trail begins to switchback up into the pinnacles, we found ourselves walking on stone steps alongside the rock.

From there, a hand rail is in place to help you up the steps and it felt as though we were back at Angel’s Landing for a bit (without the sheer drop offs). We continued walking along a small wooden bridge, and then squeezed past a narrow section between two rocks before heading back down a set of stone steps. (Pinnacles Hiking) 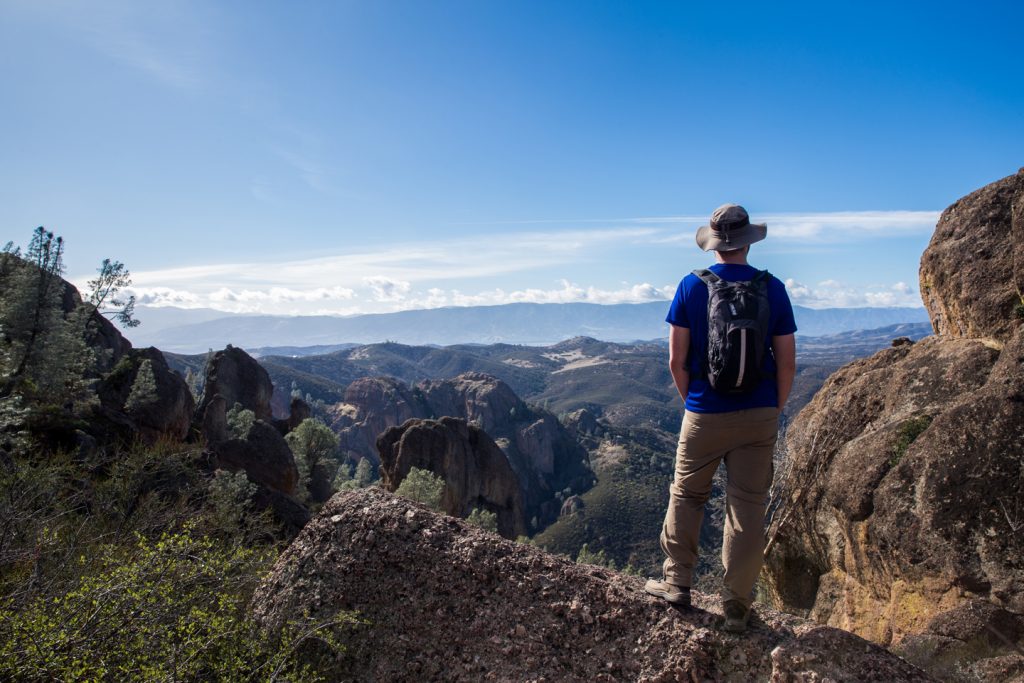 From this point, the last 2.3 miles are relatively easy as the trail begins to gradually descend. Back at the trail head, it’s another 0.5 mile to parking lot number two. 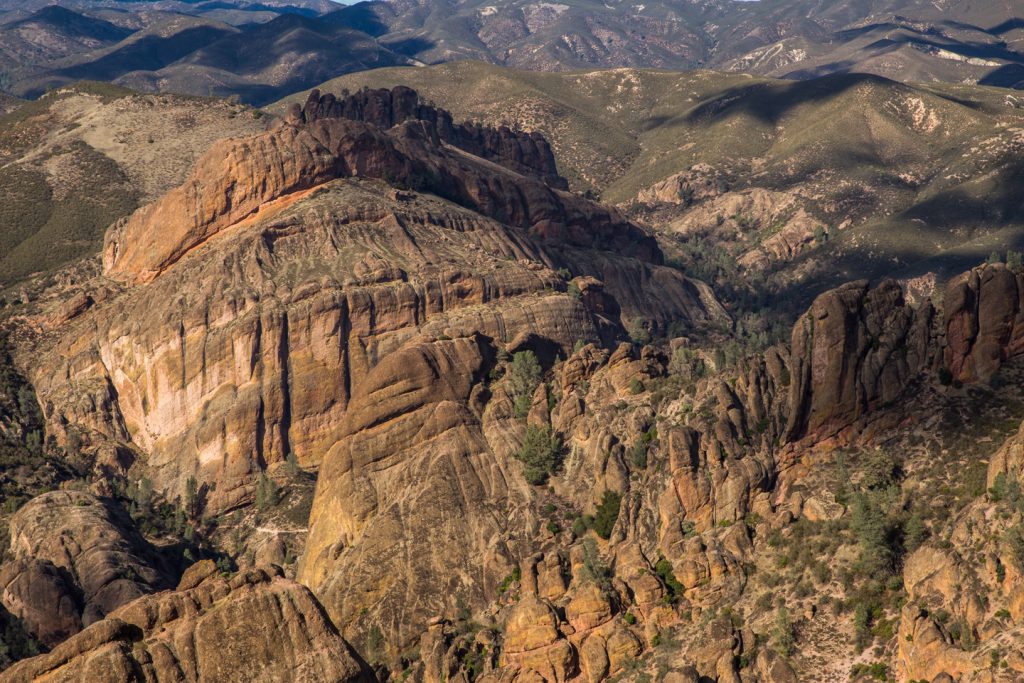 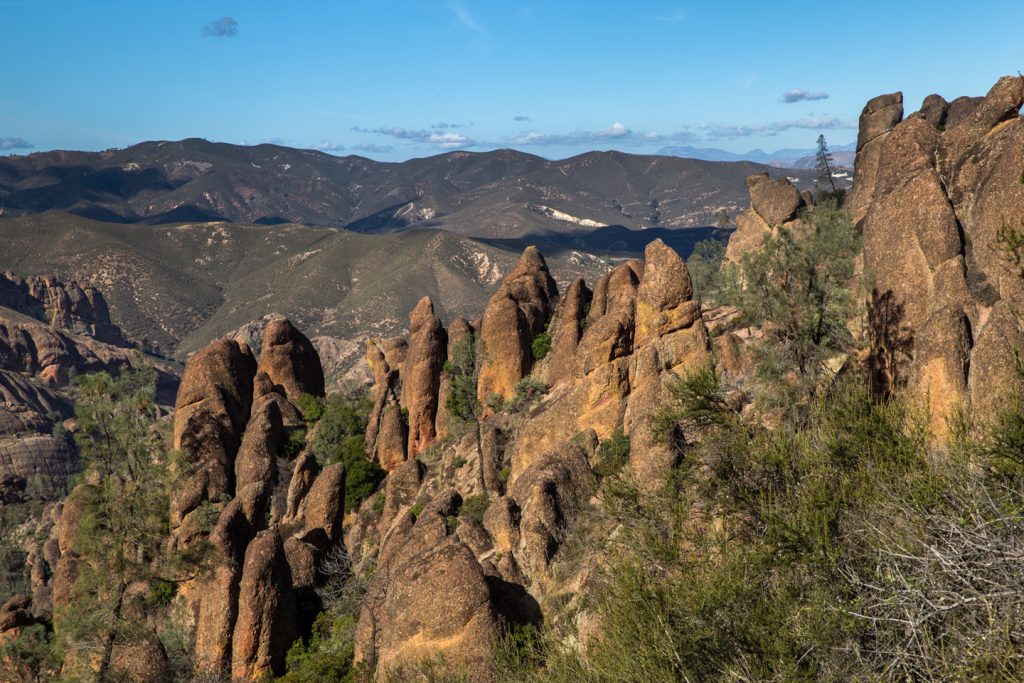 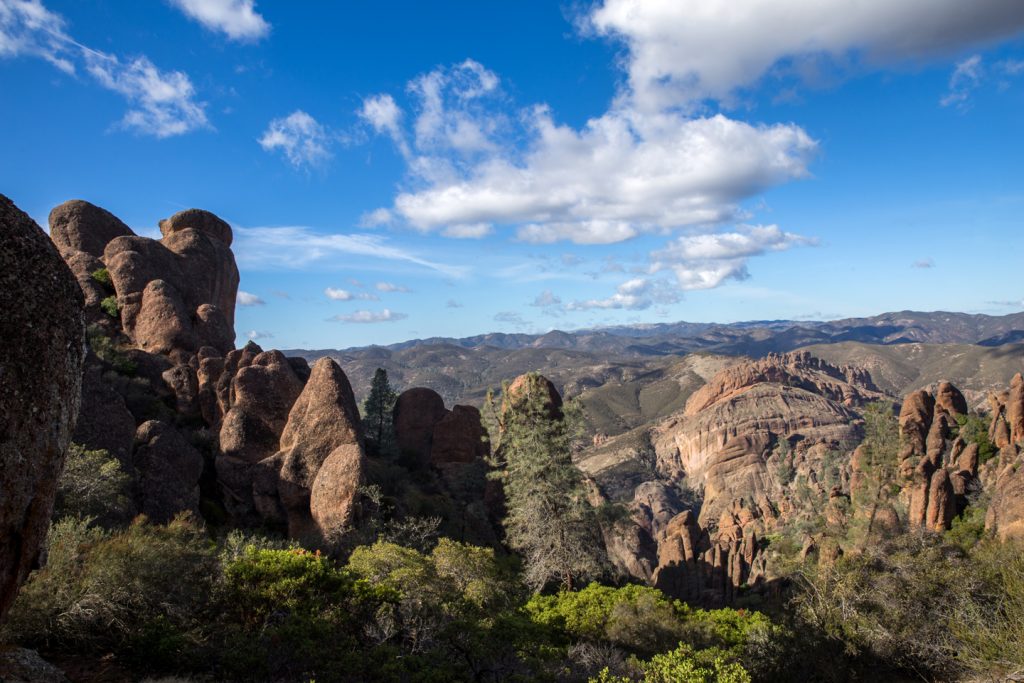 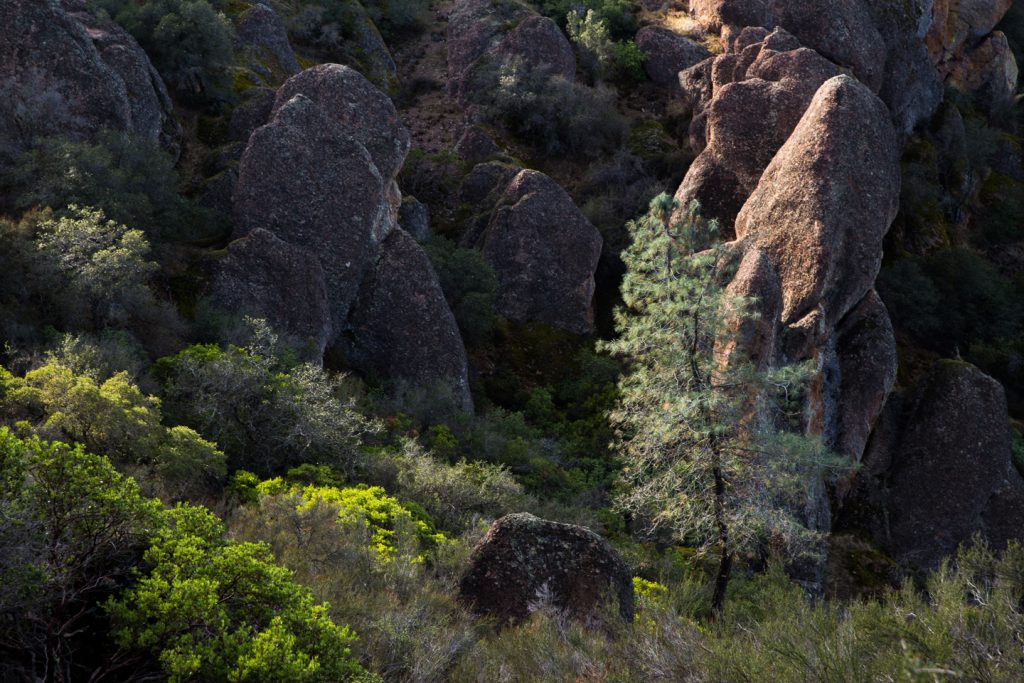 I can safely say that Pinnacles exceeded my expectations and reminded me that our National Parks are special for a reason. Each park provides something unique and is worthy of a visit to appreciate its beauty. We had a great time visiting Pinnacles and will definitely be back again. (Pinnacles Hiking) 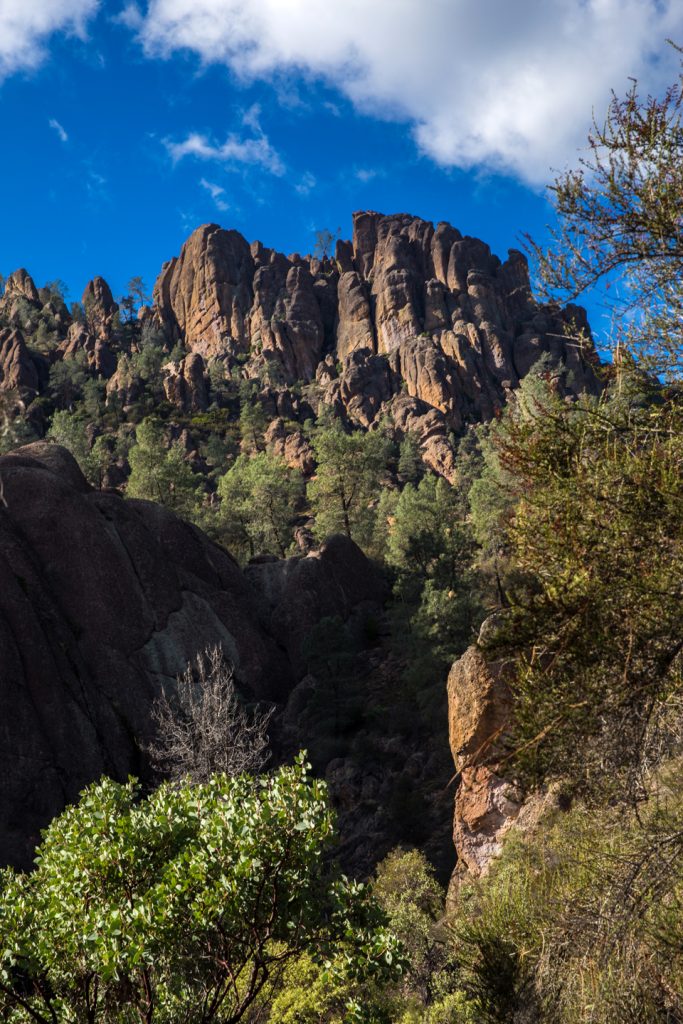 Have you been or are you planning to visit Pinnacles National Park? Let us know in the comments! 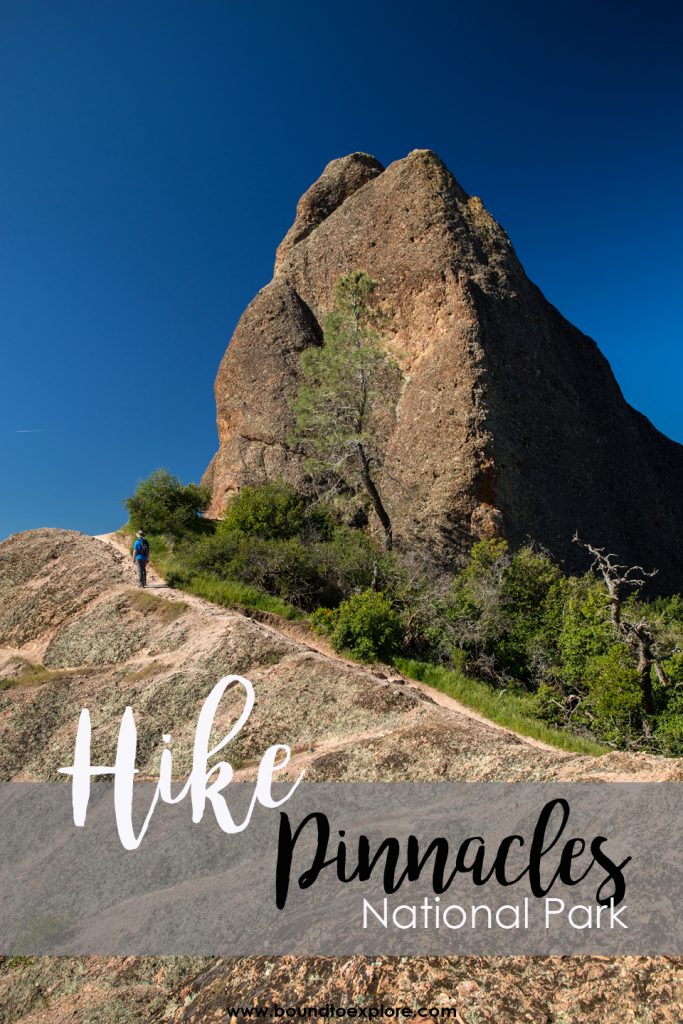